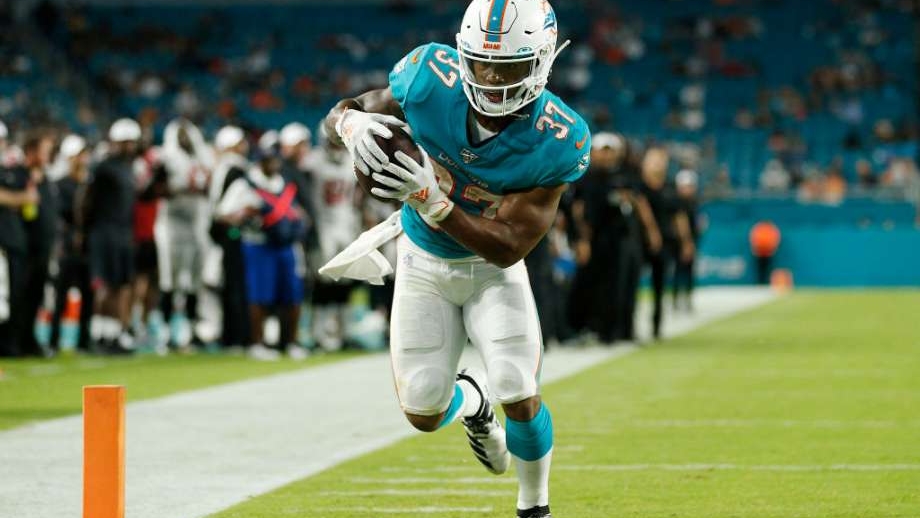 Through four weeks, the best Dolphins running back isn’t the player many (including myself) expected. Myles Gaskin leads the team in running back snap share, touches, rushing yards, and receiving yards. Oddly, goal-line back Jordan Howard totaled 18 carries for 14 rushing yards and three rushing touchdowns. If Gaskin received one or two of those rushing touchdowns, then that would increase his total fantasy points. On the season, Gaskin averages 12.1 fantasy points per game (No. 28) while ranking 27th with 192 rushing yards and 11th with 113 receiving yards. He fits the PPR running back profile with the 4th most receptions (18) on 20 targets (No. 6).

One piece of data to look at for running backs includes snap share, opportunity share, and weighted opportunities. Through four weeks, Gaskin logged a 65.5% snap share (No. 14), 60.2% Opportunity Share (No. 17), and 60.2 Weighted Opportunities (No. 13). Opportunity Share indicates the percentage of the team's total carries and targets amongst running backs. Weighted Opportunities is another advanced metric that values targets more, hence the top-15 Weighted Opportunities score for Gaskin. In terms of red zone touches, Gaskin totaled 15 through four weeks (No. 6). According to Ben Gretch’s Stealing Signals article, Gaskin averages six high-value touches per game (No. 6) amongst running backs sandwiching him between Aaron Jones and Clyde Edwards-Helaire. Ben Gretch defines high value touches as those that a player receives inside of their opponent's 10-yard line that includes receptions as well. It provides optimism moving forward since Gaskin received touches in the red zone and inside the 10-yard line.

Although many teams likely found Gaskin on the waiver wire, he appears like a sneaky running back to acquire via trade, particularly in PPR leagues. With his usage and zero touchdowns, expect additional touchdown scores moving forward. However, we shouldn’t expect a large number of touchdowns due to the poor run-blocking efficiency and efficiency overall. According to PlayerProfiler metrics, the Dolphins have a 72.6 run-blocking efficiency (No. 32), and Gaskin holds a -21.4 Production Premium (No. 62). Monitor the snap share and opportunities for Gaskin moving forward in hopes of the volume leading to more production, but overall there’s limited upside unless the volume and production increase.

Have you ever rode on a bicycle with a flat tire? Well, that’s exactly how I felt with Chris Thompson in hopes he would take on more involvement in the passing game. I bought into the narrative of Jay Gruden linking up with Chris Thompson again with the potential PPR fantasy goodness while Thompson remained healthy. So excited for Thompson with Leonard Fournette released that I barely considered other options in the Jaguars backfield, assuming negative game scripts and more passing. Then I jumped on to ride the bicycle with excitement for Thompson that noticeably went nowhere only to realize James Robinson received the workhorse running back type opportunities. Enough with the silly analogy as I attempted to replace hype train with hype bicycle, let’s look at Robinson as an unexpected fantasy football contributor. 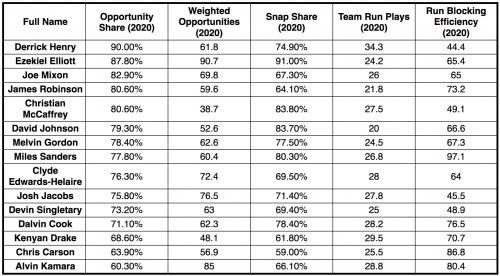 The main point of noting James Robinson here is to recognize his fantasy production through four weeks. As an undrafted free agent out of Illinois State, Robinson had a 48.7% College Dominator Rating (97th percentile), 127.5 SPARQ-x Score (89th percentile), and 130.5 Burst Score (92nd percentile). Through four weeks, Robinson notched an 80.6% Opportunity Share (No. 4), 59.6 Weighted Opportunities (No. 14), and 19.1 PPR points per game (No. 9). He receives a workhorse role in the Jaguars offense that runs 21.8 team run plays per game (No. 30), meaning it looks like the correct process for drafting Fournette earlier in draft season. Robinson ranks 8th with 285 rushing yards, 2nd with 161 receiving yards, and 10th with 6.0 yards per touch, meaning he provides the fantasy production given the volume. Interestingly, Robinson has a +33.2 Production Premium (No. 11) with a 73.2 run-blocking efficiency (No. 29). When seeing that, it makes us look at yards created and evaded tackles. According to PlayerProfiler, Robinson ranks 8th with 23 evaded tackles and 9th with 130 yards created.

As an unexpected fantasy football contributor, James Robinson continued to rise in the rest of season PPR rankings. Before the 2020 season, Robinson was probably a Week 1 waiver wire pickup or a late-round draft pick in deeper leagues. Witnessing Robinson in the NFL makes us wonder how he went undrafted outside of playing in the Football Championship Subdivision (FCS). Heading into Week 5, Robinson looks like a league winner and a buy high trade candidate if hurting at running back. Robinson checks several key boxes with the 64.1% snap share (No. 14), 80.6% Opportunity Share (No. 4), 59.6 Weighted Opportunities (No. 14), and 23 evaded tackles (No. 8). Buy, buy, buy (not the *NSYNC song) with James Robinson.