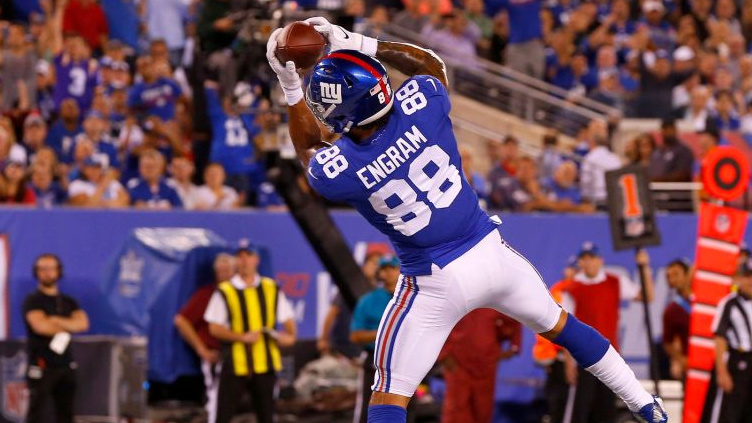 There isn't much to discuss regarding the Cowboys at this juncture of the offseason for fantasy purposes.  They swapped out Cole Beasley for Randall Cobb in an offense that hasn't consistently featured the slot receiver over the last two seasons.  That could change with new coordinator Kellen Moore, but Cobb's injury history keeps his value suppressed even if things change.  For now, this is a wait-and-see situation.

Beckham Jr. is leaving 29% of the targets up for grabs (based on per game average).  It will be interesting to see how Golden Tate, Sterling Shepard, and Evan Engram divide that.  Tate and Shepard are similar weapons that work well underneath and out of the slot but neither is an every-play threat to take the top off of the defense like Beckham was.  Based on this I don't see either of them taking on 100% of his role.  Last season Shepard finished with an 18% target share and Evan Engram came on down the stretch once healthy (20% and 30% weeks 14 and 15).  Of course, we can't forget the 21% that Saquon Barkley demanded.

Given the balanced nature of Shurmur's offense and no true replacement for Beckham's route tree versatility, we are probably looking at a scenario where each player is around 18 to 20% in targets at year-end.  Any given week one of them could hit the 10% or 30% mark depending on the game plan.  For fantasy purposes, 18 to 20% isn't great for wide receivers, but for tight ends and running backs, it is very viable.  Engram could creep into the top five if things go right - important situation to monitor this summer.

The signing of DeSean Jackson brings back the vertical element missing from the Eagles attack last season with the early Mike Wallace injury.  From a fantasy perspective, this is more about Carson Wentz than Jackson.  Jackson's speed will open up more room underneath where the Eagles offense makes its money.  This is good for Zach Ertz who should have more room to operate.  As for Jackson, I don't see more than 45 or 50 balls max given the structure of this offense.  Of course, he will have his big games over 100 yards with a TD on four catches.

The loss of Nick Foles could come into play this fantasy season given the injury history of Carson Wentz.  Foles has insulated fantasy owners of the Eagles' skill position players when the Wentz injury bug has struck.  This probably doesn't change draft strategy much, but the floor has been lowered slightly on all Eagle skill guys now.

Re-signing Adrian Peterson provides the Redskins with an insurance policy should Derrius Guice have any issues in his ACL recovery.  Even if Guice is recovered I do expect this to limit his upside in touches.  Peterson played well for the team last season and will spell Guice at times.  The question is how often?  Will it be an every third series type of thing or might Peterson also carve out a situation role such as short yardage?  This is an important situation to monitor.

Bringing in Case Keenum keeps this team from being a complete fantasy wasteland.  While he isn't the greatest quarterback from NFL standards, he is willing to push the ball down the field into tighter windows than Alex Smith.  That can provide more opportunity for the Redskins' outside pass catchers (Josh Doctson and Paul Richardson).

With Jamison Crowder departing for the Jets, the Redskins have a hole to fill at slot receiver.  Last season, seventh-rounder Trey Quinn (LSU transfer to SMU) showed some promise before getting injured.  It will be interesting to see what else Washington does to address this spot.  If nothing significant, Quinn could be the sneaky player to own on this team.