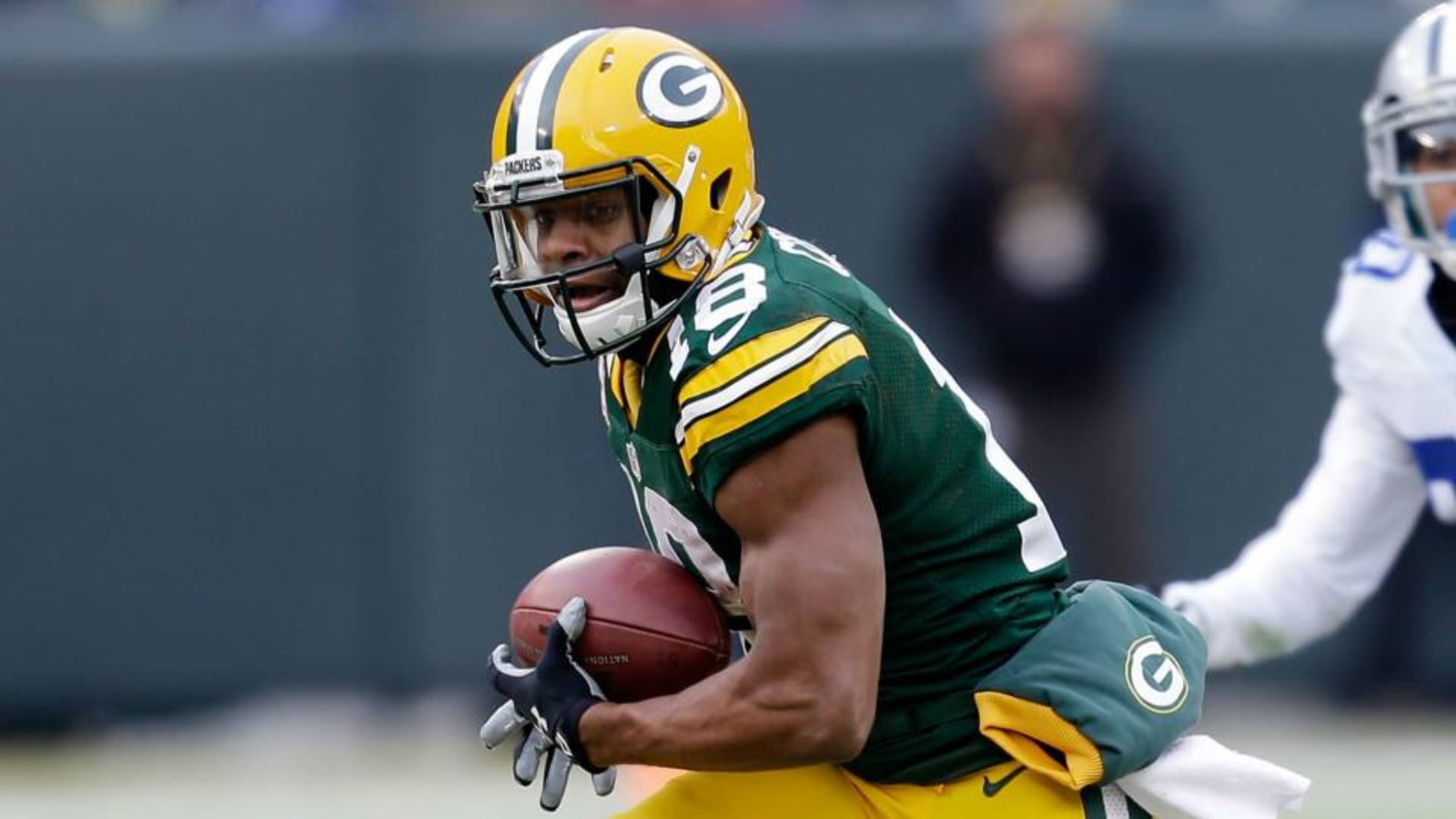 Here are the Fantasy NFC Training Camp Notes from 8-4. Enjoy!!

The Falcons have two tight ends in Austin Hooper and Eric Saubert who have shown they can be assets in the passing game. And that’s been something on display throughout OTAs and the first part of training camp. On back-to-back plays, Matt Schaub targeted Hooper, both resulting in completions for the red team.

Saubert was one of Matt Ryan’s main targets. If Ryan wasn’t going to Mohamed Sanu or Calvin Ridley, he was throwing the ball Saubert’s way. Ryan and Saubert cashed in for a touchdown, giving the white team their first touchdown of the day.

Michael Gallup has so far been the talk of training camp. After every practice, your twitter feed is probably flooded with videos of Gallup doing something good, and that’s exactly what the Cowboys need out of their third-round pick. As we all know, the Cowboys don’t have a bona fide WR1 on their roster, but Michael Gallup may put those rumors to rest if he keeps up the pace he’s on. Gallup brings a big catch radius, raw but nuanced route running ability, and good, consistent hands.

Gallup’s biggest issue is staying focused and getting better each day. Dating back to the Senior Bowl, Gallup has mentioned that he has a problem with staying focused and practicing at a high level consistently. Gallup has done a tremendous job so far making plays when given the opportunity. Through two weeks of practice, it isn’t a stretch to say that Michael Gallup has been the best receiver on the field, he just needs to continue to progress every day.

Allen Hurns said he’s been out of practice as a precaution because of groin tightness. He expects to at least do individual today. Sean Lee expected to get into padded practice for first time this camp.

Cowboys WR Deonte Thompson is dealing with a strained Achilles and isn't likely to practice this evening. He didn't practice Thursday ahead of the off day Friday.

Matt Cassel and Jake Rudock continue to battle in camp for the backup quarterback spot behind Matthew Stafford. Both had good and bad moments Saturday. Cassel led the only touchdown drive for the offenses hitting Hakeem Valles, Brandon Powell and Sean McGrath on passes that set up the Redding touchdown. Cassel also made a nice throw to Valles after the touchdown to convert the two-point try. Earlier, however, Cassel mishandled a snap in the end zone and gave up a safety.

Rudock made a number of plays with his legs, including a nice scramble up the middle on a 3rd and 12 that preserved a drive and helped set up a short field goal try. He also hooked up with Theo Riddick on a big play down the left sideline to set up a field goal. Rudock also underthrew a ball intended for TJ Jones that should have been picked up by Darius Slay, but fell incomplete.

The official word on WR Randall Cobb is an ankle injury. He dropped out of Friday's practice, went inside to get it looked and then returned to the field but never practiced again. He's watching from the sidelines tonight and doesn't appear to be having any issues moving.

McCarthy confirms the injured ankle for Cobb is the same one he had a procedure on this summer.

Davante Adams and Kevin King continue to have a spirited battle in one-on-ones. King had perfect coverage on a sideline ball and then Adams froze King at the goal-line and broke inside for an easy TD.

Some thoughts from 1 on 1s between WRs/DBs: * A couple nice reps for CB Josh Hawkins, who forced a WR out of bounds and also had a PBU * Geronimo Allison had a sweet move on Tramon Williams for a short TD * Jaire Alexander with a textbook PBU on J'Mon Moore in the end zone.

Like yesterday, Tim Boyle once again first #Packers QB onto the field after Aaron Rodgers. Just barely missed rookie J'Mon Moore on go route down left side. Looked like it should've been caught. Moore had a step on Jaire Alexander.

Rough drop from Valdes-Scantling in the end zone on a deep ball from Hundley. Perfectly placed. Gotta haul that one in.

Marquez Valdes-Scantling had a drop. J'Mon Moore had a drop. Equanimeous St. Brown got stripped. Yet Jake Kumerow continues to catch everything thrown his way. As Aaron Rodgers said of Kumerow, "If you’re playing today, you’d like him on the field."

TE Gerald Everett has a shoulder sprain. Could be out at least a week. Lamarcus Joyner should practice Monday, McVay said.

Dalvin Cook and Roc Thomas are not dressed out. This is the first practice of training camp where Cook is being held out.

Giants wisely keeping Saquon Barkley out of current team drill. A lot of banging around with the big boys at the goal line. Unnecessary for the rookie in training camp. Jonathan Stewart and Wayne Gallman in there with 1s.

Random thoughts from #Giants camp this week ... 1) Janoris Jenkins is back to 2016 Janoris Jenkins 2) Rutgers RB Rob Martin is going to give himself an opportunity to impress in preseason if reserve line finds some consistency 3) Darian Thompson is quietly having a good camp.

RB Joe Williams has run with more urgency during training camp this summer. And he appears more willing to sacrifice his body and take the hits required from the position.

“Joe wasn’t quite as ready last year and that does make you wonder, because you can’t succeed if you don’t have that mindset,” Shanahan said. “But I’ve seen it this year. I saw it in the way he worked and I feel that he fixed his body, got a lot more muscle and got in better shape.

“But you really never know until you put the pads on because he showed it in OTAs and we’ve had the pads on for a while now and it’s been what we were hoping to see. Hopefully it will continue over to games.”

Williams is likely to compete against special-teams ace Raheem Mostert for the job as the 49ers’ No. 3 running back behind Jerick McKinnon and Matt Breida.

Russell Wilson on WR Brandon Marshall after their TD pass in #Seahawks mock game: “He still has it.” @thenewstribune

Ex-Cardinals WR Jaron Brown, getting prime chance with Baldwin, Moore, Darboh out, has about a half-dozen catches from Russell Wilson in this #Seahawks mock game. Last one got behind 2nd D for a TD grab.

RB C.J. Prosise, ex-Notre Dame WR, two drops in this mock game. One went off him for McDougald INT. Other one off his hands and chest in end zone to end drive instead of TD.

Rookie TE Will Dissly showing in this #Seahawks mock game what he’s been showing thru 8 days of training camp: he can catch the ball. Especially for an ex-defensive lineman.

Russell Wilson says of rookie TE Will Dissly, #UWHuskies DL until couple yrs ago: “He’s been, in my opinion, one of the stars of camp...he keeps showing up.”

Russell Wilson and the No. 1 offense moved the ball well, scoring four touchdowns on as many possessions. Wilson completed 16 of 19 pass attempts and threw touchdowns to Chris Carson, Jaron Brown, Brandon Marshall and Keenan Reynolds. Wilson’s first pass of the day found an open Carson, who the defense lost as he came out of the backfield, resulting in a 65-yard score down the sideline.

In addition to Carson’s big touchdown catch, the running backs had a number of big plays. Rookie Rashaad Penny was one of the bright spots for the No. 2 offense, breaking off two long runs, both down the right sidelined, and Mike Davis continued a strong camp with a couple of nice runs.

“Mike’s had a really good camp, he has been very effective,” Carroll said of Davis “… Mike has been very elusive, he’s been consistent, he has been versatile, catching the football, running routes, blocking, all of that. He’s a tough guy and a terrific competitor, so he has done very well.”

On Saturday, Brandon Marshall had another touchdown catch from Wilson, hauling in a long reception down the sideline despite solid coverage from rookie Tre Flowers. Later in practice, Marshall showed he’s willing to do the dirty work to, putting a nice block on a cornerback to spring Brown for a nice gain on a bubble-screen. Marshall, a six-time Pro-Bowler, is looking more and more with each passing day like someone who can really help Seattle’s offense.

Jaron Brown, a free-agent signing this offseason, continued what has been a strong camp with a great performance Saturday, catching a game-high six passes, including a touchdown from Wilson. Early in that drive, Brown had a catch on third down to move the chains, added another big gain near midfield, then capped the drive with a 43-yard touchdown catch.

On the second play from scrimmage in the red zone, quarterback Ryan Fitzpatrick hit tight end O.J. Howard over the middle for a score, the first red zone score in a while for the first team.

Usually we only see one or two successful red zone trips per practice, as the defense has gotten the better of the offense to this point of camp. But today the offense took the momentum of their first touchdown and just kept scoring. Their second score came from the feet of Ronald Jones, who was getting some reps in with the first team.

And finally, quarterback Ryan Griffin hit wide receiver Justin Watson on a nice slant pass for six points. Watson had a couple of touchdowns on the day, the one shown above being his first. He’s putting on quite the performance in camp thus far. How he performs in the preseason games could give this coaching staff a serious debate of which wide receiver to keep for the fifth spot.

And to end practice on a good note, Fitzpatrick and the first-team offense loaded up a deep bomb pass to wide receiver Chris Godwin who, like he always does, delivered with a touchdown.

Josh Doctson is out stretching today. Jay Gruden said that he will take some reps today but he won't be a full go after the shoulder injury.

Jordan Reed beat Swearinger for a touchdown over the middle and DJ wanted a flag. There may have been a little contact but No way is Reed getting flagged for that.

Alex Smith's legs made a difference in the red zone. He ran a bootleg to the right and had RB Byron Marshall for a possible score in the front corner of the end zone. But CB Josh Norman was there. Instead, Smith sprinted into the end zone. It was there.