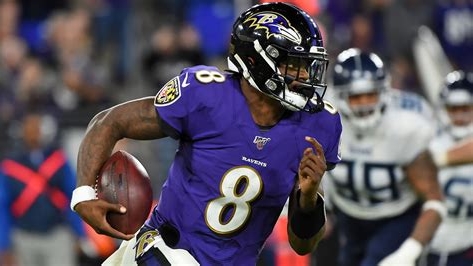 We made it! Let's take a look at some of my favorite DFS targets for Week 1. It should be a heckuva weekend and the only thing that could make it better is winning some cash in DFS!

We'll use DraftKings prices and quickly rundown some of my favorite plays and game stacks for this weekend. Let's start with quarterbacks and work our way through the skill positions.

All signs point to Russ absolutely cooking in this matchup against the Falcons. He’s notoriously efficient, has talented receivers and provides an elite rushing floor. We also have a close line (SEA -1.5) and a high projected total (49) that could very well lead to a shootout. 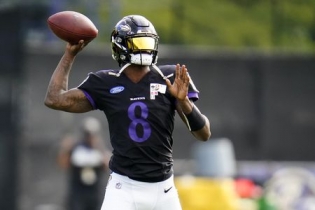 The reigning MVP comes in at a reasonable price to open up the 2020 season and is poised to kick things off in a big way. In his two games against Cleveland last season he piled up 485 passing yards, 6 passing touchdowns, 28 rushes and 169 rushing yards. It's hard to see the Cleveland defense slowing Jackson down this week.

I can't believe I'm even saying this, but Bortles - I mean Trubisky may actually be in a good spot against a beatable Detroit defense. He combined for six passing touchdowns in two games against Detroit last season and can get it done with his legs as well. I don't mind him in GPP's and his stacking options are very clear in Robinson and/or Miller. 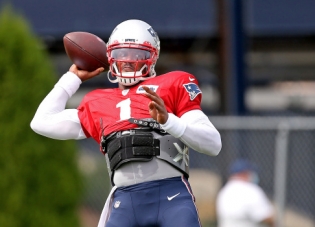 Cam is fully healthy by all accounts and gets a great home matchup against the Dolphins in Week 1. The Patriots offense will run through the former MVP and he should be able to contribute plenty on the ground. I think this is the lowest price that he'll be on DraftKings the entire season and we can take advantage of it this week.

Tyrod gets a friendly Week 1 matchup against the Bengals and offers a solid floor due to his rushing ability. He has excellent weapons in Austin Ekeler, Keenan Allen, and Hunter Henry. He makes a lot of sense as a DFS cash game play - leaving flexibility to spend up at others positions.

Similar to Taylor, Minshew has a fine matchup and offers fantasy-scoring stability with his rushing production. The Colts are favored -8 in most books, likely putting the Jacksonville offense in catch-up mode in the second half. Minshew is poised to pay off his price tag this week.

Mixon heads into Week 1 after signing a four-year, $48 million dollar deal, making him one of the top paid running backs in the NFL. He gets a good home matchup against the Chargers who excel at pass defense but can be beat on the ground. The Bengals should lean heavily on Mixon in Joe Burrow's first career start and I'd be surprised if he didn't get close to 25 touches.

The Raiders return all five starting offensive lineman from last season and the Panthers ranked dead last in rushing DVOA last season. Jacobs averaged over 20 touches per game last season and is set to come out firing in Week 1. Jacobs is likely to be highly owned in most DFS formats but we don't need to get too cute at the running back position. Jacobs looks like one of the best plays on the slate. 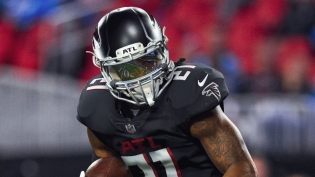 Gurley should be fresh and enters Week 1 with a solid home matchup against the Seahawks. He's the clear candidate for red zone carries in a home game with a high total. Gurley looks set for success in his Falcons debut and has a good chance to get into the endzone.

Ekeler has established himself as one of the most efficient players in the league on a per touch basis over the past three seasons. He's poised to be the focal point of the Charger's offense and is such a significant threat in the passing game that he separates himself from other players in full PPR formats like DraftKings.

Gibson comes in at the minimum price and appears to have a promising role in the Washington offense. He excels as a receiver and is the biggest back on this team. According to camp reports, he’s a strong candidate to pick up receiving work and could establish himself as the preferred goal-line option sooner than later.

Mack is flying under the radar across the DFS industry but is in a premium matchup against the Jags and carries a cheap price tag. The Colts have been clear that Mack is their RB1 and he should see close to 20 touches against a bad Jacksonville run defense. 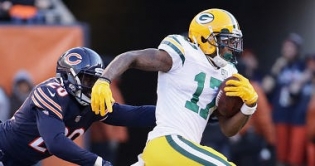 Davante Adams has the most receiving touchdowns in the NFL over the past four seasons. (Photo credit: Getty Images)

Davante comes in relatively underpriced and is poised to continue his domination of the Vikings secondary. Minnesota is starting two rookie cornerbacks and ‘Tae went over 100 yards in both games against the Vikings last season. He’s a lock for double digit targets and Rodgers’ clear preference in the red zone.

Not much needs to be said here - Thomas is in a great position to produce this week and is clearly the number one wide receiver on the entire slate. He’s been incredible in home games for the Saints and has consistently torched the Bucs. In his two starts against Tampa Bay last season, Thomas combined for 23 targets, 19 catches, 296 yards, and three touchdowns.

Lockett is one of my favorite wide receiver plays this weekend due to his chemistry with Russ, the game environment and Atlanta's weak slot defense. Russ should be looking Lockett's way early and often. He also had six grabs for 100 yards against Atlanta in week 8 last season. 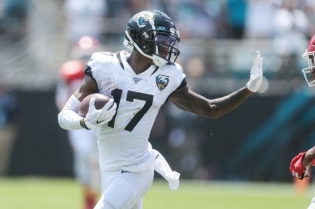 The Jaguars are heavy home underdogs and may be in catch-up mode for most of the game on Sunday. Minshew showed last season that he's not afraid to pile up the targets to his number one receiver Chark. In Week 11 last season against the Colts, Chark turned 15 targets into eight catches, 104 yards and two touchdowns.

Terry McLaurin is likely to be shadowed throughout the day by Darius Slay and Sims Jr. established himself as a legitimate threat in the Washington offense during the final stretch of last season. Sims will be on the field running plenty of routes as Washington’s number two receiver. He’s a young, explosive player and is an interesting GPP play this weekend.

Desean is healthy and the Eagles clear number one wide receiver. Miles Sanders won't be making the trip to Washington, potentially heightening Jackson's role. Nobody in Washington's secondary can match D-Jax's speed. He looks like one of the best value plays on the entire slate and is sure to carry some heavy DFS ownership.

Hurst steps into the valuable starting tight end role in Dirk Koetter's offense. We saw last year how productive Austin Hooper was and Hurst grades out as a more explosive athlete. The game environment is one of the most appealing on the slate and Hurst has a great chance to produce while Seattle has their hands full trying to stop Julio Jones, Todd Gurley, and Calvin Ridley.

Andrews was the Lamar Jackson's primary target throughout the 2019 season and has a chance to up his snap rate and number of routes run with Hayden Hurst now in Atlanta. In his two games against Cleveland last season, Andrews combined for 17 targets, 10 catches, 124 yards and three touchdowns.

Offensive options are limited right now in the Philly offense with Miles Sanders out with a hamstring injury. Goedert runs plenty of routes and is a significant threat in the red zone. While Zach Ertz may carry some decent ownership and rightfully so, Goedert is a promising GPP pivot. 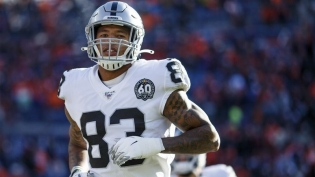 In what could be a somewhat unexpected high-scoring game, Waller could prove to be a valuable GPP play. He's projected to carry low ownership in DFS tournaments as he's arguably overpriced a touch - higher than Zach Ertz and just $100 cheaper than Mark Andrews.

Herndon is super cheap and has shown chemistry with Darnold when on the field. The Jets are completely banged up, leaving Jamison Crowder and Herndon in a position to soak up a large target share. He sticks out as a decent one-off play or run-back option if you're stacking the Bills offense.

Doyle enters Week 1 with a great price, in a good matchup, and with a dependable role in the Colts offense. Philip Rivers has consistently peppered the tight end position over his career and Doyle looks like a great low-priced option this week.