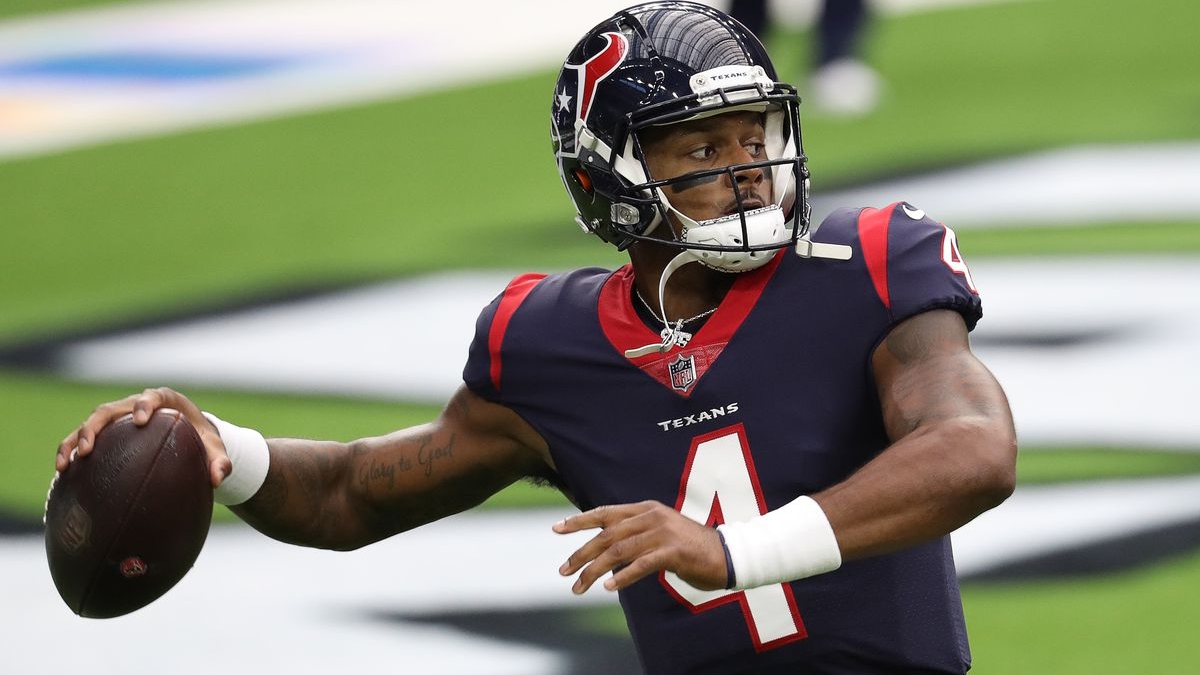 What’s up everybody! We have a really interesting slate on our hands this week and I’m excited to share my favorite picks and game stacks for Week 7.

Let's get to it! We'll start with quarterbacks and work our way through the skill positions.

We can lock Kyler in cash lineups with a great deal of confidence this week. His elite rushing floor paired with a juicy home matchup against the Seahawks defense gives Murray both a high floor and ceiling. We know that Russ will put up points, forcing Murray to put the pedal down for four quarters.

Watson has been on fire lately, throwing for over 300 yards and multiple scores in each of the past three games. He faces a beatable Green Bay defense in a game environment that features a projected game total of 54.5 - one of the highest on the slate. 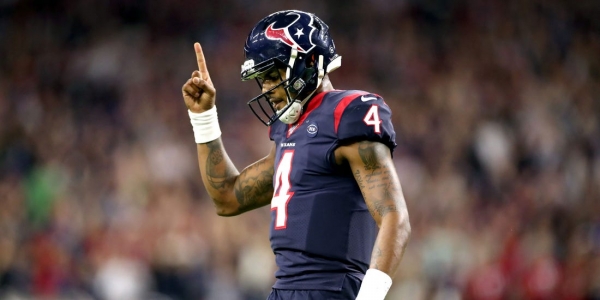 Stafford is in the classic flop-lag scenario that saw him carry heavy ownership last week only to see the Lions punch in three rushing scores and spoil Stafford’s fantasy day. I love pairing Stafford up with Golloday and/or T.J. Hockenson this week in a game that has shoot-out potential.

Herbert has been impressive since taking over for the Chargers and gets a home matchup against a pitiful Jacksonville defense. He takes deep shots, has rushing upside and has clear stacking options in Keenan Allen and/or Hunter Henry.

Burrow simply comes in too cheap and is in a nice spot in a home matchup vs. the Browns. Joe Mixon has been ruled out, leaving the Bengals offense in a position where they will rely heavily on Burrow throughout the game. He leads the NFL in passing drop-backs and has thrown for 300+ yards in 4/6 games to start the year. Burrow is my favorite pay-down option at quarterback this week. 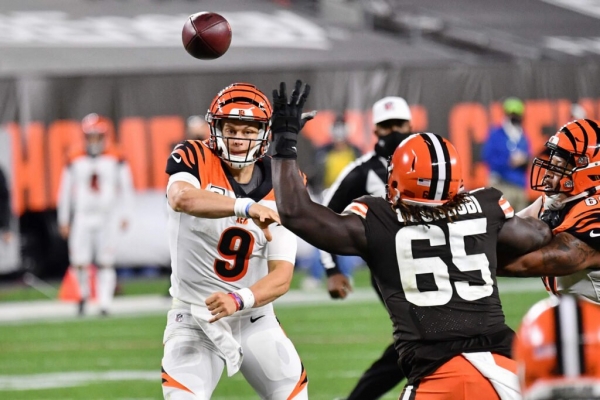 Brees doesn’t provide the rushing upside we typically bank on in DFS, but he gets a great home matchup and comes in really cheap. I’m not looking to Brees in tournaments, but he’s always a threat for multiple passing scores at home.

Kamara has been above and beyond the number one scoring running back in PPR formats and finds himself in an absolute smash-spot this week. He checks some important boxes - his team is a heavy home favorite vs. an abysmal run defense, he's receiving the majority of goal-line opportunities, and he's heavily involved in the passing game. Plus, target-hog Michael Thomas will miss another week - boosting Kamara's touches and floor even higher.

Hunt is a near-lock for 20 touches against a bad Cincinnati defense. In Week 2, Hunt turned 12 touches against this same defense into 101 scrimmage yards and a score. The Cleveland offense is banged up - likely forcing them to lean heavily on Hunt this week. He especially stands out on FanDuel, where he’s the 11th highest priced running back, compared to being the 6th highest on DraftKings. 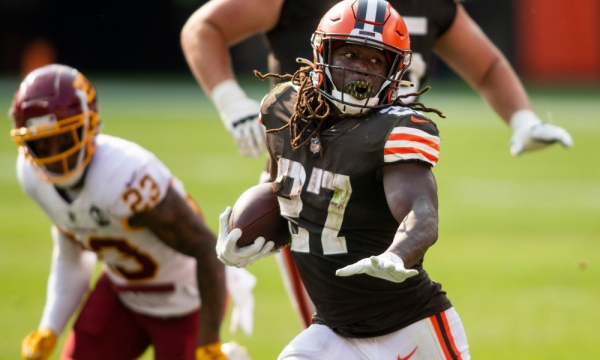 In a game where DFS players will heavily stack the passing games of Seattle and Arizona, Carson looks like an excellent pivot and could help you climb the leaderboards as a late hammer with multiple touchdown upside.

Heavy snow-fall is expected in Denver this weekend and that could lead to another heavy dose of CEH on the ground  for the Chiefs offense. His DFS pricing hasn’t changed significantly following his 26-carry, 161-yard performance against the Bills last week. His ownership may be slightly suppressed due to the Le’veon Bell signing, but it’s likely that Bell essentially takes over Darrell Williams job early on, leaving CEH’s RB1 role mostly intact. 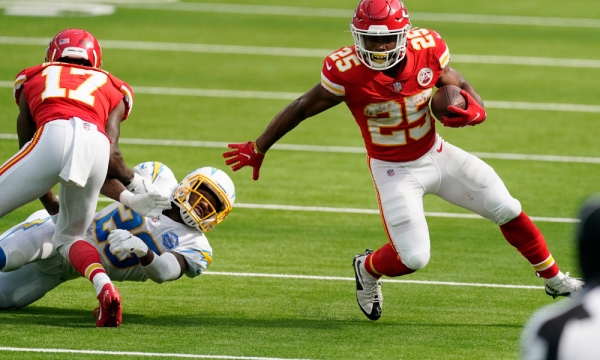 With Joe Mixon declared out, Gio likely steps into 15+ touches in a home matchup against a mediocre Cleveland defense. He’s proven to be dependable in the passing game and he makes for a rock-solid value play in DFS this week. He’ll likely be the highest owned player on the entire slate, so at least keep that in mind.

Singletary has truly established himself as the lead dog in the Buffalo backfield and the Bills enter this game as a 12.5 point favorite against a Jets team that is looking like the worst in the entire NFL. Josh Allen can always tilt our faces off with multiple goal-line touchdowns, but Singletary is certainly in a great spot here. He should carry little ownership but has the upside to make a difference in tournament lineups.

McLaurin has continued to impress with his elite route-running and playmaking ability in his sophomore season. He’s the clear number one receiving option in the Washington offense and has piled up 58 targets through 6 games. McLaurin should roast the Cowboys secondary and looks like one of the best wide receiver values on the entire slate.

Moore makes sense as a high-floor option with upside this week. He averages eight targets per game, but his targets are much more valuable than the typical wide receiver. He boasts the sixth highest air-yard team market share in the league. When Teddy is looking for D.J., he’s often looking for him deep and it’s only a matter of time before it starts paying off in a big way. 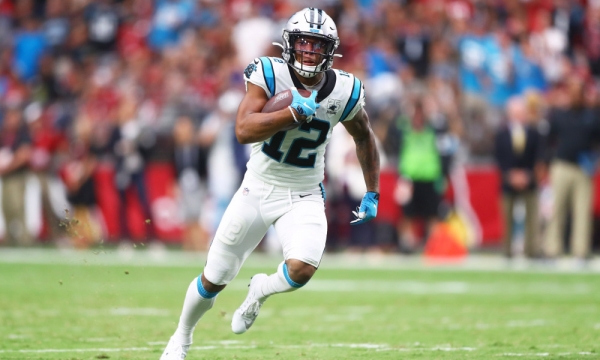 Allen is one of my favorite plays on the entire slate this week and I love pairing him up with Justin Herbert. His ownership in DFS may be suppressed due to the back injury that forced him out of last week’s game, but he’s been on absolute fire since Herbert took over at quarterback. In the last three full games with Herbert at the helm, he’s averaged over 13 targets, nine catches and 96 yards per game.

Tee Higgins has established himself as the number two receiving option in the Bengals offense behind Tyler Boyd. In his past four games, Higgins has averaged eight targets, five catches and 76 receiving yards per game. He's the deep threat in this offense and looks like a great, affordable stacking option with Joe Burrow this week.

Perriman is dirt cheap and coming off a four-catch, 62-yard game on eight targets. It was his first game back since getting injured in Week 2, but he was immediately locked into the Jets' starting lineup. Not only is he super cheap, he has legit upside as a big-bodied burner that could see plenty of routes against Josh Norman. Jamison Crowder has been downgraded to "doubtful" for this weekend, leaving Perriman as the potential number one wide receiver in this offense. He’s the only wide receiver under $4,000 that I’m considering this week.

Cooks has finally found his groove with Deshaun Watson but his price hasn’t caught up yet. In the past two games, Cooks has piled up 21 targets, 17 catches, 229 receiving yards and two scores. If Jaire Alexander is strapped on Will Fuller, Cooks may be in some advantageous situations throughout the game. 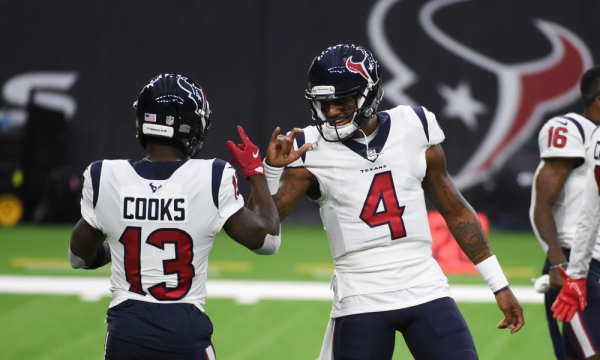 Brandin Cooks has scored in back to back games for the Houston Texans. (Photo credit: AP Photo / Eric Christian Smith)

Henry has proven to be one of the more consistent tight ends in the league in terms of production and he finds himself in a great matchup against Jacksonville this week. He’s averaged over six targets per game since Justin Herbert took over as the starting quarterback and he also found the endzone last week. He’s too productive and consistent to fade at his price point. I’m locking in Henry into plenty of lineups this weekend.

Hockenson hasn't had his break-though game of the 2020 season quite yet but he's in a premium matchup against the Falcons secondary that has been torched by tight ends this season. This game projects as a high-scoring affair and Hockenson makes for a great stacking option with Matthew Stafford in tournament lineups. 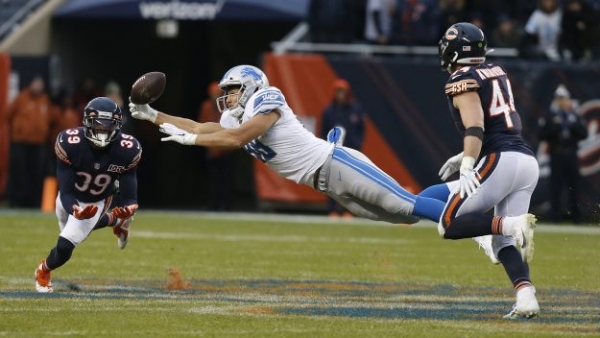 Kelce is the best pay-up option at the position on this slate and it’s no surprise why. With a snow-game expected in Denver this weekend, Patrick Mahomes may rely heavily on his star tight end to get open in the short to intermediate areas. He’s always a threat for a multi-score game.

Darren Fells looks to continue his recent run of success as the starting tight end for the Texans after putting up eight catches, 142 receiving yards and two touchdowns combined over his past two games. Jordan Akins hasn't practiced all week and this game environment projects for a ton of points. If I'm rolling Deshaun out in a tournament, Fells makes sense as a cheap, positive correlation play.

Njoku is likely to see a significant uptick in snaps and routes with Austin Hooper expected to miss the next couple of weeks following an appendix surgery. The Browns receiving core is banged up - Hooper is out, Jarvis Landry has a broken rib and Odell Beckham Jr. said publicly that he’s working through a turf toe injury. Njoku is an interesting, cheap tight end option this week.

The Saints will be without Michael Thomas and Emmanuel Sanders in the receiving game and there’s a chance that Drew Brees relies a bit more on his veteran tight end than he typically would. Cook has scored a touchdown in two out of the past three games and has enough upside in the Saints offense to pay off his current price tag.

Best of luck this weekend everybody! Thanks for reading - I really appreciate it!