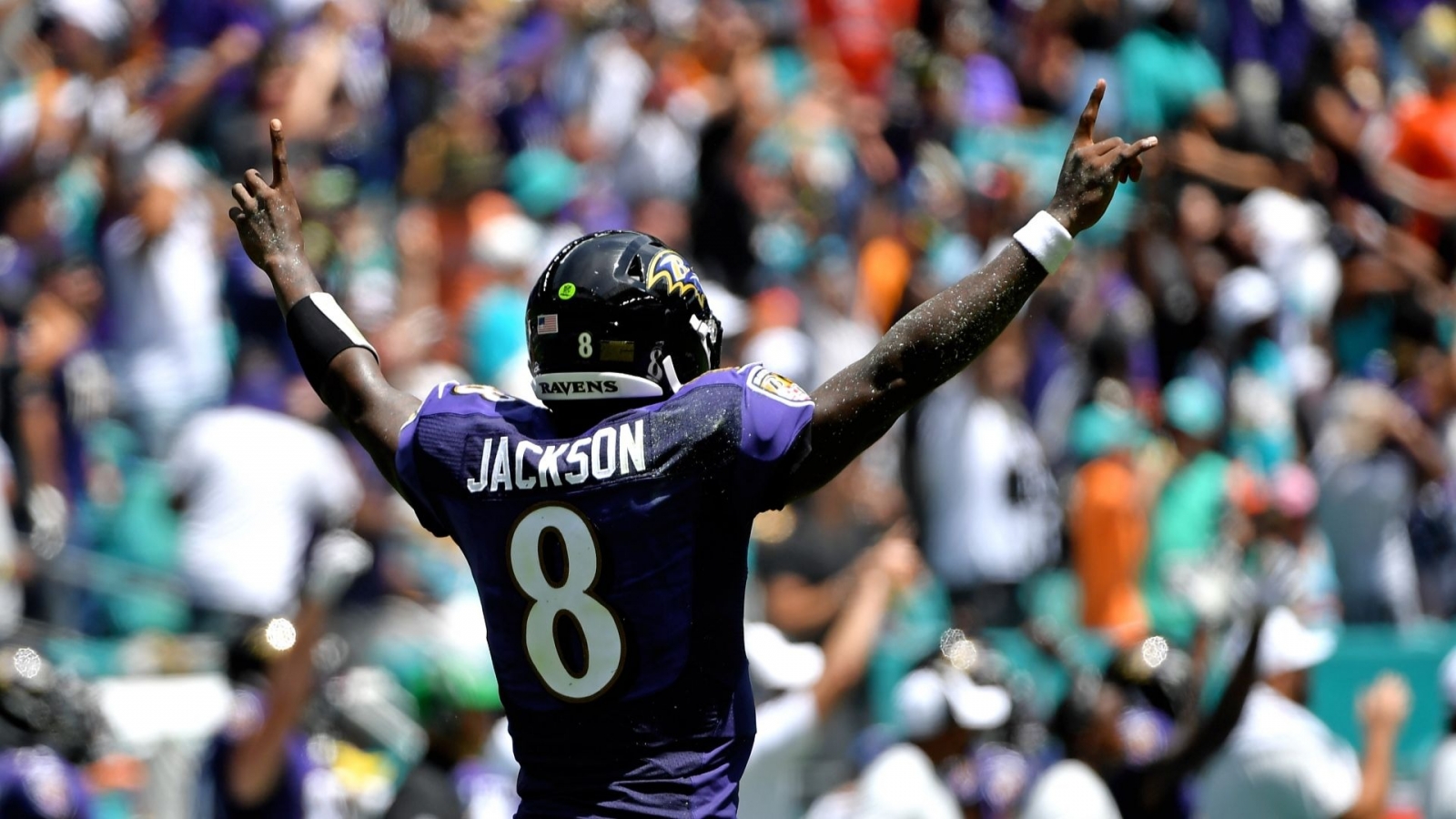 Hey everybody! We're on to Week 9 and I'm really excited to share my favorite player picks and GPP game stacks. This is shaping up to be an awesome slate with a bunch of exciting matchups and plenty of worthy fantasy options that we'll need to comb our way through.

Let's get to some picks! We'll start with quarterbacks and work our way through the skill positions.

The MVP front-runner Russell Wilson has thrown a ridiculous 26 touchdowns through 7 games this season and is in a great spot against the Buffalo Bills this week. Stack him up with D.K. Metcalf and/or Tyler Lockett and watch the points pile up.

Deshaun has been ripping it up since the Texans fired Bill O’Brien - throwing for over 300 yards and multiple scores in four consecutive games. The Jags’ have one of the worst defenses in the league and Watson’s rushing ability gives him an elite floor in terms of fantasy production. Look for Watson to have a big week in Jacksonville.

Allen has come back down to Earth the last few games after a few blow-up games earlier in the season, but could be in a bounce-back spot this week. He’s reasonably priced and is in arguably the best matchup that he’ll face the entire season with the atrocious Seattle defense traveling across the country to Buffalo. I love stacking Allen up with Stefon Diggs and/or John Brown this week. 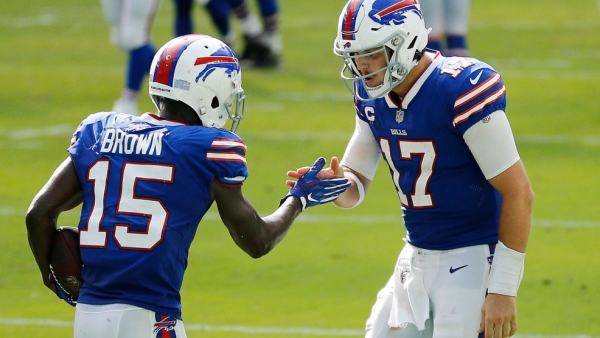 Lamar has been quiet lately but we get a chance to play him indoors, on turf, and under $7,000 on DraftKings this week. He stands out to me as a great value and he’s only one week removed from a 100-yard rushing performance against the Eagles. Pair him up with Marquise Brown or Mark Andrews this week for an affordable, high-upside stack.

Drew Lock has been taking a bunch of deep shots lately and comes in absolutely dirt-cheap on DraftKings this week. He’s in a great matchup against Atlanta in a game environment with a total projected game total over 50 points. He’s intriguing as a cheap, upside tournament play that you can stack with Jerry Jeudy and/or Noah Fant.

Hold your nose - Allen is super cheap and in a home matchup against a pitiful Giants’ defense. Just two weeks ago, Allen threw for 280 yards and two scores against this same defense on the road. He has a rushing touchdown this year as well, showing a touch of rushing upside that some other quarterbacks simply don’t have. If I’m playing Allen in a galaxy-brain tournament lineup, I’m certainly pairing him up with Terry McLaurin.

We don’t have to overthink this one - Cook is coming off a superhuman, 31-carry,  four-touchdown performance against the Packers and now gets another cushy matchup against the Detroit Lions. Cook checks a few important boxes as a home favorite, high-volume running back that is involved in the passing game and getting the team's goal-line carries. He’s looking like one of the best plays on the entire slate.

Edmonds was already seeing around five targets per game in the passing game in the Arizona offense before Kenyan Drake went down with a torn ligament in his ankle. Now, he’s likely to add about 15 carries to that role against a bad Miami defense. Miami could be due for a big letdown following an emotional win in Tua’s first start and traveling across the country to play the rested Cardinals coming off a bye. Fire up Edmonds in DFS this week. 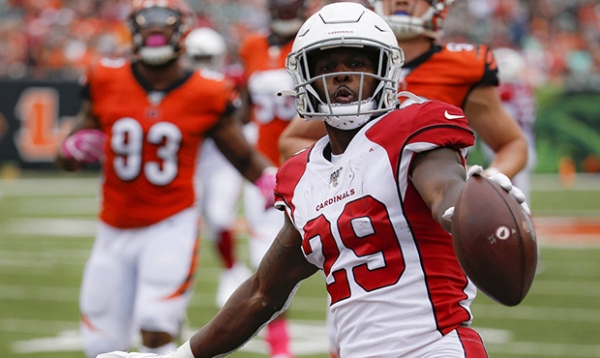 Gibson should come in under 5% owned in most tournaments and is coming off a 20-carry, 128-yard performance against the Cowboys last week. With Washington coming off their bye, there’s a chance they increase the rookie’s role moving forward. He gets a nice home matchup against a bottom-tier Giants’ D and looks like a strong, cheap tournament play - especially on FanDuel.

Henry is going under the radar this week due to a tough matchup at home against Chicago, but we know he always has 100+ yards and multiple touchdown potential. This is a great spot to play Henry at low-ownership in tournaments and while the Bears' defense is certainly tough, they aren't the juggernaut they've been over the past few years. We don't get many opportunities to play Henry at low-ownership, so it may be crucial to have at least a share or two of him in GPP's this week.

Jackson looks like one of the strongest values at the running back position on the slate. He’s facing the Raiders in a home matchup and has gotten 20 touches in two out of the past three games. Joshua Kelley seems to have been phased out of the offense, and Troymaine Pope has been ruled out with a concussion. Jackson is very likely to find his way into my cash lineup this week.

Dobbins impressed last week, going over 100 yards rushing against the Steelers on just 15 carries. Mark Ingram is doubtful to play, likely putting Dobbins in a position to receive 15 touches or even more once again. He makes a lot of sense this week as a cheap runner in a great offense. 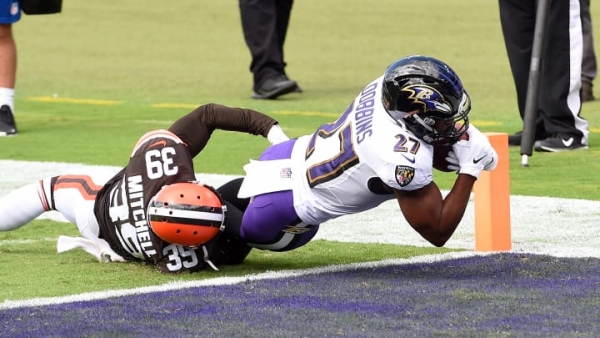 J.K. Dobbins reaches for a touchdown against the Cleveland Browns in Week 1 of the 2020 NFL season. (Photo credit: Getty Images / Will Newton)

Lockett has a great matchup against a Bills’ secondary that’s struggled to contain slot receivers throughout the season. D.K. Metcalf may see a lot of attention from Tre’Davious White throughout the game, giving Lockett more opportunities to gash the opponent from the slot. It’s hard to see Lockett failing in this spot.

I don't think I've played him in DFS yet this year, but Shepherd’s recent volume and his current price tag make him a strong value this week. Since coming back from injury, he’s piled up 14 catches on 18 targets in the past two weeks. Golden Tate has recently been demoted to the practice squad, further solidifying Shepard’s role in the slot moving forward.

Diggs is having a career year as a Bill and is in a prime matchup against a Seahawks secondary that’s giving up over 380 passing yards per game. He’s averaging nearly ten targets a game and looks like one of the best options at the position on the entire slate. 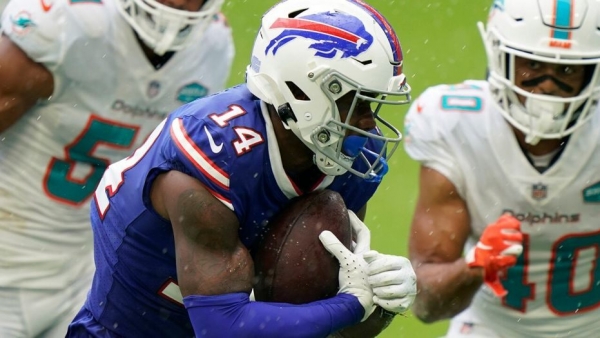 Stefon Diggs makes a catch and run against the Miami Dolphins in Week 2 of the 2020 NFL seaso. (Photo credit: Ryan Gaydos)

Julio is fully healthy and may be primed for a blow-up game with Calvin Ridley expected to miss this game due to a sprained foot. Jones had three end-zone targets last week and has had at least seven receptions in three consecutive games. Julio is my favorite pay up option at the wide receiver position this week, and when he goes nuclear - you better hope you played him.

I’m going back to the well with the Bill’s receiving core with Smoky Brown this week. He’s very cheap on both sites and is in a great game environment. He’s logged a couple of full practices this week - a good sign that he's fully recovered from a knee injury suffered earlier in the season. Brown is one of my favorite value wide receiver plays on the slate this week.

Jeudy led the NFL in air yards last week and turned ten targets into four catches and 73 yards. He gets a great matchup this week in an indoor game against the Falcons and could see additional targets if Tim Patrick misses another game due to a hamstring injury. Jeudy is getting a decent amount of targets deep down the field, making him an interesting, cheap tournament play.

Waller leads his team in targets and target share, and has proven himself to be one of the most dependable tight end options in the league week in and week out. Even with 40+ mile per hour winds in Cleveland last week, Waller still pulled in five catches. His consistent production and red-zone role make him an elite option this week.

Andrews comes in a full $1,000 cheaper on DraftKings than he’s been all season. It’s a tough matchup against Indy, but Andrews has one of the strongest touchdown equities out of any wide receiver or tight end on the entire slate. He’s simply too cheap this week and has a good chance to crush value at his current price-tag.

Fant appears to be fully healthy from his ankle injury and has contributed ten catches on 16 targets in the past two games. It’s clear the Drew Lock loves to throw Fant the rock, and he’s in a great game environment here. Fant is a really interesting option this week, especially if you’re attacking this game with a game stack in a tournament.

It hasn’t been pretty for Engram for most of this season, but he’s come on strong lately. In the past two games, he’s turned 19 targets into 11 catches and 107 yards. He’s yet to find the endzone this season, so he could definitely be due for some positive regression in that category sooner than later. I’m a big fan of an Antonio Gibson / Evan Engram mini-stack in tournaments this week.

Hurst has put up double-digit points on DraftKings in three straight weeks and may see an uptick in targets with Calvin Ridley unlikely to play. Similar to Fant, he’s an interesting piece if you’re stacking up this game in a tournament.

Akins returns to the lineup this week after missing the past four weeks with a concussion and an ankle injury. In the first four games of the season, Akins showed a promising connection with Deshaun Watson, putting up 14 catches on 15 targets for 168 yards.

Best of luck this weekend everybody! Let's go win some money!