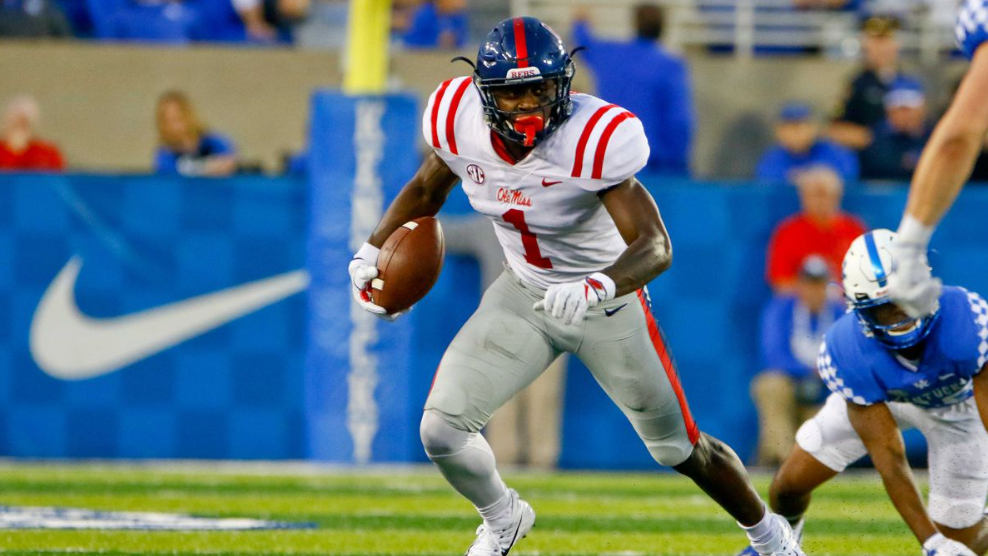 With the NFL draft quickly approaching it is time to break down potential landing spots for skill position players based on current team depth charts.

Tampa Bay Buccaneers - With Ronald Jones struggling so badly in his first year this backfield is wide open.  The Bucs retained Peyton Barber, who is an underrated player, but he isn't a multi-dimensional player.  This is by no means a lock situation for a newcomer, as my mom's old Honda Accord used to say, "The door is ajar."

Houston Texans - Lamar Miller has provided the Texans with some nice mileage as a dependable player, but the opportunity is there to push for touches.  Last season Alfred Blue received 150 attempts and he is gone so those carries are an immediate opportunity.  The ideal candidate will need to be good in pass pro due to the team's offensive line woes.  D'Onta Foreman could provide competition as well, but he only managed seven attempts last season coming off of injury.

Chicago Bears - With Jordan Howard gone to the Eagles there is a nice opportunity available to contribute immediately with the Bears.  Mike Davis is currently slotted into the role but could be challenged by a superior talent quickly.  Tareek Cohen has a role in the passing game locked down making the path to a three-down situation unlikely without an injury.

Backup with Opportunity to Grow

Oakland Raiders - Isaiah Crowell is currently slotted as the team's lead back and Jalen Richard is set to take on passing down and the two-minute offense role.  Crowell is a quality back who has consistently cracked the 6% mark for runs of 15 yards or more despite quarterback issues on each team he has played.  He also fits Jon Gruden's physical lead runner profile.  The team isn't committed to Crowell past 2019 so there is an opportunity for a younger back to push for time as the season progresses, especially if the losses are stacking up.

Minnesota Vikings - Dalvin Cook is an exciting player when on the field but has missed a lot of action at this early stage in his career.  Ameer Abdullah is the only notable name on the depth chart at this point.

Atlanta Falcons - Devonta Freeman is another guy that has been plagued by injuries at times.  Ito Smith performed admirably last season so the path to backup isn't a slam dunk but it could happen.

Dallas Cowboys - Ezekiel Elliott has managed to avoid major injury to this point despite his heavy workload.  He is a warrior but he is human and only Darius Jackson currently sits behind him on the depth chart.

Pittsburgh Steelers - James Conner battled some issues last season and this is an offense that runs the ball well.  Jaylen Samuels is a nice player but I have my doubts about him as a three-down back for an extended period of time.

Washington Redskins - The Redskins passing attack doesn't have a gravitational force that pulls targets to them currently.  If the Redskins select a wide receiver high, I expect them to push for big targets immediately.  The quarterback situation isn't the best, but Keenum is capable.

Miami Dolphins - Another team that doesn't currently have a dominant receiver that demands targets.  Fitzpatrick isn't the long-term solution but he can bridge the way for a year or two if needed should the team take a receiver early.

Pittsburgh Steelers - With Antonio Brown gone, the secondary target role to JuJu Smith-Schuster is wide open.  The team drafted James Washington last season but he struggled to acclimate to the playbook.  Donte Moncrief signed this off-season, but he has been a disappointment to this juncture.

Green Bay Packers - This team has some youthful upside currently residing on the roster, but those players aren't from this coaching regime.  With Randall Cobb gone and Jimmy Graham moving slow the number two target in this offense is currently up for grabs.

New England Patriots - I nearly grouped New England in the tier above, but the signing of Demaryius Thomas was just enough to keep me from doing so.  I wouldn't argue though if that is where you think they belong - Thomas and Graham may be more comparable than I want to believe.  Edelman is the clear top target, but the rest of the depth chart after Thomas is barren.  Any newcomer will have a chance to push for immediate targets with an opportunity to grow as the season unfolds.

Indianapolis Colts - Devin Funchess was brought in on a one year deal, but could be pushed by a youngster if he falters during the season.  Worst case this is a great dynasty landing spot with Andrew Luck at quarterback.

Denver Broncos - Emmanuel Sanders is aging and Courtland Sutton struggled last season.  DaeSean Hamilton performed well, but the team likes him out of the slot.  This is probably more of a dynasty scenario but an opportunity to play outside in this offense may come sooner than we think.

Arizona Cardinals - Christian Kirk showed flashes his rookie season and Larry Fitzgerald likely remains the top target this season, but dynasty owners should monitor this situation closely.  Kliff Kingsbury brings a pass-heavy approach to this offense and if the quarterback situation gets sorted out there will be plenty of targets available.

Kansas City Chiefs - This is more of a situation to monitor, but if the Chiefs use any premium draft capital at wide receiver it could mean they are concerned about Tyreek Hill's current legal situation.  There were rumors before the legal concerns that the Chiefs were willing to trade Hill.

New England Patriots - The Patriots have some big shoes to fill with the loss of Rob Gronkowski.  This is a juicy landing spot for one of the top tight ends.

Oakland Raiders - With Jared Cook departing the door is open for a young tight end to push for a lot of time.  With Antonio Brown and Tyrell Williams in town, the upside will be limited.

Jacksonville Jaguars - Geoff Swaim and Ben Koyack are the current leaders in the club house.  Another premier landing spot.

Arizona Cardinals - Ricky Seals-Jones and Charles Clay are currently atop the tight end depth chart.  Seals-Jones didn't impress much in his opportunity last season.  Clay is a capable veteran but has been hampered recently by injuries.  There is an opportunity to challenge.

Buffalo Bills - Tyler Kroft and Jason Croom are the top two options on the depth chart.  This isn't an optimal offense for pass catchers, but there is an opportunity to push for a starter role.