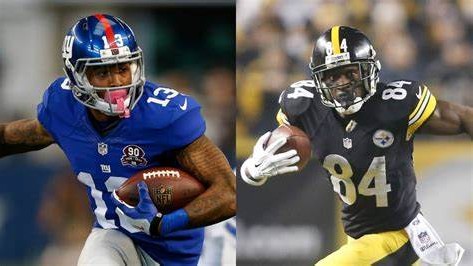 There are still some wide receiver and tight end free agents that can have some lasting relevancy throughout the coming weeks and into the 2019 NFL season for fantasy football, but the main players in this free agency and trading period have for the most part set their new destinations and new roles going forward. Those players will be profiled here and I will give you my takeaway on their fantasy futures. Please feel free to check out the other two articles in the series, where I profiled both the FA/Trade Quarterbacks and FA/Trade Running Backs! Also, don't forget to follow me on Twitter @ktompkinsii! Without further adieu...

As if Twitter dot com couldn't break any further after Antonio Brown's odyssey from Buffalo to not Buffalo to eventually Oakland, then came the news that the Cleveland Browns traded a 1st and 3rd round pick plus S Jabrill Peppers to the New York Giants for Odell Beckham. This trade shakes the entire landscape of two franchises and the entire AFC North. There is a very realistic shot that the Browns could be a darkhorse favorite for the AFC North based on the strength of this trade and their other offseason moves. Beckham provides that 1A, alpha receiver that matches up well with last year's #1 overall pick, QB Baker Mayfield. The only thing holding Beckham back is injuries; he's played one full season in his 5 seasons as a pro, in 2016. There's no questioning his talent and the talent around him at all. For fantasy purposes, he's an slam dunk WR1 and should be a solid 2nd rounder in all fantasy formats, and should be boosted a bit in dynasty formats. 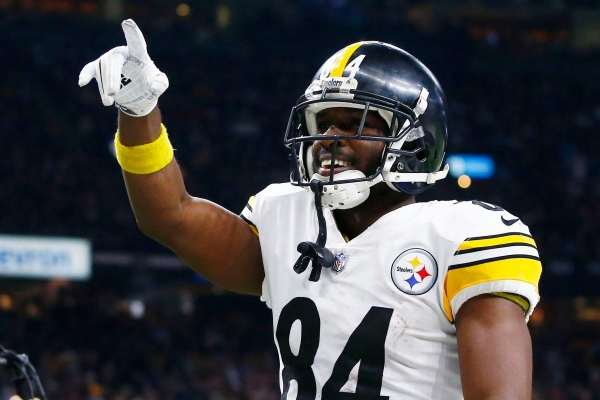 The Raiders made a trade and took a plunge into the free agent market to grab a couple of shiny new toys for Derek Carr. The first being Antonio Brown, clearly one of the best receivers in the NFL, moving to Oakland from Pittsburgh. Brown, with six straight 100 catch seasons under his belt, could have a bit of an issue with getting to #7. The targets should be there as the clear top option in Oakland, but the quality of that target from a pass-heavy offense in Pittsburgh and Ben Roethlisberger, to an offense in flux with Derek Carr where he only threw 19 touchdowns in a full 16-game slate in '18. The parts around Carr are improving, so expect an uptick in his production, but to automatically expect another double-digit touchdown season and 100+ receptions for Brown is another story. With Brown entering his age-31 season, Brown could hit a wall sooner rather than later in his production. As it stands, he's ranked right about the #10 WR in PPR. 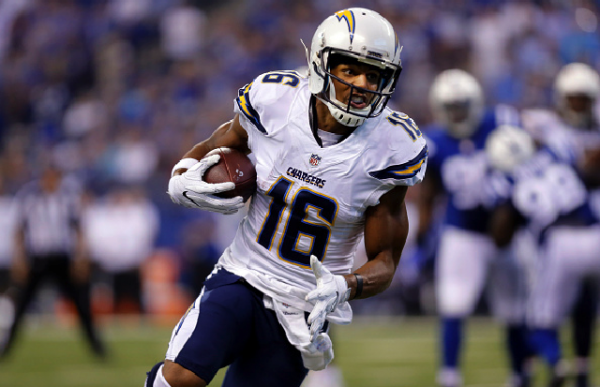 As for Tyrell Williams, he's been utilized as a deep threat throughout his time as a Charger, averaging no lower than 15.3 YPR in each of his 3 full seasons in the NFL. In Oakland, he'll likely be the same, a field stretcher for Derek Carr. While this is an upgrade for the Raiders offense as a whole, for Williams, it's neither an overwhelming positive or negative for his fantasy value. He remains a bottom-end WR3/flex option, worthy of a bench spot in 12-team formats. He'd get a bit of an uptick in best-ball formats and standard leagues. 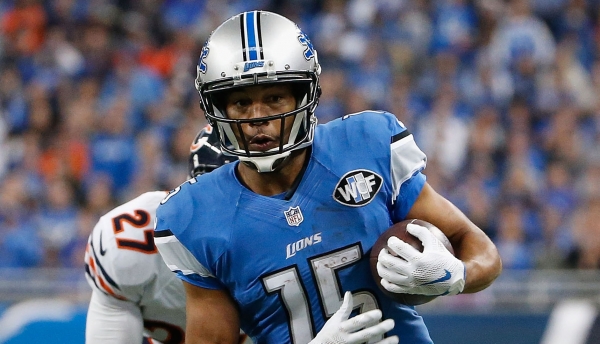 The New York Giants (Dave Gettleman, really) jettisoned Odell Beckham Jr. for Jabrill Peppers and draft picks, but did sign a replacement wide receiver, Golden Tate. For a team that should be tearing everything down and starting anew, it’s a curious move. This leaves the two best wide receivers for the Giants as primary slot receivers, Tate running routes 76% over the last two seasons and Sterling Shepard having a career 75% slot usage rate. With the offensive line being bolstered and Beckham’s departure, one would think that the Giants may get back to a run-heavy offense with their all-universe running back Saquon Barkley. I mean, would you continue to put games on the arm of 38 year old Eli Manning? Tate is a marginal top 40 option at WR for PPR formats until we see how the volume will shake out between Tate, Shepard, Evan Engram, and the likely passing target leader for the Giants, Barkley. 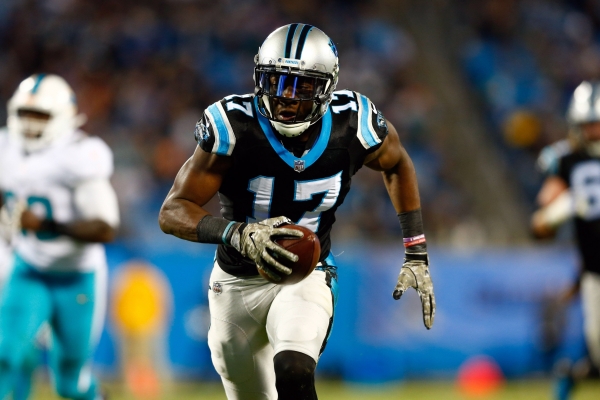 Devin Funchess may have been overpaid for his one season ($13m) but will immediately slot in as Indianapolis' WR2. Whether than translates into fantasy success is a whole different story. Funchess is a big, sizeable target at 6'4", but on a team that had a bunch of sizable targets that Luck already looks to in the red zone (namely, his tight ends), Funchess won't benefit from his size as he did in spurts in Carolina. Add in his propensity for drops (1 drop every 8 catchable targets per PFF) and you've got a receiver that may be worth a flier in fantasy but nothing more. Among the TD or bust options that litter the flex landscape, he sits squarely among them, in WR4 territory in both standard and PPR formats. 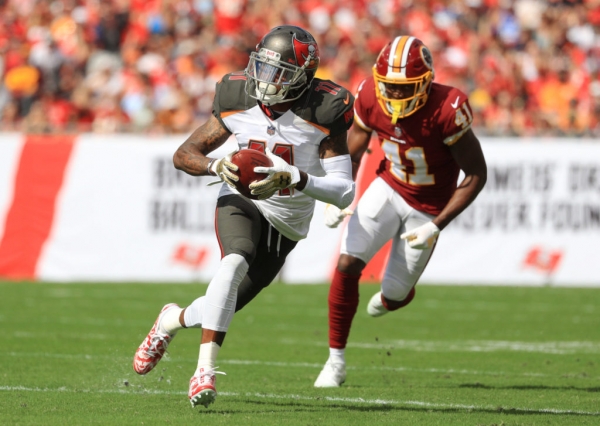 Back to where it all started in the NFL, DeSean Jackson comes back to Philadelphia to fill the role for the Eagles that Torrey Smith and Mike Wallace could not: as a deep threat and boom or bust option for Carson Wentz. Jackson is a great option for that role, when he's on the field. His last full season was in 2013, his last season in Philadelphia. He's 32 years old and has been doing this for a decade in the NFL, so one has to wonder if all these injuries start to take their toll to sap the one thing Jackson has over most receivers, his deep speed. In his 2nd go-around with the Eagles, he's easily the 3rd option in the offense behind Zach Ertz and Alshon Jeffrey, but he's a solid WR3 option and a much better option in best-ball formats. Just know you'll likely have him miss a few games here and there with various ailments. 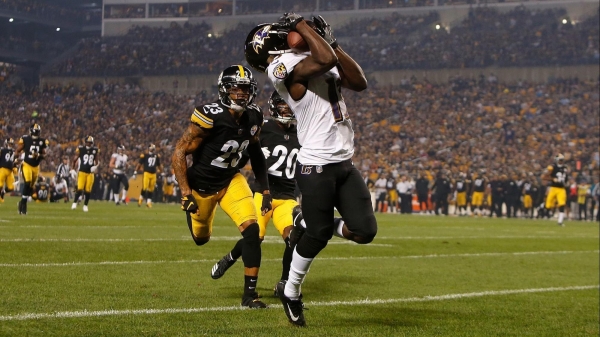 John Brown and Cole Beasley were added to the cadre of Bills' pass-catching options early in the free agency period, to surround QB Josh Allen with better options than he had. Brown gives the Bills a well-rounded speed threat that should mesh well with Josh Allen's cannon for an arm. Brown should be an excellent best-ball option in an inconsistent offense that could be one of the most boom or bust offenses in the entire league. Brown will likely never be a fantasy WR1 or WR2 but he likely replaces Robert Foster as the best fantasy options among Bills' pass-catchers. He's a solid low-end WR3/flex option and a potential best-ball stud. 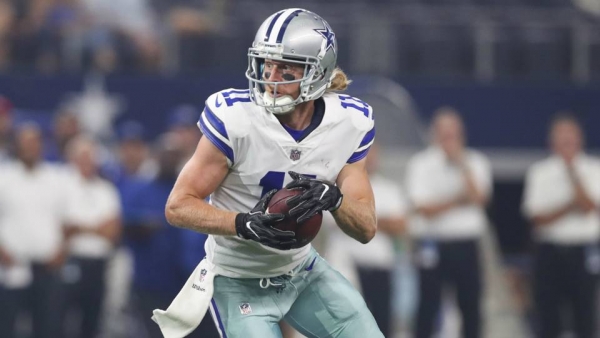 Beasley on the other hand, should be a quality slot option for the Bills, who should be relied on over the middle. Like his previous spot in Dallas, Buffalo will likely be a lesser volume passing attack but will see a consistent share of between 70-80 targets provided he stays healthy. He'd have the most value among the Bills' receivers in PPR formats, but without a true #1 option, all of the Bills' receivers suffer. 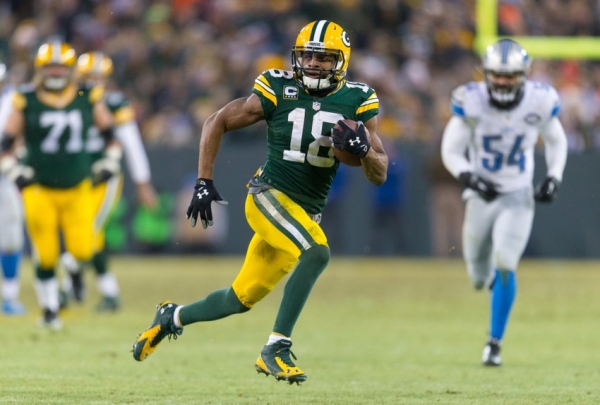 The Dallas Cowboys upgraded the slot position both from a football and financial standpoint, bringing in long-time Packer Randall Cobb on a one-year deal. The main sticking point here is that Cobb will enter the slot for the Cowboys, but that’s if he can stay healthy. Cobb hasn’t played a full 16 game slate since 2015, so it would be very bold to expect that this season. When on the field, Cobb still shows the shifty, elusive, playmaking ability he displayed over an 8 season span in Green Bay. For fantasy purposes, he’s a speculative draft and stash in the late rounds, due to his presence in a low-volume passing game as a 3rd or potentially 4th option. 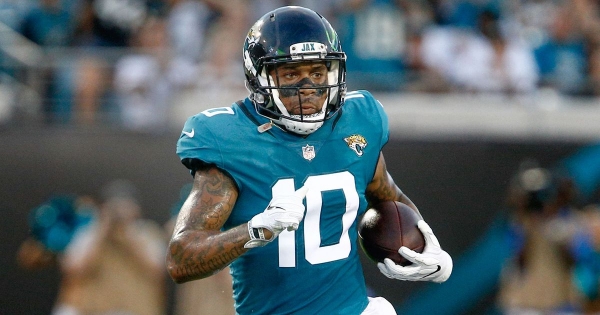 Throughout the offseason, the lingering and inevitable Antonio Brown trade brought optimism to one particular Pittsburgh pass-catcher, the 2nd year WR James Washington, as the next great Steeler receiver. That optimism was brought to an abrupt halt with the free agent acquisition of Donte Moncrief, the underachieving former Colt and Jaguar. He's been a sleeper for many years, with many a fantasy owner trying to pinpoint his breakout, but to no avail in his 4 injury-ravaged seasons in the NFL. Still only 25 years of age, Moncrief could reap the benefits left to him by partially filling the void that Brown left, namely a share of the 168 targets Brown had in 2018. Clearly, he won't be receiving all, but half of those targets (84) is certainly a projectable number for him as long as he is healthy with potential for a bit more in that pass-heavy Steelers offense. Moncrief is lumped into the low-end WR3/flex territory in all formats with potential to move up given the offense that he is in. 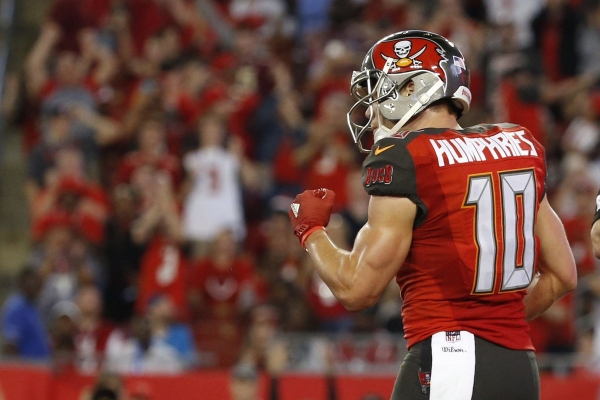 With all the potential destinations for Adam Humphries, he landed in one of the worst for his fantasy value: slot receiver for the Tennessee Titans. Humphries signed a 4-year deal with the Titans and slides into the slot position that Tajae Sharpe manned last season with very little success. A positional upgrade, sure, but the Titans offense has run the ball more and more in QB Marcus Mariota's four seasons in Nashville. Simply put, a run-heavy offense, a downward-trending quarterback, a new offense manned by new offensive coordinator Arthur Smith, and worse yet: the FIFTH OC that Mariota has had in each of his 5 seasons. I like Humphries' skillset as a player, but as a fantasy asset, he can be drafted as an end of draft dart throw or left on the waiver wire unless the Titans make a concerted effort to get him the ball. 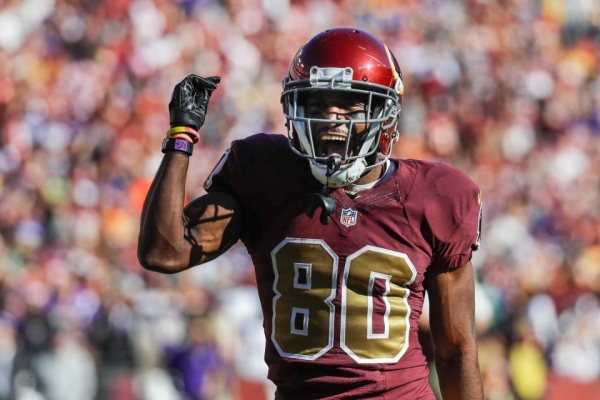 As a receiver that for his career has spent 3/4 of his routes run in the slot, Jamison Crowder could be an underrated get among the pass catchers that changed teams this offseason, and it's tied to Crowder's health and the maturation of Sam Darnold from year 1 to year 2. Crowder had a bit of a lost season last season with injuries, but in a low-volume passing attack, had 66 and 67 catches respectively in '16 and '17, and averaged over 100 targets both seasons. Crowder could be a dark-horse to be a go-to slot option for Darnold if healthy. Right now, he's among the flex options at the position in fantasy, with an uptick for PPR, but with new blood and talent surrounding Darnold, Crowder could be a big time beneficiary. He's a draft and stash but keep an eye on him. 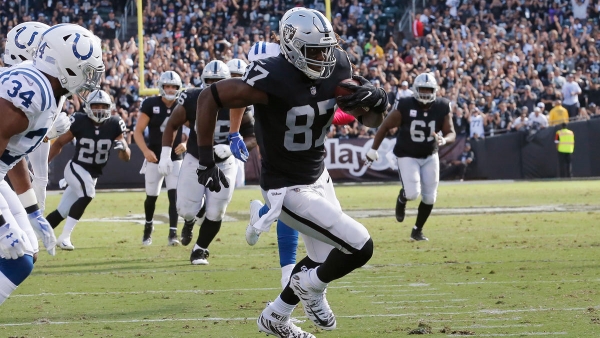 Jared Cook put up quality numbers last season for the Raiders as the lone bright spot in their moribund offense. Cook racked up a 68-896-6 line and ended 2018 at TE5 overall. Now will Cook see the 101 targets and 19% target share he had last season? Highly doubtful on a run-oriented offense and where the top two targets from last season still remain (Michael Thomas and Alvin Kamara). Will Cook receive more targets in 2019 than last season’s Saints leader (Ben Watson, 49)? I think that’s a fair bet to take. I’m predicting Cook to grab roughly 75-85 targets, a handful of touchdown, and tempered expectations this season for Cook in ‘Nawlins. A back-half TE1 finish in PPR leagues should be a solid, consistent start for fantasy owners. 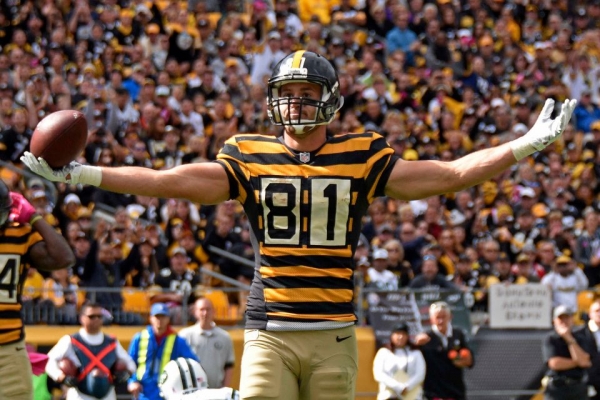 "The Road Dogg" Jesse James leaves the friendly confines of Heinz Field to join up with the Detroit Lions on a four-year pact. A noted blocker in both the pass and run games, James provided a career high 432 yards receiving as well as a career high in yards per reception (14.1). He could be a sneaky option in the passing game as he should be far and away the snaps leader among the position for the Lions barring any sort of injury. He's not somebody to draft in any leagues but could be a factor during bye weeks or other injuries around the league at the position.

Stay tunes to Fighting Chance Fantasy as we continue to provide a ton of fantasy football coverage heading into the NFL draft as well as in-season fantasy baseball coverage!