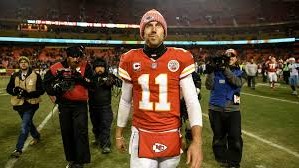 The Eagles shocked the world by winning the NFC East and then carrying that momentum, even without their star quarterback, to the Super Bowl Championship over the Patriots. They didn't do many additions this offseason, but now the division starts to chase them. The other three teams all were very disappointing this year, and all made changes to try to get back into the playoff hunt. Which guys can help your fantasy teams this upcoming year? Look no further than below!

Alex Smith, QB, Washington Redskins. I still can’t believe the ridiculous contract that the Redskins gave Alex Smith. He is decent. He is ok. But he is no great thrill. He gets off to great starts, and then fizzles down the stretch. Every year. Now he goes to Washington who doesn’t exactly have a lot of household names at wide receiver. Smith has one 25 passing touchdown season in his career, and even that isn’t a great fantasy season. Alex Smith is a QB2 at best for 2018. I like the thought of Hurns in Dallas. With Bryant gone, he will be expected to take the next step in his maturation. Think Devin Funchess in Carolina

Allen Hurns, WR, Dallas Cowboys. Hurns went from a crowded receiving corps in Jacksonville, to the Man in Dallas. With Dez Bryant released, and Terrance Williams who just sucks maybe still in trouble, Hurns is now the number one. At 6’3”, Hurns is a solid red zone candidate, which is even more opened up with Jason Witten out of town. Outside of Ezekiel Elliott, there aren’t many other offensive weapons in Dallas and Hurns could be a great bargain in draft season.

Paul Richardson, WR, Washington Redskins. Richardson has plenty of speed on the outside in Washington, however his quarterback, Alex Smith, doesn’t have the arm to get it to him. He will also have to deal with Josh Doctson for similar type balls. I don’t know that I expect the Redskins passing game to be powerful enough for three receivers to be fantasy worthy so that might leave Richardson more of a WR4 or WR5 at best this upcoming year.

Jonathan Stewart, RB, New York Giants. Well, any value that Stewart might have gained when the Giants first signed him went down the toilet when they drafted Saquon Barkley. Barkley is a three down back, a receiving threat, and will be on the field almost any down. Stewart has little to no value without an injury to Barkley.

Cody Latimer, WR, New York Giants. A former second round pick, Latimer was never really given a fair shake in Denver, not with competent quarterback play at least. He has a shot at being the third wideout in New York, although likely the fourth target after Beckham, Shepard, and tight end Evan Engram. If there was to be an injury to either of the top two, which is possible given their history, Latimer might really have a chance to have a fantasy impact. Not likely someone worth drafting, Latimer is someone to definitely keep an eye on this preseason.

Marquess Wilson, WR, Philadelphia Eagles. A bit of a longshot to make the team, Wilson has shown a few flashes when given the opportunity with the Bears. He will be buried fairly down the Eagles receiving depth chart, and unless the Eagles suffer significant injuries at the position, Wilson won’t likely have any fantasy value.