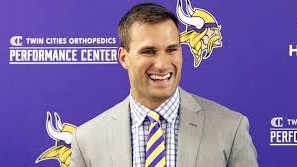 Case Keenum led the Vikings to the division title, but we knew that wasn't going to last and the Vikes made their long term move at the quarterback position. The Bears made several moves to get out of the basement of the division, and the Lions and Packers both continue to try to stay in contention to make this a very interesting division coming into 2018. There were a number of big names now calling the NFC North home, so let's take a look to see who it is.

Kirk Cousins, QB, Minnesota Vikings. Cousins has three straight 4,000 yard, 25+ touchdown seasons in Washington. His completion percentage has been strong, even though his interception numbers have been increasing. He took a fully guaranteed deal to join the Vikings who have a strong offense. With Dalvin Cook keeping the defenses near the box with his running, and Stefon Diggs and Adam Theilen as awesome receiving targets, this could be Cousins best opportunity for his first 30 touchdown season Look for Cousins to be a mid to low range QB1 in 2018.

Allen Robinson, WR, Chicago Bears. Robinson had a monster 2015, a disappointing 2016, and then tore his ACL in Week 1 last year. He got a monster contract from the Bears to be their number one receiver. I believe that Mitch Trubisky will continue to improve, and assuming that Robinson is healthy, he should have a very good year. He is an injury risk coming off the knee injury, but I think he is a possible WR2 for the upcoming year. Will Green Bay target the tight end more now that they have a star? I mean Rodgers and Graham should equal success right?

Jimmy Graham, TE, Green Bay Packers. Graham was a disappointment in Seattle up until last season, and even though he had double digit touchdowns, he still didn’t even muster 60 receptions. He now goes to Green Bay who has a history of not really using their tight end as much as other teams. I can see Graham possibly getting close to the season he had last year in Seattle, but in no way do I see him getting back to his New Orleans numbers. Green Bay is a powerful passing offense, but unless they make some fundamental changes to who they tend to throw the ball to, I see Graham being a mid range TE1 at best.

Taylor Gabriel, WR, Chicago Bears. Gabriel had a very good 2016 with the rest of the Falcons offense, but like the rest of the team, struggled last year. I think that Gabriel is a product of the Kyle Shanahan offensive system, and I don’t know that Gabriel can have the same success as he did in ’16 in a new system. I don’t know that Gabriel is someone that I would look to draft this season, but maybe a wait and see during the preseason.

LeGarrette Blount, RB, Detroit Lions. After a monster 2016 in New England, Blount disappointed mightily in Philadelphia last season. He still is a big, bruising back who can be a monster at the goal line, however he goes to Detroit who looks to have a crowded backfield. Theo Riddick will be the third down and receiving back, and Detroit drafted Keryonn Johnson in the second round who has the chance to be a three down player. Can Blount get enough carries to have a fantasy impact? You’ll have to watch Johnson’s ability to block in the preseason, as that is often a deterrent for a rookie running back playing a great deal. Blount could just end up being a goal line guy, which would severely limit his fantasy value. This is a situation to monitor in the coming months.

Luke Willson, TE, Detroit Lions. Willson might have more opportunity as the number one tight end in Detroit rather than the number two guy in Seattle, but this guy is no great thrill. He is a big red zone type target, but he won’t get enough catches to be anything more than a mid range TE2 for the season.