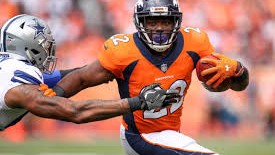 Perhaps the most competitive division in the NFL last season, the NFC South had three ten win teams in 2017. By that token I guess you shouldn't be surprised that no team made huge changes coming into the year, but there were a few notable names that call the South home now. Here are the guys who have new addresses in 2018.

C.J. Anderson, RB, Carolina Panthers. Here’s a guy that really befuddles me. Yes, I used befuddled. How many fantasy football articles do you read with befuddled in them? Anderson broke 1,000 yards for the first time in his career in 2017, but at 4.1 yards per carry it wasn’t like he was great. He has talent, but hasn’t been an explosive back since his rookie season. He goes to Carolina where he will surely play second fiddle to Christian McCaffery, and certainly won’t be involved in many pass catching situations as that is McCaffery’s wheelhouse. Anderson will be a low end flex play, likely taking the Jonathan Stewart role in Carolina’s offense. Cameron Meredith, WR, New Orleans Saints. Meredith is coming off an ACL tear, but looks like he will be ready for training camp. He will be an interesting player coming into this season. Obviously Michael Thomas is the clear number one, but I think that Meredith can end up being the number two, at least in terms of fantasy production. He had 66 catches for nearly 900 yards last season on a terrible offensive team last year, and now he goes to one of the best passing offenses in the league. Playing on that fast surface in New Orleans with Drew Brees throwing him the ball all makes me kind of excited for Meredith. He could be a nice guy to target at the end of fantasy drafts.

Torrey Smith, WR, Carolina Panthers. Once one of the more feared deep threats in the NFL, Smith has certainly gone downhill in recent years. His time in San Francisco was underwhelming, and last year in Philadelphia wasn’t much better. He is definitely the third receiver behind Devin Funchess and first round pick D.J. Moore, and he hasn’t had 40 catches or 700 yards in three seasons. The Panthers aren’t exactly a high powered passing attack anyway, so to expect three receivers in this offense to be fantasy worthy is just a very long shot.