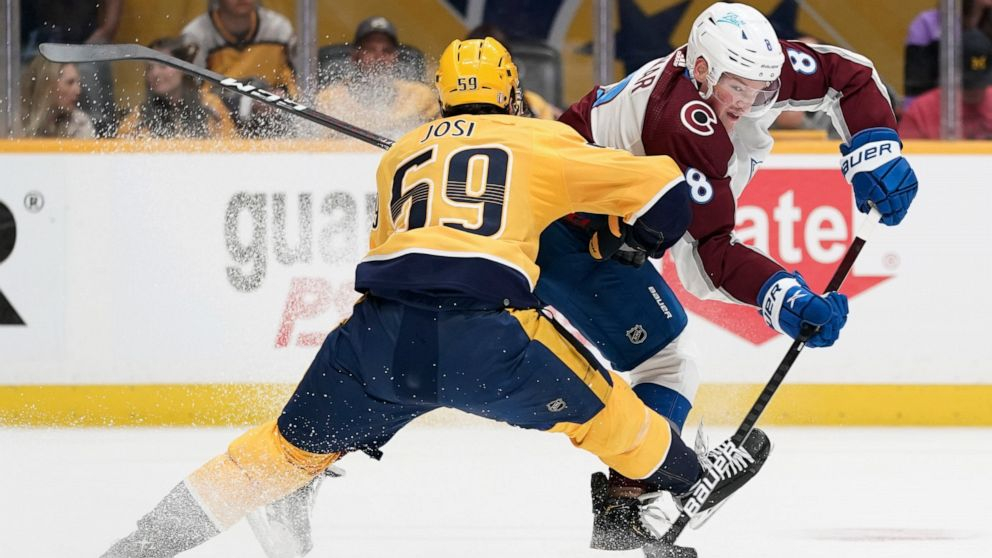 As the NHL has one game in the books on this early 2022-23 season and two more tonight, we'd better cover the rearguards on their respected NHL clubs, and these are some really good ones.  In the past, most NHL defensemen do not really hit their maturity mark until age 27, but this list proves that theory wrong from the very top.  While that is the truth in most cases, we've been blessed the last few seasons with some very special defensemen and this list has the young guns, the ripe and ready for picking, and even the saltier old dogs too, so let's get to it before the Rangers and Lightning face-off tonight.

1) Cale Makar, Colorado Avalanche - Now it's no secret that I absolutely hate Colorado, but that was in the past and this current roster should not be kept in that same circle of hate I harbor for the 90's Blood Feud players.  Makar is simply one of the most talented and mature players for his age that I've ever seen play the position, and that's putting him in elite company.  I never felt this good about Nicklas Lidstrom after three seasons, and the last defenseman I remember getting this jacked about was Chris Pronger at this age.  He won the Norris Trophy last season, the Conn Smythe as playoffs MVP, and the Stanley Cup all at the tender age of 23, so what's the encore? 100-point season? I'm not saying no, but this year Colorado has the target on its back.

2) Victor Hedman, Tampa Bay Lightning - Speaking of Norris, Conn Smythe, and Stanley Cup-winning rearguards, here we have "The Mountain That Skates", no not that one, but the NHL version.  Hedman's evil ways though just shut down the league's best forwards night in and night out, a blistering slapshot, and an almost diabolical method to always be in the right spot is how he wields his trade.  I debated over Roman Josi in this spot and shouldn't shy away from either as the second defenseman, as Josi scores in bunches. It's his play that kept Nashville alive last season, and I would have voted Josi as MVP last year because he was the most valuable player on his team by a long shot.  You can do no wrong with any of these players anchoring your fantasy squads, but I love Victor Hedman more than 99.8% of the league's defensemen and so his Auction value double in my league from getting him at $21 last season, all the way up to $45 this season. Hedman played all 82 games last year and scored 85 points last year and fell just short of a three-peat, but don't expect that to be the end of this Tampa Bay team. 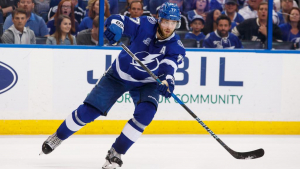 Head and shoulders above the rest of the league, literally and figuratively

3) Roman Josi, Nashville Predators - The Nashville management team has a knack for drafting good defensemen, and Josi is the one right now.  After a 23-goal 96-point season last year, every player on this roster was better and more effective when on the ice with Josi.  His 73 assists last season were higher than any full-season point total to this point of his career, and do not expect him to slow down now that his group of forwards, namely Matt Duchene found his scoring touch again.  Plus, rookie Tanner Jeanot sparked a fire under the once underachieving Predators team, and with the always-solid play of netminder Jussi Saros, Nashville is in a good spot to contend for another playoff spot, led by Josi and another 70-plus-point season.

4) Adam Fox, New York Rangers - No you do not need to have won a Norris Trophy to make the top of this list of stellar defensemen, but let's be honest, it certainly doesn't hurt.  Fox won the Norris two seasons ago at the ripe old age of 22, beating out Cale Makar that season, and yes, we will see these two names in this article most likely for the next ten to twelve years barring major injury.  Fox is the leading minute muncher on my second favorite team, the Rangers, and with the youth movement on defense and in net, the Rangers are in full-blown playoff mode with the deadly mix of veterans and youth and are annually piling up the points and getting into the playoffs. Losing in the Conference Finals last season to Tampa Bay, and I expect the Rangers to be back again this season, looking to redeem themselves against the same Tampa Bay squad.  As for the regular season, you can pencil Fox in for another eye-popping season points-wise, and SOG, plus a good number of blocks but he doesn't hit like a Hedman does but will close in on the 385 shots he took last season. 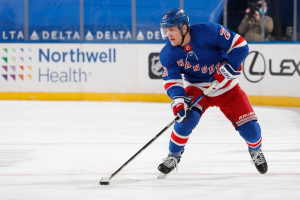 5) Aaron Ekblad, Florida Panthers - This is my bold prediction from this group, and this is all contingent on a few factors.  One, Ekblad actually plays all 82 games, or somewhere close to that like he used to.  In the last three seasons, he has missed 15-25 games.  Secondly, he has to shoot more and assert himself more in the offense and power-plays to really take the next step as an elite rearguard.  As of this posting, Ekblad has not done these things, and with the contract, he has at $7.5 million per season, the owners, management, and fans expect more out of him than the Primadona attitude that seems to come off of him.  Florida has made some huge changes in trading Huberdeau to Calgary for Matthew Tkachuk and moves that teams do when they need to get tougher and more physical for the long season and a deep playoff run.  As a leader of this team, all these things are expected, and I'm calling it now, Aaron Ekblad steps up his game, scoring, and leadership and lives up to this ranking.  If not, the fans will not come, and you might as well move this team to Quebec, where hockey is loved!

6) John Carlson, Washington Capitals - One of the anchors of a veteran-laden Stanley Cup-winning team from a few years back, but Carlson is what Ekblad needs to become to reach all the goals and adoration that Washington fans and management throw on him and to work as hard to be considered a winner.  Carlson punches the time clock every day and misses time, but never had a major injury and has been there when it's time to play.  John will give you a good 200 shots, contribute goals and helpers on the power-play, and is on the first short-hand unit as well as being the go-to defenseman when it's time to go over the boards.  He blocks shots, isn't afraid to throw the body on a nice hit, and is part of the veteran core of the Caps team looking to go deep for one more playoff push, draft him confidently and know you don't have to worry about his roster spot on your team. 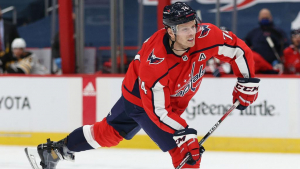 Another crisp Carlson pass to Ovechkin for a blistering one-timer

7) Morgan Rielly, Toronto Maple Leafs - The anchor of the Maple Leaf's defense, led all blueliners in scoring last season with 10 goals and 58 assists, and Rielly gets over 200 shots as well.  Rielly also brings the grit with the hits and blocked shots, and a solid plus/minus, but in my opinion, he needs to step his game up a level to be considered in the Fox, Josi, and above tier of defensemen, which we have not seen yet.  The Maple Leafs need to get Rielly in all the critical offensive situations to really pad the stats and not give his time to Mark Giordano and Jake Muzzin.  One of the problems is they're all passers except for Matthews, and Rielly will lose a lot of secondary assists and primary once the puck gets to Marne, Tavares, and Nylander, so it's not all his fault. His point totals are on par with past seasons where he played 82 games.  This is the year where he grabs the bull by the balls and takes command of this team as a leader who can continually fill your score sheet with steady, but not an eye-popping number, there is an established floor and that is acceptable.

8) Moritz Seider, Detroit Red Wings - After a Calder Trophy-winning season what's Moritz Seider going to do for an encore?  The Red Wings added plenty of veteran contributors via free agency, so things are headed in the right direction in Detroit.  The return of a healthy Jakub Vrana will contribute to Seider adding assists, and he got 187 SOG last season and I expect that to climb over 225 this year.  Seider also brings physicality on the ice and adds Hits (151) and Blocks (161) last season and as his confidence builds so will those numbers, and those numbers are what push him ahead of other established defensemen in the NHL.  Draft Seider as an all-around stat sheet filler and know he has a very solid base to build on and avoids the dreaded sophomore slump. 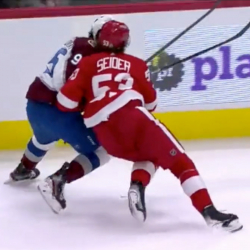 9) Quinn Hughes, Vancouver Canucks - The former Wolverine is earning his stripes out on the left coast in the great city of Vancouver and getting better each of his first three seasons.  With eight goals and 60 helpers last year, a plus +/- plus 10 and expect a jump in numbers for the Canuck this year as J.T. Miller, Elias Pettersson and Bo Horvat will keep the foot on the gas but will be without Brock Boeser for a spell.  This is a young team taking its growing bumps, but they are learning as they go and as Hughes matures, his numbers will continue to grow, and his intangibles are there as well with plenty of SOG, Hits, and Blocks. Hughes needs a jump in goals, and to better that goose egg he had in Power-Play goals last season, and this is solved by upping his SOG total from 150 to the 225 range.

10) Kris Letang, Pittsburgh Penguins - After 16 seasons Letang still brings it every night he is not scratched and is part of the longest Captain Crew in the NHL with Sidney Crosby and Evgeni Malkin.  They may be long in the tooth but surprised almost everyone last year with a solid season and playoff berth.  Letang was good for ten goals and 58 dimes while playing 78 games last year, the second-highest number of his long career.  The stat sheet stuffers are there as well with 214 SOG, and always one to dish out the hits Letang added 171 and 122 Blocked Shots.  You know by now what you're getting when he is drafted, top-line minute muncher, top power-play minutes, and a guy who leaves it on the ice every night he plays.  Draft Letang with this floor, but health and success could catapult him into the higher echelon of defensemen in the twilight of his career.