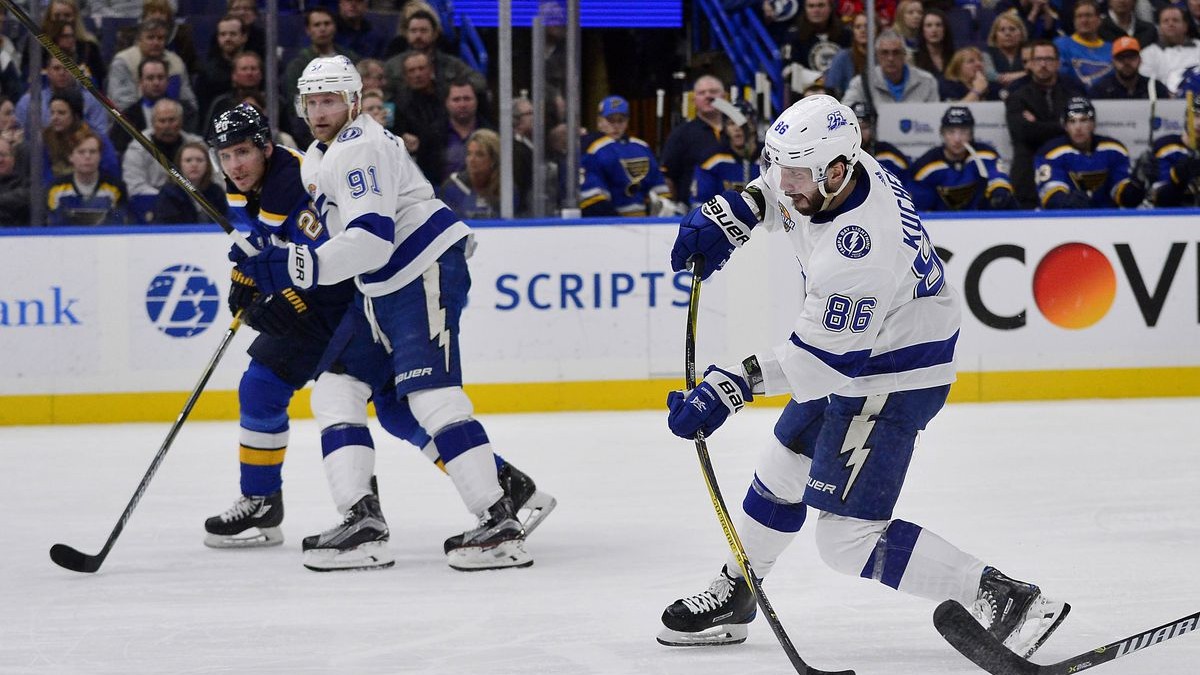 As we reach the half-way point of this hockey season, there comes the question of what teams should do. Should they make a deal and build for the future? Should they buy a player or two and go for it with all their chips pushed in? Or should they just do the boring thing and stand pat. Some people would think I’m insane to want the Blackhawks and Kings to deal away their highly skilled players now while they can get something worth value before age sets in. I always say it’s better to deal a year too early instead of a year too late, but let’s get on with what each team needs to do. I’m going to pound out four pieces consecutively here, representing each division and share with you each team’s wants and needs as seen through my eyes.

Look for the Metropolitan Division coming very soon for your viewing pleasure, and if you ever want to talk pucks or anything fantasy you can reach me @PolkaPat 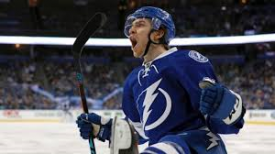 Brayden Point has been a very nice surpise for the Lighting

Stand Pat. Tampa has the deepest and most lethal team in the NHL and have been to the conference finals three times now. Tampa loaded up the back end last season by acquiring Mikhail Sergachev from Montreal for malcontent Jonathan Drouin, and then also grabbed Rangers Captain Ryan McDonagh and Dan Girardi from the Rangers. This season’s breakout of the year candidate Brayden Point has helped the cause immensely and contributions from lines three and four have made Tampa the team to beat in my eyes with Anthony Cirelli, Yanne Gourde, and Mathieu Joseph. Don’t forget about the top two lines with my man-crush Nikita Kucherov as he paces the NHL with 69 points as of this writing, with 20 goals and 49 assists, and nine of those goals coming on the man-advantage. Tampa is all set to dethrone the Capitals this season.

Make a Move. The Leafs need to add another top-four defensemen, but then again, who doesn’t? They’re getting good contributions from what they have right now in Morgan Reilly, but they really need to add a former Cup winner like when the 1980 Islanders added Butch Goring to let them know how good they really are. I would love to see the Blackhawks and Kings blow their teams up before their windows have closed. Treat this as a business and get all you can Chicago and build around Alex Debrincat now. They should send Keith or Seabrook to the Leafs or a package deal like Keith and Kane for a butt-load of prospects. Something of that nature would help, as the Leafs got pounded by Nashville recently and it may have served as an eye opener. They need to add some bodies with deep playoff experience to show the youngsters what it takes to win in the deeper rounds, and the Kings, Blackhawks, or St. Louis have the pieces every contender would kill for.

Make a Move. The Bruins need to deal, and they need to deal for some consistent scoring depth. I'm not bad mouthing the youngster infusion on the line-up, but an extra defenseman or two and a killer second line center would push the B’s even further into May and possibly June. The Bruins boast one of the best, if not the best, top lines in the NHL when Bergeron is completely healthy, and with Marchand and Pastrynk, these guys are amazing. Bid Z is not only a little long, but also a little long in the tooth and Charlie McAvoy has taken on much of Chara’s heavy lifting along with Tory Krug. The Bruins are 3rd in GAA, but 18th of 31 on goals for, and David Backes needs to earn his contract and give David Krejci some help to go along with Jake DeBrusk. A nice package deal with St. Louis or Ottawa to get Mark Stone, Matt Duchene, or Colten Parayko from the Blues would take the Bruins further on up the road. 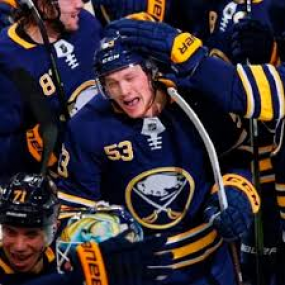 Jeff Skinner...no relationship to Seymour, has been a nice shot in the arm for the Sabres.

Make a Move...Maybe. The Sabres are in a tricky spot for me as they are playing really well this season. In particular, the addition of Jeff Skinner and Rasmus Dahlen have really benefitted the Lake Ontario Snow Babies. Jack Eichel is playing like a former second overall pick and the aforementioned Skinner is taking full advantage of lining up with a legit, difference making stud each night. I would like to see Buffalo add a Jeff Carter or Dustin Brown to beef up a bit before the second season begins, but I also don’t want the Sabres sacrifice the farm for a one year rush. On a five year plan, I’d say things are finally turning in the right direction, and certainly wouldn’t want to be the team to play Buffalo in the first or possibly second-round of the playoffs. It’s all growing bumps for a team with a bright future, albeit bright with six feet of snow.

Make a Move. The Habs pulled one out the other night in Detroit against a Red Wings team who is actually in a better place when looking to the future. Montreal is a hot mess and I would say sell in Montreal, but I’m really not sure who would get a valuable enough of a return to make Montreal sell. Shea Weber is obviously a step slower and coming off injuries...maybe Tomas Tatar? Please and no, so maybe Jonathan Drouin or Max Domi are the only pieces that would fetch anything of value in return, unless you’re dealing Carey Price. Florida, who I speak of next, needs a goalie in the worst way, as does Philadelphia.  Both teams current net minders have more leaks than the Iraqi Navy, so Montreal, sell what you can and keep building for the future  because you’re dead in the water this year.

Make a Move. This is one puzzle I cannot seem to solve. The Panthers are over flowing with talent with the likes of Aaron Ekblad, Huberdeau, Barkov, Dadanov, Yandle, Trocheck, and newcomer Mike Hoffman. Every player worth rostering fantasy wise is a minus player in plus/minus, with the exception of Aaron Ekblad, who is at +/- 0.  So two things need to happen for Florida to make a deep second half run. First, they need to tighten the defense up and quite playing like idiots. You guys are professionals and know how to play. Secondly, they need get rid of the goalies as Roberto Luongo is just not a star any more. Maybe inquire if the Kings need Jonathon Quick or if St. Louis needs Jake Allen. The Panthers core is young and very talented and they need to buy at this point...badly! An aging, once great goalie will not even get you into the playoffs, and with 41 points currently, keep your golf clubs polished. Lastly, Southern Florida loves showing up to games dressed as empty seats, and it’s utterly embarrassing. No wonder the Panthers play defense like shit because nobody is there to cheer or heckle them. Pull the trigger and add Jake Allen to your squad, and the fans may actually dress up in game worn sweaters instead of empty seats. Buy or Die with all that wasted talent Florida.

It's pretty obvious what the Wing need to do at the trade deadline...

Make a Move. This will be brief, SELL! The Wings need to sell as long as they can do se without parting with any of their up and coming studs, which Detroit has a few of in the minors. Once again, come trade deadline they can look to move Thomas Vanek, Trevor Daley, or Mike Green to teams that need a hired experienced body. Detroit may be able to capitalize on Gustav Nyquist being an UFA next year as well, and he would bring back a second or third rounder if the price is right. Along with Gus, Nick Kronwall is a Cup winning defender who is also a UFA, and he drops the hammer all the time, so they could get a pick or two for him as well. The Wings will be in sell mode until some of the young guns in Grand Rapids are ready for the big show.

Lastly, we look at the sad sack Senators. Ottawa traded away all but a few good players in the reality show Feuding Hockey Wives staring Mrs. Karlsson and current layoff Mike Hoffman. That leaves Mark Stone, Matt Duchene and Ryan Dzingal available to trade for even more draft picks, so Ottawa should clean house and keep the rebuild going. The Red Wings have 11 draft picks currently come June, and that will increase after the deadline, Ottawa only has seven and the names above could fetch a nice price from many contenders looking to beef up secondary scoring. The three names above are all UFA’s come season’s end, so look for all of them to be gone very soon.