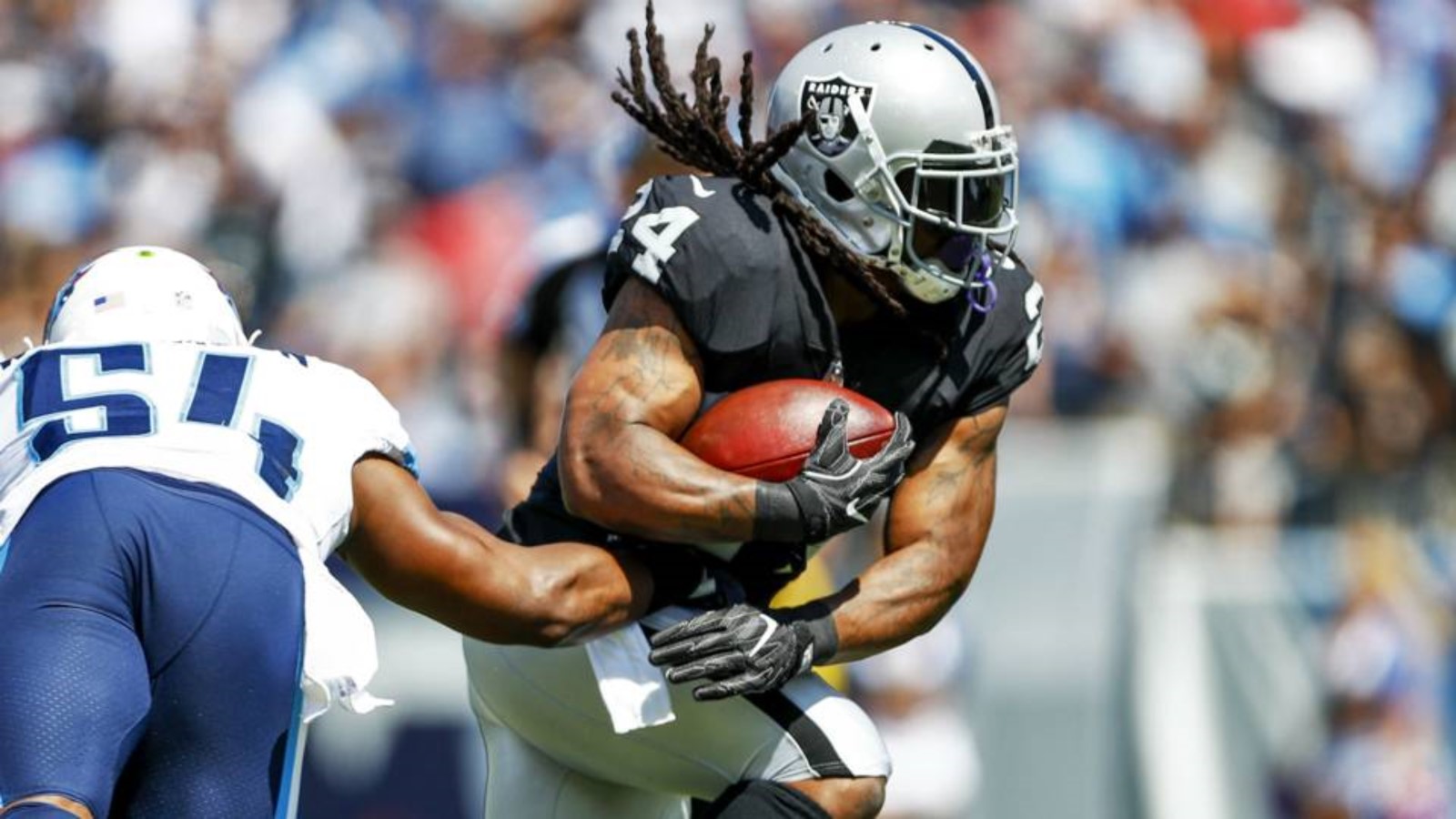 A few years ago I used to do a Twitter/Facebook Question of the Day to get some conversations going and I figured I would bring it back. People seem to like it and I got quite a few responses, so I bring you the…

Twitter/Facebook Question of the Day – Which late round running back will be the most fantasy relevant and why?

As you will see below there are a lot of different late round running backs that people expect to be fantasy relevant in 2018, but not one person gave the response I would’ve given. Let’s get into who they picked and at the end of the article I will let you know who I would pick.

@j2cain – Isaiah Crowell. No competition between the tackles. They’ve never liked Powell. If he can rush for 1k in Cleveland, no reason he cant do it again. 4.1 and 4.8 ypc last 2 years. He’s not exciting, but he has the volume upside.

@asylumfootball - Spencer Ware. Was the starter heading into '17 and Charcandrick West simply can't do what Ware can. Andy Reid has options now, and Ware is relevant.

@Roto_Wan - Kenneth Dixon has such an easy path to playing time. People forget how little the BAL staff trusted Collins for a large part of last season. It won't take many turnovers to remind them why.

Shane P. Hallam - Corey Grant will get a lot of work for Jacksonville and become a PPR flex player you can rely on. They seemed to implement him more and more toward the end of the season and will want to reduce Fournette's load to save him for a run.

@AndrewErickson_ - Elijah McGuire. I think the Jets move on from Powell based on his 4 million cap hit and McGuire finds himself in a space back role. Negative game script should have him see volume.

Michael Nissen - Nick Chubb is a guy I like in round 9 / 10... . They spent a 2nd round pick on him and he will win the starting RB job. Carlos Hyde is like Latavius Murray. The Vikings signed Murray and drafted Dalvin Cook. DC won the starting job.

@TheOnlyJenSmith - Nyheim Hines. You're going to pay next to nothing for him. News out of camp is that they're using him everywhere and coming up with ways to get him involved. Dynamic guy. Turbin now suspended. Def questions about usage, but certainly value at 12th round+ ADP.

@SchaufDS - Nyheim Hines. The Colts’ RB picture is far from clear. The incumbents are recovering (Mack) and pedestrian (Turbin). The WRs look weak. The new staff clearly has immediate plans for Hines. And I think his rushing skills are generally underrated.

@TheyWereKones - Rex Burkhead. In weeks 7-15, when he was healthy, he was one of only 3 backs that had 85+ touches and greater than 1 fantasy points-per-touch over that period. The other two backs? Gurley and Kamara. He also had a healthy 47.8% touch rate during that time.

Jason Duvall - Marshawn Lynch. Because of Gruden’s old school approach + faith that the guy still has some juice.

@MichaelGreen311 - Kenneth Dixon. Chances are he's still the most talented RB on the roster but wasn't able to showcase it with last season's injury. I think Collin's is "just a guy" and that Dixon will usurp him before long.

@ConsultFantasy - Doug Martin is a player I like at his current ADP in the 10th round. Question marks for sure, but a 32-year-old Marshawn Lynch is all that stands between Martin and the potential for a heavy workload in a Jon Gruden offense that has a lot of history generating fantasy-relevant RBs.

@AndyZink113 - Kenneth Dixon. Competition isn’t that bad with only Buck Allen and Alex Collins in his way. Dixon is the morphed version of both with three down back potential. ADP 178 on DRAFT on a team that was 29th in passing yards last season and 11th in rushing yards and their biggest pass threat is WR Michael Crabtree.

@DFFMemphis - Nyhiem Hines - Frank Reich and that Philly RPO offense - easily the second most explosive offensive player on the roster - improved offensive line - Only competing with Mack and Wilkins, neither are the receiver he is - Negative game scripts are good for PPR backs.

@SkeeterRobinson - Darren Sproles. I still think he will have some sort of role in Philly, and has put up some random big games in the past. It would really be useful if one of those games come during a heavy bye week.

@AJStans23 -  Tavon Austin. Dallas is hyping him up + Zeke is not strong at catching passes + weak WR core + backup RB? = Some decent fantasy points. If he does good the first few weeks, he could be trade bait for an RB upgrade or package deal.

@nickdip83 - Chris Thompson is a PPR machine. I know the Redskins just got a new shiny toy but Thompson's been producing for them for a couple years now and seems to get a surprising amount of long touchdowns.

@RFLRedZone - Kenneth Dixon. Underrated because of Alex Collins and Buck Allen in front of him. Collins can’t catch and Allen is not an every down back. You know who is both? Dixon.

@Fantasytillman – Kerryon Johnson. Can be a 3-down back and is by far best talent on roster at RB.

@ZebrowskiPaul - C.J. Anderson. Anderson had a good year last season behind a non factor QB. With a mobile Cam Newton and a better offense he could be in line for another solid year.

@fstball3232 - Payton Barber. He has been in Dirks system and he trusts him to grind out those last few yards in the red zone with only a rookie in front of him.

@sfpd2217 – Royce Freeman just for the reason that they let a 1,000 yard back go and Booker couldn't win the job outright.

Mark Morales-Smith - Kerryon Johnson is going to be a monster. Loved him at Auburn and think he becomes the high volume guy in Detroit they’ve been lacking for years.

@Dismattle - Jeremy Hill If he can avg 5 YPCin Cincy as a rookie. Just think about what he can do in NE being a vet and only 25 yrs old.

Some solid names on this list, a few that I think have a chance to out-produce their current ADP by a decent margin, but as I said not one answered the same as I would’ve answered.

For me the choice is hands down Minnesota running back Latavius Murray.

I love Dalvin Cook and I think as long as he’s fully recovered from his ACL injury from last year that he has every chance to be a Top-5 back, but there is never any guarantee that he will get back in time or not suffer any kind of setback.

Murray is the guy that would benefit if Cook isn’t ready or goes down again. Over the last 11 games of 2017 Murray was the 10th-best RB in PPR leagues, averaging 14.7 points-per-game. Over that span he scored more on average than early round picks Leonard Fournette, Christian McCaffrey and Devonta Freeman and that was with Jerick McKinnon still on the team.

McKinnon is now gone and Murray will be the guy if anything happens to Cook and with Murray’s current ADP of 156, or pick 13.12, he is too much value to pass up at that point. Plus if you are lucky enough to get Cook then Murray is a great handcuff that costs you nothing.

If you don't like my choice or want to discuss more you can find me on Twitter @Fantasytaz.