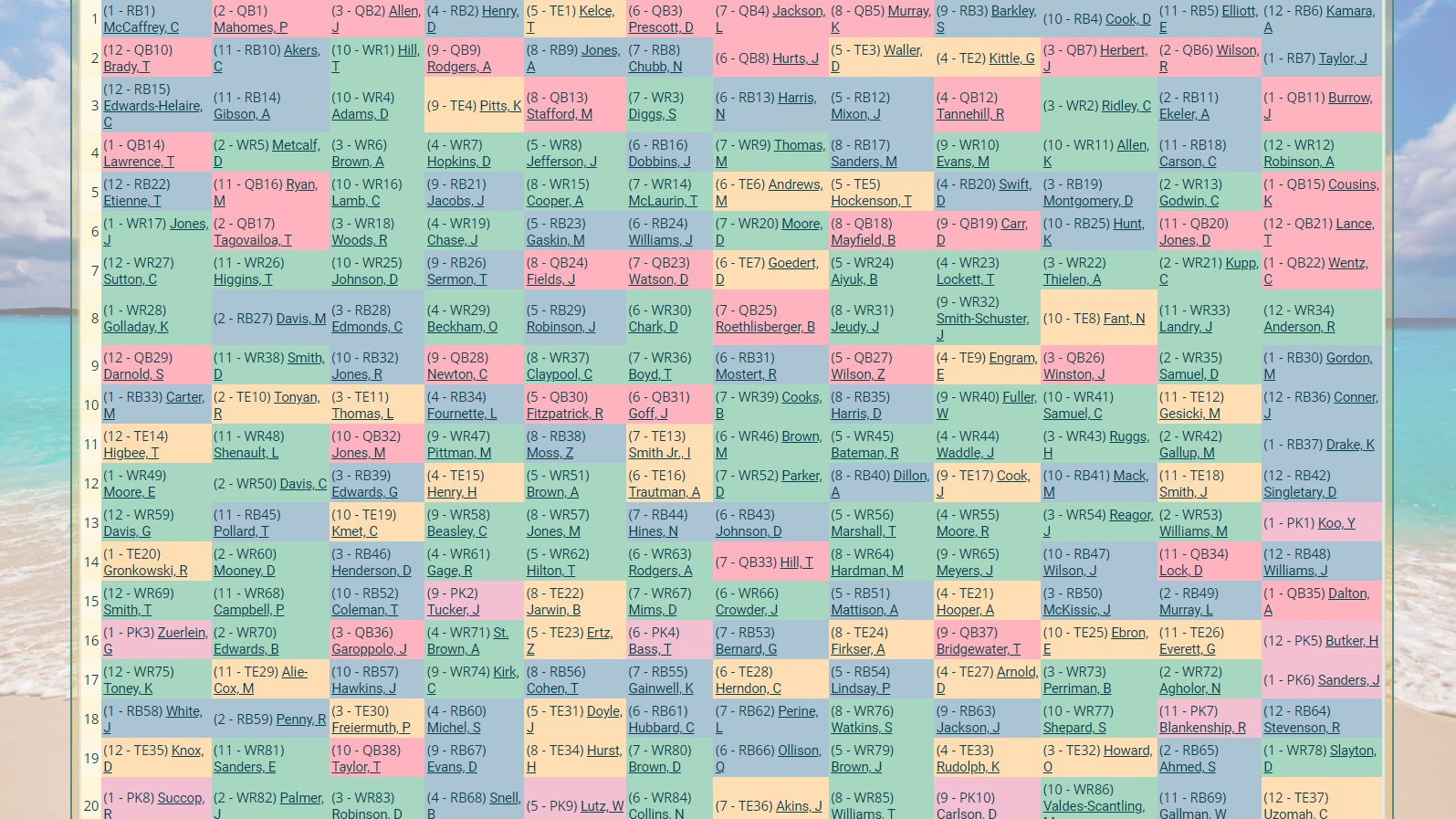 At this time every year, thousands and thousands of fantasy football experts and fans cross their fingers and say a Hail Mary or two, hoping that when they check their email, they will see an invite to the Scott Fish Bowl. There’s a sign-up list at the Scott Fish Bowl website with over 11,000 experts and fans yearning to receive an invite. SFB11 will be hosting 1,920 fantasy football managers this year, all vying to be king of the hill. A number of these managers coming from Fighting Chance Fantasy, including of course, the winner of Scott Fish Bowl 9, Gary Haddow.

For the last ten years, Scott Fish has created a wonderful fantasy football community that combines the fun of fantasy football while giving to others. This movement is known as #FantasyCares. This prestigious league is free, but all that's asked is for you to donate to your favorite charity in various ways. Scott’s favorite charity is Toys for Tots toy drive, which so happens to be one of my favorite charities as well. I also want to take this time to thank Scott, Ryan McDowell, and John Bosch, along with anyone else from behind the scenes that have helped put this massive event together.

If you want to donate to Fantasy Cares, you can do so here!

I’ve been blessed to be invited to this fantastic league for four years, including this 11th year. There are draft spot position chat groups that form to discuss strategies and mock draft frenzy that occurs as soon as fantasy managers are placed into their respective divisions. This year’s theme is Music, with each division being named after different musicians. Luckily for me, I was placed into the division of my favorite band of all time, Metallica, with the 1.01 draft slot.

I have some of fantasy football’s sharpest minds in my division, including one of the godfathers of fantasy football, Bob Harris. Also in this division is John Evans, one of my fellow league mates from the #HollywoodBeerLeague, and he has been one of the best drafters I’ve ever gone up against in any league I've been in. So my draft game must be up to the task if I want to survive this pool of sharks I’m swimming in. Now, onto the #SFB11 mock draft observations!

With this being a Superflex league, if you want a stud quarterback, you better grab them early because the top-shelf talent flew off the board. Ten of the first 24 picks addressed the quarterback position, and by the third and fourth round turn, the top-14 quarterbacks were already selected. The key to solving the quarterback riddle may be which and when to grab that second quarterback. All that will be determined by what your draft spot is and how the draft falls to you. In this particular draft, it does appear that you can wait to draft your second or third quarterback if you like rolling the dice until the ninth or tenth round. I, on the other hand, am no gambler.

The only thing if you choose to wait on drafting your quarterback that late, you better make sure to select your quarterback wisely because if that second quarterback spot is consistently unproductive, you will be cooked in the Scott Fish Bowl. Some of the quarterback gems in this area are Cam Newton, Zack Wilson, Sam Darnold, Jameis Winston, Ryan Fitzpatrick, and Jared Goff.  If you're even more of a gambler, there were even a few quarterbacks going beyond the 14th round with the likes of Taysom Hill, Drew Lock, Andy Dalton, Jimmy Garoppolo, and Teddy Bridgewater. They are all quarterbacks amidst battles at the position when training camps open up in a month.

The running back position went toe to toe with the quarterbacks as the most drafted position in the first two rounds, with ten running backs. In this draft, it appears that the #ZeroRB theory was thrown out the window by 11 of the drafters, as only one team chose to zig when everyone else was zagging. Solid running backs were available in the third and fourth rounds, but the running back position seems to get murky after the fifth and sixth rounds. If you want to get solid running back depth, you better hit the position early because you will have to see how your draft progresses to see when to pounce on the position from the sixth round on.

The eighth to the twelfth round range may be a good area to add some additional running back pieces to get you ahead of the game. With Mike Davis, Chase Edmonds, James Robinson, and Melvin Gordon going during this stretch of the draft could be beneficial if you decide to wait a bit on scoring some running backs if you choose to go #ZeroRB the draft. After the twelfth round, most of the running backs taken are just lottery tickets that drafters will hope to cash out during the season.

The first thing I will say about the wide receiver position in your respective Scott Fish Bowl draft is to wait on drafting wide receivers. With most fantasy drafters surely hammering the quarterbacks and running backs position in the first two rounds, the top wide receivers will fall to the third and fourth rounds. The opportunity should be there to have great value in receivers in those rounds. The fifth round to the eighth round has excellent receivers available that will allow you to build incredible depth on your rosters. Throughout the entire draft, it seems you can add wide receivers at will that will be contributors in one way or another.

With the Scott Fish Bowl being a tight end premium league, the big three, Travis Kelce, George Kittle, and Darren Waller, were all gone by pick 17. Therefore, if you want to get that extra tight end edge, you better pull the trigger early on in your draft. The next tier will be coming off the boards between the third and fifth rounds, consisting of T.J. Hockenson, Mark Andrews, and electrifying rookie Kyle Pitts. After that tier, you should let the draft play itself out and snatch your tight end when the time is right. It seems from the ninth to the eleventh round range that will be the prime time that most drafters will be drafting their tight ends, so if you want to be ahead of that curve, select your tight end before then.

Kickers, who said anything about kickers? Being the mastermind that Scott is, he decided to throw a wrench into everyone’s plans this year. He inserted the kicker position as being an option in up to four flex positions for fantasy drafters. Meaning you can technically start four kickers in this league. Now typically, kickers are always an afterthought in fantasy drafts. Usually, kickers will be rounding out the final rounds of fantasy drafts, but here in SFB11, they will be going sooner rather than later. With a league of this size, drafting the right kicker may be the difference between winning the championship.

Since this league has 11 starters with 22 roster spots, the pickings will be slim on some weeks, especially during byes, and having a kicker or two or even three could be a better option than your fourth or fifth-ranked running back or wide receiver. For particular mock, kickers started coming off the board in the early 13th round, so that is something to keep in mind.

Hopefully, I have provided some insight into your respective SFB11 drafts. Each draft is its own animal, and doing mocks is a roadmap of what may happen during your experience. If you've participated in the Scott Fish Bowl in the past, if this is your first season or just a casual observer, one thing I can say without a shadow of a doubt when drafting in the Scott Fish Bowl, just like Big Brother, expect the unexpected.

If you would like to discuss further or have any fantasy questions, you can reach me on Twitter @smooth1074.

Good luck and happy drafting, everyone!