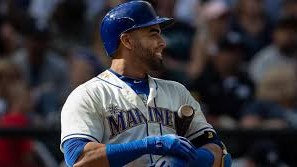 The AL Central is a fairly uninspiring division. The Indians have won it the past couple years fairly comfortably, and even though they seem to have taken a step back this year, I expect them to win it again. There have been some moves made by every team to keep this article interesting so let’s take a look at the old faces  in new places that now call the AL Central home.

Nelson Cruz, DH, Minnesota Twins. Cruz has bashed between 37-44 home runs in the last five years, and although he hit just an average .256 last season, he has usually hit at least .275 in most of the last five years, which is pretty good for a slugger. He goes to Minnesota which isn’t a hitters paradise, but he’s spent the last four years in Seattle which sucks for power too, so clearly it doesn’t matter where Cruz calls home. He might get off to a slow start with the cold weather in Minnesota, but all in all I expect another 35+ home run season. The only knock that I have on Cruz is that he is generally only Utility eligible across most fantasy formats.

Carlos Santana, 1B, Cleveland Indians. After leaving Cleveland for just one season, Santana is back with the Tribe where he spent the rest of his career. The guy isn’t an All-Star, and his batting average is usually lacking, but in this day and age of the crap that is the first base position, Santana still has value. I believe that he will hit about .245 with 25 home runs and knock in around 80 RBI. Definitely not a starting fantasy first baseman, but Carlos is still a solid contributor and is a great choice for a corner infield spot as he returns home to Cleveland where he spent many successful seasons.

Jonathan Schoop, 2B, Minnesota Twins. After back to back solid seasons for the Orioles, Schoop definitely took a step back in 2018. Sure, he still hit 21 home runs, but his batting average was absolute trash as he was injured and also split time between Baltimore and then Milwaukee after being traded. Schoop now calls Minnesota home. I am a bit worried that the move to Target Field will sap some of his power, but I still think that 20 home runs is in the bag and he could hit 25 again. While he will never win you a batting title, I think he can keep his average around .270 and be a solid contributor at the second base position and someone you can feel comfortable with being your starter.

C.J. Cron, 1B, Minnesota Twins. After three straight years of hitting exactly 16 home runs as a part time player for the Angels, Cron lived up to his slugger hype when he popped 30 dingers for the Rays last year in 501 at-bats. He strikes out a lot (who doesn’t), and his batting average is nothing to get excited about (around .250), but he is a guy that you are taking in later rounds. While I think he continues to show solid power, I expect him to land more in the 25 homer range than 30 and can be a solid choice as your corner infielder in leagues that require that position.

Marwin Gonzalez, UTIL, Minnesota Twins. When he signed it was unsure where his at-bats would be coming from, but with Miguel Sano likely to miss the first six weeks of the season, Gonzalez will at least begin the year with regular playing time. Gonzalez isn’t a world beater, but he’s a nice solid contributor across a few categories. His batting average took a huge dip last season, but he is one year removed from hitting .303. I expect him to be a guy to hit around .270 with 15 or so home runs and drive in 70-75 runs assuming he can stay in the lineup and get 450-500 at-bats. I have drafted Gonzalez on multiple rosters already and his position eligibility makes him desirable in almost any format.

Yonder Alonso, 1B, Chicago White Sox. After having what can only be described as a shit-tastic career to start, Alonso has seemingly figured it out the past two years with 51 home runs splitting time between the Indians, Mariners, and A’s. He now goes to Chicago which is a pretty hitters friendly park, and while he isn’t a batting average machine, his .250-.260 is decent enough to keep you happy. I’m still a little skeptical, but I would feel comfortable if he was sitting in my corner infield spot, but I do not think he will finish among the top 12 fantasy first basemen.

Jake Bauers, 1B/OF, Cleveland Indians. Bauers has a great deal of power, and flashed some of that in 2018. He also hit for a disaster of a batting average as he was only one point over the Mendoza Line. I do expect Bauers to continue to develop and to hit for a much better average as he was consistently in the .260s and .270s in the Minors. Whether he plays first base, the outfield, or DH, Bauers has a lethal bat, and is one of the fine up and coming hitters in the sport. He is an exciting young talent, and definitely someone I would like as my fourth outfielder or corner infielder. I am hoping for great things for this kid this year.

Billy Hamilton, OF, Kansas City Royals. The very definition of a one trick pony, Hamilton really only helps you in stolen bases, and last year he wasn’t even elite in that. He has only hit over .250 once in his career so his batting average sucks, he’s only scored over 80 runs once in his career, so he’s not a huge contributor there, and his career high is six home runs. I wouldn’t touch Hamilton with a ten foot pole, but if you do, just know you are only getting steals.

Ivan Nova, SP, Chicago White Sox. Nova has been a guy who seemingly has been pretty close to figuring it out and becoming a fantasy asset, but never quite coming through and fulfilling that promise. Outside of his initial stint with the Pirates, he consistently has been a guy with a win/loss record around .500, less than a strikeout an inning, and an ERA around 4.00. He goes to a White Sox team that is hoping to improve slowly, but should be at or near the bottom of the standings this season. I am not interested in Nova for 2019 except in the deepest of leagues.

Hanley Ramirez, 1B/OF/DH, Cleveland Indians. Man, this guy has been around forever. He has had some real trouble staying healthy, but has always been productive when he has been out there. He doesn’t have many hits this Spring, but the ones he has have definitely counted. There’s no way that I draft Hanley, but if he breaks camp with the team and gets off to a good start there is a chance (and yes, I said chance) that I would consider his old ass as a bench option. I’m not expecting much from him in 2019.

Matt Moore, SP, Detroit Tigers. Once a hugely touted prospect of the Tampa Bay system, Moore’s career got off to a great start before Tommy John and then other subsequent injuries derailed his career. His ERA has never been under 4.00 since, ballooning to the 6.79 it was last season. His strikeout rate has dropped after his injuries, and he goes to a Tigers team that is going to suck this year. I really can’t see any scenario where Moore is fantasy relevant this season.

Homer Bailey, SP, Kansas City Royals. Throughout his entire career I’ve always asked how you can trust a pitcher named Homer. And while I have given him chance after chance, Bailey has never been good. In fact, the last four years he has down right SUCKED! The guy was 1-14 last year and has had an ERA over 5.50 in each of the last four seasons. There is NO scenario where you should consider Bailey for your rosters.