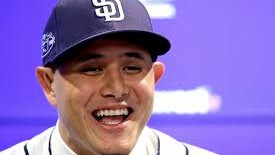 The NL West is always an interesting division when it comes to free agency. The Dodgers are always major players, the Giants usually jump up and grab one or two, and few players tend to go to Colorado, Arizona, or San Diego. However, Things changed a little this year when one of the biggest fishes in the free agent pool went to San Diego. Let’s stop with the cryptic intro and get down to business.

Manny Machado, 3B, San Diego Padres. The market for Machado certainly wasn’t as bullish as everyone predicted when this young stud hit free agency, but in the end he still got his $300 million contract over 10 years. The Padres grabbed Eric Hosmer last year, and now this year land Machado. If some of these young prospects can come up and play, San Diego could be pointing in the right direction. Petco Park is one of the worst places for power hitters, but Machado is ballpark proof. His home runs might go from the high 30s to the low 30s, but he still should have a fantastic season. Look for him to also hit around .290 and steal you around ten bags.

Ian Kinsler, 2B, San Diego Padres. Kinsler’s home runs have been dwindling the last three seasons, but he still is fantasy relevant at a position without much depth. Calling Petco Park home won’t help the 36 year old Kinsler either, but all hope is not lost. Health has always been a concern with him, and being on the high side of 35 doesn’t help this cause. I expect somewhat of an uptick in batting average to around .255 with 18 homers and about ten steals. In leagues that require middle infielders, I think Kinsler is a solid choice if you wait to fill that hole.

A.J. Pollock, OF, Los Angeles Dodgers. If health is a bit of a concern for Kinsler, it is a monster concern for Pollock.  He has missed at least 50 games in each of the last three seasons, including almost all of 2016. However, the payoff for the gamble on health is substantial. Pollock is a 20/30 threat with the capability for hitting for a strong batting average. However, you have to worry some if these injuries are starting to pile up on him a little. If you are in a league with at least two DL spots or a large bench I can see giving Pollock a spot on your roster, but personally I will  be staying away from him this season as the risk is too much for me to stomach.

Daniel Murphy, 2B, Colorado Rockies. After back to back MVP-caliber seasons, Murphy shit the bed royally in 2018 for both the Nationals and the Cubs. He takes his talents to the thin air of Coors Field in an attempt to get that magic back. Murphy will be 34 years old when the season starts, and to me feels like an old 34. If he can stay healthy, this could be a bounceback season for Murphy. Colorado has proven to be the best medicine for a player who is down on his luck in the power department. I don’t expect Murphy to top 30 dingers by any stretch, but I think the move to Coors can get him back in the mid 20s, and an average near .300. Murphy is a solid choice as your starting second baseman.

Luke Weaver, Arizona Diamondbacks. When the Snakes traded away Paul Goldschmidt, one of the prizes of the deal was Weaver. He was a former first round pick of the Cardinals, and although he wasn’t very good in 2018, he certainly showed some flashes the season before. He has good, but not elite strikeout potential, and playing in Arizona should help keep the home runs down with their cavernous center field area. Weaver has the potential to be a really good fantasy starting pitcher, but right now I would try to slate him in as my fifth or sixth starter in my fantasy rotation.

Greg Holland, RP, Arizona Diamondbacks. Geesh, what a tale of two seasons for Holland in 2018. He was one of the last free agents signed to the St. Louis Cardinals last season, and basically had no Spring Training. Well boy did it show with an ERA near 8.00, Holland was so bad that he was flat out cut by the Cards. The Nationals picked him up and he was much better with an ERA and WHIP under 1.00 in 24 appearances. Now, Holland competes for the closer’s job in Arizona. Which Holland will we get? The stud or the dud? Could the lack of Spring have affected him so much, and then once he got into a groove later in the year that he was his old self again? I think that might be the case and Holland will win the closer’s job in Arizona and be a mid level guy for saves in 2019.

Wilmer Flores, 2B, Arizona Diamondbacks. This was an underrated move that I think could have a nice payoff. Flores never got a chance to play full time really for the Mets, but when he was in there he was always a decent hitter. In fact, until last season, Flores always tore up left handed pitching, a skill that is valuable. Despite never getting 400 at-bats in a season, Flores has hit 45 homers in the last three seasons combined. He looks like he will start at second base for the Diamondbacks, which should give him a real shot at 20 home runs. I’m not saying that he is an elite guy at the position, but late in drafts as your middle infielder I think you can do a lot worse than Wilmer Flores.

Gerardo Parra, OF, San Francisco Giants. ******fart noise****** can we just move on and finish the article? The guy has a hard time staying healthy, and sure he can steal a few bases, but I am just not a fan. He doesn’t really help you in any category really, and unless you are in a deep five outfielder league I wouldn’t look his way.