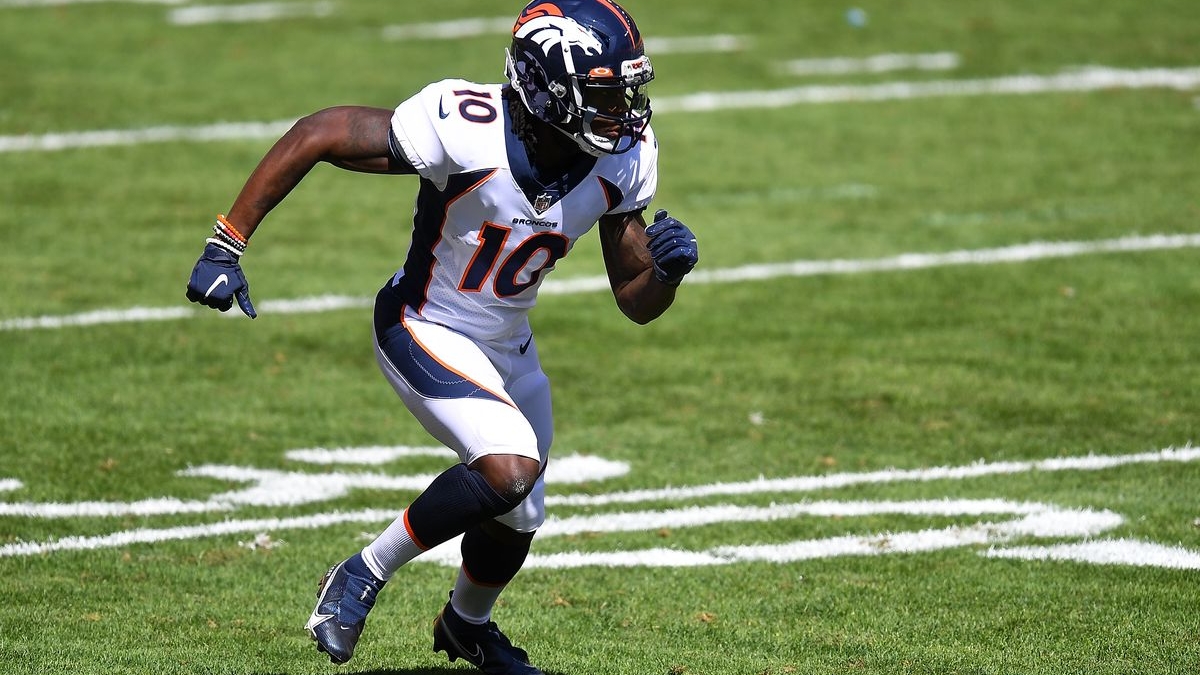 When looking at data for wide receivers, Jerry Jeudy and Marquise Brown jumped out, particularly in terms of air yards. Both receivers rank highly in air yards, but the receiving production doesn't rank highly partly due to the high average depth of target (aDOT) and other efficiency metrics. In this fantasy football player breakdown, we analyze air yards, aDOT, and other advanced metrics for Jeudy and Brown to help us figure out what to expect moving forward.

At first glance, it appears that Jeudy is trending up while Brown is trending down. However, when considering their respective quarterbacks, theoretically, Brown edges out Jeudy at the moment. In this article, we analyze and breakdown Jerry Jeudy and Marquise Brown. With that said, let's dive in.

Even his NFL Draft workout metrics ended up slightly above average or below average with a 4.45, 40-yard dash (80th percentile), 98.4 Speed Score (64th percentile), and 119.5 Burst Score (41st percentile). With Jeudy, we have to consider more than just the College Prospect Profile since it doesn't paint a clear picture.

Given that Jeudy receives targets down the field with a 14.5 average target distance (No. 20), it's unsurprising to see a discrepancy in his receiving productions. However, the Broncos rank 9th with 39.5 team pass plays per game and 3rd with a 2.40 pace of play. That means they throw a bunch and average 2.40 plays per minute, which benefits the receivers such as Jeudy.

As we dive into the efficiency metrics, unsurprisingly, Jerry Jeudy ranks low due to relatively poor quarterback play. Jeudy's lack of efficiency is evident in his 15.9 yards per reception (No. 17), 7.6 yards per target (No. 76), and -17.6 Production Premium (No. 74). Although Drew Lock missed time due to injuries, he started most of the games for the Broncos. With that said, Lock's lack of efficiency connects to Jeudy's struggles as well. Lock ranks 28th with 6.6 yards per attempt, 33rd with a 22.7% deep ball completion rate, 34th with a 28.9% pressured completion rate, and 28th with -19.4 Production Premium. When seeing all of that, it tells us that Jeudy's production, opportunity, and efficiency correlates with Lock's struggles.

Given the decent target share and air yards share, Jerry Jeudy ranks 26th with a 0.54 Weighted Opportunity Rating (WOPR) right in front of Jamison Crowder. WOPR takes into account target share plus air yards share, and when a receiver scores highly in WOPR, it translates to higher WOPR scores, which sometimes predicts future fantasy production. Unfortunately for redraft and dynasty leagues, Jeudy's inconsistency and lack of efficiency connect to the poor quarterback play. However, there are reasons for optimism over the past four games. During that stretch, Jeudy earned 40 targets, 18 receptions, 303 receiving yards, and one touchdown. If the quarterback play improves, then stock up for Jeudy.

What's happening with Marquise Brown? After an efficient 2019 where Brown finished with a +14.0 Production Premium (No. 21) and 2.06 Fantasy Points Per Target (No. 19), he struggled in several metrics. However, the season-long opportunity and production tell us a different story with an 18.9% target share (No. 44), 13.3% Hog Rate (No. 48), and 10.5 fantasy points per game (No. 49). In 2019, Brown scored seven touchdowns (No. 13) for a 15.2% touchdown rate that screamed regression. Keep in mind quarterback Lamar Jackson also finished with an extremely efficient 2019 season with +40.3 Production Premium (No. 2) and 36 passing touchdowns (No. 1) or a 9% touchdown rate on 29.3 team pass plays per game (No.32). Similar to Jeudy, the productivity and efficiency of Lamar Jackson will impact Brown.

In 2020, the Ravens slightly increased their pass volume to 30.3 team pass plays per game (No. 30), but Lamar Jackson regressed with a -3.1 Production Premium. With that said, it makes sense to see Marquise Brown underperform so far in 2020. So far this season, Brown earns a 21.5% target share (No. 31), 889 air yards (No. 15), and 37.6% air yards share (No. 7). According to AirYards.com, Brown ranks 15th in Weighted Opportunity Rating (WOPR), which takes into account a receiver's target share and air yards share. As we mentioned in a previous article referencing unexpected fantasy contributors, WOPR tends to help predict future fantasy production. However, through ten games, Brown hasn't produced with 32 receptions (No. 52), 431 receiving yards (No. 53), two touchdowns (No. 57), and 7.1 fantasy points per game (No. 71) in 1/2 PPR scoring.

In the 3 games since the Ravens' Week 7 bye:

Fantasy managers, including myself, continue to wait for the opportunities to turn into fantasy production. However, Marquise Brown hasn't produced or proved efficient so far in 2020. With the extreme efficiency in 2019, Brown was due for regression based on the opportunities. One reason for optimism moving forward involves his matchups rest of the season. Brown faces the Steelers (No. 15), Cowboys (No. 2), Browns (No. 10), Jaguars (No. 6), Giants (No. 17), and Bengals (No.7) over the next six weeks. Those rankings indicate where the teams rank in fantasy points allowed to the wide receiver position, most of which look like fantasy-friendly matchups. There's a big IF whether Lamar Jackson's productivity and efficiency will improve throughout the rest of the season.