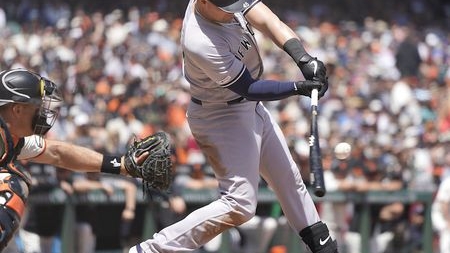 Two hitters are trending in opposite directions, with Luke Voit trending up and Bryan Reynolds trending down. In a full season, we're able to show patience. However, we can't use the wait and see approach in a shortened season. Voit and Reynolds were two hitters that I loved drafting this season. Unfortunately, only Voit panned out so far. We'll look at their surface stats, batted ball profile, plate discipline, and Statcast data to explain what's going on.

Coming into the season, Luke Voit carried the best shape of his life narrative, and it proved to be fruitful. So far, Voit has 13 home runs, 23 runs, 28 RBI with a triple slash of .293/.359/664. Voit is better suited for OBP leagues, but we love the high batting average for the power-hitting first baseman. Interestingly, his 6.6% walk rate is down from 11.2% career walk rate while his 27% strikeout rate is similar to his career average.

A potential contributing factor to the lowered walk rate is his plate discipline, where he’s making more contact overall, particularly outside the zone. Voit’s 72.4% contact rate is up almost 6%, and his 57% O-Contact rate is 13% higher than 2019. Overall, Voit’s swinging more while also making more contact inside and outside the zone, and therefore a lower walk rate.

When looking at Voit’s batted ball profile, the main differences include a lowered ground ball rate and an increased fly ball rate with line drives staying relatively the same. The 41.8% fly-ball rate jumped up 7% while the 32.9% ground ball rate decreased by almost 7%. The pull-heavy approach (49.4%), paired with the increased fly balls, typically lends itself to more power. Through 117 plate appearances, Voit has over half of his 21 home runs that he totaled 510 plate appearances in 2019. Voit’s more aggressive approach has yielded positive results across the board.

With the batted ball data, plate discipline, and Statcast data, Voit is breaking out in 2020. Voit has displayed the typical power hitter approach with the increased pull rate and fly balls. On the FantasyPros Player Rater, Voit ranks as the second first baseman and the 18th overall hitter in rotisserie leagues. If the trade deadline has not passed in your redraft or dynasty league, then attempt to acquire Voit even if his value is high.

After seeing changes in his walk and strikeout rate, it leads us to check his plate discipline. His contact rate inside and outside of the zone dropped about 3-4% each, and Reynolds is making less contact overall. The 70.8% zone swing rate dropped around 4% while the swinging-strike percentage increased by 1%.

When looking at his batted ball profile, Reynolds’ 23.9% line drive is identical to his 2019 line drive rate. He increased his fly balls and decreased ground balls by about 6% each while also pulling the ball 5% more with a 43.3% pull rate. As a switch hitter, Reynolds typically sprayed the ball evenly to the pull side and center field.

The Statcast data is rough. His 87.8 mph average exit velocity (37th percentile) and 37.3% hard-hit rate (48th percentile) both dropped while his 7.5% barrel rate (53rd percentile) slightly increased. Also, Reynolds expected stats all rank in the 33rd percentile or worse. Although we may not expect his Statcast data to jump off the page, the lowered quality of contact is quite concerning.

Reynolds is struggling against all types of pitches, which is another reason for his struggles. Check out the differences in results against fastballs, breaking balls, and offspeed between 2019 and 2020.

Reynolds is struggling significantly across the board, and in most leagues, he is likely floating on waivers. Before digging into Reynolds, I hoped to find signs for improvements moving forward. However, several concerns are surrounding Reynolds. Unless it’s a dynasty league, the reasons to drop him outweigh the reasons to hold on in redraft leagues. Next season, Reynolds will likely have a lowered ADP, which is a silver lining in this situation.