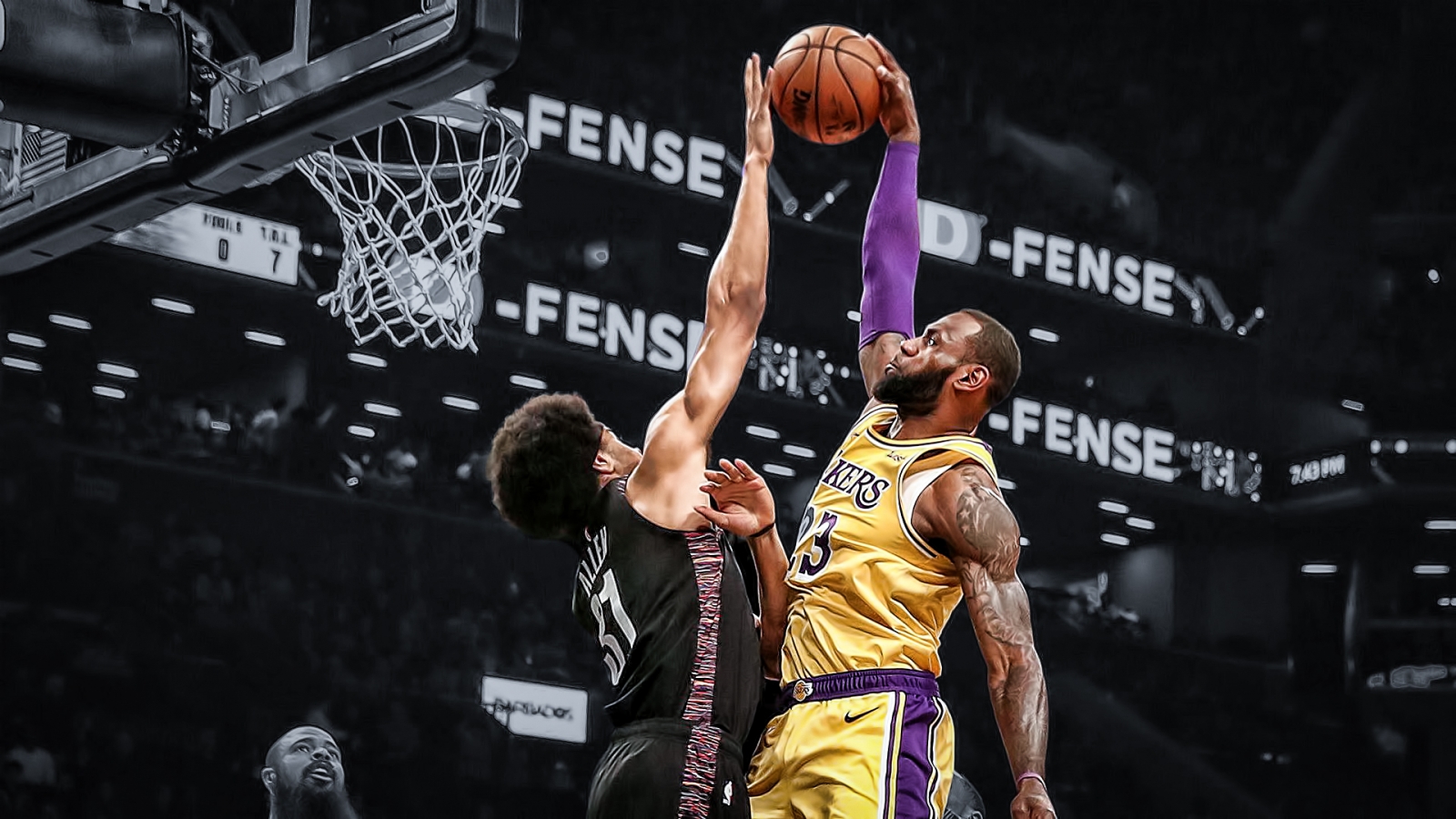 Players that will burst the Disney Bubble

You can find us on Twitter @KayvonEzami and @smooth1074

The NBA is back. After five months of no NBA games, we are now two weeks away from live games back on our television. A lot has changed since that last NBA game on March 11. As the league prepares to restart at the ESPN Wide World of Sports Complex in Orlando, Florida the end goal remains the same for all 22 teams participating. Win the championship. The only difference is many teams are living by the infamous sports manta “next man up." The NBA granted permission to players to sit out if they do not feel comfortable going into the bubble. We are going to take a deep dive into some of the players that will benefit from their teammates sitting out.

Allen has a chance to explode in the Disney bubble when the NBA season resumes at the end of July. When the season began Allen was part of the starting five for the Nets logging in a season-high 28.9 minutes and averaging a double-double per game after the month of January under Coach Kenny Atkinson. Coach Atkinson was let go by the Nets in March and one of his assistants Jacque Vaughn was named interim coach. Towards the tail end of Coach Atkinson's tenure, Allen saw his rebounding stats dip below ten rebounds a game. To make matters worse, Coach Vaughn decided to bench Allen for veteran DeAndre Jordan. This led to Allen’s average minutes to fall around 21 minutes a game and his stats continued to tumble down. 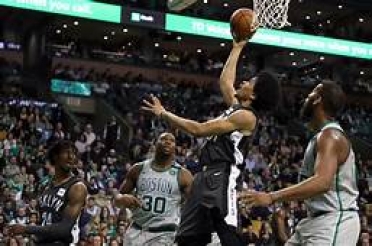 Now with the restart of the NBA season, comes the unfortunate news that DeAndre Jordan contracted COVID-19 and will not join his Nets teammates in Orlando. Furthermore, hotshot rookie Nicolas Claxton who was tearing it up in G-League is also out for the year due to arthroscopic surgery to repair his left shoulder. That leaves Mr. Allen as the last man standing. The center should post double-double figures hovering around 12 points and ten rebounds the rest of the way while posting over a block per session. If you're playing DFS, Allen should be a player that you should try to insert in your line-ups.

When the Washington Wizards traveled to Orlando earlier this week to participate in the restart of the NBA season, they did not bring with them their two leading scorers for the 2019-20 season. All-Star guard Bradley Beal and sharpshooter Davis Bertans have informed the team that they will not be attending the bubble. The Wizards are currently five and a half games behind the Orlando Magic for the number eight spot in the Eastern Conference playoffs and would need to pull to within four games to force a play-in game. For that to happen, other players are going to need to step up to give the Wizards a chance. Washington will now turn toward its youth during the eight-game schedule in Orlando, most notably rookie Rui Hachimura who was having an impressive season before the hiatus. 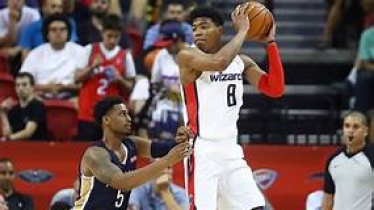 Hachimura, the Washington Wizards first-round pick in the 2019 NBA Draft, told reporters on Thursday that he spent the majority of quarantine working out in his home in Los Angeles, California. Hachimura is third on the team, behind Beal and Bertans, in points per game and minutes per game. Before the season shut down, Hachimura was averaging 13.4ppg and 6.0rpg. Look for both of those numbers to drastically rise once bubble play begins.

Many people recognize Alex Caruso because of the social media star he has become. Lebron James even goes so far to call him “GOAT” whenever he sees him. While he might not be on the “GOAT” level, he still has been an important piece on this Los Angeles Lakers team. Now with guys like Avery Bradley sitting out of the NBA restart and Rajon Rondo fracturing his thumb, Caruso’s role has just intensified.

With Rondo now on the shelf, Caruso is the obvious choice to handle more of the ball-handling duties, and it could be a blessing in disguise for a couple of reasons.

Lebron and Caruso have created a chemistry on the court that had Lebron commenting on the connection after a game against Memphis back in February. Lebron said, “Very cerebral basketball players. We are making winning plays, both of us. We work well together, and every minute we are on the floor, we are just trying to make it productive, trying to be in the plus and not the minus. It’s a great combination for our ball club.” 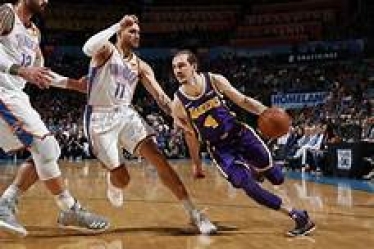 Along with having that chemistry with LeBron, Caruso brings more to the table in comparison to Rondo. He is a better shooter from the floor, beyond the arc, and the free-throw line. He’s younger with a lot more to prove as a player that hasn’t inked his first lucrative long-term deal yet, and he’s nowhere near as injury-prone as the former Celtics star.

His stats might not be amazing, but he has been much more efficient than Quinn Cook when he gets minutes. He is most suited for running the Lakers’ second unit, as he has the best playmaking ability among reserve guards and has sturdy team defense. Recent pickups like J.R. Smith and Dion Waiters might look good on paper, but Caruso can be a less popular value play with a higher floor than both those options.

The Brooklyn Nets have been hit hard with injuries and COVID-19 this year, especially at the point. All-Star point guard Kyrie Irving has dealt with multiple injuries this year including shoulder impingement, hamstring strain, and a season-ending knee sprain. Due to these injuries to Irving, it allowed Spencer Dinwiddie to step up and set career-highs in points, rebounds, and assists this season. Dinwiddie contracted COVID-19 and has already decided to sit out for the rest of the year. 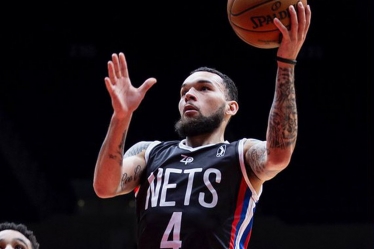 This sets the stage for Chiozza fever to take over. Before the season was halted due to this pandemic, Chiozza started to get extra minutes off the bench for the Nets. Over the last five games, before the league shut down, he averaged 10 points, 3.2 rebounds, 2.6 assists, and two 3-pointers made per contest. Coach Jacque Vaughn has started running practices as the Nets prepare for the restart of the season and Chiozza has been running with the first team. Coach Vaughn has not officially confirmed that Chiozza will be the starter, but he has all but sewn up the starting gig. Newly signed Tyler Johnson and Jamal Crawford were both acquired to provide depth to an injure plagued backcourt for the Nets and neither one will be a threat to Chiozza’s playing time.

With Chiozza pretty much locked-in as the new starting point guard for the Nets, he should be a must-start for DFS players. He will be a great value and be a bargain and allow fantasy players to load up on a couple of top super-star level players.