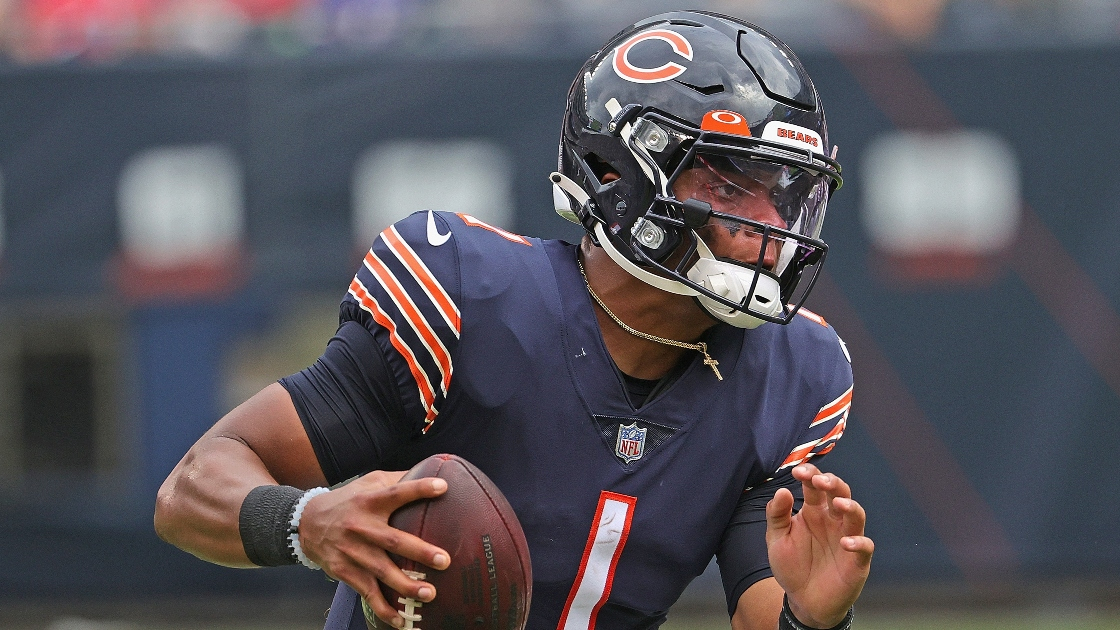 With Thanksgiving approaching, I wanted to take this time to give thanks to the lord above for the family and friends that I have, and my health because without that nothing would be possible.

Now as we’re inching closer to the playoffs hopefully we can be thankful for adding a gem or two off the waiver wire before our league mates do, so we can make it to the promised land. Here are this week’s Preemptive Strike players, happy hunting.

The pick-up of the week at the quarterback position in Preemptive Strike is Justin Fields. Although he has a tough match-up this week versus Baltimore, Fields gets to feast on the Lions on Thanksgiving in Week 12. Over his last two outings before the bye Fields has averaged 29.05 fantasy points per game. Since he has already had his bye Fields is primed to have a stellar second half of the season and should be added in all league formats.

Highest yards per rush, since Week 6:

He's baaaaaaaack! The return of Cam Newton to Carolina was an ultimate success. What did Mr. Newton do in his return you ask?  Well, all he did is score two touchdowns without even breaking a sweat. Coach Matt Ruhle already stated that Newton will take the first snap under center this Sunday making him an excellent addition to fantasy rosters before next week’s waiver wire rush.

CAM NEWTON IS BACK.

Trey Lance who? Jimmy Garoppolo has been balling over the last three weeks. Although this week he faces a Jaguars defense that has been shutting offenses down lately including the Bills a couple of weeks ago, Garoppalo has the weapons to make things happen on offense. Deebo Samuel has been playing like an All-Pro this season, and with the return of George Kittle from injured reserve, and Brandon Aiyuk finally out of the dog house, the 49ers offense is running on all cylinders. Looking ahead he has an awesome schedule come fantasy playoff time so add him now while you still can.

WILSOOOOOOON!!!! Jeff Wilson and Elijah Mitchell were running all over the Rams defensive line in Week 10. With news breaking that Mitchell had to have surgery on his finger making him doubtful this week, Wilson is a must-add priority this week. If Mitchell’s injury lingers past this week you are looking at a low-end RB1 to high-end RB2 for free. Add him now.

Latavius Murray has been on the injured reserve for a few weeks now, but there are signs that he is about to return back to the lineup. Obviously, the return to practice is a huge indication that he’s close to returning but the news that the Ravens waived LeVeon Bell is an even greater sign he will be back this week. Murray should be added in 10-team leagues.

Even though Michael Carter is the starter for the Jets, Ty Johnson has made his presence felt in the receiving game. Over three of his last four games, Johnson has brought in five receptions making him a running back to add in PPR formats.

Now for deeper leagues/dynasty leagues, Matt Brieda is a name to contemplate adding if you have the extra roster space. When given the chance like last week he can produce especially if the team has a good offensive line. While getting extra playing time last week, Brieda scored two touchdowns for the Bills. If any of the backs ahead of him were to be out an extended amount of time due to injury Brieda could be a possible league winner down the stretch.

Oh, why can’t Sterling Shepard stay healthy for the Giants? When he is in the lineup he is clearly Daniel Jones’s favorite target on offense. Shepard returned to practice on Friday and if he happens to still be available in your waiver wire snatch him up now while you still can. Must add in all league formats. Monitor his status leading up to Monday Night's contest with the Buccaneers.

Donovan Peoples-Jones has shown some flashes earlier in the season and now with Odell Beckham Jr. gone he has an opportunity to make an impact on offense. People-Jones is dealing with a groin injury so monitor his situation heading into Week 11. If he does play he may be helpful for fantasy managers that are dealing with players that are either on a bye or injured.

Can Bryan Edwards continue to be productive for the Raiders, that is the question? Last week he was able to turn four targets into three receptions for 88 yards and a touchdown. Someone has to catch balls on offense for the Raiders. Darren Waller will continue to garner the attention of opposing defenses making Edwards a wide receiver to add in 12-team leagues.

With Julio Jones on injured, Marcus Johnson stepped up and caught five receptions for 100 yards on six targets. Oh yeah and he faces the Texans this week.

Jamal Agnew has been one of the bright spots for the Jaguars this season. He has averaged 16.4 PPR fantasy points over his last five games.

If you want to talk about under the radar look no further than DeAndre Carter. Over his last six games, he has averaged 13.6 fantasy points in PPR leagues and he is only 2% rostered in Yahoo leagues. Wowsers!

Now we’re going deep with this one. With Amari Cooper out with COVID this week and possibly for the Cowboys Thanksgiving game, Cedrick Wilson may be a name to consider. In the past when there have been injuries to the Cowboys receiving core Wilson has stepped up and made plays.

Now for you scuba divers out there, Josh Reynolds is a player to stash in dynasty leagues. Reynolds has flashed in the past with the Rams and just got picked up off waivers by the Lions. There have been rumors that the Rams tried to pick up Reynolds before signing Odell Beckham, so they know that he has talent. There is no one lighting the world on fire for the Lions so Reynolds should have an opportunity to make some plays once he gets acclimated with the offense.

Dan Arnold seems to be a regular in this column. This may be the last chance you have of adding one of Trevor Lawrence’s favorite targets. Over his last three games, Arnold has averaged eight targets per contest and doesn’t appear to be slowing down anytime soon. Arnold is a must-add in all league formats.

How much Dan Arnold am I going to be playing this weekend? pic.twitter.com/qhzLtXsYdZ

Cole Kmet may be about to break out for the Bears and you may want to get on board before it is too late. Over his last three games, Kmet has averaged 6.7 targets per game and in his last game before the bye, he compiled six receptions and 87 yards off of eight targets. If you miss out on adding Arnold, focus on adding Kmet if you are in need of tight end help. Remember he plays the Lions in Week 12.

Tyler Conklin has filled in quite admirably for Irv Smith Jr. this year. Conklin has been a pleasant surprise and been very helpful for tight end needy teams this season. With Justin Jefferson and Adam Thielen getting most of the action and opposing defense’s attention, Conklin has made the most of the targets he receives. Conklin should be considered adding in 12-team leagues.

Are my eyes deceiving me? Has Evan Engram been one of the healthiest receiving options for Daniel Jones all year long? After missing his first two games of the season Engram has played the rest of the way for the Giants. Engram has always had the talent but his health and lack of targets have held him back from breaking out. The veteran tight end is another option to add in 12-team leagues.

Chicago Defense 17% rostered: As mentioned above, the Bears will get to feast on the Lions on Thanksgiving next week.

Houston Defense 1% rostered: If you are really desperate the Texans play the Jets in Week 12.

If you would like to further discuss this or have any fantasy questions you can reach me on Twitter at @smooth1074.

I wish everyone a Happy Thanksgiving and enjoy the time with your loved ones. Good luck everyone and see you next week.