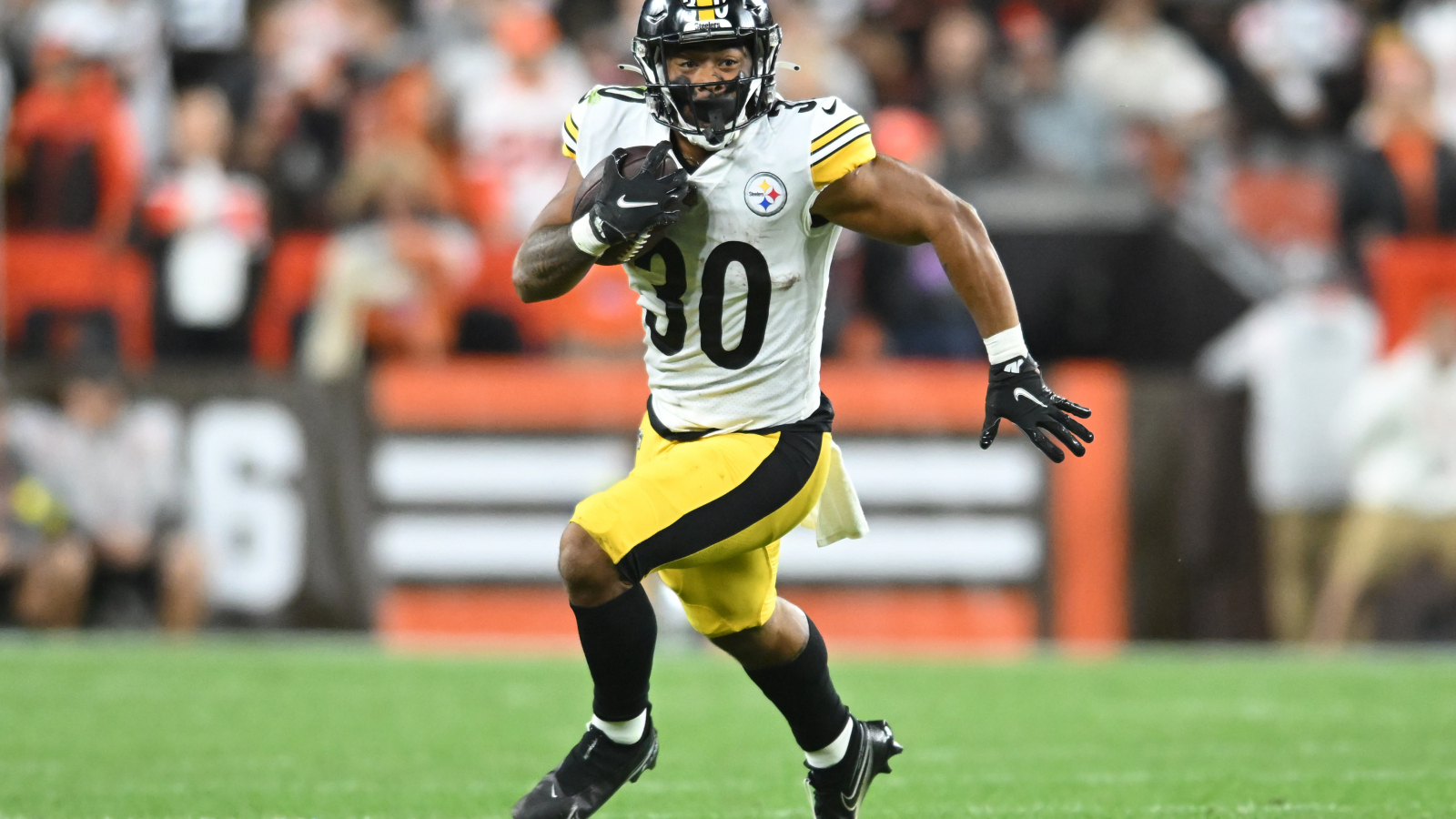 Week 10 was another brutal week of injuries, some fantasy teams may be left scrambling for answers after losing Copper Kupp, or tight end studs Dallas Goedert and Zach Ertz. Don't worry I got you covered. Hopefully, I can provide some answers to weather the storm until Kupp and Goedert return. As we continue to position ourselves for a playoff run, we still have byes to get through. This week there are four teams on bye (Jaguars, Dolphins, Seahawks, and Buccaneers). Like always the "Preemptive Strike" player list will focus on giving you some players to add or stash while providing some bye-week options depending on your league size and needs. It's time to open up a nice cold adult beverage relax and let's see what players you can add this week before your league mates try to add them next week.

As I’ve mentioned over the last couple of weeks Deshaun Watson is set to return for Week 14. If you’re in need of a quarterback who can possibly be a difference-maker in the fantasy playoffs you may want to consider adding Watson now because if he is not already on someone else’s team he will be after this week.

In a surprise move last week, new head coach Jeff Saturday shocked the football world and decided to start Matt Ryan for the Colts once again. Most experts were assuming that the Colts were throwing in the towel to get a higher draft pick for next year’s NFL Draft in April, but Saturday had other plans. Ryan came in and had a productive game and scored 24 fantasy points while leading the Colts to victory. This week don’t expect the same as he is sure to get demolished by a pissed-off Eagles team who are looking for blood after suffering their first loss of the season last week on Monday Night Football. But in Week 12, Ryan will have a chance to score 20-plus fantasy points for fantasy managers as he will be needed to sling the ball around to try and keep up with Patrick Mahomes and the Chiefs offense. Kansas City does allow the fourth-most fantasy points to quarterbacks, making Ryan a viable streaming option next week.

They tried to blame it all on him. pic.twitter.com/KhAJKuNIHS

Looks like the emotional head coach Ron Rivera has decided to roll with Taylor Heinicke for the rest of the season. Until now Rivera had yet to decide who would start for the Commanders once Carson Wentz returned from his injury. The recommendation to add Heinicke is more for 2-quarterback or super-flex leagues. In my opinion, I think the team gets more fired when Heinicke is behind center, and agree with coach Rivera on this one.

The #Commanders plan to start QB Taylor Heinicke moving forward, his job until performance necessitates a change. With wins in 3 of the last 4 games, he has earned it.

If Jaylen Warren would only get more touches per game, what would his ceiling be? Although Najee Harris is the starter for the Steelers, it appears that coach Mike Tomlin is trying to get Warren more involved in the offense. Over the last two contests, Warren has produced just over 10 PPR fantasy points, as he has been involved in both aspects of the game. In his last two games, Warren has rushed 15 times for 87 yards and has caught all six of his passes for 65 yards. I would consider adding him in all 10-team league formats. If Harris should go down with an injury watch out.

Alexander Mattison is Dalvin Cook's insurance policy. At this point of the season, you want to add any lottery tickets available. Mattison has proven that he is a very reliable running back whenever Cook has missed time due to injury and that he can be a bell cow. Mattison is worth stashing in all league formats.

In his first game action as a professional, Kyren Williams received 26% of the snap share for the Rams. What makes Williams an add for me is that the majority of his 6.90 fantasy points from last week came in the receiving game. He caught all three of his targets and he turn those receptions into 30 yards. With Cooper Kupp heading to IR with an ankle injury, the Rams will be looking for anyone to make plays for them as they will be fighting for a playoff spot. Next week the Rams will face the Chiefs who will surely pull out ahead. This will thrust Williams into more opportunities in the receiving game. Also, the Chiefs allow the seventh-most fantasy points to running backs making in 2022, making Williams a must-add in 12-team leagues.

All of Kyren Williams snaps from yesterdays game pic.twitter.com/dizEyzQ2Ct

One thing that can be said of the Chiefs' running back by committee, is that Jerrick McKinnon is their receiving back specialist. McKinnon is averaging eight targets over his last two games, giving him a chance to be a great flex play in deeper leagues during heavy bye weeks. He should be hovering just over double-digits PPR fantasy points going forward.

If Darius Slayton is available in your waiver wire, I would consider him the most important player on this list to add this week. Slayton has come back from obscurity and has become the WR1 for the Giants. He has risen above Wan’Dale Robinson on the totem pole and is showing why he could be a force like he was in the early part of his career. In his first couple of seasons with the Giants, Slayton showed great chemistry with Daniel Jones. Over his last three games, Slayton has compiled 11 receptions for 219 yards and two touchdowns. The wide receiver's roster percentage has risen about 42% over the last few days, which means the fantasy community is coming around to the fact that Slayton can be an asset moving forward. Slayton is a must-add in all league formats.

What a play by #Giants WR Darius Slayton. Holy! pic.twitter.com/GHyP1El7XK

Although Michael Gallup continues to be the third option in the receiving game for the Cowboys, he is at least averaging over six targets per contest. Gallup is a good reserve player to have on your bench as he could be used as a WR4 or be a flex play in 12-team leagues. If should CeeDee Lamb or Dalton Shultz suffer an injury Gallup would have a chance at WR2 numbers with Dak Prescott back behind center.

13 targets his last 2 games. 2nd time in 6 appearances hitting 7 targets. Getting further away from that ACL injury

Historical DAL role. Should operate as their WR2. MIN gives up the 3rd most fantasy PPG to WRs so its a good matchup

Donovan People-Jones has been pretty consistent over his last seven games. During that span, People-Jones has averaged almost 12 fantasy points per game making him a good option as a WR4/flex in 12-team leagues.

Well look what happens when you put Matt Ryan back into the starting line-up again, Parris Campbell becomes relevant again. Campbell turned nine targets into seven receptions, 76 yards, and a touchdown. Now, this week he will have a tough match-up against the Eagles, but in Week 12, he will face the Steelers who are allowing the second-most fantasy points to wide receivers this year.

Two weeks ago in his season debut, Van Jefferson came up empty in the five targets he received. Now last week, Jefferson turned things around and caught all three of his targets for 27 yards and a touchdown. That isn’t a huge performance, but it shows the progress that Jefferson is making as he is being integrated back into the offense from his injury. What makes Jefferson a must-add priority is the fact that target monster Kupp is indeed on IR. We all know there will be a plethora of targets available. With Matthew Stafford set to return from his concussion this week, Jefferson and Allen Robinson should get plenty of opportunity to make plays going forward until Kupp returns from his ankle injury. If you need any other incentive to add Jefferson, in Week 12 he faces the Chiefs who allow the fifth-most fantasy points to wide receivers.

Since Darren Waller is on IR, Foster Moreau will be the starting tight end until Waller returns. Next week Moreau goes up against the Seahawks, who have been allowing the second-most fantasy points to tight ends this Fall. Moreau will be a nice streaming option if needed, and worth adding in 12-team leagues.

News from Ravens camp is that Mark Andrews is slated to return to the starting line-up this week. This news brings Isaiah Likely’s value down a bit. With that said, I would still consider adding Likely, because the Ravens are hurting at receiving options and I could see the Ravens having more offensive sets with both Andrews and Likely on the field at the same time. Likely is worth adding for tight end needy teams in 12-team leagues and must-add in tight end premium leagues.

With the news that Zach Ertz is out for the season, rookie Tre McBride is worth an add as more of a stash in deeper leagues. He has not shown much this year but is worth a flier to see if he gets any additional targets moving forward.

If you are looking ahead and want a playmaking tight end for the playoffs, add Daniel Bellinger now and stash him on IR. Bellinger was making plays on a consistent basis for the Giants prior to his eye socket injury. He has already resumed catching passes and may return next week.

Daniel Bellinger catches from the first half of the season pic.twitter.com/Rxassu2oh5

Defenses to Stream for Week 12

Denver Broncos Defense 60% Rostered travel to Carolina to tangle with the Panthers. If Mayfield is the quarterback, this could lead to some extra turnover opportunities for the Broncos' secondary.