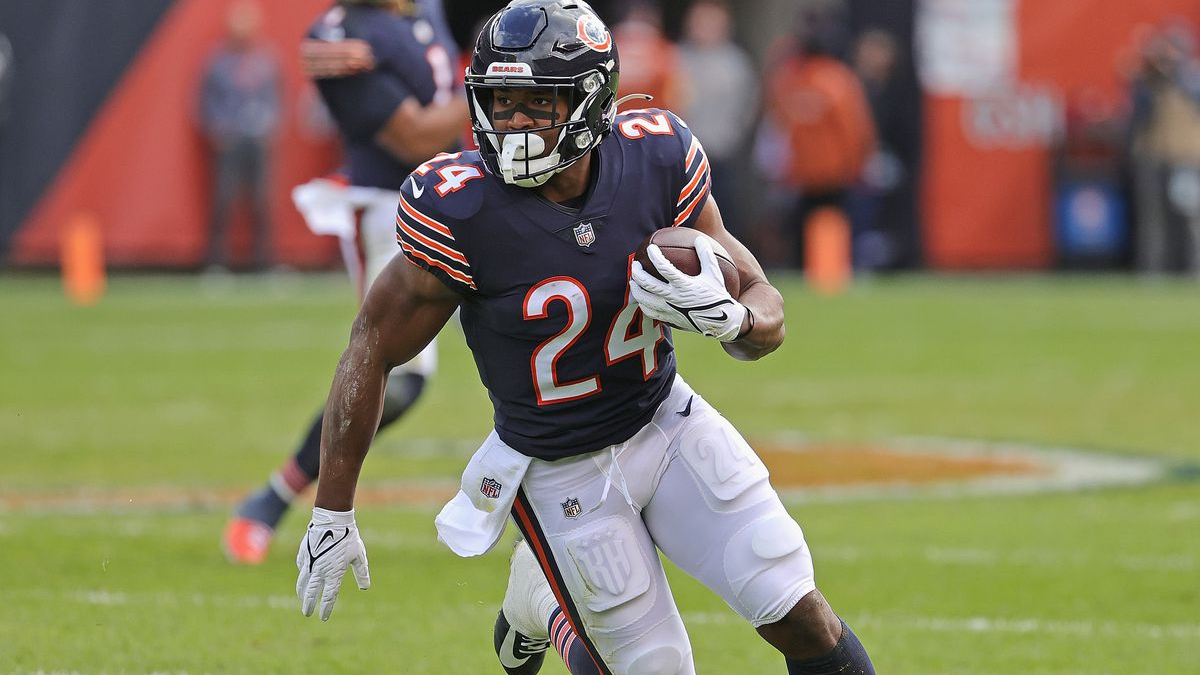 Welcome back to Preemptive Strike Week 2. The injury totals are starting to grow. I hope that you added Jeff Wilson last week before Week 1 because that means Wilson was already on your team before your league mates even had the chance to add him off the waiver wire. Let’s see if we can find any more fantasy treasures before the rest of your league does. Here are this week’s preemptive strike players.

How the tables have turned after one week. Carson Wentz was getting no love during the draft season due to his previous years of inadequacy and injuries. All he did in Week 1 was throw for 313 yards, four touchdowns, and two interceptions. This week Wentz faces the Lions and next week he goes up against his former team the Eagles, giving the Washington quarterback two favorable match-ups in a row.

Deep shots, aggressive outside the numbers and downfield pic.twitter.com/GeTqlFb7FP

If you lost Dak Prescott and looking for a possible replacement, Matt Ryan could help you weather the storm for a few weeks. Ryan’s Colts debut was a glimpse of how Matty Ice can still sling it. He threw for 352 yards, a touchdown, and an interception. Starting this week he has three consecutive games that he may be useful for Prescott owners, with games against the Jaguars, Chiefs, and Titans. Be sure to temper expectations this week with news that Michael Pittman will be out.

Now if you're living the quarterback streaming life and want to get ahead of next week’s waiver wire, Ryan Tannehill is definitely an option to consider. Tannehill has excellent receiving weapons and could be in a possible shootout next week with the Raiders who just gave up the fourth most fantasy points to quarterbacks in Week 1.

I can’t believe Khalil Herbert is still available in over 50% of Yahoo leagues. Herbert proved in Week 1 that the preseason reports that he will start getting more touches from David Montgomery. All Mr. Herbert did in the monsoon in the windy city was rush the ball nine times for 45 yards and a touchdown. He was more effective than Montgomery was with his 17 rushes for 26 yards. Next week the Bears face off against the Texans making it the right time to add Herbert now before it is too late.

The vision from Khalil Herbert. 👀

Brian Robinson is already doing drills and is a player you must add now to stash on your IR until he returns.

He’s already back on the practice field 🙌 @BrianR_4 pic.twitter.com/zDZ1s4OuGX

If you are looking ahead to next week, another running back that may be useful in 12-team leagues is Kenneth Gainwell. Miles Sanders has not been the pillar of great health and will split touches with Gainwell moving forward. Gainwell had a decent game with five rushes for 25 yards and a touchdown. The Commanders who just allowed James Robinson to have a productive return from his Achilles injury are coming up next week for the Eagles.

I mentioned picking up Rex Burkhead last week as there were reports that he was going to be more involved in the offense than rookie Dameon Pierce. Burkhead was involved in the rushing and receiving game and is a running back to consider adding if you have the space.

Rex Burkhead dominated snaps (71%) for the Texans despite playing with a lead.

Who knows how long he can do this, but that is RB1/RB2 utilization 😂🤣😂

We all know that Derrick Henry is the King, but when it comes to the receiving in the Titans backfield Dontrell Hilliard is a running you should consider adding. Last year when Henry was out Hilliard had a few useful games for fantasy managers. In Week 1 he illustrated that he still can be a productive player even with Henry healthy. Hilliard was targeted four times in the season opener and brought in three receptions for 61 yards and two touchdowns. Now the touchdowns won’t be happening every week, but the targets should be. Worth adding in 12-team leagues. Hilliard is out this week so you may be able to stash him on the IR for this week.

The Saints have a tough match-up this week with the Buccaneers, but I just want to mention picking up Mark Ingram, because Alvin Kamara hasn’t practiced at all this week due to a ribs injury and is currently being reported to be out for Week 2.

Saints’ RB Alvin Kamara is listed as questionable due to his rib injury for Sunday’s game vs. the Bucs.

Tyler Allgeier was a healthy scratch in Week 1. But with Damien Williams hitting the IR look for Allgeier to make his pro debut this week. The rookie running back could see his workload grow in the offense at a rapid pace going forward.

Rachaad White is more of a stash at this point and Leonard Fournette’s insurance policy, especially in PPR leagues.

Although Najee Harris has been cleared to play this week, he has been dealing with a foot injury all summer long. So consider adding Jaylen Warren now before Harris reinjures his foot.

With injury-prone Elijah Mitchell gone for numerous weeks, his replacement Jeff Wilson Jr. has had his own share of injuries making both Tyrion Davis-Price and Jordan Mason a priority to stash on your rosters. Davis-Price was a healthy scratch in Week 1, while  Mason was active, but that was more due to Mason being part of special teams. Try to add these runnings backs prior to Week 2 in deeper league formats.

When your league mates see Jaylen Warren and Tyrion Davis-Price already on your roster. pic.twitter.com/ZxZMbI8qlU

The Titans need to get their passing game going and that starts with getting Treylon Burks more targets. Burks was only targeted five times in Week 1, and he turned those targets into three receptions for 55 yards. That gives Burks 18.3 yards per reception. This week will be a difficult time for the Titans as they will be facing the tough Bills defense, but next week Burks and the Titans will have a favorable match-up with the Raiders. So if you want to be ahead of the waiver wire rush next week and have the space add the talented rookie while you can.

Treylon Burks led all rookie WR’s in yards after catch in week 1 with 33 👀 pic.twitter.com/yc00jcZCPQ

The resurgence of Wentz means that someone has to be catching his throws. Now, Terry McLaurin is Carson Wentz's number one and Curtis Samuel finally showed up in the box scores after being MIA last season. But Jahan Dotson is also a Commanders' wideout you should also want to add to your squads if he is still available. Dotson scored twice in his rookie debut and will have favorable match-ups for the next two weeks with games against the Lions and Eagles.

Speaking of resurgence, how about Robbie Anderson making a splash with Baker Mayfield behind center last week? Anderson was basically useless last season with no quarterback being able to get him involved in the receiving game. DJ Moore is the WR1 in this offense, but Anderson is the field stretcher and Mayfield isn’t afraid to throw the ball downfield. Anderson was targeted eight times and totaled five receptions for 102 yards and a touchdown. Look for more of that to come and you’ll want to add Anderson to your roster before someone else will.

Who will step up to be Aaron Rodgers’s WR1, Allen Lazard was out last week and is still questionable this week by only being limited in practice all week long. With Lazard possibly being unavailable again or limited, rookie Romeo Doubs has a chance to continue building some chemistry with Rodgers this week. Doubs caught four of his five targets in Week 1 and will hopefully get more action moving forward. Fellow rookie wideout Christian Watson is another player you may want to add in deeper leagues.

If Michael Gallup is on your waiver wire, he is still listed as out and he can be stashed on your IR spot until he returns to game action.

Trevor Lawrence started his ascension to being a usable fantasy quarterback with his new weapons Christian Kirk and Zay Jones. Kirk is already on someone else's roster but Jones is sure to be available on your waiver wire. If you’re in a deeper PPR league Jones is a must-add as he was targeted nine times and produced six receptions for 65 yards. This should be the norm for Jones on a weekly basis.

Well well well, look who returned to the Giants last week, Daniel Jones’s favorite weapon, Sterling Sheppard. Sheppard has always had great chemistry with Jones. The problem is Sheppard can’t stay healthy. With only being 6% rostered Sheppard should be available in most leagues and be a good replacement if you lost Michael Pittman this week or have a questionable Gabriel Davis on Monday Night Football.

Hotshot rookie Wan’Dale Robinson got injured in Week 1 and is out this week, so if you can add him and stash him on the IR do so and thank me later.

Now let us go deeper into the rabbit hole for this last wide receiver to add. With all the injuries and suspension that the Cardinals are dealing with, the door has opened for someone to produce in this offense. Now steps in Greg Dortch who made an impact in his debut by receiving nine targets and compiling seven receptions for 63 yards. Grab him now before the secret gets let out.

Irv Smith wasn’t targeted much in Week 1 but may have an opportunity in the next couple of weeks to be more involved in the offense. Justin Jefferson is the target hog in this offense, but as opposing defenses will try to stop him going forward, things should start opening up for the tight end. Smith is a tight end to add in 12-team leagues.

The Bengals have many offensive weapons, and Hayden Hurst is one of those weapons that can be useful in deeper leagues. Tee Higgins will possibly be back this week after possibly getting cleared from the concussion protocol but Hurst can still deliver in the RedZone. Be sure to add Hurst in 12-plus team leagues.

Beautiful toe tap from Hayden Hurst as the Bengals drive in OT! pic.twitter.com/wSLDHSzVIP

Now for those that are in even deeper leagues, you need to take a look at the Jets' starting tight end Tyler Conklin. The drumbeat for Conklin has been steadily pounding since training camp and getting louder by the day. Conklin received seven targets. Now the yardage total was nothing to write home about but he had four receptions and a touchdown. Pull the trigger and add him to your deep tight end premium leagues.

What players are you looking to add before this week's games? If you would like to discuss this further you can reach me on Twitter at @smooth1074.