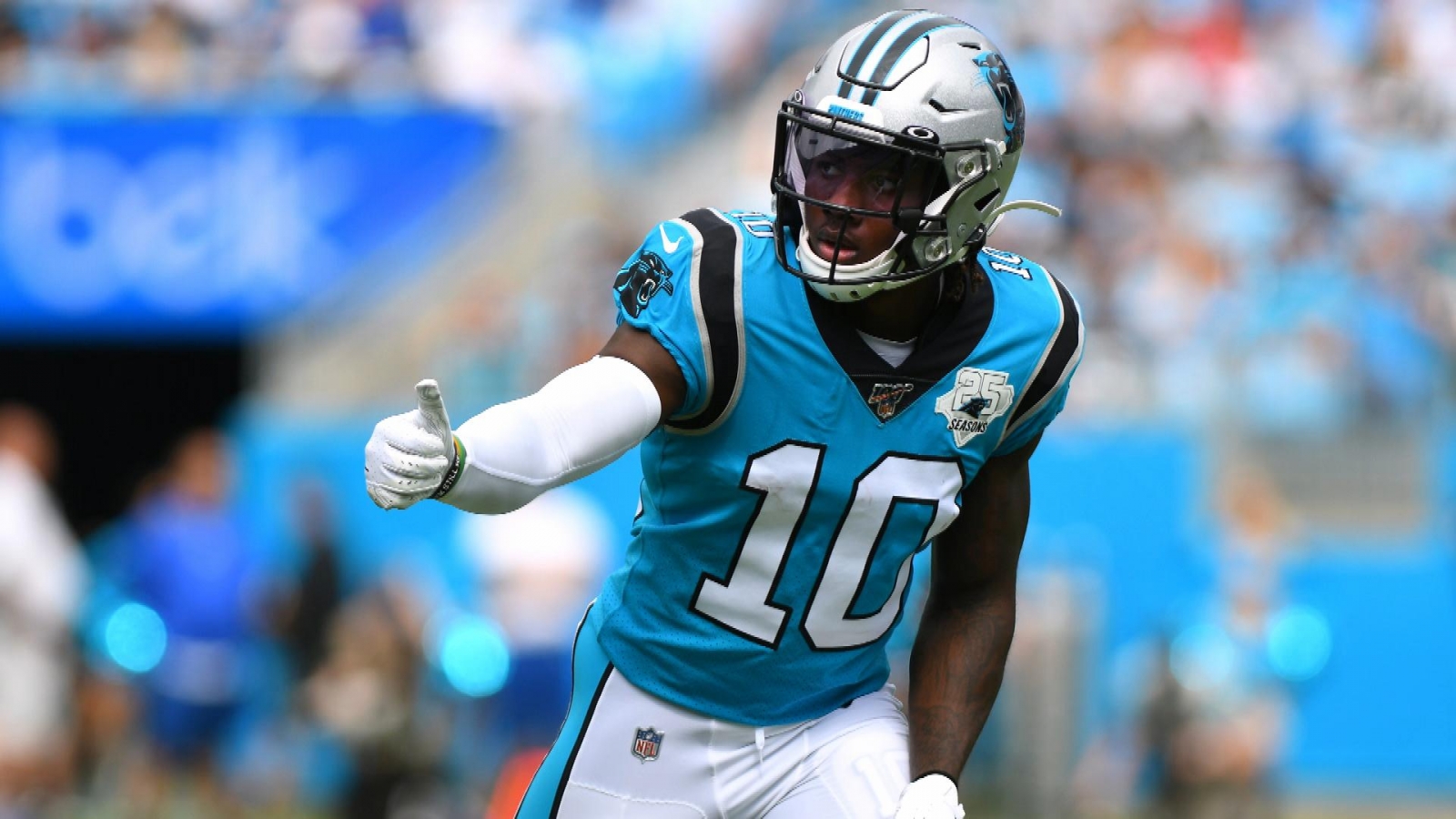 As the dust settles from Demolition Derby Week 2, oops I mean Week 2 of the NFL, there were several devastating injuries that might derail championships aspirations for many fantasy managers. With Saquon Barkley out for the year and Christian McCaffrey out for at least four games with a high ankle sprain, the top two overall picks in every fantasy draft are all of sudden going to make Sundays less fruitful for their fantasy managers. Hopefully, you were able to pick-up their replacements Devonta Freeman/Dion Lewis or Mike Davis respectively to soften the blow. If you came up empty with your waiver wire request this week hopefully, Preemptive Strike Week 3 will have some options for you to get back on track.

Daniel Jones, Giants 45% Owned - After a loss to Chicago on the road last week, Daniel Jones will be looking to get the passing game going as he did in Week 1. With Barkley out for the remainder of the season and the banged-up 49ers coming to town, Jones should have some time to get his receivers involved and some extra yards on the ground this week. Should be added in 12-team leagues. 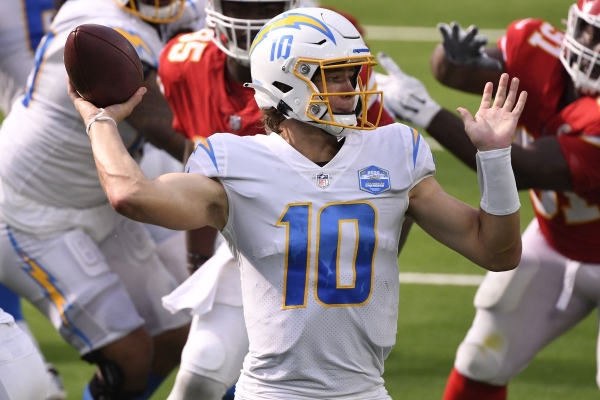 Justin Herbert, Chargers 20% Owned - The time is now! Rookie Justin Herbert was not to get a start in the first half of the season. Unfortunately, Tyrod Taylor suffered an injury that opened the door for Herbert to play last week versus the Chiefs and now is starting this week against the Panthers. If you're in the need of a streamer this week in deeper leagues, Herbert is your man. He's must-own in dynasty leagues.

Baker Mayfield, Browns 44% Owned - The Washinton Football Team(WFT) has a very strong front seven but where their vulnerable is in the secondary. Look for Baker Mayfield and Odell Beckham to exploit this hole in their defense early and often. Should be owned in 14-team leagues.

As we all just witnessed or experienced first hand your stud running backs can go down with a serious injury at any time. These top waiver wire running back options should be owned in 12-team leagues because if the starter gets injured they will in line for the majority of the carries. 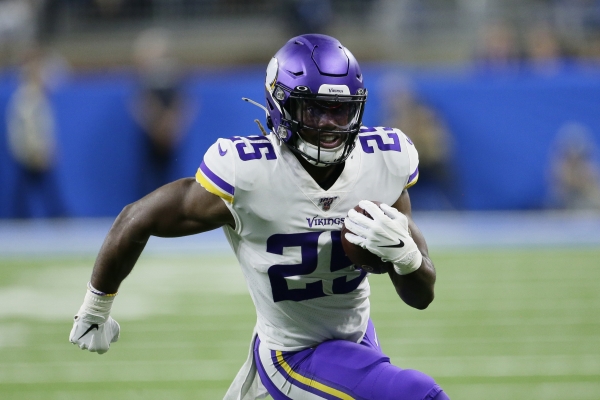 Alexander Mattison, Vikings 40% Owned -  Alexander Mattison is Dalvin Cook's main back-up and often gives him a breather. Cook has not been the pillar of great health throughout his career, missing time on several occasions due to injuries. Mattison does get some run from time to time in the Vikings offense. The Titans are susceptible to the run, so there might be a chance that he gets some extra touches this week as well. If you're the Cook owner in your league or even a league mate that has space on your roster, add him now to beat the waiver wire rush.

Chase Edmonds, Cardinals 37% Owned - Chase Edmonds is a hold or great pick-up in 12-team leagues. He has already proven in this early season that he has stand-alone value as he produced 12.60 fantasy points in Week 1 and nearly caught another touchdown in Week 2 but the ball was overthrown in the endzone. Kenyan Drake tends to miss time due to getting bit by the injury bug on occasions. Pull there trigger if he is there and be patient for as long as you can.

Tony Pollard, Cowboys 27% Owned - It's very understandable for Tony Pollard to be floating around in the waiver wire because he's playing behind the indestructible Ezekiel Elliot. But Pollard might be the back-up running back in the best situation. When Elliot missed four games due to suspension Pollard posted RB1 numbers. If you're in a 14-team league add Pollard because he might end up bringing you a championship come season end if Zeke happens to get hurt. 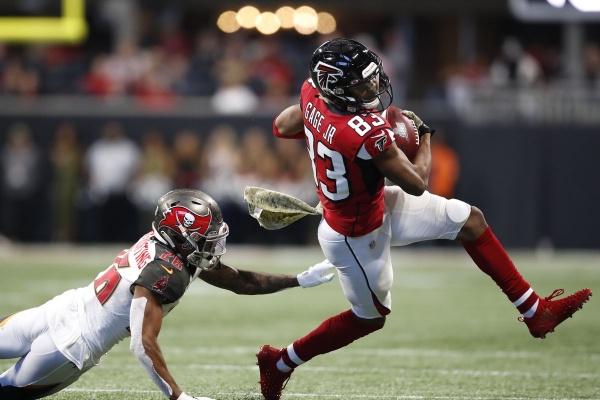 Russell Gage, Falcons 53% Owned - If your in need of a wide receiver option this week make sure Russell Gage isn't in your league's waiver wire. He has already proven that he will be used in the Falcons high flying offense this year by posting double-figure fantasy points both weeks this season. Furthermore, Julio Jones is nursing a hamstring injury this week and has not practiced all week, which would make Gage a possible WR3 this week. Gage should be owned in all leagues at this point.

Golden Tate, Giants 37% Owned - With the news of Sterling Shepard being placed on injured reserve due to a turf toe injury, Golden Tate must be owned in all leagues. The Giants might turn into a more passing offense going forward with the loss of Barkley for the season. Add Tate if he's available because he was targeted five times in his first game of the season in Week 2 and his target share will be on the rise moving forward.

Curtis Samuel, Panthers 25% Owned - With CMC out four to eight weeks with a high ankle sprain, everyone added Mike Davis off the waiver wire this week. But another player that should have been heavily added this week is Curtis Samuel. Samuel was used in multiple facets of the game in college as he lined up not only as a receiver but also at running back. Samuel has not been used as much as he was last season but Coach Matt Rhule has already come out and said that Samuel will be used more going forward. Therefore, add him now for free before you have to pay on waiver wire day. 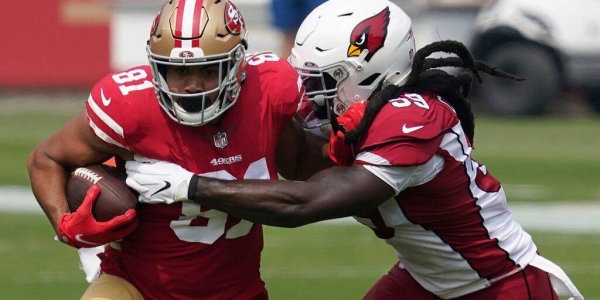 Jordan Reed, 49ers 18% Owned - Jordan Reed proved last week that he still has plenty of game left in the tank. Even though George Kittle practiced on a limited basis this week he has already been ruled out for Sunday, making Reed a great option for another week. After this week Deebo Samuel might start practicing again next week but Reed has proven that he can be productive at a high level and it would fun to see Kittle and Reed deployed at the same time the Niners offense.

Logan Thomas, Washington Football Team 32% Owned - Logan Thomas continues to be heavily targeted on a weekly basis by Dwayne Haskins. He has averaged 8.5 targets weekly. The production should start coming as long as the targets continue, which they should. Thomas may be added in 12 to 14 team leagues and is a streaming consideration.

Dalton Shultz, Cowboys 29% Owned - Once Blake Jarwin went down with a season-ending injury in Week 1, most fantasy managers went elsewhere searching for a replacement, but Schultz made his presence felt in a huge way in Week 2 catching nine of his 10 targets for 88 yards and a touchdown. Schultz is a must-own tight end going forward in all leagues.

Joshua Kelley, Chargers 65% Owners - Make sure he is not available in your waiver wire because he should be owned in all leagues.

Corey Davis, Titans 47% Owned - With A.J. Brown out another week with a knee bone bruise, Davis could be a WR3/Flex play this week for teams in need.

Allen Lazard and Marquez Valdes Scantling, Packers 46% and 41% Owned - With Davante Adams listed as doubtful for Sunday Night Football, both receivers should be targeted early often. Grab them while you can.

Benny Snell Jr., Steelers 33% Owned - He's another James Conner injury away from becoming relevant in an instant. Another lottery ticket own.

Damien Harris, Patriots 25% Owned - Harris was impressive during training camp and was heading towards a major role in the offense. He's due to come off IR soon and Sony Michel has been non-existent so far this year. Pick him up and place him on IR spot until he is ready to return.

Jeff Wilson Jr., 49ers 21% Owned - WILLLLLLLLLLSOOOOOOON! Wilson is rumored to get a starter's share of the running back load this week as he will split touches with Jerick McKinnon.

Michael Pittman Jr., Colts 18% Owned - With Parris Campbell out for several weeks with knee injury Pittman is sure to get some extra looks going forward.

Derek Carr, Raiders 18% Owned - Could be a streaming option for deep leagues as the Raiders travel to New England.

Drew Sample, Bengals 7% Owned - C.J. Uzomah is out for the year and if the seven targets that Sample received once Uzomah left the game in Week 2 is any indication of what's to come, add Sample now before next week's waiver wire rush.

Jack Doyle and Mo Olie-Cox, Colts 15% and 9% Owned - Doyle is set to return this week and Olie-Cox illustrated in Week 2 that he is not going anywhere and should be in consideration for continued targets in the RedZone.

Mitch Trubisky, Bears 9% Owned - Trubisky is an excellent streaming option this week as the Bears will face the Falcons who have given up the most fantasy points to quarterbacks this season.

KJ Hamler, Broncos 8% Owned - Hamler is an electric player that will be used in the slot and then some with Courtland Sutton out for the rest of the season. Add him if you have space on your rosters.

Van Jefferson Jr., Rams 4% Owned - Jefferson's targets will continue to rise as the season progresses, as he is the clear WR3 in this offense.

Darrynton Evans, Titans 3% Owned - The rookie is et to make his season debut and is Derrick Henry's back-up. Could be worth a speculative add in deeper leagues.

To further discuss or if you have any Start or Sit questions you may reach me on Twitter at @smooth1074.