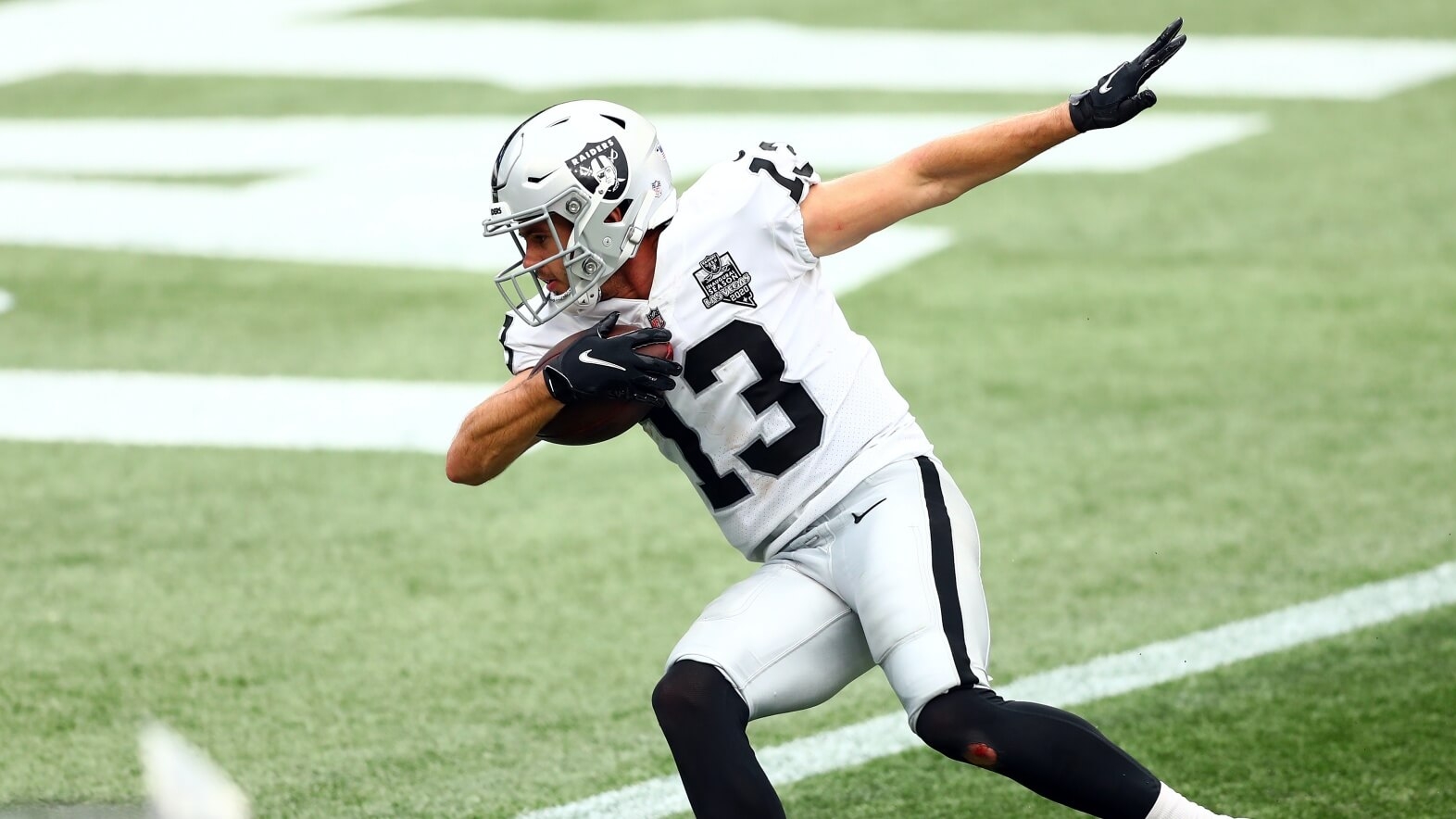 Well, it only took COVID-19 three weeks to start affecting the NFL and fantasy managers' line-ups. After last week's Titans/Vikings game, news broke that several Titans players and other personnel tested positive for COVID-19. Due to this occurrence, the NFL has postponed the Titans versus Steelers Week 4 match-up for later in the season, sending many fantasy managers scrambling to find replacements. Additionally, Cam Newton tested positive for COVID-19 on Saturday so Sunday's game has been postponed to either Monday or Tuesday for now. Keep monitoring the status of this game, because you may be without Patrick Mahomes and other Chiefs stars as well if the game is postponed for later in the season.

But never fear, Preemptive Strike is here to give you some replacement options this week and like always, trying to be one step ahead of your league mates. Here we go!

Here are some replacement options for Ben Roethlisberger, Ryan Tannehill, and Cam Newton, as well as Patrick Mahomes, should his game be postponed for later in the season:

Gardner Minshew, Jaguars 45% Owned - Even though Gardner Minshew did not have a memorable performance last week against the Dolphins, Minshew is sure to get back on track this week in a possible shootout with Joe Burrow and the Bengals. His number one option D.J. Chark returns to the Jaguars lineup after missing last week's contest due to a chest injury. His return will surely help the cause.

Baker Mayfield, Browns 42% Owned - Baker Mayfield has a juicy match-up this week as the Browns travel to Dallas to face the Cowboys who give up the third-highest fantasy points to quarterbacks. This game should be another high scoring affair this week and Mayfield is a great option for fantasy managers in a bind this week.

Ryan Fitzpatrick, Dolphins 20% Owned - If available, the quarterback on your waiver wire with the highest upside this week should be Ryan Fitzpatrick. Fitzpatrick just roasted the Jaguars last week and now faces the Seahawks who give up the most fantasy points to quarterbacks.

Here are some replacement options for Derick Henry and James Conner, as well as Clyde Edwards-Helaire should his game be postponed for later in the season:

Jeff Wilson, 49ers 40% Owned - With the 49ers being hammered by the injury bug early on in the season, Jeff Wilson helped fill in the void left by Raheem Mostert and Tevin Coleman quite admirably. With both runnings still out this week, Wilson should share the load with Jerrick McKinnon once again this week.

Joshua Kelley, Chargers 54% Owned - Last week Joshua Kelley was not needed as much as the Chargers were down most of the game and Austin Ekeler's number was called to help and try to bring the Chargers back in the receiving game. The Buccaneers have a tough and up incoming defense that may make it a little difficult for Kelley to get going but he is an option for those in need of running back help this week.

Brian Hill, Falcons 24% Owned - Last week Brian Hill was given nine carries and he provided 58 yards and a touchdown. Todd Gurley has not been All-World self again so far this season and by the looks of things Hill may be called upon to help out the running game this week versus the Packers.

Here are some replacement options for JuJu Smith-Shuster, Diontae Johnson, and A.J. Brown, as well as Tyreek Hill and Julian Edelman should their game be postponed for later in the season:

Russell Gage, Falcons 50% Owned - Russell Gage left last week Falcons' game early due to a concussion but was cleared from the concussion protocol on Saturday. With Julio Jones and Calvin Ridley, both listed as questionable this week, Gage could be in line for a huge target share this week if one or both receivers miss the game.

Hunter Renfrow, Raiders 40% Owned - Another team that has been ravaged by injuries to it's receiving core is the Raiders. With Henry Ruggs currently listed as doubtful and Bryan Edwards listed as out, Hunter Renfrow will be thrust into the limelight this week. Last week he already received nine targets and that number is sure to rise with both receivers out this week.

Preston Williams, Dolphins 34 % Owned - As mentioned above the Dolphins will be involved in a shootout at home with the Seahawks coming to town. The Seahawks also give up the most fantasy points to wide receivers, so look for Preston Williams to have a breakout game this week. All-pro safety Jamal Adams is out for the game so this will only make things easier for Williams and DeVante Parker to get open early and often.

Here are some possible replacement options for Jonnu Smith and Eric Ebron, as well as Travis Kelce should his game be postponed for later in the season:

Dalton Schultz, Cowboys 49% Owned - Coming off an average performance last week, look for Dalton Schultz to get back on track this week as he will face off against the Browns who give up the fourth-most points to tight ends. With all the wide receiving options that Dak Prescott has, look for the Browns defense to focus on stopping them, leaving Schultz to get open for plenty of targets.

Mo Alie-Cox, Colts 32% Owned -  If last week was any indication of what the hierarchy of the tight ends position for the Colts moving forward, Mo Alie-Cox may be the new number one tight end in the offense. Last week when Jack Doyle returned from injury he was not targeted at all, and Alie-Cox caught all three of his targets for 50 yards and a touchdown. If fantasy managers are in a bind this week at the tight end position Alie-Cox may be a great option for you this week.

Logan Thomas, Washington Football Team 26% Owned -  Logan Thomas has averaged eight targets a game for the young season so far. The Ravens are susceptible to being beaten by the tight end position as they allow the fifth-most fantasy points to tight ends this year. For deeper leagues, Thomas might be an option for you.

Marquez Valdes-Scantling, Packers 59% Owned - Make sure MVS is not floating around in your waiver wire as he is in line for a target boost with Allen Lazard on IR.

Golden Tate, Giants 35% Owned - With Sterling Shepard on IR, Tate will continue to be targeted.

Daniel Jones, Giants 35% Owned - May have to play catch-up this week to keep up with the Rams.

Tee Higgins, Bengals 32% Owned - Higgins should continue to blossom in this offense and the game could be a shootout.

Laviska Shenault, Jaguars 24% Owned - If you have space on your fantasy roster add him if you can.

Curtis Samuel, Panthers 22% Owned - Should continue to see increased touches while CMC is out.

Giovani Bernard, Bengals 19% Owned - May get some extra touches this week with Joe Mixon questionable this week.

Robert Tonyan, Packers 18% Owned - Facing the Falcons who give up the second-most fantasy points tight ends.

AJ Dillon, Packers 7% Owned - Was mentioned as someone who is likely to receive more touches going forward.

Ke'Shawn Vaughn, Buccaneers 6% Owned - Should be active this week with Leonard Fouornette out this week.

Adam Trautman, Saints 0% Owned - Will start for the Saints at tight end with Jared Cook out this week.