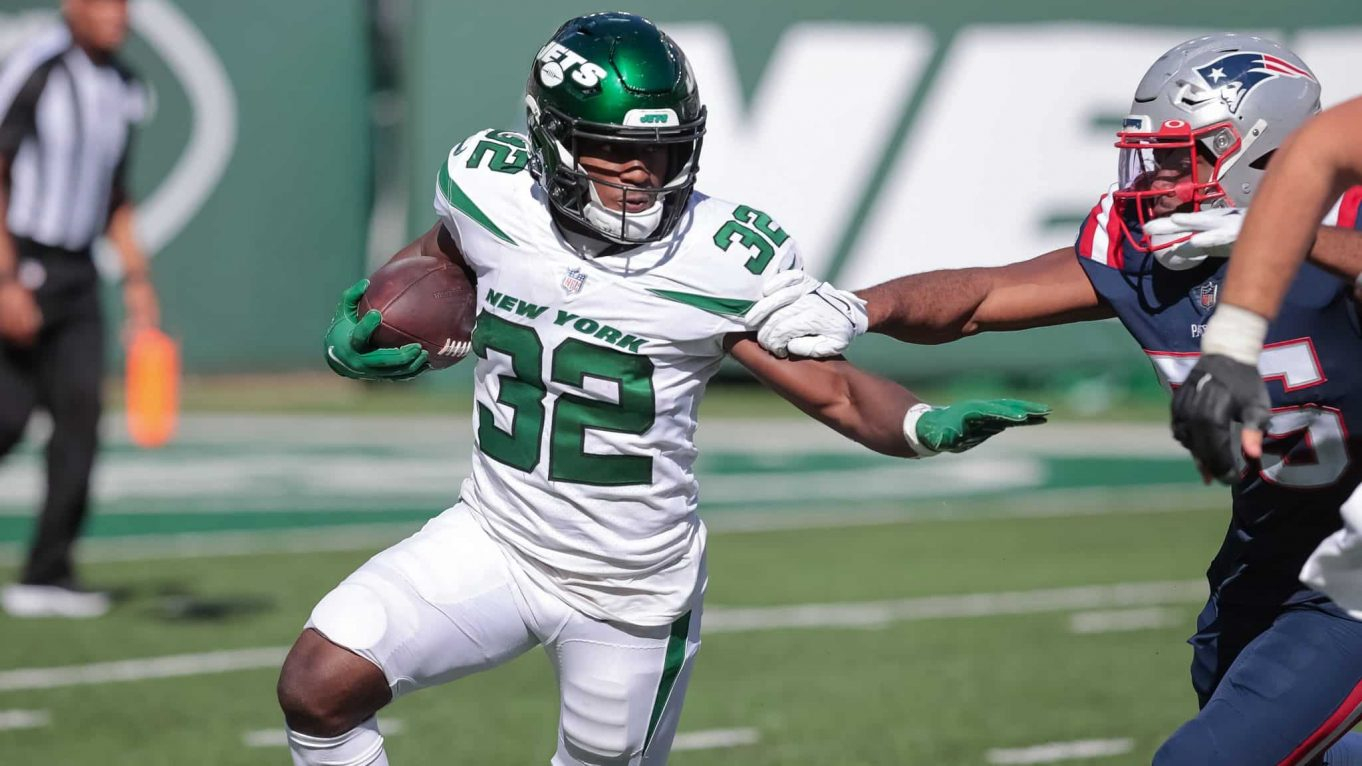 If you're looking to be one step of your fantasy football league mates you have come to the right place. On Preemptive Strike, I will attempt to give you several players to add before this week's games so that you can be ahead of the waiver wire rush for the week ahead. The players listed will be players that are rostered around the 50% range and under. So hopefully there's a chance that they could still be there in your waiver wire pool. Now onward to the players to add before Week 4's games begin.

If you are a fantasy manager that loves living that quarterback-streaming life, Matt Ryan is the quarterback to add now. Not only does he play against the surprisingly porous Washington Football Team defense this week but next week they have another juicy match-up against the Jets. Check to see if Ryan happens to be available on your waiver wire since he will be useful in 12-team to 14-team leagues for the next two weeks before the Falcons have a bye in Week 6.

If you’re looking to add a quarterback in a 12-team league that will have several favorable upcoming match-ups, Jameis Winston is a name to consider adding to your rosters. Winston will have a bye in Week 6, but that bye week will be sandwiched between a total of six games versus opponents that are in the Top-20 in fantasy points allowed to quarterbacks this season.

The Jameis Winston experience in one video.pic.twitter.com/mhz1tFFld1

Another good streaming option for next week will be Daniel Jones. This week he will have a tough contest against a rising Saints defense, but next week Jones will see the Cowboys team that’s allowing the ninth most fantasy points to the quarterback's so far this season.

Other quarterbacks to consider adding for next week are: Jared Goff (14% rostered) who faces the Vikings and Mac Jones (17% rostered) who will battle the Texans in Week 5 respectively.

If Week 3 was any indication of what’s to come, the top priority player to add before Week 4 is Michael Carter.  He is the stop what you are doing and go pick-up the player for the week. Carter out-touched Ty Johnson by an 11-to-4 margin. With the Jets down early by over two touchdowns, the Jets totally abandoned the run, therefore making the running back not useful. If the Jets can keep it close it should allow Carter to make more of an impact moving forward. Carter should be rostered in all 12-team league formats.

This add is solely based on the availability of Josh Jacobs this week. Monitor Jacobs’s status heading into Monday Night Football. Coach John Gruden proved last week that if Jacobs can’t go, Barber will be the lead back for the Raiders. Barber rushed 23 times for 111 yards and a touchdown while also garnering five targets. With Jacobs already missing time due to an ankle injury Barber is definitely one to add in 12-team league formats.

Insurance policy for Miles Sanders and must be rostered in all 12-team and 14-team leagues.

A speculative add due to the recent trade rumors swirling around him. Mack could land in a favorable spot, on a team that is struggling at the running back position.

Insurance policy for Clyde Edwards Helaire, who has steadily seen his touches increase as the season progresses. An excellent in 12-team and 14-leagues team leagues.

With James White out for the rest of the year, look for Rhamondre Stevenson to finally get an opportunity to produce for the Patriots. Running Backs coach Ivan Fears has already stated that Stevenson has demonstrated improvement in practice and that the running back will get a chance to replace some of White’s production. I would add Stevenson in all 12-team league formats.

Ivan Fears on Rhamondre Stevenson: "I think he's going to be great in his next appearance. I really do."

Said Stevenson had some trouble making the adjustment from college to the pros, but that he's happy with the way the rookie has responded since his rough debut.

Three names that are priority adds for all league formats at wide receivers if they happen to be swimming around in your waiver wire pools are: Rondale Moore (57% rostered), Henry Ruggs (55% rostered), and Mecole Hardman (50% rostered)

All Tim Patrick has done this season is score double-digit fantasy points every single week in PPR league formats. With Jerry Jeudy still weeks away from returning from injured reserve (IR), Patrick should be owned in all 12-team league formats.

Only players with a perfect 158.3 passer rating when targeted

This may your only chance to add Curtis Samuel to your rosters if he happens to still be available on your waiver wire. Samuel was activated from the IR this week when he was first available to, so look for Samuel to be implemented in the offense sooner rather than later.

Hotshot rookie Rashod Bateman is nearing a return from the stint on IR due to a core muscle surgery he had during training camp. If you have an IR spot available add him now because he will remain out for Week 4 but is more likely to return for Week 5 against the Colts on Monday Night Football.

There has been an awakening in the force. The most hyped player in the pre-season Marquez Callaway finally had a productive game this regular season for the Saints. Callaway brought in four of his five targets for 41 yards and a touchdown. Hopefully, this is a sign of things to come and he can be productive in the next two games before the bye with match-ups against the Giants and Washington. Add the wide receiver if you can.

Another must-add in PPR league formats before this week's contest is Hunter Renfrow. The wide receiver has averaged 14.7 PPR fantasy points so far this season making him an excellent flex play moving forward. He has a tough match-up this week against the Chargers but for next week he will face the Bears who are allowing the eighth-most fantasy points to wide receivers this season.

It's a trap! Or is it? As all of us know Josh Gordon has not been a consistent fantasy football contributor since 2013. Through all of his off-field troubles, he has shown flashes of his talent here and there, so we know we should just say no? But when you hear that Gordon signed with offensive power Chiefs and then rumors circulating that he has impressed so much so that may be active for Week 5 you just hypnotized and want to add him one more time. So if you have a spot at the end of your roster and want to roll the dice one more time hopefully, this around we get lucky number seven come out instead of snake eyes. I'll be a sucker one more time if I have that extra roster spot and add Gordon and see what happens. YOLO!

New #Chiefs receiver Josh Gordon has impressed already, so much so that he could be activated next week. My story: https://t.co/Yl8U9xQ5h9

With all the injuries that the Giants have suffered at the wide receiver position, look for Evan Engram to see an increase in looks and targets for the foreseeable future. He has a tough match-up this week against the Saints, but in the two following weeks, Engram will face a couple of teams that allow the second and ninth-most fantasy points to tight ends in the NFL so far this season.

In two of the three games so far this year Dalton Schultz has brought in six receptions, including last week’s performance that included 80 yards receiving and two touchdowns. If you are in need of tight end help in 12-team and 14-league league formats Schultz may be the player you are looking for.

In Week 3 Zach Ertz had by far his best game of the season. The former All-Pro tight end produced four receptions, 53 yards, and a touchdown on seven targets. The only thing that is preventing Zach Ertz from being a TE1 for fantasy managers is Dallas Goedert. For now, Ertz is a solid TE2 and should be rostered in 12-team and 14-team league teams.

Here are some team defenses that have favorable match-ups at Week 5 that could be added if you have the space.

Patriots Defense 60% rostered -The Patriots might be available in your waiver wire to add, as they will face the Texans. The Patriots’ defense will tee-off on rookie Davis Mills.

Vikings Defense 16% rostered - The Vikings are facing the Lions at home next week and are decent options to add now if you streaming defenses.

Raiders Defense 12% rostered - In deeper leagues the Raiders are an option to add now in ahead of Week 5 with a contest against the Bears. Whether if it’s Fields or Andy Dalton under center the Raiders

Falcons Defense 1% rostered - If you are in a deeper league and desperate for a defense the Falcons have the pleasure of playing the Jets and could be an excellent option to add for next week.

If you would like to further discuss this or have any questions you can reach out to me on Twitter at @smooth1074.