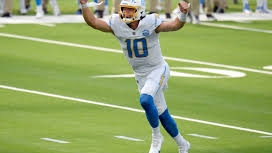 As we get ready for Week 5 of the NFL season, some fantasy managers are still reeling from Week 4, which saw a couple more stud running backs go down with an injury last week. Nick Chubb and Austin Ekeler who were both among the top 10 running backs drafted this offseason went down with injuries that will cost them both multiple weeks off fantasy rosters. Hopefully, your league has IR spots so that you can place them there while they recover. Lord knows what's in store for us this week as a couple more players on the Titans tested positive for COVID-19, most namely Corey Davis who be out for a minimum of three weeks. If you have any players on the Titans or Bills you may want to monitor that status of the game as it has already been moved to Tuesday and if another player test positive for COVID-19 it will be postponed for later in the season. Let's see if we can continue to be two steps ahead of our league mates in this week's preemptive strike.

Teddy Bridgewater, Panters 49% Owned - Over the last three weeks Teddy Bridgewater's fantasy game has continued to rise. He has gone from barely being drafted in standard leagues to being 50% owned in Yahoo leagues. Last week he led the Panthers to victory over the Cardinals with over 300 total yards and three touchdowns. This week he faces the Falcons who are giving up the most fantasy points to quarterbacks. The Falcons just got torched by Aaron Rodgers for 327 yards and four touchdowns. Add Bridgewater now as he will have favorable match-ups in three of the following four weeks including another game with the Falcons.

Justin Herbert, Chargers 44% Owned - Well well well, looks like Coach Anthony Lynn came to his senses and officially named Justin Herbert the starting quarterback for the rest of the season. The rookie has been straight-up on fire since taking over as quarterback for the Chargers. He's has averaged 310 yards and 1.6 touchdowns through his first three career games. Herbert has a few more favorable games coming that he should continue to strive in this offense. If your starter has started off shaky Herbert is a definite add and he should be owned in all leagues.

Daniel Jones, Giants 34% Owned - I don't blame you for looking the other way when Daniel Jones's name is mentioned. Jones has played like hot sewage so far this season but this is the game where his season will turn around. His first four games were against the top half of good defending teams and now he finally has a favorable match-up. The Cowboys have allowed on average 251 yards and 3.6 touchdowns over their last three games. Losing Saquon Barkley and Sterling Shepard has hurt his game but Jones should start putting together some nice games this week and beyond.

Damien Harris, Patriots 56% Owned - Not bad at all Mr. Harris. After being the talk of Patriots training camp, Damien Harris suffered a hand injury that forced him to Injured Reserve, missing the first three games of the season. But boy did he make his 2020 season debut in style. He rushed the ball 17 times for 100 yards. Everyone knows that the Patriots backfield is as murky as Yoda's swamp planet Dagobah in the Empire Strikes Back, but if he continues to see this many touches he may be a pleasant surprise for the second half of the season. Going forward other than James White in PPR leagues, Harris would be my pick as the running back to own on this team.

Phillip Lindsay, Broncos 52% Owned - Check your waiver wire to make sure that Phillip Lindsay is floating around in his life jacket. Before he suffered a toe injury in the season opener, Lindsay was set to split touches with Melvin Gordon for the Broncos. Now after practicing this week, he's set to return for Week 5. Lindsay has proven in the past that he's a fixture in this offense especially in PPR leagues, so if he's there grab him now before next week's waiver rush.

D'Ernest Johnson, Browns 45% Owned - Who in the blue hell is D'Ernest Johnson? Well, let me tell you he's the running back that's currently the RB2 for the Browns behind new starter Kareem Hunt. The injury to Nick Chubb opened the door for Johnson to come on in and boy did he. Johnson came into the game and promptly led the Browns with 17 carries for 95 yards. A pretty good performance for a player that was just one percent owned last week in Yahoo leagues. Hunt should be the bell cow now for the time being until Chubb returns but Coach Kevin Stefanski loves to run the football, therefore Johnson should still be involved going forward and is a worthy add in deeper leagues.

Justin Jackson, Chargers 37% Owned - Coming into the season everyone thought Justin Jackson would be the one splitting carries with Austin Ekeler but a quadricep injury and Joshua Kelley's play put a halt to that. Now with Ekeler's injury that placed him on injured reserve on Friday, the door has opened for Jackson to have a role once again with the Chargers. He should be owned in all formats as he is sure to be sharing touches with Kelley going forward.

Tee Higgins, Bengals 55% Owned - After a slow start Tee Higgins has an average of eight targets over the last couple of weeks. Super rookie Joe Burrow is starting to get fellow rookie Higgins the ball more which is surely a sign of things to come. Higgins yards total has steadily increased after missing the first game of the season and already has a couple of touchdowns. Higgins should be owned in 12-team leagues.

Mecole Hardman, Chiefs 41% Owned - WHAT! Mecole Hardman is 41% percent owned in Yahoo leagues come on ladies and gentlemen. It appears he's the cheapest receiving option to own and add to your fantasy rosters from the Chiefs offense. In fantasy, it's always wise to have pieces of great offenses, especially one that has game-breaking abilities. Fantasy managers always want the handcuff for stud running backs but on occasion, it's clever to handcuff stud receivers and that's what Hardman is for the Tyreek Hill. Despite being the fourth maybe fifth receiving option in this offense, Hardman has brought in a touchdown in consecutive weeks. Add Hardman now prior to the game if you have the space to save your waiver priority and/or FAAB for other players.

Laviska Shenault, Jaguars 32% Owned - Seems like Laviska Shenault is a steady fixture in this column on a weekly basis. After averaging 35 yards a game for the first three weeks of the season Shenault came through with 88 yards on five receptions in sixth targets. The rookie wide receiver's role should continue to rise as the season progresses and as long as D.J. Chark is in the line-up getting the opposing defense's attention Shenault will be to take advantage of the looser coverage and produce for the Jaguars and be a great weapon for Gardner Minshew. Add him now if you can and enjoy the ride.

Eric Ebron, Steelers 46% Owned - After having his best game as a Steeler the team had an unexpected bye due to the rash of Titans players that tested positive for COVID-19 last week. But now comes a juicy match-up for Eric Ebron and the Steelers. The Eagles are allowing the third-most fantasy points to tight ends this season and Ebron is sure to capitalize on this opportunity. With all of the weaponry that the Steelers have on offense, the defense coverage is sure to leave openings for Ebron to make plays. Grab Ebron now if you have T.J. Hockenson or Robert Tonyan on a bye or if you have an underperforming starter.

Mo Alie-Cox, Colts 39% Owned - Mo Alie-Cox is another player that has an excellent match-up this week versus the Browns who are giving up the fourth-most points to tight ends. Last week the Browns let Dalton Schultz accumulate four receptions for 72 yards and a touchdown. Expect more of the same for Phillip Rivers's number one red-zone target, as Alie-Cox has either caught a touchdown or received 100 yards in three straight games. Add the promising tight end as he should be owned in 12-team leagues.

Dallas Goedert, Eagles 45% Owned - If you have an open IR on your roster add him now before it gets closer to his return.

Jimmy Garrappolo, 49ers 34% Owned - Expected back this week and will have Deebo Samuel waiting for him with open arms, with an excellent match-up with the Dolphins.

Kirk Cousins, Vikings 30 % Owned - Those in need of a streamer this week has Seattle this week who give up the second-most fantasy points to quarterbacks.

Preston Williams, Dolphins 23% Owned - Williams has had a slow start to the season coming off an ACL injury, but believe in his talent as he is sure to start producing sooner rather than later.

Alshon Jeffrey, Eagles 19% Owned - Jeffrey was close to coming back this week for the Eagles but got ill and was listed out for the week. Wentz needs his number one wide receiver back bad.

Tim Patrick, Broncos 19% Owned - Patrick is in line for plenty of targets alongside Jerry Jeudy for the Broncos with Courtland Sutton out for the year.

Jamal Williams, Packers 15% Owned - Was heavily involved in the offense with Aaron Jones and we will be wanted commodity on waiver wire day coming off the bye.

Tua Tagovailoa, Dolphins 6% Owned - This is more for two-quarterback leagues in case he was dropped as it should be Tua Time soon.

Other players to add in deeper leagues: