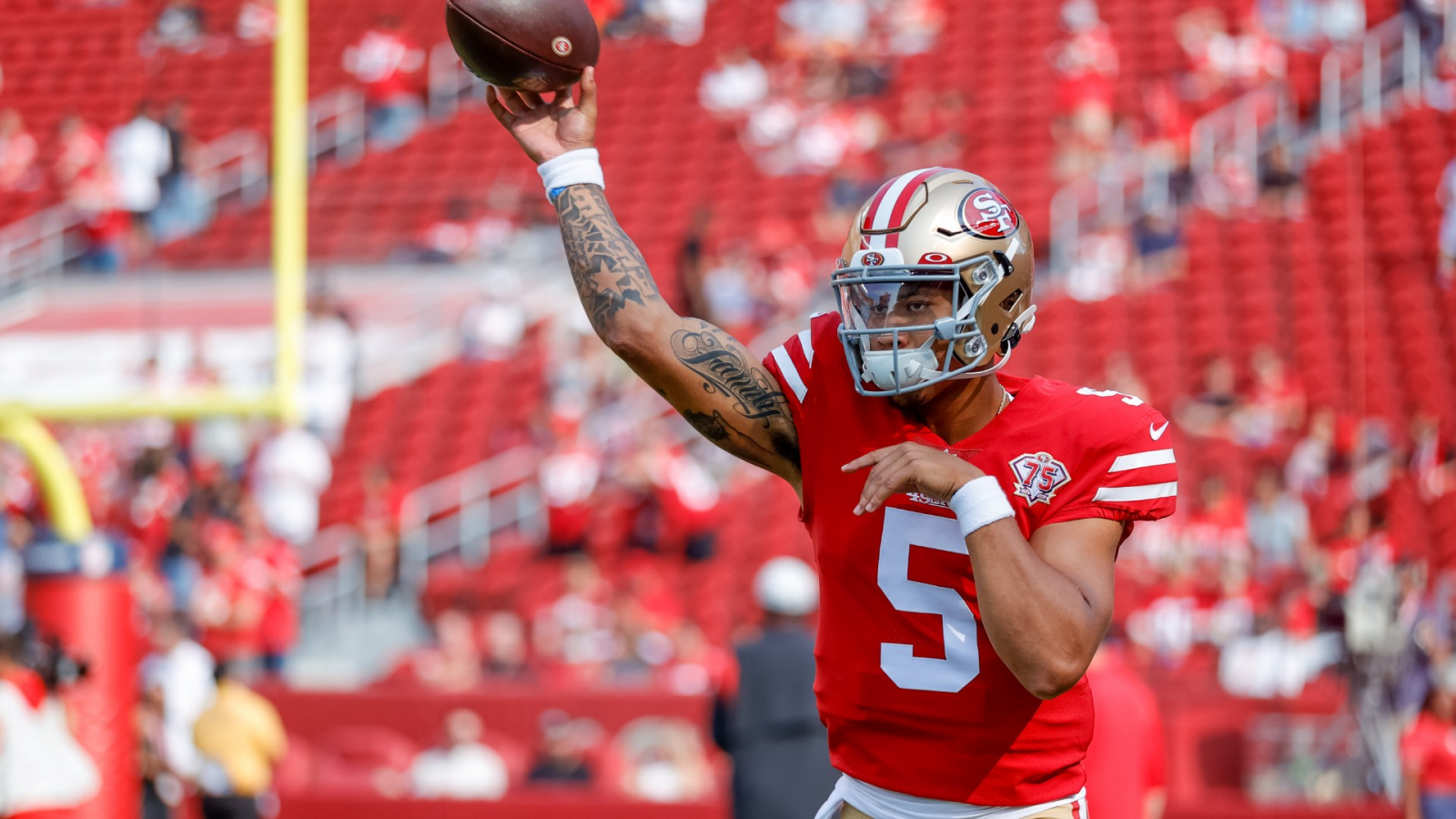 Welcome back to Week 5 of Preemptive Strike, where we try to get ahead of our league mates for next week’s waiver wire rush. As l look into my crystal ball, here are some names to add prior to this week’s games.

Check the waiver wire first to see if these quarterbacks are available to add first: Sam Darnold 57% rostered and Trevor Lawrence 50% rostered.

The Trey Lance era is about to take off, so get on board while you still can. Last week while taking over for an injured Jimmy Garoppolo, Lance threw for 157 yards and two touchdowns and added on 41 yards on the ground. With Garoppolo already ruled out for Week 5, Lance will be needed to keep up with the Cardinals’ high-octane offense. Keep in mind that the 49ers have a bye next week so this could be the perfect time to transition the offense over to Lance for the rest of the season. A must-add for all 12-team leagues. 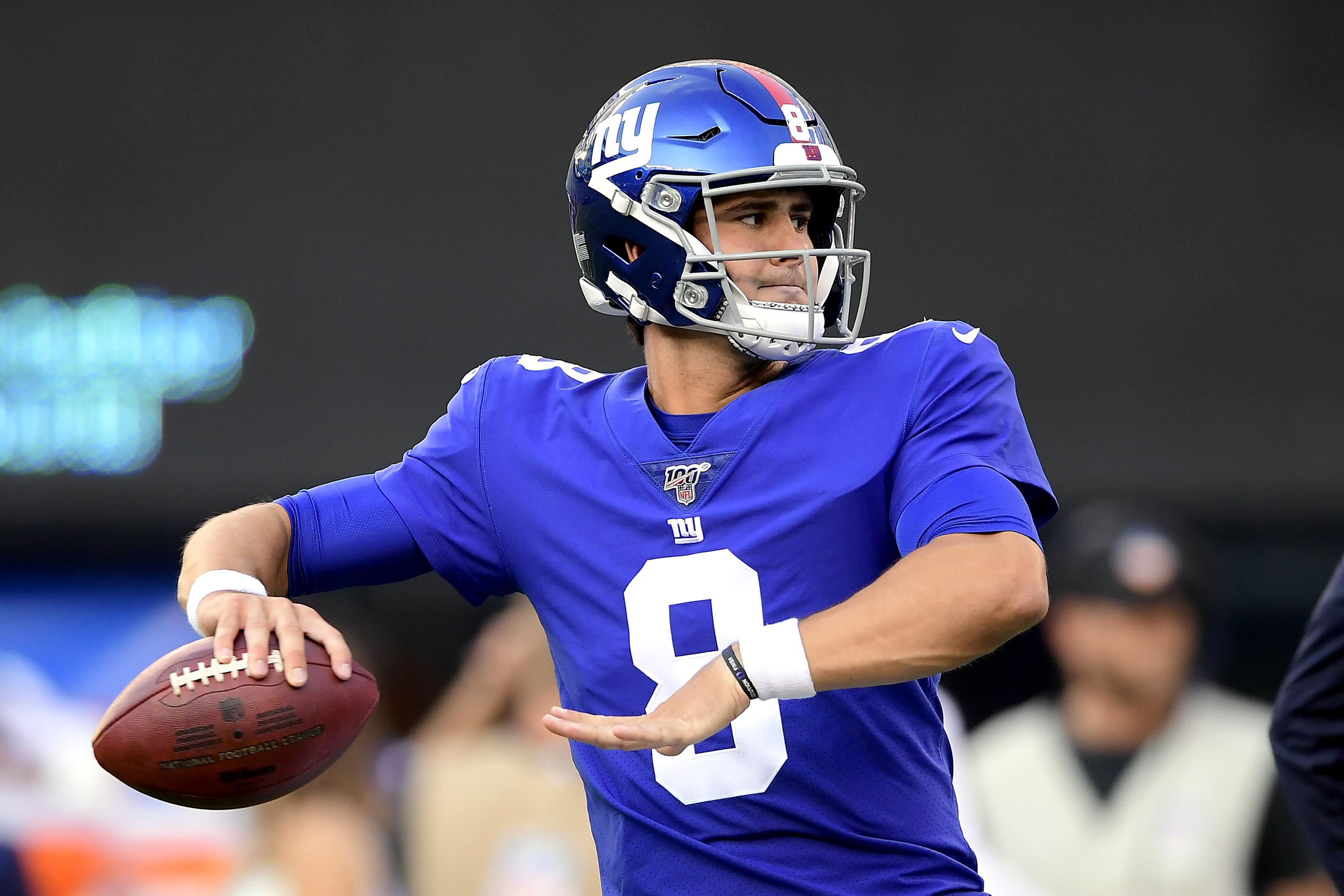 In Week 4 Daniel Jones passed for 402 yards and two touchdowns and added another 27 yards rushing on four carries. Now the Giants face the Cowboys which should lead to a possible shootout. After this game, Jones and the Giants could be in store for four consecutive high-scoring affairs. Therefore, this is the right time to add the Giants quarterback not only as a streamer but a possible fixture in your fantasy line-ups. Another must-add for 12-team leagues.

The rookie went toe to toe with Tom Brady on Sunday Night Football and almost pulled off the upset. Now Mac Jones is going to have some favorable match-ups upcoming in the schedule. After the Texans this week, Jones will have contests against the Cowboys, the Jets, and the Chargers that all have shootout potential. If you are looking for a solid QB2 in 12-team and 14-team leagues, Jones may be the player to add for upcoming byes.

Speaking of a quarterback that has been setting the league on fire, Taylor Heinicke has been doing some serious cooking since taking over for the injured Ryan Fitzpatrick. Many compare Heinicke to a young version of Fitzpatrick, and he has lived up to that billing. Heinicke must be owned in all 12-team league formats.

Fantasy managers in deeper leagues that are in need of quarterback help may want to consider Zach Wilson. Wilson showed life in his game last week with his 297 passing yards, two touchdowns, and an interception.

Check the waiver wire first to see if these running backs are available to add first: A.J. Dillon 65% rostered and Michael Carter 54% rostered. 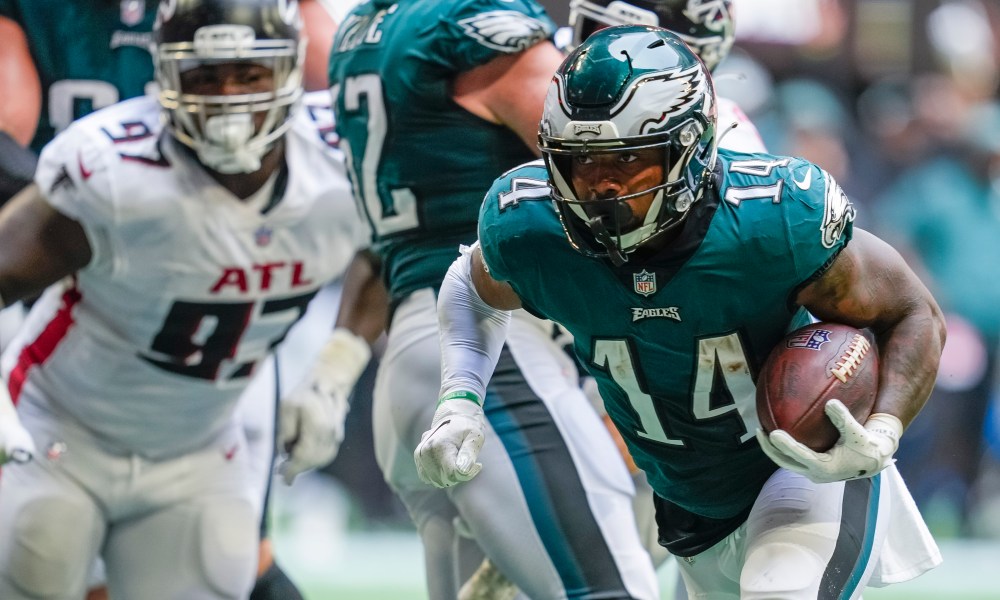 Kenneth Gainwell continues to eat into Miles Sanders’s touches, and to be honest I would rather own Gainwell instead of Sanders shares moving forward. Gainwell should be rostered in all league formats.

If you are looking for a PPR option at running back J.D. McKissic is your man. In two of his last three games, McKissic has brought in five receptions. The next two contests will be against the Chiefs and Packers making McKissic an ideal option in the receiving game as both games will likely be shootouts. Add McKissic in 12-team PPR formats.

With Joe Mixon nursing a sore ankle, there is a possibility for Samaje Perine to inherit a hefty share of the running back duties for Week 5 and maybe beyond. Add Perine now as Mixon will be limited in this one and then you will be able to cash in on Mixon’s insurance policy this week while being ahead of next week’s waiver wire rush.

Due to David Montgomery suffering a knee injury in Week 4, the door is open for Damien Williams to temporarily take over the majority share of the touches for the Bears. Williams too suffered a quad injury of his own, so Khalil Herbert may be called upon to take on some additional touches of his own. Add Herbert in deeper league formats.

Darrel Williams is Clyde Edwards-Helaire’s insurance policy that has seen touches continue to rise as the season progresses. Add him now if you have the roster space before your league mates do.

Now that it has been determined that James White is done for the year, the PPR specialist to emerge from the Patriots’ muddy running back situation has been Brandon Bolden. Bolden has proven that he is Coach Bill Belichick’s choice and he should be your’s as well in deeper leagues.

For the deepest of PPR leagues, Chris Evans is a name to add with Joe Mixon’s possibility of missing time due to his ankle injury.

Running backs to stash on your Injured Reserve (IR) List if you have it available in your league and extra space: Jeff Wilson 21% rostered, Tarik Cohen 10% rostered, Darrynton Evans 3% rostered, and Anthony McFarland Jr. 1% rostered.

Allen Robinson who? Seems like the Bears are showing their cards and involving Darnell Mooney more in the offensive game plan. With Robinson garnering most of the defense’s attention it has allowed Mooney to receive at least seven targets in three of the four games so far this season. If Mooney is there swimming around in your waiver wire pool, scoop him up now before it is too late.

There is no way in hell that Hunter Renfrow should only be rostered in 44% in Yahoo leagues. The wide receiver has been consistent as they come in PPR leagues by notching double-digit fantasy points in all four games this year. This is likely to continue going forward making Renfrow a must-add player in 12-team leagues.

With Will Fuller hitting the IR Devante Parker should continue to see an excellent share of the targets moving forward. Parker is averaging eight targets so far this season and he finally came through with a big game last week. Add Parker in 12-team leagues if you need receiving help.

Oh, the return of the PPR gold mine is here. Jameson Crowder finally returned to the Jets starting line-up and all he did was turn nine targets into seven receptions for 61 yards and a touchdown. It seems Zach Wilson likes his new toy and so should you. Add Crowder now while you still can in 12-team PPR leagues. 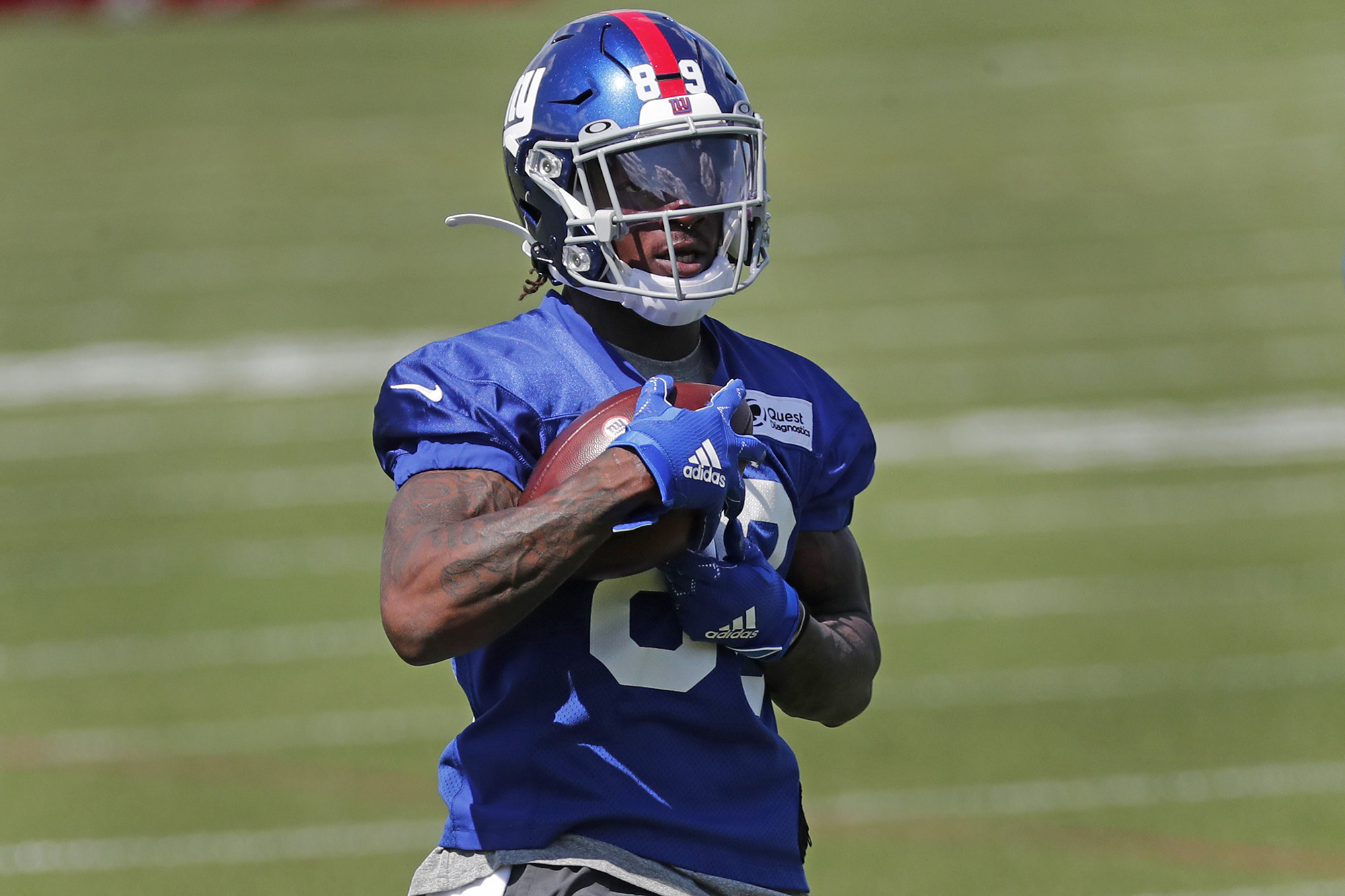 Kadarius Toney is a player who showed some electricity to his game with the extra playing time he received in Week 4. With Sterling Shepard and Darius Slayton out for the game in Week 4, Toney came through with six receptions for 78 yards on the nine targets he received. Toney showed he has the "It" factor and you may want to add him now before he really explodes in this week’s Cowboys' game.

Olamide Zaccheaus feels like the last man standing for the Falcons. With Calvin Ridley and Justin Gage missing the trip to London and out for Week 5, Zaccheaus is likely to see a greater role in the offense this week and should be considered a decent add for 14-team league fantasy managers desperate at receiver for this week.

This is for you dynasty leaguers out there. Check to see if John Ross III is hanging out at the waiver wire pool. He is finally healthy and is a big play waiting to happen. Last week in his first game for the Giants he had four targets and produced three receptions for 77 yards and a touchdown. So add him if he is available to see what happens moving forward.

Wide Receivers to stash on your IR List if you have it available in your league and extra space: Rashod Bateman 24% rostered, Michael Gallup 46% rostered, and T.Y. Hilton 21% rostered. 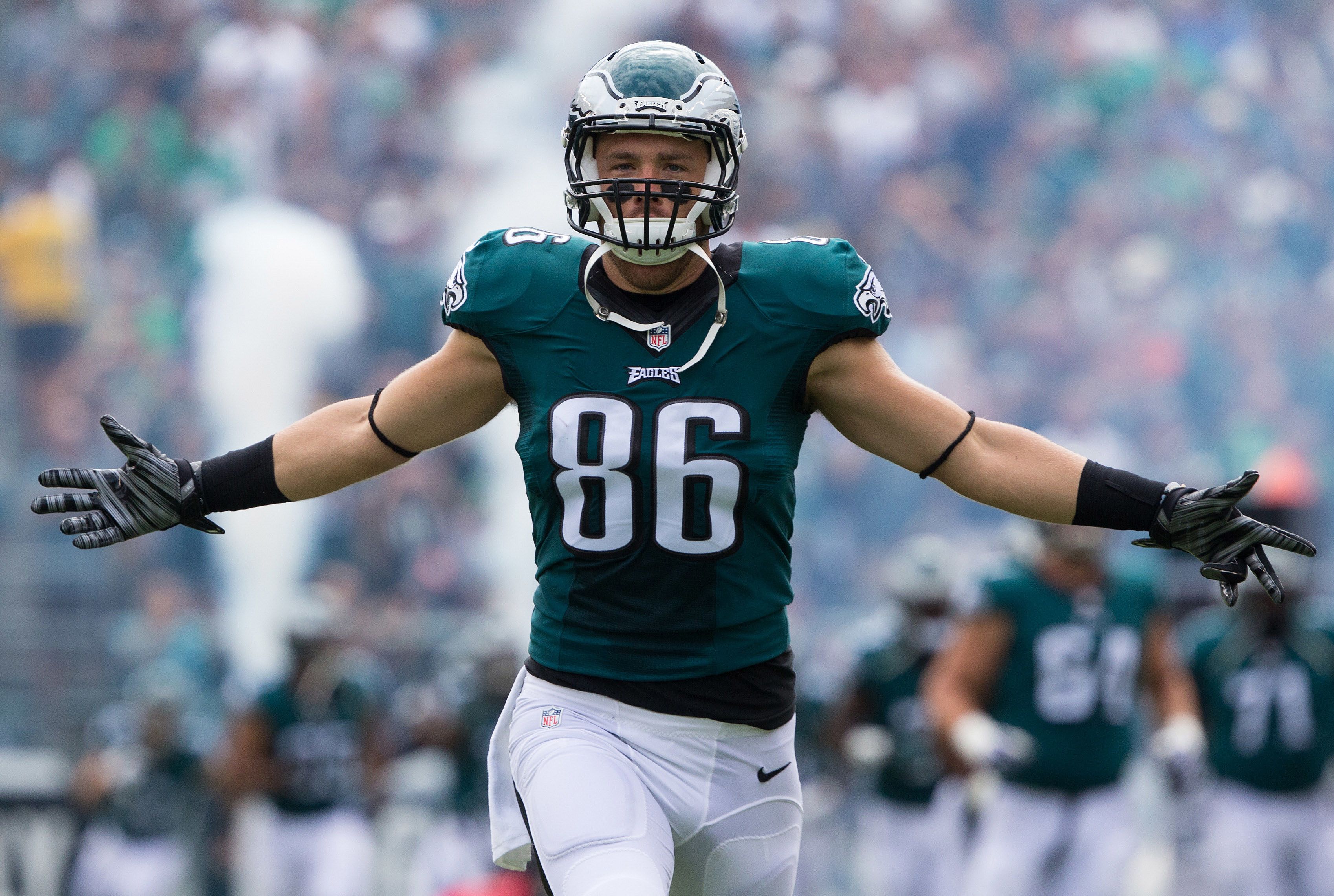 Zach Ertz should be rostered in more fantasy leagues. Ertz and Dallas Goedert are both producing for the Eagles so far this year. Over the last two weeks, Ertz has averaged 7.5 targets per contest and that should likely continue for the rest of the season. Ertz is a must-add in all league formats for fantasy managers who are looking for a George Kittle replacement.

With Tee Higgins missing Week 4’s contest, Joe Burrow was looking at C.J. Uzomah’s way early and often. Uzomah exploded for five receptions for 95 yards and two touchdowns. Although this breakout game came while Higgins was out of the line-up, Uzomah is still a tight end to add in deeper league formats, especially in tight end premium leagues.

Now for your deep league special. Logan Thomas has landed on the IR, and Ricky Seal-Jones’s time has arrived. Seal-Jones received four targets after Thomas’s departure from last week’s game, so he is a tight end to add if you are desperate at the tight end position heading into Week 5.

Here are some defenses to add for Week 6, if you are living that streaming life.

The Colts’ defense is 43% rostered and face the Texans.

The Packers’ defense is 26% rostered and battle the Bears.

The Bengals’ defense is 10% rostered and play the Lions.

Let me know what players you think should be on the Preemptive Strike for Week 5. If you would like to discuss this further or have any fantasy questions, you may reach me on Twitter @smooth1074.