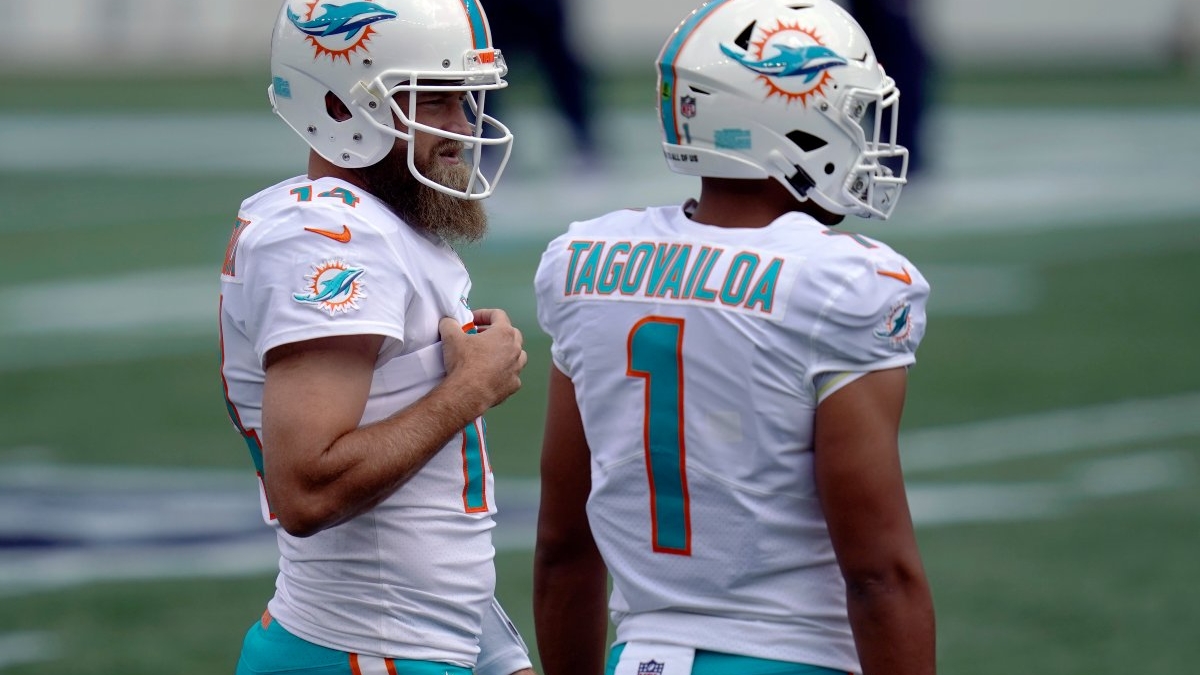 Well these past few days have been interesting, haven't they? We have a surprising new starting quarterback named, and we've had the return of All-World talent and headcase Antonio Brown back in the NFL (for now)with him signing with the Buccaneers. Hopefully, you read the article last week when it was mentioned that it might be time to pick him up in the quick hits section. As we gear up for Week 7 of the NFL, let's see if we can pull off any new waiver wire gems before the waiver wire rush next week.

Teddy Bridgewater, Panthers 43% Owned - Bridgewater had a rough one last Sunday with the Bears locking him down to just 216 yards and two interceptions. Look for him to do a little Taylor Swift and shake it off, and get the Panthers offense rolling again. Bridgewater should be in store for a great outing as he plays the Saints who are giving up the second-most fantasy points to quarterbacks this season, and right after that, he faces the Flacons who give up the most points to quarterbacks. Add him now and you have an awesome streamer and starter for the next couple of weeks.

Gardner Minshew, Jaguars 48% Owned - Minshew had an average performance against the Lions last week which made his ownership drop under 50 percent in Yahoo leagues. Prior to that, he was averaging 317 yards and almost two touchdowns over his last four games. This week he will be slinging it around to keep up with Justin Herbert and the Chargers. The Chargers are giving up the fourth-most fantasy points to quarterbacks this year making him a great addition for fantasy managers that have their starter in a bye this week.

Tua Tagovailoa, Dolphins 28% Owned - First of all I really wanted to mention how Ryan Fitzpatrick got blindsided by his own coach Brian Flores earlier this week when benched him in favor of Tua Tagovailoa. Some were shocked like yours truly (who's also a Dolphins fan) but it is understandable to see why the Dolphins have decided to move forward with Tagovailoa at the helm. Fitzpatrick had been playing great this season and had the Dolphins playing inspired football and are sitting at 3-3. But Coach Flores must feel it's Tua Time because he must have shown something behind the scenes to make the coach believe he's ready to roll. If he's ready to roll for Coach Flores, he's then ready to rock for your fantasy teams. Add him now while he is on bye before your league mates do, especially in 12-team leagues, and he should be owned in deeper formats.

Gio Bernard, Bengals 51% Owned - The news of Joe Mixon out for Week 7 has sent everyone rushing to their waiver wire to check if Bernard is available in their league. When given the opportunity Bernard has provided good fantasy production for fantasy managers. Last week while subbing for Mixon when he left the early due to injury, Bernard produced 11.80 fantasy points in PPR leagues. Now that he is in line to get the bulk of the touches Bernard should make a much bigger impact on fantasy teams. Add him now in all league formats.

Jamaal Williams & A.J. Dillon, Packers 47% & 10% Owned - Stop reading this and go check to see if any of these two players are in your waiver wires, as Aaron Jones is questionable with a calf injury this week. Okay, welcome back, the Packers usually play it safe with players that have soft tissue injuries like they did earlier this season when they sat Davante Adams with a hamstring injury. Jones is one of the main parts of this offense and if he sits both Williams and Dillon are sure to share a heavy workload. I would prioritize Williams ahead of Dillon but are must add in all formats.

J.D. McKissic, Redskins 39% Owned - McKissic has quietly and steadily seen his touches go up as the season has progressed in PPR formats. In the last couple of weeks, he has scored double-digit fantasy points and is starting to take touches away from Antonio Gibson. McKissic should be owned in all PPR formats as he will flex appeal going forward.

Keelan Cole, Jaguars 37% Owned - This year Cole has gotten no respect from fantasy managers. He has scored more fantasy points this season than fantasy football darlings D.J. Chark and Laviska Shenault. Cole has a favorable match-up this week against the Chargers and should get open with Chark and Shenault garnering all the defensive attention. Cole has scored in double figures in four out of six games this year and is proving that he can be trusted and should be owned in all league formats.

Tim Patrick, Broncos 26% Owned - Speaking of disrespected, Patrick has gotten hardly any love from fantasy managers so far this season. Ever since Courtland Sutton went down with a season-ending injury, Patrick has been on fire. He has either scored or gone over 100 yards in his last three games providing double-digits scoring in the process. In Drew Lock's first game back he was targeted eight times showing that Lock will look his way. With his ownership so low he should be available in most leagues and be must add in all formats.

Breshard Perriman, Jets 8% Owned - In Perriman's first game back in the offense from injury, he was targeted eight times and was able to bring in four receptions for 62 yards. With Le'Veon Bell gone the Jets being porous on defense, they may be headed to being a more passing heavy offense going forward.  Jamison Crowder is also listed as doubtful so he's heading to be out for the week. Perriman should be added in all league formats.

Trey Burton, Colts 21% Owned - Burton and the Colts are on a bye this week giving fantasy managers a chance to add him now. Burton has started taking over the tight end target share over the last three weeks for the Colts. With Mo Allie-Cox getting injured and Jack Doyle barely being targeted at all, has allowed Burton to rise in the offense pecking order. If Burton continues to stay healthy, he should stay in Phillip Rivers's list of favorites going forward. Must add in all formats.

Darren Fells, Texans 22% Owned - Fells has taken advantage of Jordan Akins being out due to being in the concussions protocol. Akins has been listed as questionable this week and has not practiced at all, which has him trending as out this week. This is good news for Fells to get another quality start for Week 7. If he has another good week, he will be highly added come waiver wire day. Fells has a bye next week but when he comes back he will have a couple of favorable match-ups versus the Jaguars and Browns. Grab Fells now as he is a must-add in 12- team and deeper leagues going forward.

Dalton Schultz, Cowboys 46% Owned - Was targeted five times by Andy Dalton in his first start at quarterback which at least illustrates he will still be targeted in the offense.

Joshua Kelly, Chargers 43% Owned - Kelley will continue to split touches with Justin Jackson and should be owned in all leagues.

Laviska Shenault, Jaguars 39% Owned - Add Shenault as he continues to see plenty of targets and he just had a 73 percent snap share last week.

Denzel Mims, Jets 4% Owned - Mims is a very talented rookie who just got activated off IR in time for Week 7. Jamison Crowder is listed is doubtful with a groin injury, so Mims will have a chance to make a splash in his debut.

Cole Beasley, Bills 39% Owned - He continues to be as consistent as they come, and is an excellent add in all PPR league formats.

Logan Thomas, Washington Football Team 26% Owned - Thomas has averaged four targets over his last three games and is a good streamer this week for fantasy managers in a bind at tight end.

Tevin Coleman, 49ers 25% Owned - Could return from IR next week and be the starter with Raheem Mostert out on IR himself.

JaMycal Hasty, 49ers 19% Owned - Could be inline for the majority share of the workload with Mostert and Coleman on IR and lead the team with nine carries last week.

La'Mical Perine, Jets 16% Owned - Perrine should get plenty of touches moving forward with only Frank Gore standing in his way.

Irv Smith Jr., Vikings 7% Owned - Starting to be more involved in the offense and has scored double-digit fantasy points in the last couple of weeks.

Gus Edwards, Ravens 6% Owned - Led the Ravens in rushing attempts last week after Mark Ingram got injured in Week 6. Edwards is a great add in deeper leagues and dynasty formats.

Ke'Shawn Vaughn, Buccaneers 6% Owned - Needs a Ronald Jones injury to become relevant on a consistent basis. Vaughn is a good stash at this point.

David Njoku & Harrison Bryant, Browns 4% & 0% Owned - Both Njoku and Bryant are players to add in deeper leagues as Austin Hooper had an appendectomy and is out this week and he may be out Week 8 as well.