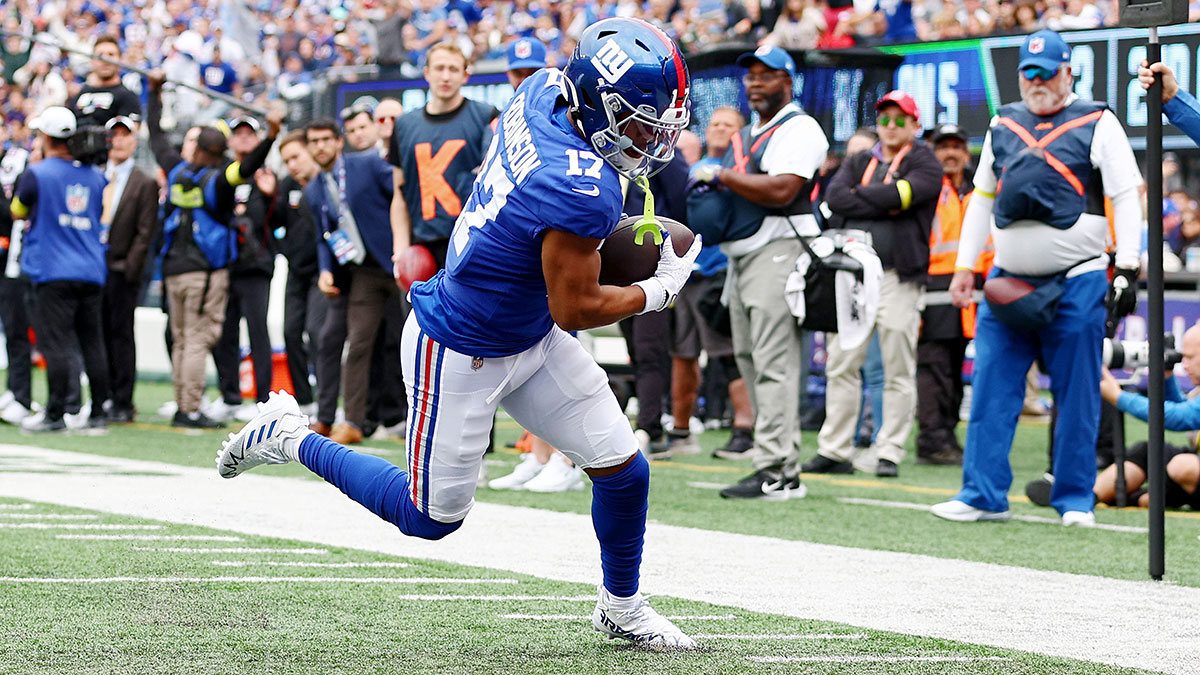 With Halloween closing in on us, this season has definitely felt like our fantasy teams have either been a trick or treat. The trick has been thinking that we have a solid draft or team, only to see championship aspirations get derailed by an injury. The treats have been having a healthy productive fantasy team or being able to find players on the waiver wire to counter these, making a fantasy team not miss a beat. Like always the Preemptive Strike player list will focus on giving you some players to add or stash depending on your league size and needs. It's time to open up a nice cold adult beverage relax and let's see what players you can add this week before your league mates try to add them next week. After a rough start to the season, Justin Fields was one of the most droppable players after the first four weeks of the season. Now it seems like Fields has started to turn things around. Fields is illustrating he is a dual threat like many thought he would be. Not only has Fields thrown a touchdown in three straight games, but he has also averaged 72.3 rushing yards in that span. Fields has a match-up against the Dolphins in Week 9 who allow the seventh most fantasy points to quarterbacks this season.

Justin Fields showed tonight why I’ve always said this man has all the tools to become a star in this league. It’s only a matter of time! 📈 pic.twitter.com/Va15T27EsQ

If you are thinking long-term in deeper leagues, Kenny Pickett has numerous favorable match-ups down the stretch for the Steelers in the second half of the season.

Ryan Tannehill is hobbled by an ankle injury and has been ruled out for Week 8. That has led to opportunity knocking for Malik Willis to get the start this week. The Titans face the Chiefs in Week 9 who are giving the second-most points to quarterbacks in 2022. The Titans will unleash the rookie this week, making Willis worth an add in two-quarterback and super-flex leagues.

Well, it’s time to mention adding Deshaun Watson to fantasy squads as he is six games away from returning to the starting line-up for the Browns after serving his 12-game suspension. If you are sitting pretty and are looking like a lock for the playoffs you may want to get ahead of the curve and add Watson now.

A running back that has seen his rostered percentage rise without playing a down this season, is Kyren Williams. Williams is a talented running back that has been on Injured Reserve (IR) for the entire season. The Rams have already designated him set to return. With Cam Akers apparently out of the picture, it’s time to add Williams because there is only an injury-prone Darrell Henderson Jr. in front of him. Should Henderson go down with an injury, Williams will be positioned huge role in this offense. You add Williams now and stash him on your IR spot for now and be ahead of your league mates.

Isiah Pacheco was named the starter for the Chiefs last week and is on bye this week. This led to his roster percentage dropping under 50%. If this is the case in your league snatch him now before next week’s waiver wire rush.

When the Jaguars traded away James Robinson to the Jets, that made Travis Etienne’s value fly through the roof. I don’t think Etienne isn’t built to withstand the continuous pounding between the tackles. This makes JaMycal Hasty an excellent addition in deeper leagues. Head coach Doug Pederson has already said that Etienne will not get more touches and that Hasty’s touches will increase. If you’re looking for a running back to add that seems to be in line to garner more touches Hasty could be your guy.

Shoutout to former #49ers RB JaMycal Hasty with a 61 yard TD run for the #Jaguars. pic.twitter.com/u4lCgNLVpF

With Chubba Hubbard out for Week 8, Raheem Blackshear is a name to contemplate adding in not only deep leagues but dynasty leagues as well. Blackshear is a deep flier who showed off what he can do in the preseason. I know  I know it was only preseason but Blackshear rushed 24 times when he was with the Bills at the time and he gained 116 yards, to go along with two touchdowns. If you have a spot way down on your roster and looking to stash in these league formats, Blackshear is another deep add.

Wowsers, Wan’Dale Robinson is still just under 50% rostered in Yahoo leagues. With the news breaking that Kadarius Toney was traded to Kansas City, it reaffirmed that Robinson is the Giants' WR1 for the rest of the season. I’ve been pounding the drum for Robinson since the summer and it looks like it’s time for him to become a target monster. Robinson should be added in all league formats.

Wan'Dale Robinson has already solidified himself as the Giants' WR1.

He shouldn't be available in a single fantasy football league after waivers run tonight.

This team has been desperate for a playmaker to step up next to Saquon Barkley, and they found him.

Parris Campbell has come on strong in the last two weeks being a target monster for the Colts. In the last couple of games, Campbell has been targeted 23 times and produced 17 receptions for 127 yards and two touchdowns. The veteran receiver must be added to all 12-team leagues.

Parris Campbell had 10 receptions and a receiving TD today! pic.twitter.com/VoIrj71eUK

A sneaky add this week is Mecole Hardman. Hardman just had a breakout game where he had three total touchdowns (two rushing, and one receiving). What makes Hardman sneaky is that he is on a bye this week. While many fantasy managers are focusing on this week, Hardman is a wide receiver to add in 12-team leagues. I would add Toney first if both are available.

Reports are that Van Jefferson is about to return from IR for the Rams this week. The Rams’ offense has sorely missed Jefferson on offense as he’s the one wideout that can stretch the field. Once he’s implemented into the offense, that should open things up for everyone. Look to add Jefferson in 12-team leagues.

The Rams officially activated WR Van Jefferson and CB Troy Hill out of IR window and onto the active roster.

After coming off the IR two weeks ago, Greg Dukcich has seen his target share triple from three to nine. He should continue to be an intricate part of the offense for the rest of the season and be a TE1 for fantasy managers. The rookie tight end is a must-add in all league formats in my opinion. Just keep in mind he is on bye for Week 9.

Over the last three weeks, Evan Engram has averaged 7.7 targets per game, and looks like he is going to be one of Trevor Lawrence’s favorite targets for the rest of the season. If you are in need of a tight end for the remainder of the season or need a streamer for Week 9, Engram is perfect for your needs. Next week the veteran tight end goes up against the Raiders who are allowing the fourth-most points to tight ends this season.

TEs with the highest target shares over the last month

With David Njoku out for Monday Night Football this week, Harrison Bryant is set up to have a significant role on offense. Bryant could be used as a steamer this week for deeper league fantasy managers that have Travis Kelce or Gerald Everett on bye this week. The Browns are on bye next week so make a mental note of that.

Harrison Bryant figures to be the next man up for Cleveland. Njoku joins Kelce and Gerald Everett as tight ends that will miss Week 8. https://t.co/VF5zHD9NFG

Defenses to Stream for Week 9

Cincinnati Bengals Defense 37% Rostered goes up against the Panthers.