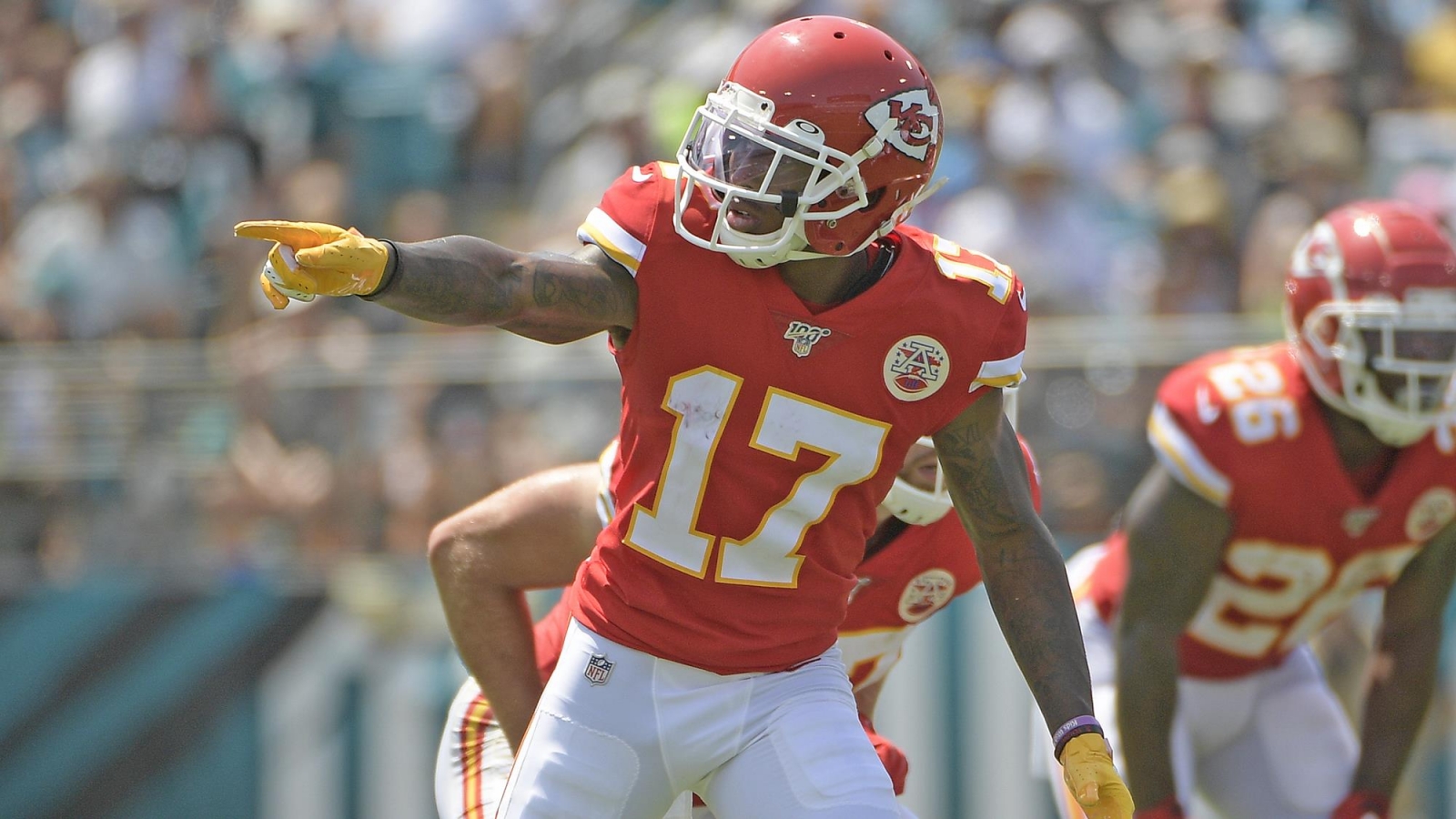 As we gear up for the second half of the season, hopefully, you are in a position to make a run at the playoffs and championship moving forward. Remember all you have to do is just make the playoffs, then anything can happen. So if you have been struggling, focus on getting that last playoff spot. Let's see if we can get ahead of our league mates to make that playoff push.

Derek Carr, Raiders 42% Owned - Not only does Derek Carr have a juicy match-up this week against the Chargers who are giving up the fifth-most fantasy points to quarterbacks this season, but next week he will also face the Broncos who just gave up 30 fantasy points to Justin Herbert last week. If you need a streamer this week or next week Carr is a good option if he is still available in your league.

Baker Mayfield, Browns 34% Owned - Many fantasy managers may want to shy away from Baker Mayfield now that he has lost Odell Beckham Jr. for the rest of the season. But when he comes off a bye next week Mayfield will be facing the Texans who are allowing the seventh-most points to quarterbacks. Next week he will also get one of his weapons back, as Austin Hooper is set to return after missing the last three games due to an appendectomy. Also possibly returning next week is Nick Chubb which is another exciting weapon coming out of the backfield alongside Kareem Hunt. Mayfield is another streamer for 12-team or deeper leagues for Week 10.

Drew Lock, Broncos 20% Owned - Drew Lock gets the pleasure of battling the Falcons this week who are giving up the most fantasy points to quarterbacks this season. Lock is a great addition for this week and next week for fantasy managers that have their starters on a bye.

Tua Tagovailoa, Dolphins 24% Owned - Not only will Tua Tagovailoa have to sling it around to keep up with Kyler Murray and the Cardinals this week, but next week he will battle fellow rookie Justin Herbert at home. Both games are sure to be shootouts, so add Tagovailoa now to beat the waiver wire rush.

Jake Luton, Jaguars 3% Owned - Will Jake Luton keep the injured Gardner Minshew on the bench, only time will tell. Luton may unlock the talented Jaguars receiving core moving forward if given the chance. Luton should be added to all two-quarterback or Super-Flex leagues.

Tony Pollard, Cowboys 34% Owned - Tony Pollard has been mentioned in this column all season long as Ezekiel Elliot's insurance policy/lottery ticket. Well looks like it may be time to cash in that policy. This week Elliot is listed as questionable with a hamstring injury and if he ends up being ruled out Pollard will be in line for the majority of the work this week against a tough Steelers defense. Pollard is a must-add in all formats.

Jordan Howard and Patrick Laird, Dolphins 33% & 4% Owned - With Myles Gaskins being placed on injured reserve earlier this week with a knee injury and Matt Brieda out with a hamstring injury, it opens the door for both Jordan Howard and Patrick Laird to become viable options this week. In standard leagues, Jordan is the play as he should get most of the early-down and goal-line work. While in PPR leagues, Laird should be a must-add, as the Dolphins should be playing from behind this week and next week, and will give Tagovailoa an option out of the backfield.

Joshua Kelley, Chargers 42% Owned - Joshua Kelley is splitting the touches evenly with Justin Jackson and he should be owned in all formats.

La'Mical Perine, Jets 35% Owned - La'Mical Perine is an add for 12-team leagues with him splitting touches with  Frank "Forever Young" Gore. Perine gets a favorable match-up this week with the Jets facing the Patriots who are giving up the 10th-most fantasy points to running backs this season.

Matt Brieda, Dolphins 27% Owned - With Myles Gaskins on IR, Matt Brieda would have been the running back to own if not for an injured hamstring he suffered last week. Add him if you can as he could return next week.

Jordan Wilkins, Colts 27% Owned - Jonathan Taylor's insurance policy. Jordan Wilkins has proven that he has a little stand-alone value of his own already.

Brian Hill, Falcons 13% Owned - Over two of the last three games, Brian Hill has had 10-plus carries and continues to see his usage grow throughout the season for the Falcons. If Todd Gurley goes down with an injury lookout.

Eno Benjamin, Cardinals 0% Owned - With Kenyan Drake out, Eno Benjamin could possibly see his role grow in the offense.

Mecole Hardman, Chiefs 35% Owned - While Sammy Wakins was out last week, Mecole Hardman saw his highest target share of the season with nine targets and he produced seven receptions for 96 yards and a touchdown. Watkins is out once again for the Chiefs for Week 9, and if Hardman continues to get more targets than Demarcus Robinson, Hardman should have another good showing. The Panthers defense will be focused on trying to stop Tyreek Hill and Travis Kelce this week which will allow Hardman to get open. Hardman could be in store for a strong second half of this season, so add him now while you can.

Jalen Reagor, Eagles 24 % Owned - When Jalen Reagor made his debut right before this week's bye, Reagor gave fantasy managers a small taste of what he could do. In his first game off the IR, the rookie was targeted six times and was able to bring three receptions for 16 yards, but one of those receptions was for a touchdown. Reagor was drafted in the first round of this year's draft for a reason and he should be in store for a strong second half of the season. Add him now while he is on bye as he will be a hot commodity come waiver wire request day.

Dez Bryant, Ravens 19% Owned - For deep leaguers Dez Bryant is a name from the past that should have everyone's attention. Bryant is attempting to make a comeback this weekend. He has not played in a game since December 31st, 2017, and is set to make his Ravens debut on Sunday. The Ravens signed him to their practice squad last week and have activated for this week's contest with the Colts. Even though he is sure to be limited in his debut, he may be worth a speculative add to see what role he will carve out for himself in this great offense. One thing is for sure, is if he can prove he is healthy, we all know he has the talent to be a stud for your fantasy teams down the stretch for a championship run.

Henry Ruggs III, Raiders 42% Owned - Henry Ruggs III has the talent to be productive in the second half of the season all he needs is the targets. Ruggs may be to boom or bust for some owners, but I'd rather he be booming on my team than someone else's.

Laviska Shenault, Jaguars 29% Owned - Laiska Shenault is another talented receiver that just needs to be incorporated more into the offense. Hopefully, new starter Jake Luton will look his way and make that happen.

Curtis Samuel, Panthers 29% Owned - Curtis Samuel's rising value will take a huge hit with the return of Christian McCaffrey this week, but he is a receiver to add in 12-team or deeper leagues.

Tim Patrick, Broncos 21% Owned - Tim Patrick is expected to return from an injured hamstring this week and gets to play against the Falcons this week that give up the fifth-most fantasy points to wide receivers so far this year.

Preston Williams, 18% Owned - Preston Williams has been inconsistent so far this season after returning from his torn ACL he suffered last season. But his talent should prevail sooner rather than later and is worth an add for deeper leagues at this point, especially dynasty leagues.

Jakobi Meyers, Patriots 8% Owned - Jakobi Meyers should continue to be productive with Julian Edelman on IR and N'keal Harry out this week. Posted six receptions for 58 yards on 10 targets last week when both Edelman and Harry were out.

Steve Sims, Washington Football Team 2% Owned - Steve Sims is returning from the IR this week and if you remember correctly he was the WR2 in Washington's offense prior to getting injured. Great add in deeper leagues.

Antonio Callaway, Dolphins 0% Owned - For dynasty owners, add Antonio Callaway now if you have the roster spot as he was signed to the Dolphins' practice squad in early October and just got off suspension. He may be inserted into the active roster as early as this week.

Dallas Goedert, Eagles 55% Owned - Dallas Goedert is just over the 50% ownership threshold, but I just wanted to bring him so you may make sure he is not floating around in your waiver wires. He returned prior to this week's bye for the Eagles to get his feet wet and is in store to being a TE1 moving forward. Add him now for free before next week's waiver wire rush.

Austin Hooper, Browns 39% Owned - Austin Hooper has been out over the last couple of weeks due to an emergency appendectomy procedure that he had, so the Browns' bye week came at a great time for him. He is scheduled to return for Week 10 and is a must-add as he was averaging almost eight targets a game prior to the procedure. Look for that to possibly increase with Beckham out for the rest of the season.

Trey Burton, Colts 23% Owned - Trey Burton is the tight end to own in this offense as not only is he the best receiving tight end for the Colts but is also being used as a running back at the goal line over the last couple of weeks and has two touchdowns to show for it.

Albert Okwuegbunam, Broncos 1% Owned - For deep leaguers and dynasty owners Albert Okwuegbunam is a tight end to grab if you have space at the end of your rosters. He will be involved in the offense moving forward and plays the Falcons this week, who give up the most fantasy points to tight ends this season. If Noah Fant were to miss any time due to injury watch out.