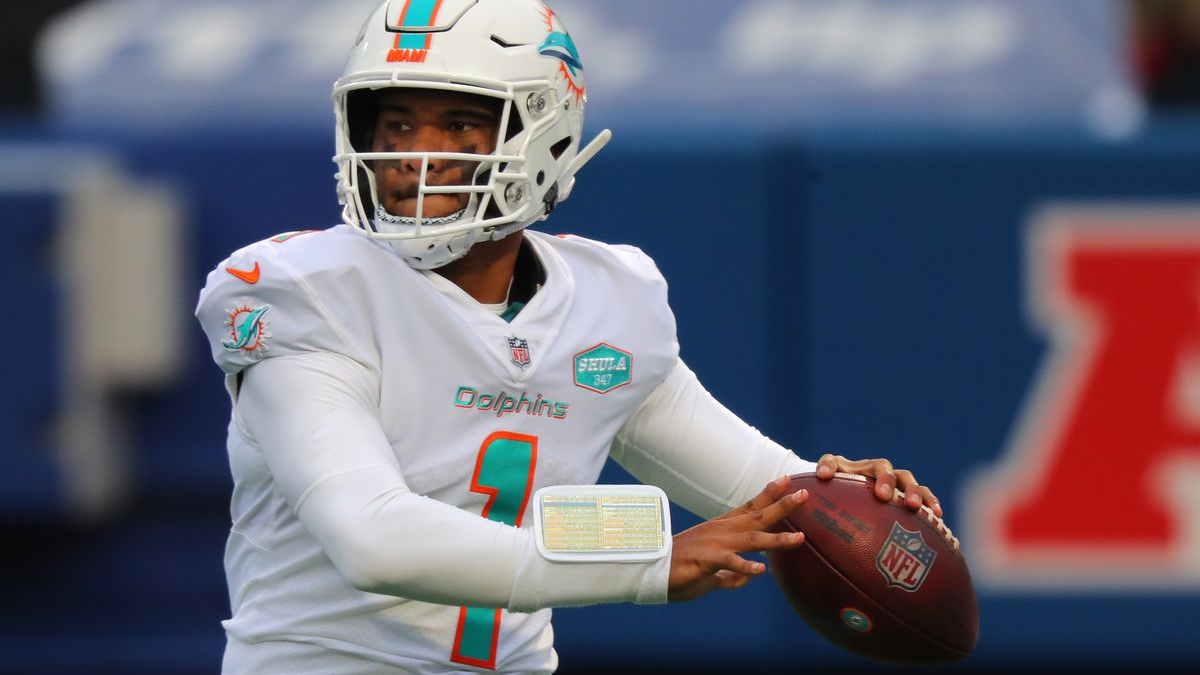 Much like life in general, the performance of NFL stars is full of ups and downs. Coaches change, players leave in free agency, and frankly, sometimes players just lose it. This article will address some players who underperformed in 2020 who I believe will have a rebound season in 2021. Today, let’s focus on quarterback bounce-back candidates.

The quarterback most primed to breakout this season is Carson Wentz. This season, he’ll be reunited in Indianapolis with Frank Reich. If you’re unfamiliar with their relationship, Reich, the Colts’ Head Coach, was the Offensive Coordinator in Philadelphia the year Wentz was drafted. The two seemed to have an instant connection, and Philadelphia recognized it, rewarding Wentz with a $128 million, 4-year contract in June 2019. Unfortunately, Reich left shortly after the Eagles’ Super Bowl win, and Wentz’s numbers reflected the departure in every category. 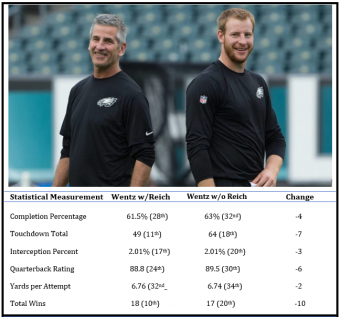 Wentz was also plagued his last years in Philadelphia with a lack of receiving weapons, a lackluster run game, and a sub-par offensive line. To really drive the point home, Travis Fulgham was the leading receiver on the team in 2020 with a meager 539 yards.

All of these woes look to be rectified in Indianapolis. Wentz will be playing behind one of the top two offensive lines in the league, anchored by the best-left guard in the game, Quenton Nelson. In 2020, Nelson only allowed ONE sack, compared to 21 total team sacks. This number is a stark contrast to the 65 sacks allowed by the Eagles in 2020. As Wentz has proven himself a better pocket passer than a scrambler, he looks to greatly benefit from an upgraded offensive line.

Another benefit of a stout offensive line is an improved run-game and more balanced offense. Although the Eagles put up a slightly higher team rushing total than the Colts (2,027 vs. 1,996), 354 of those yards were added at the end of the season by Jalen Hurts. The Colts have a more balanced offense, allowing Wentz more flexibility to read defenses, stay in the pocket, and execute the plays.

Wentz will also have many more dynamic receiving weapons in Indianapolis with Michael Pittman, T.Y. Hilton, Parris Campbell, and the big tight end, Mo Alie-Cox. Where the 2020 Eagles struggled in the passing game, finishing 28th (3,327 yards), the Colts finished 11th with 4,186 total passing yards (and this was with an aging Philip Rivers under center).

Finally, the Colts have a better defense than the Eagles, which will help take the pressure off Wentz to scramble and play catch-up. A balanced run-game and a good defense is a Godsend for a struggling quarterback. It’s just one of those intangibles that helps keep the offense in a good headspace.

All of this said I don’t see Wentz being a QB1 his first season, but I do see him being a serviceable fantasy option in the form of a backup or streamer option. If you’re in a deep league or a super-flex league, don’t pass him up.

Before we go any further, we have to address the elephant in the room; 2020 was not the year for Daniel Jones on paper. He finished 29th of all starting quarterbacks in touchdown passes with 11, and he also threw ten interceptions. I can see that you may be skeptical about him going into the 2021 season, but hear me out.

First, Saquon Barkley is back, and, by all accounts, he’s looking better than ever. Jones has proven to be markedly more efficient when Barkley plays. In the 15 games that Jones has played without Barkley in his career, he has a passer rating of 77.1, 12 touchdowns, and 13 interceptions. Conversely, in the 12 games Jones has played with Saquon, his passer rating improved to 91.5, he’s thrown 21 touchdowns and only 9 interceptions. There are still fumble concerns with Jones, but most of those fumbles also occurred when Barkley was out with injury. 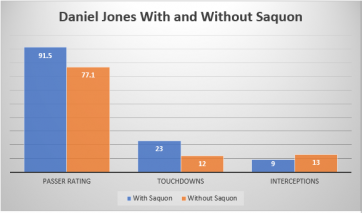 The New York Giants also made some offseason moves to add some receiving weapons for Jones. They added deep threat Kenny Golladay in free-agency, drafted the elusive slot receiver Kadarius Toney, and added veteran tight end Kyle Rudolph. Last year, Darius Slayton was the leading receiver with a respectable 751 yards, but as a whole, the passing offense faltered. The Giants finished 28th in the league with 3,026 yards. Golladay battled injuries throughout the 2020 season, but the year before he had a 1,000 yard+ season and led the league in receiving touchdowns. I see no reason he doesn’t return to that form in New York.

Finally, the Giants have also added pieces to improve their defense. As I touched upon with Carson Wentz in Indianapolis, a good defense allows the offense to rest, keeps them from playing catch-up, and allows a quarterback to stay in the headspace to make good decisions. Jones’ rushing upside was his saving grace last season, resulting in a 24th place finish, but with these added improvements and vital pieces of his offense back, I can see him jumping into the 15-20 range. Keep him in mind for your QB2.

Joe Burrow got dealt a bad hand last season. He played behind an atrocious offensive line, he had very few weapons, and his devastating injury cut his rookie season short. When you look at the numbers, the ensuing injury was really no surprise. Burrow was sacked 32 times in ten games, resulting in a loss of 231 yards. However, despite the poor offensive line play, Burrow only threw five interceptions, tied for best of all quarterbacks on the year. Due to the incredibly large number of sacks, Burrow’s QBR of 56.2 looks worse on paper than it should. 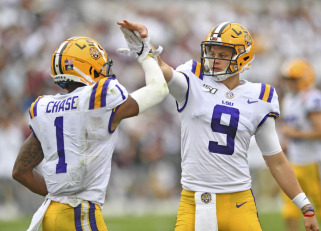 This year, the Cincinnati Bengals seem to have learned their lesson. They spent three picks on offensive linemen in the 2021 draft and added Riley Reiff in free agency, a huge step forward in preventing sacks and their first-round pick. They also reunited Burrow with his NCAA National Championship teammate Ja’Marr Chase. The Bengals frequently run an 11-personnel scheme, and Chase, along with Tyler Boyd and Tee Higgins, is the final piece of the three wide receiver set. If all these pieces fall into place, I’m seeing Burrow finish the season in top 10-15 territory. Book it!

Much like Burrow, we only saw a limited sample of Tua Tagavailoa’s skill-set last season. He only played in ten games, but in those games, he was fairly inconsistent. There were times where he showed why he was the fifth overall pick in the 2020 draft, such as Week 8 against the Arizona Cardinals. He ended the game with an 87.3 QBR, throwing for 248 yards and two touchdowns. However, there were also games when he looked very much like a college player; he ended Week 17 with a 20.2 QBR against division rival Buffalo Bills.

I think Tua gets much more consistent this season. He’s one more year removed from his devastating hip injury, and he’s had another year to study the playbook. Miami also added deep threats Jaylen Waddle and Will Fuller V, giving Tagovailoa more options in the passing game. The Dolphins also signed center Matt Skura in free agency and added an offensive tackle in the draft, but their line is still at the bottom of the pack. Miami will need to address this to truly give Tua a chance to succeed. Still, I can see Tua finishing in the 15-20 range.

Any other quarterbacks you think will take a step forward in 2021? Let me know @Britt_Flinn on Twitter. Keep an eye out for running backs I think breakout this season in the next article. As always, thanks for reading!