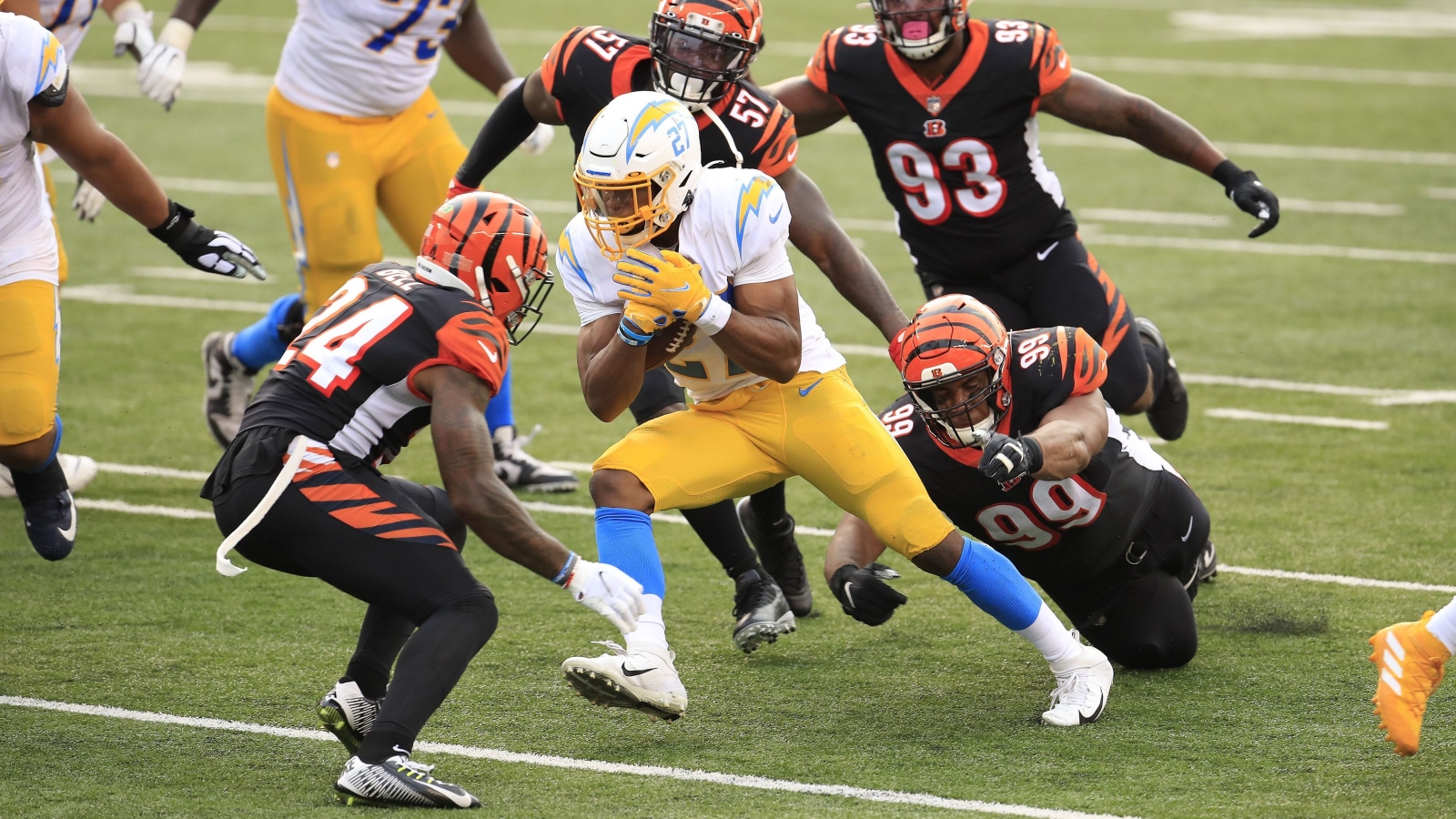 Welcome to the Rookie Report! Watching the rookies throughout their first season is one of my favorite things to watch during the season. In this article, we look at some of the risers and fallers after their first games against real NFL defenses.

3 catches, 37 yards, TD, 2 carries, 10 yards   His debut stat line is not one that pops off the page but in a game that Gardner Minshew only threw the ball 20 times it’s good enough to raise some eyebrows. We went into the week not knowing what exactly what we were going to get out of Shenault, and how they would use him but getting five touches is a very positive sign from the athletic freak. This was a game that they were in but with the state of their defense, we can expect more shootout type games that Minshew has to air it out to stay in the game which is going to really help Shenault’s volume going forward.

16 carries, 62 yards, 1 catch, 28 yards   In a very depleted backfield, James Robinson was the one who was able to take the lead back role for the Jaguars this week. With Devine Ozigbo on IR and Ryquell Armstead on the COVID list, this backfield is James Robinson’s to give up as well. He handled 100% of his team's carries which is definitely something to mention because they had Chris Thompson healthy and he only saw two touches which means they have a lot of trust in Robinson. Make sure he’s not on your wire anywhere because if he continues to have success, his stock could be quickly on the rise in a big way.

12 carries, 60 yards, TD   This is great news for Kelley. Kelley owners were desperately hoping that Kelley would be the thunder to the Ekeler lightning and when Jackson got dinged up Kelley was there to answer the call. On the snap report, he only had 18 snaps on offense but still managed to carry it 12 times at 5 yards a carry and find the endzone. Austin Ekeler owners are a little bit wary of the fact that he only caught one pass this Sunday but if Ekeler starts getting targets instead of carries those carries could funnel back to Kelley giving him season-long appeal as well as a drastic uptick in his dynasty value.

4 catches, 56 yards  For those tuning in closely to a very highly anticipated debut, Jeudy didn’t disappoint. He didn’t put up crazy numbers and have over 100 yards and a couple touchdowns like we saw from a couple rookies last year, but realistically we couldn’t expect that with no preseason games. Even without preseason games, Jeudy looked great against a very good Tennessee defense. We knew that he was quick, had good footwork, and ran really good routes. He was exactly as advertised. With Courtland Sutton coming back soon, his field is going to open up much more and we’re gonna see some really good weeks from the first-round pick.

5 catches, 59 yards  Another debut that was highly anticipated but his status on the team was a little different than Jeudy’s. Jeudy had to be his team's top wideout but CeeDee was third on his teams depth chart at receiver. That didn’t stop him from grabbing five balls for 59 yards and looking great doing it. One takeaway from Lamb in Week 1 was that tackling in the NFL is in fact much better. That was about the only knock that anyone could find on Lamb was that he had so many yards after the catch in college and benefited from Big 12 tackling but on Sunday night we saw him getting taken down in situations that in college he would get away and rack up the YAC. This is of course not a concern of Lamb just again the only thing to keep an eye on because he still looked great in his debut. With Jarwin going down with a torn ACL, that just puts more targets on the table for Lamb and should give him plenty of room to become a household name this season.

25 carries, 138 yards, TD  What a debut from the man so famously dubbed CEH. Not only did he pop off in his first start he led the league in rushing for the week. No catches was incredibly surprising, especially when he came off the field for Darrell Williams on third downs, but we have to assume that the passing work is going to come otherwise the Chiefs would have drafted Jonathon Taylor to pound the rock inside the tackles. However, seeing that he is able to carry the load and be efficient doing it is phenomenal news for him. Watching him juke Justin Reid out of his shoes on his first scamper into the end zone is even better. The hype-train is full speed ahead so it’s time to get on or get out of the way.

7 carries, 22 yards, 2 TDs   Not an out of this world line but it is telling that the Ravens trusted him in the red zone to punch it in. The reason that I have him as a riser is that we saw him get 7 of the teams 22 carries that went to running backs. Mark Ingram got 10, Gus Edwards got 4 and Patrick Ricard got 1, but seeing Mark Ingram not dominate the touches was very encouraging. This season could still be difficult to figure out the value of the Baltimore backfield but in dynasty circles, all signs are pointing up for Dobbins after two scores.

2 catches, 16 yards   Not a big day by any means but the fact that he was just on the field and getting targets is worth noting. Expected by most to be a player to stash, he’s become a guy to keep an eye on. His big body is something that the starting trio in Buffalo doesn’t have so he could definitely give a different dimension to the offense and force his way on the field.

1 catch, 9 yards   It was reported before Week 1 that Ruggs and Edwards were going to both start so the Twitter family was ready to fire him up everywhere. However, he was on the field for 46 snaps and Derek Carr who threw the ball 30 times, only looked Bryan Edwards way once. Not very encouraging for someone that we had high hopes for going into the debut. Ruggs got banged up during the game and looks to be okay now, but should he miss time keep an eye on Edwards to see if he can take advantage.

Healthy Scratch   For somebody who was quickly creeping up value charts in the offseason, this is not encouraging. The Steelers elected to run out James Conner, Benny Snell, and Jaylen Samuels this week and when Conner hurt his ankle early, Benny Snell racked up 119 yards solidifying his backup role to Conner. We’ll see what happens next week if Conner is to miss time but we’ve also seen homerun hitters like McFarland and Darrell Henderson have a difficult time making their playstyle work in the NFL

2 catches, 10 yards   In what was an interesting game for the Colts against the Jaguars, Michael Pittman only brought in 2 passes. None of the game was great news for Pittman after Philip Rivers targeted running backs 17 times and gave 9 targets to each of T.Y. Hilton and Parris Campbell. Pittman was also only tied for eighth on the team in targets. If those trends continue it could be a difficult year for those expecting Pittman to be a redraft mainstay and might take an injury to one of the receivers for Pittman to get a significant opportunity.

Mims has had a difficult time just getting on the practice field since getting drafted. He hurt his hamstring and missed all of the team drills during training camp and returned last week but hurt the other hamstring. Hamstring injuries can be tricky and he was placed on IR after the games this week. He won’t be able to make his debut for at least three more weeks

Higgins was dealing with a hamstring injury during camp but was able to get back onto the field shortly before Week 1. He was able to see 15 snaps against the Chargers, tied with Mike Thomas and Auden Tate. Hopefully, we’ll see his snap counts go up but he is going to have to beat out John Ross to get them.

It was a punch in the stomach when we saw the speedster hobbled on the sideline of his debut. We weren’t sure if it was his knee or his ankle but he managed to make his way back onto the field again but failed to catch any passes after the injury. He said after the game that it was just a knee tweak and he’s feeling good so hopefully, we can see him back on the field next week for the whole game.

Another rookie with a hamstring injury is what kept Brandon Aiyuk out of Week 1 for the 49ers. In an apparent upset by the Cardinals, San Francisco is going to be looking for some playmakers going forward so they really need Aiyuk back on the field. Shanahan said that he would “be surprised” if he doesn’t play Week 2 vs the Jets. Very good news for the first-round receiver.

Definitely not a rookie but worth noting what happened to him. Mack tore his achilles after being listed as the starter over Jonathon Taylor. Nyheim Hines is clearly not going away after Philip Rivers showed his love of throwing to the running back wasn’t just a Chargers or Austin Ekeler thing but Jonathon Taylor no longer has that nagging between the tackles running back in front of him.