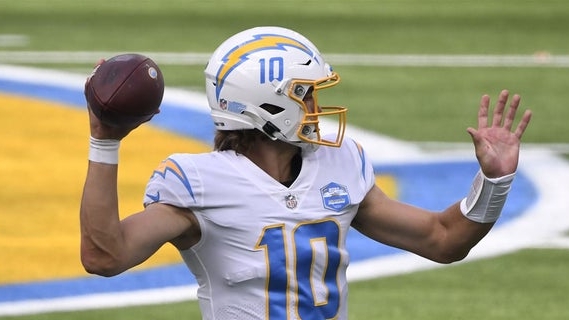 37/61 316 yds, 3 TDs, 7 carries, 19 yds, Fumble   Joe Burrow was advertised as one of the most pro-ready prospects to come into the league maybe since Andrew Luck. On Thursday night we saw him airing it out while playing from behind almost the entire game throwing it 61 times. He wasn’t all that efficient only totaling 316 yards on 61 attempts but the offense around him didn’t look all that good either. A.J. Green had 13 targets and only pulled in 3 and his offensive line had him running for his life all night. While the efficiency wasn’t great, it was clear to us watching that Burrow is here to stay. The Bengals are clearly a team that is far from being fully put together with personnel around Burrow but a game with 61 attempts, no interceptions and three touchdowns is a great sign for the number one pick.

6 tgs, 3 catches, 36 yards   In last weeks report I had Higgins on the injury report after getting just 15 snaps coming off a hamstring injury but he got on the field for 60 of the teams 92 snaps which was second among the Bengals wide receivers, more than A.J. Green. He got six targets and caught three of them for 36 yards. Not a very high total but it is definitely a good sign for Higgins. He was a rookie that most viewed as the eventual A.J. Green successor but we assumed it would take some time. That could come sooner than later as Green really struggled to bring in passes this week and only played 57 snaps. Higgins is not completely polished and needs to get stronger to fit his playstyle but that should come with time and experience. He’s not ready to be plugged into lineups yet, but the snap counts are a very good sign that he is getting closer to being relied on by the Bengals and fantasy owners.

26 car, 101 yds, TD, 2 rec, 9 yds   Safe to say that Jonathon Taylor has arrived. Last week when Mack went down we knew that it was his time but figured Nyheim Hines would still have a role after his week 1 usage. In somewhat mystifying fashion, Hines did a disappearing act and was only on the field for nine snaps making way for Jonathon Taylor to take the workhorse role. For the second week in a row we saw a rookie eclipse the 100 yard mark and Taylor even found the endzone. Last week I said that the Clyde Edwards-Helaire train was full speed ahead and this week it’s Jonathon Taylor. Once again it’s time to get on or get out of the way.

3 tgs, 3 rec, 88 yds, TD   On Sunday, Big Ben found Claypool deep for an 84 yard touchdown. Coming out of college, some didn’t know if he was going to play tight end or receiver but he blew up the combine and was expected to find a deep threat role in the Steelers offense and we saw that on Sunday. Ahead of him Diontae Johnson and Juju had great games both catching more than seven passes and he was out-snapped by all three of Diontae, Juju, and James Washington. Despite this, seeing him succeed in his expected role is something that should catch our attention. He’s getting on the field and succeeding so keep an eye on his spot on the depth chart. If he can pass James Washington he could be closer to fantasy relevance than we originally anticipated

16 car, 102 yds, TD, 3 rec, 18 yds   On Sunday we saw a second 100-yard game out of a rookie. Back in May, if you said that James Robinson would be the third rookie out of this class to have a 100 yard game on the ground people would call you crazy. Robinson was on the risers last week but I couldn’t keep him off this week's as well after he ran for more than five yards a carry, found the end zone and showed value in the passing game. All of a sudden this offense that nobody wanted any part of in the offseason is showing signs of life. They hung in there til the end against the Titans after beating the Colts last week and are being led by Gardner Minshew, James Robinson, and Keelan Cole. 2020 has been a wild year and here’s another twist. The Jaguars might actually be good and James Robinson could be a league winner. I hope you grabbed him while you could because he’s the guy in Jacksonville.

3 tar, 3 rec, 36 yards, TD   Much like last week's inclusion of Gabriel Davis, Darnell Mooney was a player to wait and see on and now he is a player to keep an eye on. We knew the Bears needed some new playmakers and they have tabbed Mooney to be that guy. In a game that Anthony Miller didn’t have a single catch, the fifth-round pick got three targets and hauled all of them in, adding a touchdown to it. Keep an eye on Mooney as his athleticism pops and could add a deep threat to the offense.

13 car, 55 yds, TD, 1 rec, -1 yd   Antonio Gibson's chance is here. When he was announced as a running back on draft night it raised eyebrows but with Guice, Peterson, Barber, and McKissic all on the roster, the opportunity was not all there. Guice is out of the league now and Peterson got cut before the season started so the opportunity for Gibson is here. We still weren't sure if he would be unleashed as a running back with only 33 college carries but after Week 1 Scott Turner said they were still trying to ease Gibson in. Week 2 we saw his role increase and the hype could be coming to fruition. His big-play ability is going to be fantasy gold if he is unleashed as the workhorse

22/33 311yds, TD, Int, 4 car, 18 yds, TD   In a bizarre chain of events Tyrod Taylor had an injection for his chest injury that turned into difficulty breathing, and right before kickoff Herbert was named the starter. In his debut, he had flashes of a veteran game manager as they got the lead early against Kansas City and managed to keep it until the 4th quarter. He also flexed his big arm on his way to 311 yards through the air, a touchdown, and showed his mobility by rushing for one as well. After the game, Anthony Lynn said that if Tyrod Taylor is healthy he’s the starter but apparently he wasn’t watching the same game that we were because Herbert looked fantastic and Taylor had a hard time getting anything going last week against the Bengals. Herbert becomes the full-time starter sooner rather than later or Anthony Lynn is going to end up on the hot seat.

1 car, 9 yds, 9 tar, 6 rec, 106 yds   Lamb is the second player in the risers for the second week in a row. In a shootout with Atlanta, CeeDee led the Cowboys in receiving. Similar to what I said last week about Lamb, we didn’t know if there were enough targets to go around between Cooper, Gallup, and Lamb but CeeDee has seemed to have taken the mantle and ran with it. He isn’t getting the leftovers, he’s forging his own path. Gallup has put up duds in back to back weeks and Lamb is turning into a season-long mainstay. Those who had him as their top receiver in the rookie class seem to be right.

It’s still really difficult to start fading rookies this early because it’s still way too early to give up on rookies or fade their value when they’re still acclimating to the NFL but there can still be red flags going up right now. Here are some of said red flags.

2 car, 48 yds, 1 rec, 13 yds   After having him as a riser last week, Dobbins only got three touches this week. He didn't waste them racking up 61 yards but only getting three touches and watching Gus Edwards get 10 carries and Mark Ingram 11 touches ahead of him isn’t great news. It’s going to be difficult to predict that backfield for the rest of the year.

8 car, 37 yds   After an encouraging Week 1, Moss didn’t see any targets and only carried the ball eight times. Singletary got 12 touches in a surprisingly close game with Miami this week which means that it’s going to be difficult to project this backfield this year. For those who were hoping that Moss would take the opportunity and run away with the starting job might need to slow their roll. It’s going to be a committee of young backs and the odds of one running away from the other is not incredibly likely at this point.

3 tar, 3 rec, 44 yds   While Jefferson led the team in receiving after having 2/26 last week, the Vikings passing offense looks abysmal. Whether it’s the offensive line or an inability for receivers to get open the passing attack isn’t something to chase. While Jefferson seems to be taking strides as a rookie, the Vikings offense is one that we want to avoid for the time being. They only ran 52 plays Week 1 and 54 plays Week 2. There needs to be significantly more volume of a bad offense thus far before we can start to trust Justin Jefferson.

3 tar, 1 rec, 4 yds   After last week when Ruggs tweaked his knee, he seemed to be used as a decoy for the offense. While he was busy taking the top off the defense, Derek Carr fed Darren Waller. Only seeing three target's isn't all that encouraging except that he did manage to get an interference call but other than that it was a quiet night for the rookie who got the start. Look for him to try and bounce back next week with more screens and hopefully some deep shots from Carr.

Cam Akers separated some rib cartilage that pulled him out of the game after he had just three carries. Sean McVay provided an update on Monday that said he should be okay and is day to day. Hopefully he is back in the lineup again in Week 3 but it’s worth noting that Darrell Henderson totaled 121 yards and a touchdown on 14 touches. Should he return, it’s a hot hand committee situation that he’s coming back to.

Aiyuk returned to the lineup after a hamstring injury and had two catches for 21 yards. The 49ers blew out the Jets and only threw the ball 16 times so two weeks off his return next week should be a great opportunity for Aiyuk to emerge among a dead sea of receivers for the 49ers.