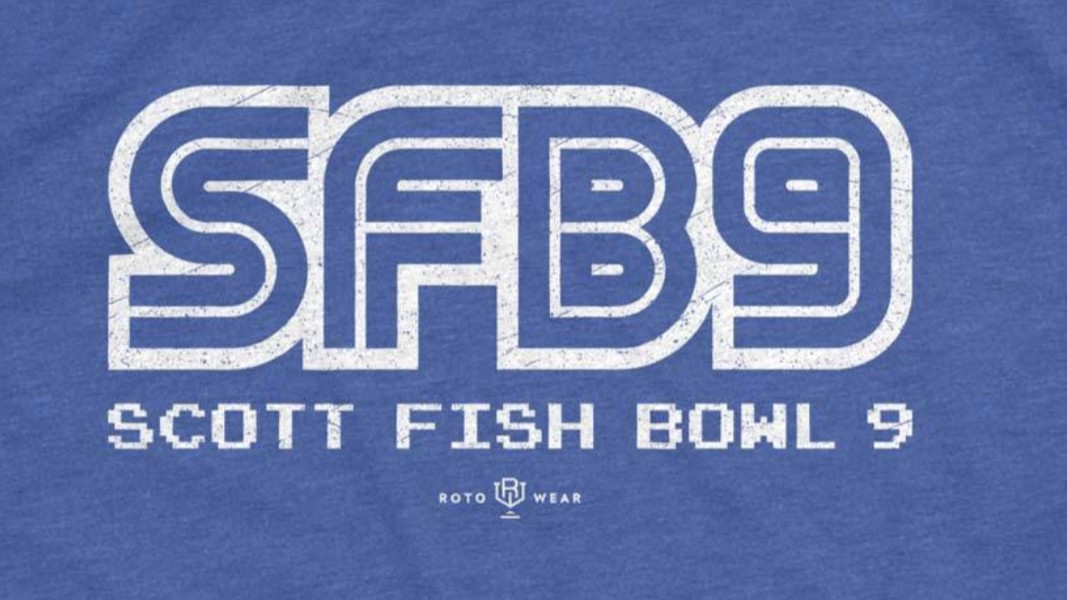 For many fantasy football players the idea of being in a 1200 person league with no large cash prize would seem a waste of time.  That isn’t the case for the lucky group selected to partake in “Scott Fish Bowl 9” or SFB9 for short.

A who’s who of fantasy analysts from every major outlet are in this contest.  Think you’ve got the chops?  SFB9 will test you.  Think you can outsmart the entire industry?  Here’s your shot.

For those not in the loop the Scott Fish Bowl raises money for Fantasy Cares, an organization that gives to needy children.  Scott Fish, the founder and namesake has found cult status in the industry while maintaining a humbleness not often found in today’s society.

So here I am.  I landed a coveted spot in the tournament and I find that I’m drafting 10th in my 12 man “Cole McGrath Division”.  All of this years divisional themes are based on old video game characters.  Truth be told I have no idea who the hell Cole McGrath is.  Whatever lets draft.

My division is stacked.  I’ve find myself up against guys from sites such as Rotoworld, GuruElite, numberFire, FantasyPros, Athlon Sports, and others.  Sooooo yea.  This is going to be good.

With the unique scoring of this league: Tight Ends get .5 extra points for catches and first downs and everyone can obtain 50yd rushing/receiving bonuses you have to have a plan and work it accordingly.  Oh and you can start two QB’s.  With no trading this is essentially a best ball league with waivers.

Couple those facts with the idea you have to beat out 1199 other people then this is really about finding breakout talent that will separate you from the pack.  Being safe won’t win here.  Taking the same approach as everyone else will get you nowhere.

I found a lot of wisdom from a Twitter DM group made up from dozens of other SFB9 1.10 drafters.  We started by sharing ideas on draft strategies.  Many guys were looking to snag an elite TE and QB early.  From these talks I learned what I didn’t want to be and that is like everyone else.  I wanted to take chances.  I didn’t like the way my roster would look if I spent early picks on QB’s.  I’m a gambler, I’ll play some chicken with the QB.  Give me talent at other positions and I’ll snag QB value later on.

OK draft day!  Let’s do this!  At 6:30am I’m in the gym listening to the SFBPodathon which was fantastic.  So many big hitters giving their two cents on how to attack this fantasy gauntlet.  Now if I could only get to my pick!

My divisions draft started slow.  Real sloooooooow.  I would see posts on Twitter from guys who were in the 5th round and I had yet to pick.  I get it people have lives but c’mon I’m excited here.

Finally it was my turn to draft.  Surprisingly every QB was still on the board.  This was something I hadn’t thought would happen but then again knowing my plan I wasn’t too concerned.  I could get QB’s who can hit the 300 yard milestones or be rushing dynamos in later rounds.  To my amazement Melvin Gordon was sitting there.  This was a day or two before his hold out so don’t @ me.  To me this was a no brainer.  Give me a bell cow back who also catches passes and can get me those bonus thresholds.

Back around the turn at 2.3 I’m on the clock again and with the TE premium scoring I wanted to land one of the top players at the position.  Zach Ertz was available and ripe for the picking.  I don’t care about the regression talk with Dallas Goedert gaining more market share.  If Ertz still only catches 80 balls he’s going to outscore WR’s who catch 100.  Easy choice.  I’m liking my start.

Now the long wait until I pick again at 3.10.  In that span I see three QB’s (Mahomes, Watson, and Luck) all go off the board.  Basically it looks like your standard home league draft to this point.  My target here is Damien Williams.  I’m a buyer on him.  Maybe not his talent but his role in the offense.  He goes one pick before me to Josh Norris of Rotoworld.  No worries I’m still looking for the next big thing.  Someone who I think will be a first rounder next year and I land him in Aaron Jones of the Packers.  Double digit TD upside and as I’ve been harping on, the ability to gain bonus points on the ground and as a receiver.

Into round four and I don’t have a single WR on my roster.  Some guys are going WR heavy considering you can start seven if you wanted.  This though is only half point PPR.  I’m going to lean RB’s who contribute in the pass game over WR’s.  Better shot the backs get me those 50yd bonuses than a WR here.

Time to take a shot.  Tyreek Hill is still on the board and I’m salivating.  Now this was before the news of no suspension so I’m flying blind here.  (Note: I don’t condone how he lives his life but this game is about fantasy football so I’ll keep it about talent on the field).  At 4.3 I pull the trigger on the Chiefs playmaker.  Landing a guy who could be the overall WR1 in the early 4th round is how you take that step towards the winners circle.

As my turn in round 5 comes I’ve seen 10 QB’s go off the board.  My waiting game has gone on long enough.  So I need to find a QB who can net me bonus points for throwing for 300 yards… OK maybe this Drew Brees guy will do?  He netted that achievement six times last season.

6 rounds in and I’m feeling good.  I need more upside.  I can’t take low ceiling guys.  I need league winners.  The point is to win the league right?  Nobody remembers anyone except for who holds the trophy.

With that mindset. I dropped the hammer on my next five picks.

Now not all of these guys are going to hit.

Trubisky can RUN and I’m hoping those legs and another year in Matt Nagy’s smart system nets me mega bonus points.

Darrell Henderson is the lottery ticket.  The Rams traded up for him because they want that chess piece Sean McVay has been searching for since he failed with Lance Dunbar.  Oh by the way I heard their lead RB has bad knees so yea I like this pick.

Will Fuller just catches touchdowns.  Those sound good to me.

Ronald Jones is an enigma.  His film is bad.  He can’t catch.  But something about only needing to beat out Peyton Barber to be the lead back for Tampa Bay excites me.  I’ll take that shot.  My other option here was Sterling Shepard.  Nobody is looking back in December and saying, “Thank goodness I drafted Sterling Shepard to get me 4 for 60”.

Now I’m going value hunting.  Who’s has slipped through the cracks?  Who’s is going to play a major role on their offense but is still on the board?

At 11.10 I find my man in Marquez Valdes-Scantling.  Whether he’s inside or outside I’m excited to get what could be the second option in the Packers offense.  He’s 24-years-old and excelled last year for a 5 week stretch where he was a top 25 WR.

Remember my game of QB chicken?  Well others are now playing it with their third signal caller.  In a league where you can start two then you better have three.  They are drying up quick.  I look at the board and I’ve been letting the position slide for a few rounds.  I see a guy go here or there but most are holding off in this section of the draft.  I don’t want to be left without one or having some garbage option like Josh Rosen.  I think Nick Foles will surprise in Jacksonville.  He’s going to play mostly out of the shotgun, have a running attack, and have a lot of opportunities to push the balls down the field under OC John DeFilippo.  Foles is my guy. So my QB stable is now complete with Brees, Trubisky, and Foles.  I can continue taking shots at upside while others are going to be left without a third QB.

Let’s round the draft with smart plays who on a given week can help me score big points!

15 - Anthony Miller - Healthy and a perfect fit for Nagy’s offense.

18 - Trey Quinn - Not exciting but a floor play.  Will lead Redskins in catches.

With the Chris Conley pick my SFB9 draft finally came to an end.  As I sat on my condo balcony in Virginia Beach I scanned my roster and felt like I’ve set myself up for success in a league of this type.  Work the wire and get some luck and who knows maybe I’ll be a household name in fantasy football because of this squad.  Swinging for the fences will win this league.  With this lineup I feel like I’m playing with a corked bat.  Let’s go win the whole damn thing. 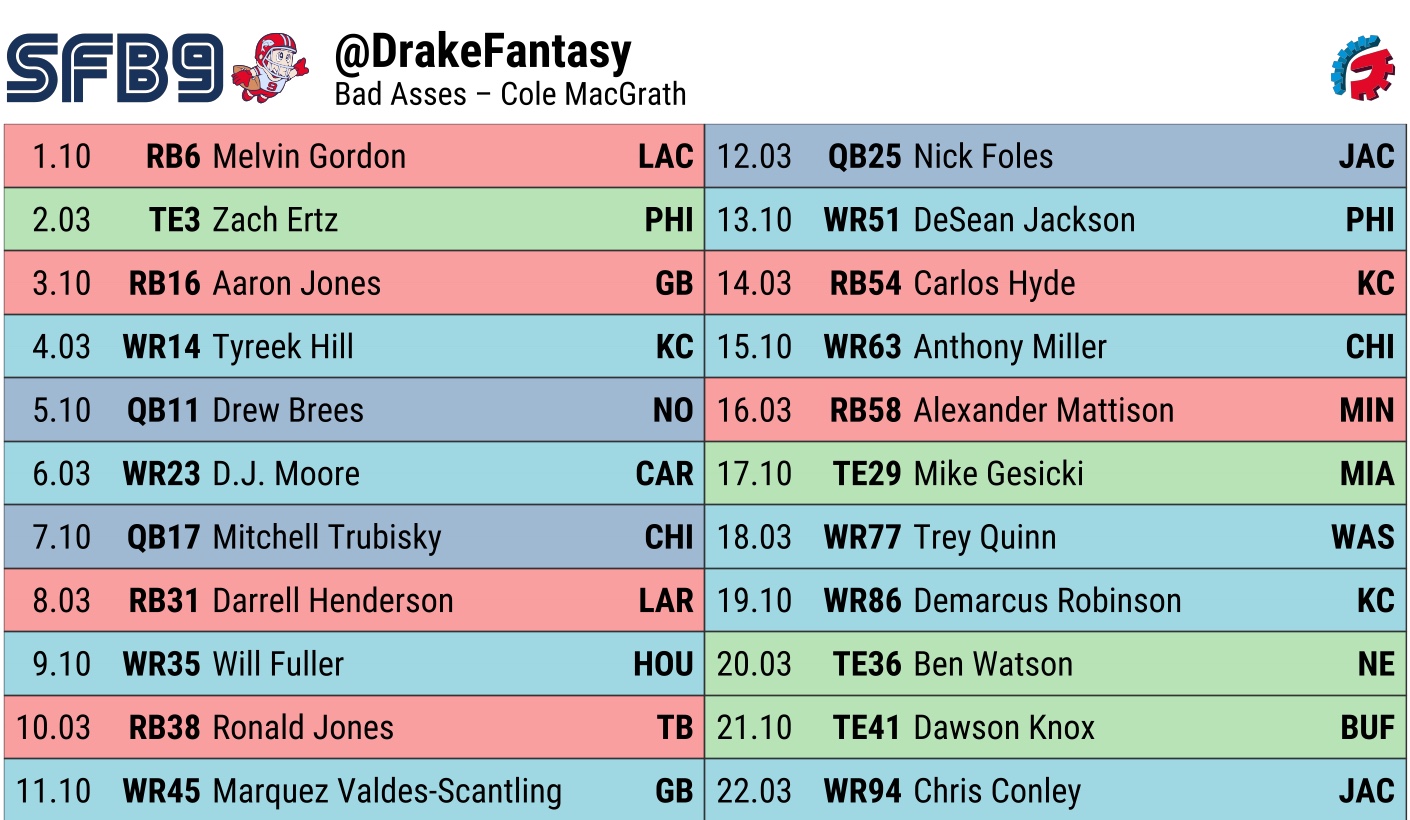