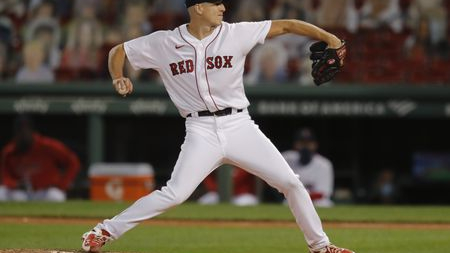 Should We Buyback Into Nick Pivetta?

Who doesn't like digging deep into the player pool? Sometimes I like digging into notable names that have the potential for deep league viability. In Nick Pivetta, we have a post, post, post, post-hype sleeper that's now on the Boston Red Sox. After a solid 2018 campaign, Pivetta struggled mightily. In the second half of 2019, the Phillies moved him into the bullpen. Pivetta started 2020 out of the bullpen, then the Red Sox acquired him in a trade and gave him a chance to start. We'll dig into Nick Pivetta's past seasons, his pitch mix, and see if we find any glimmers of hope for him moving forward. Hopefully, we'll help answer the question below - should we buyback into Nick Pivetta?

Should We Buyback into Nick Pivetta?

8 Ks through his first 5 innings.

On Baseball Savant, Nick Pivetta uses a four-pitch mix (four-seam, curve, slider, and changeup). He threw his slider (24.5%) and curveball (20%) relatively evenly. Pivetta barely used his changeup at 6.2%. FanGraphs lists Pivetta as using five to six pitches including a sinker and cutter. Regardless, he heavily relied on three pitches (four-seamer, curveball, slider).

As noted earlier, Pivetta's four-seamer stunk, but the breaking pitches performed decently. Given his heavy four-seamer usage, it's no surprise he finished with a brutal 2019 and 2020 season. The table below shows Pivetta's pitch mix and results on his top-3 most used pitches.

First, we'll break down his 2019 and 2020 into starting pitcher and relief appearances. Then we'll dig into the game logs.

Sometimes when pitchers head to the bullpen, we see the numbers improve. Unfortunately, the results weren't as positive as one would hope. Later on, we'll touch on the two starts with the Red Sox.

Digging Into the Game Logs

On the surface, outside of his breaking pitches, it's difficult to find any glimmers of hope. There's no way to slice it, but Pivetta struggled mightily outside of the final two starts in 2020. When digging into the game logs, we find a few solid starts by Pivetta.

He recorded a three-start stretch in 2019, where he totaled 21.2 innings, 5 ER, 2 BB, and 21 K. In those three starts, Pivetta lowered his four-seamer usage between 40-45.7%. He followed up those two starts with a similar usage on the four-seamer at 46.7% and 44.1% yet the results weren't the same. Unfortunately, he allowed ten earned runs and six walks with five strikeouts in 11 innings. Even though the results proved inconsistent, I think lowering the four-seamer usage is a smart move or at least adjusting the location.

In his final two starts of 2020 with the Red Sox, he performed well as seen in the table above. After digging into this, I noticed Jeff Zimmerman on FanGraphs noted Pivetta lowered the zone rate in those final two starts. Hopefully, that continues in 2021, especially since he could benefit from throwing pitches outside the zone a bit. In his final game with the Red Sox, Pivetta lowered his four-seam usage to 45.7% and kept up the usage of the breaking pitches. That's a good sign.

Nick Pivetta is getting ready for the 2021 season, he’s eyeing that 4-5 spot in the rotation. pic.twitter.com/M8eHVA3FF9

It begs the question of whether Pivetta should lower the four-seamer usage. I'd argue yes given he allowed a .453 wOBA on the four-seamer from 2019-2020. That's slightly better than the Pirates' young pitcher in Mitch Keller, who also threw the four-seam a ton (50.3%) yet yielded a .447 wOBA. It also doesn't help that Pivetta throws the sucker in the heart of the zone. That said, I decided to dig into the plate discipline by each pitch on FanGraphs to see if we found notable changes. 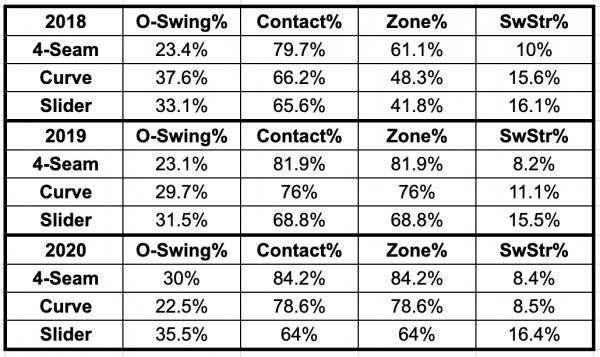 Outside of his best season in 2018, his curveball and slider performed worse across the board. He could benefit from lowering the zone rate on his four-seamer, while also lowering the zone rate on his curve and slider. That may help increase the chase rate that in turn could increase the swinging-strike and whiff rates. Pivetta's 2018 plate discipline blueprint looks much more appetizing.

The pitch arsenal and locations for Pivetta shown below give us an idea of how he located his pitches in 2020. Outside of his slider, the four-seamer and curve sit in the heart of the zone. It might help if he throws the four-seamer higher in the zone and lowers its usage.

Credit to Tate Schlichting for mentioning to me that he watched some of Pivetta's games from the Phillies and Red Sox. Tate noted a few tangible changes including a small tweak in Pivetta's mechanics. Based on Tate's observations and the Brooks Baseball data to back it up, it warrants further investigation with hopes of that continuing in 2021.

Overall, we need to monitor these changes early into the 2021 season. If these release points and movement changes stick, then I'd want to dive into the spin direction and such in 2021. Could these be intentional changes or suggestions from the Red Sox pitching coaches? Possibly a mix of both or at least it seems that way.

Sometimes I imagine an island of Nick Pivetta truthers, and I may or may not be sailing towards there since I still have hope. As mentioned earlier, he's a post, post, post-hype sleeper. After his breakout 2018 season, Pivetta hasn't lived up to the hype. Even in 2019, the Phillies sent him down and he performed well in Triple-A. Somewhat mixed results on Pivetta, but a few people responded considering similar pitch mix adjustments that should help him.

What do we think about Nick Pivetta? #FantasyBaseball

ATC projects Nick Pivetta for a 5.21 ERA and 1.43 WHIP with an 8.66 K/9 and 3.48 BB/9 in 94 innings. All that looks disgusting. Given the lack of depth in the Red Sox rotation, Pivetta should start in the rotation in 2021. However, he could lose his spot when Chris Sale returns or Tanner Houck earns a chance again. With an ADP after pick 450, he's unlikely to be drafted outside of best-ball formats. Don't forget about Pivetta because a pitch mix change plus adjusting his pitch location should help him out. Monitor the release point and pitch movement changes since they also provide reasons for optimism.

Should we buyback into Nick Pivetta? If these changes stick over the first few starts of the season, I'm ready to buy back in on him in 2021 assuming these adjustments elicit positive results.