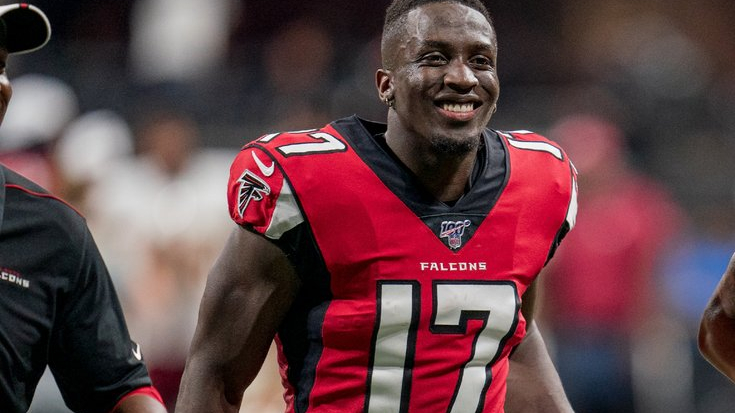 Should We Pick or Pass on Falcons Players Outside the Top-100 Picks in ADP?

As one of the offenses that involve question marks outside of the top-100 picks, not including Matt Ryan, the Falcons have a couple of pass-catchers in Russell Gage and Olamide Zaccheaus with some buzz. The Falcons have a new head coach in Arthur Smith that spent ten years with the Titans. We'll discuss the potential coaching impact when we analyze Hayden Hurst and the Titans level of 12-Personnel usage.

Some folks keep fading Mike Davis, given his age and lack of production outside of exciting waiver wire season last year. So next up in the backfield - Qadree Ollison. Is Ollison worth picking in redraft leagues? We'll also break down Gage and Zaccheaus with their potential fantasy viability. It's also necessary to touch on the forgotten one in Hayden Hurst with the likelihood of more 12-Personnel with Kyle Pitts moving around the field. Overall, the goal is to provide data on whether we should pick or pass on these Falcons players outside the top-100 in ADP.

Should We Pick or Pass on Falcons Players Outside the Top-100 Picks in ADP?

It seems like the fantasy community appears quite split on whether they should or shouldn't draft Mike Davis. After initial offseason research, Davis ended as a draft target of mine. However, some sharp fantasy analysts and players make me question my initial research. Davis qualifies as a big-gap running back with the Falcons' RB2 as Qadree Ollison with an ADP difference of 150 picks.

Several indications point towards Qadree Ollison over undrafted rookie Javian Hawkins, who seemed like a hot sleeper earlier in the offseason. Ollison lacked many opportunities or production during his two seasons in the league. However, he's a bigger-bodied back sitting at 6-foot-1 and 228-pounds, yet he lacks the size-adjusted speed with a 103.6 (76th-percentile) Speed Score.

In college, Ollison produced over 1,100 rushing yards twice during his freshman and senior season with a 26.3% (56th-percentile) College Dominator. We can't take much information from his first two seasons in the NFL with 60 total yards and four touchdowns. However, per Underdog ADP, Ollison goes outside the top 200 picks, which means fantasy managers haven't actively targeted him. In deep leagues, draft Ollison as one of your last-round picks if Mike Davis struggles or suffers an injury.

Unfortunately, explosive athlete Cordarrelle Patterson won't factor into our fantasy lives much other than as a nuisance. The receiver turned running back may spell Mike Davis at times, but if Davis struggles or suffers an injury, the grinder-type running back involves Qadree Ollison.

Undrafted rookie out of Louisville Javian Hawkins received some buzz in the offseason. Hawkins profiles as a slighter frame at 5-foot-9 and 183-pounds with a couple of productive seasons in 2019 and 2020. In 2019, Hawkins totaled 264 carries for 1,525 rushing yards. Then in 2020, Hawkins rushed for 822 yards on 133 carries. Throughout his career, Hawkins garnered a 70% rushing market share per RotoViz. A couple of recent running backs with player comparisons using the RotoViz Prospect Box Score Scouting Tool include Justice Hill and Michael Warren II. 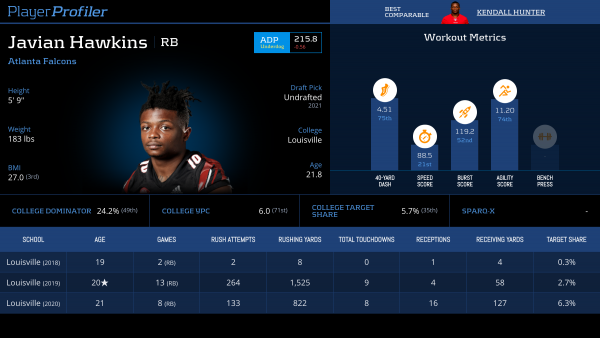 As a small back, Javian Hawkins flashed some speed with his 4.51 (75th-percentile) 40-yard dash yet lacked the size-adjusted speed with an 88.5 (21st-percentile) Speed Score. Outside of some straight-line speed, Hawkins ranked in the 74th-percentile with an 11.20 Agility Score, which indicates he possesses short-area quickness with the ability to evade tackles.

He could earn some pass-catching opportunities since he had similar workout profiles as Phillip Lindsay, Tarik Cohen, and Darren Sproles though all three boasted faster 40-yard times. We used the RotoViz Prospect Workout Explorer to identify similar comparisons based on their workout metrics. Just remember Hawkins if his name pops up in any waiver wire articles throughout the season.

With Julio Jones out of town, which Falcons receiver should we target after Calvin Ridley? The ADP market indicates it's Kyle Pitts, an elite athlete and polarizing player with athleticism comparisons to Noah Fant. Some think Pitts will break the tight end position landscape during his rookie season, but we could still find valuable pieces in the Falcons' receiver room. 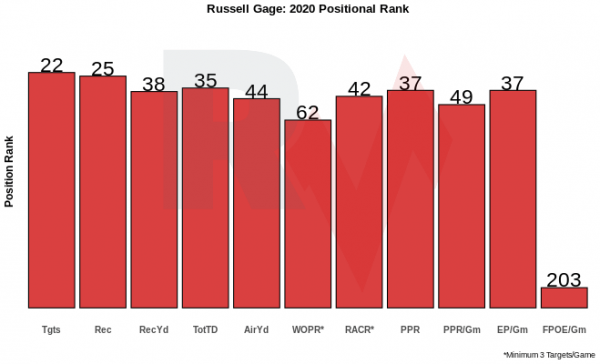 Russell Gage profiles like a possession-type receiver that hauled in 72 (No. 26) receptions for 786 (No. 38) receiving yards last year. With Gage's low 8.62 (No. 84) Average Target Distance, he earned a low 18.2% (No. 51) target share and 17.8% (No. 78) Air Yards Share. Granted that, opportunities remained limited, with Julio Jones and Calvin Ridley commanding the attention with the third most Team Pass Plays Per Game at 41.8. 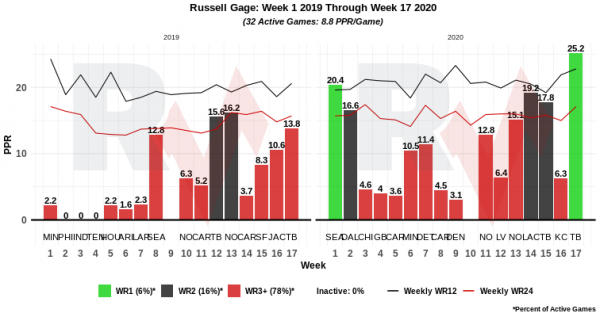 On Underdog, Gage's ADP as WR53 sits right outside the top-100 picks. Some receivers going in the same area on Underdog include Marquise Brown, Michael Pittman, Marvin Jones, and DeVante Parker.

In FFPC leagues, Gage's ADP of WR54 and 128 overall looks like a solid range. Nyheim Hines, Henry Ruggs, and Devin Singletary look like a few other intriguing players going near Gage in FFPC leagues. However, during home league drafts, keep in mind that Gage may go even later if some league-mates aren't familiar with him. Overall, Gage profiles as a low-upside receiver with a potential safe floor for five receptions for 50 yards each week. 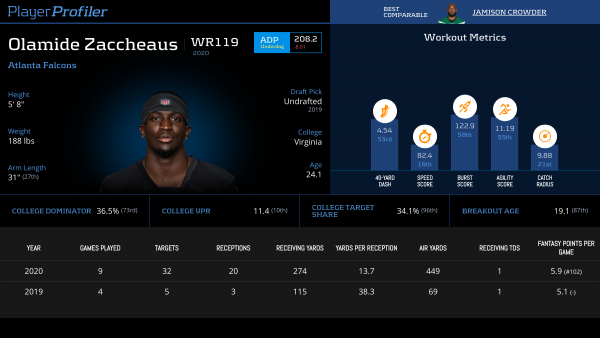 Outside of two games last season where Zaccheaus hauled in eight of 12 targets for 189 receiving yards, he only totaled 85 yards in seven other games. In one of those weeks, Jaire Alexander of the Packers shut down Calvin Ridley for zeros on five targets. Then, in Week 9, Ridley missed the game with a foot issue.

However, Julio Jones played in both contests where Zaccheaus went off, so he likely took advantage of his matchups and opportunities in Week 4 and 9. Unfortunately, Zaccheaus didn't qualify for any efficiency or opportunity metrics since he received only 32 (No. 114) targets. With an ADP outside of the top-200 picks on Underdog as WR92, Zaccheaus looks more like a deep-league draft target or left for the waiver wire. However, we have a small glimmer of optimism during two games last year.

With Arthur Smith as the Falcons' new head coach, we can't finish this sucker off without talking about the second tight end on this offense in Hayden Hurst. Before 2019 and 2020, when Smith served as the Titans' Offensive Coordinator, he coached the Titans' tight ends in some capacity from 2013-2018.

What's all this mean? It's likely the Falcons move to 12-Personnel more often in 2021, given the tendencies under Arthur Smith. Rightfully so, everyone in the community keeps talking about Kyle Pitts and whether he'll boom or bust as a rookie. Pitts presents massive upside at the position with some risk as a top-50 pick. Hayden Hurst may have some fantasy viability or potentially more real-life viability if he's often on the field with Pitts. 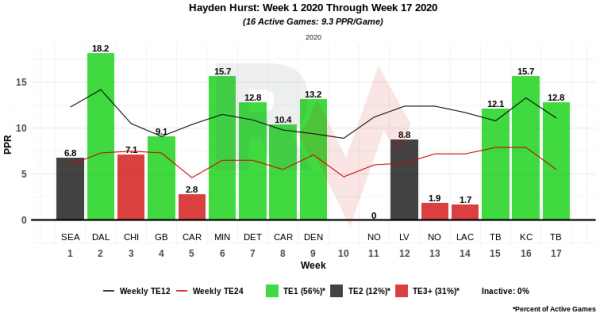 Russell Gage and Qadree Ollison look like the most actionable players to draft in 12-team redraft leagues with 180 to 200 players picked. In deeper leagues, consider Olamide Zaccheaus and Hayden Hurst, but don't reach for either pass-catchers given their low floors. Gage should provide the "boring" PPR floor of five receptions for 50 receiving yards. Meanwhile, Ollison looks like the primary RB2 on the Falcons' running back with a large gap between Mike Davis. Zaccheaus and Hurst remain the wild cards, and we'll monitor Hurst's snap share and early season opportunities with Arthur Smith as the head coach with the heavy 12-Personnel with the Titans.

If Arthur Smith instills an offensive system and philosophy that leads to more efficiency, then that will help all Falcons pass-catchers. Often efficient receivers pair with efficient quarterbacks. In 2019, Ryan Tannehill ranked 1st with a 54.9 Production Premium and then 1st again in 2020 with a 29.4 Production Premium. Meanwhile, Tannehill averaged an 8.3 (No. 4) Adjusted Yards Per Attempt last season compared to 9.1 (No. 1) AY/A in 2019. Often some of the best fantasy quarterbacks rank highly in Adjusted Yards Per Attempt.