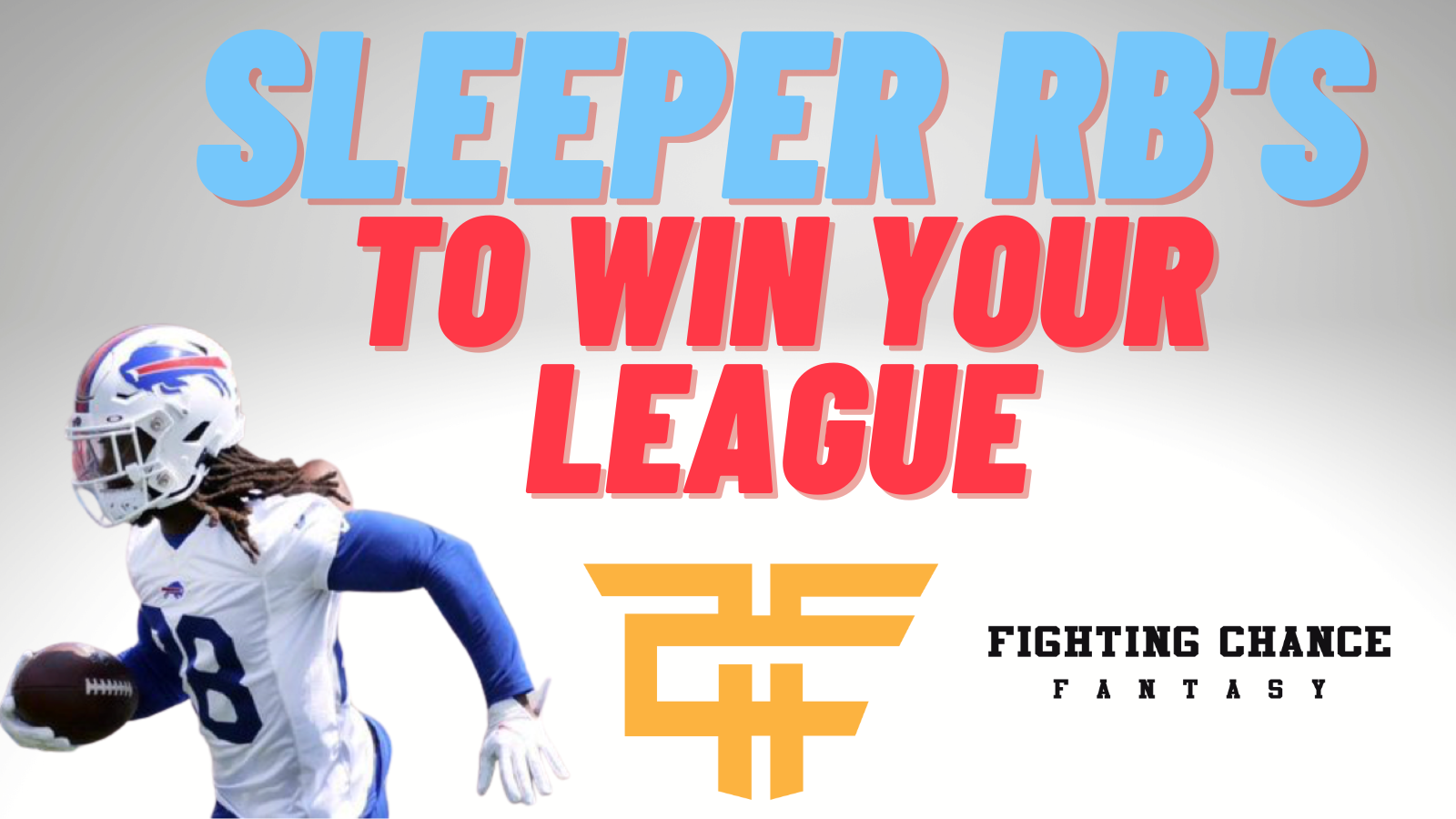 The most asked question this time of the year is, “give me a running back sleeper.”  I hear it every time I talk to someone about fantasy football.  Running back is the most volatile position in the game.  The injury rate is higher than other positions and likely managers in your league are hoarding backups on their bench like they are the last beers at a bachelor party.

Here are running backs to target in your upcoming fantasy football drafts with an average draft position (ADP) over 100 – which is 9th round and later in 12 team leagues (according to Fantasy Pros).

Rhamondre Stevenson (Patriots, ADP 108) – We saw flashes of brilliance during his rookie season, including two 100-yard rushing games.  His five touchdowns pale in comparison to his backfield mate Damien Harris who crossed the goal line 15 times.  But this bet is on Stevenson gaining the Patriots' pass-catching role.  James White (only 14 targets last year) is still not practicing following offseason hip surgery.  Last year the Patriots backfield target leader was longtime special teamer Brandon Bolden (49).  If Stevenson can claim the work on 3rd downs his value could skyrocket.  Already in camp, there are reports that he’s slimmed down 7 pounds and is working in with the first team offense.  Then again, we’re dealing with a Matt Patricia-led offense.  Bill Belichick has already told us what he thinks of fantasy football.

James Cook (Bills, ADP 112) – The Bills spent their offseason telling us they wanted a pass-catching back.  They were rumored to have tried to trade for Christian McCaffery.  They signed, then lost J.D. McKissic.  They finally landed their man in round two of this year's NFL Draft with 5’11 Georgia Bulldog James Cook.  The brother of Vikings super stud Dalvin, James enters the league as an exceptional pass catcher.  During his Senior year at Georgia, he collected 27 passes for 284 yards and 4 touchdowns in a split backfield with Raiders draft pick Zamir White.  Cook looks to be the missing piece in a Bills offense that should once again be top 10 in pass attempts.  In 2021 Devin Singletary and Zack Moss combined for 82 targets which resulted in 425 yards and 2 touchdowns.  The draft capital spent on Cook says that Buffalo believes he can take that role and annihilate those numbers.  There is no risk drafting Cook at RB 39.  The Bills are telling you the answers to the test here.  Buy the upside! 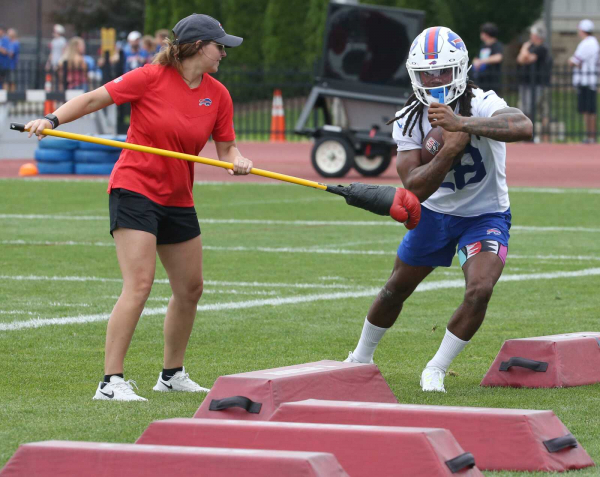 Rookie James Cook getting in work at Bills camp.

Nyheim Hines (Colts, ADP 124) – Everyone knows the Colts RB to draft is Jonathan Taylor, right?  Well not everyone is going to have a chance at the first pick in the draft.  You will have a shot at Hines in the 11th round.  Hines’ 2021 wasn’t anything to write home about.  Between Carson Wentz’s play and the emergence of JT, Hines saw a career low in targets.  That looks to change in 2022 as Matt Ryan comes to Indy sporting the most targets to running backs in the league last season.  Ryan won’t look to scramble like Wentz did, nor will he hold the ball and take a sack.  Hines was a PPR machine two seasons ago when he caught 63 passes en route to a top 20 RB season.  Colts Head Coach Frank Reich is on record saying Hines is due for a big season.

1) Alec Pierce is gonna be in the mix at WR. Really good complement to Michael Pittman—a little longer, lankier, faster than the physical MP.

2) Nyheim Hines is gonna get the ball more. He'll be used to spell Taylor, but also WITH Taylor (maybe in the slot).

Dameon Pierce (Texans, ADP 142) – Now we’re talking sleepers.  My bet is more than half of your home league has no idea who Dameon Pierce is.  There has been a constant drumbeat all training camp for Pierce, a 4th round rookie from Florida.  Now let’s be real here, this is the Texans, and they stink.  But, we are in the business of adding players who can earn high leverage touches and Pierce fits that mold.  He’s a shifty runner who can catch the ball when asked (11.4 yards per reception in 2021).  Pierce has a nose for the endzone, 16 touchdowns on just 119 touches in his Senior season.  Now we just have to hope the Texans' offense can get him in a position to score at the NFL level.  His main competitors are Marlon Mack (1-year deal) and Rex Burkhead (zero juice).  Take a shot on Pierce and if you miss on him, Marlon Mack should be available a round or two later.  Draft one of these Houston backs and see who rises to the top.

We pause this Texans breakdown for your daily Dameon Pierece reminder

Pierce will be household name in 2022

Kenny Gainwell (Eagles, ADP 160) – You remember Kenny Gainwell from last season.  He popped up on your waiver wire after finding the end zone in week 1.  His 2021 was uneven, to say the least.  From games with double-digit carries to being lost behind Boston Scott, he was an enigma to fantasy managers.  Now in 2022, he enters camp as something of a 1B to Miles Sanders.  Reports out of Philly say Gainwell is being used much more out of the backfield as a receiver.  Make no mistake, Miles Sanders is the starter for the Birds, but Gainwell absolutely has a role.  He has better hands than Sanders (PFF receiving grade of 73.6, which led all PHI backs).  Gainwell also has proven himself as a capable goal line back (5 rushing TDs).  The issue you’ll have with Gainwell is that unless Sanders gets hurt, he will always see less than 40% of the snaps.  He also must deal with Jalen Hurts potentially stealing goal line work (10 rush TDs).  What you’re betting on here with Gainwell is an explosive athlete in a good offense.  That’s the secret sauce to fantasy football. 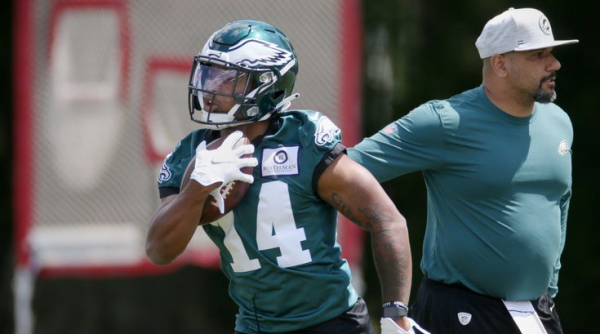 Tyler Allgeier (Falcons, ADP 162) – Someone has to take the between the tackles carries off Cordarrelle Patterson’s plate and that man is Tyler Allgeier.  A bruising 5’11 220lb 5th round selection from BYU, Allgeier totaled 1800 scrimmage yards as a Senior.  His 23 rushing touchdowns in 2021 won’t go unnoticed by play caller Arthur Smith who oh by the way called plays for Derrick Henry during his best fantasy seasons.  Smith’s two years as Titans OC both ended with his offenses finishing top 10 in rushing attempts and top 3 in rush yards.  Last year’s Falcons offense that finished 29th in rush attempts was due more to poor game scripts and a lack of talent.  Allgeier looks to change all that.  Draft him as your RB 4 and watch as he becomes a serviceable back as this young Falcons attack matures. 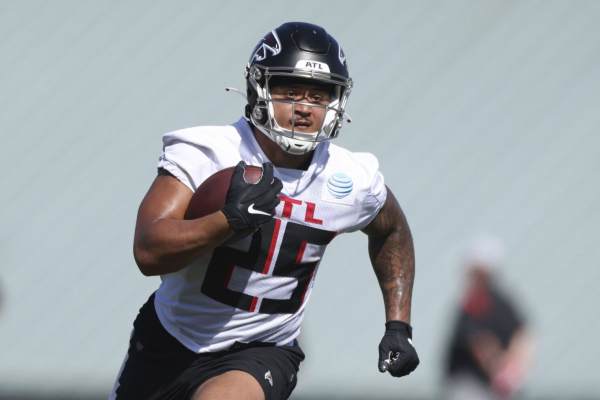 Rookie Tyler Allgeier is a bowling ball coming at defenders.

OK, now for some quick hitters…

Kenyan Drake (Raiders, ADP 192) / Zamir White (Raiders, ADP 232) – We know the Raiders are moving to a Patriots-type scheme under new coach Josh McDaniels.  One of these two players could land that “James White role” and see 75+ targets.  Both cost next to nothing in drafts.

Tyrion Davis – Price (49ers, ADP 204) – Powerful, decisive, instinctive.  All terms used to describe TDP who has the chance to shine in Kyle Shanahan’s offense.  The 49ers have had five different leading rushers over the past five years.  They’ve had top five offenses the past three years.  Do the math.  Draft Davis-Price late.

Isaiah Pacheco (Chiefs, ADP 200+) – Here’s a league-winning type pick.  A kid who runs 4.37 in the forty, can catch the football and plays for Andy Reid.  He’s going to need to supplant Clyde Edwards-Helaire, but with the work CEH has on tape, is the going to be too hard?

Ty Montgomery (Patriots, ADP 200+) - News out of Patriots camp is Montgomery has a shot at making the team.  If he does and Rhamondre Stevenson doesn't hold down the passing game work, Monty could be a super sleeper.