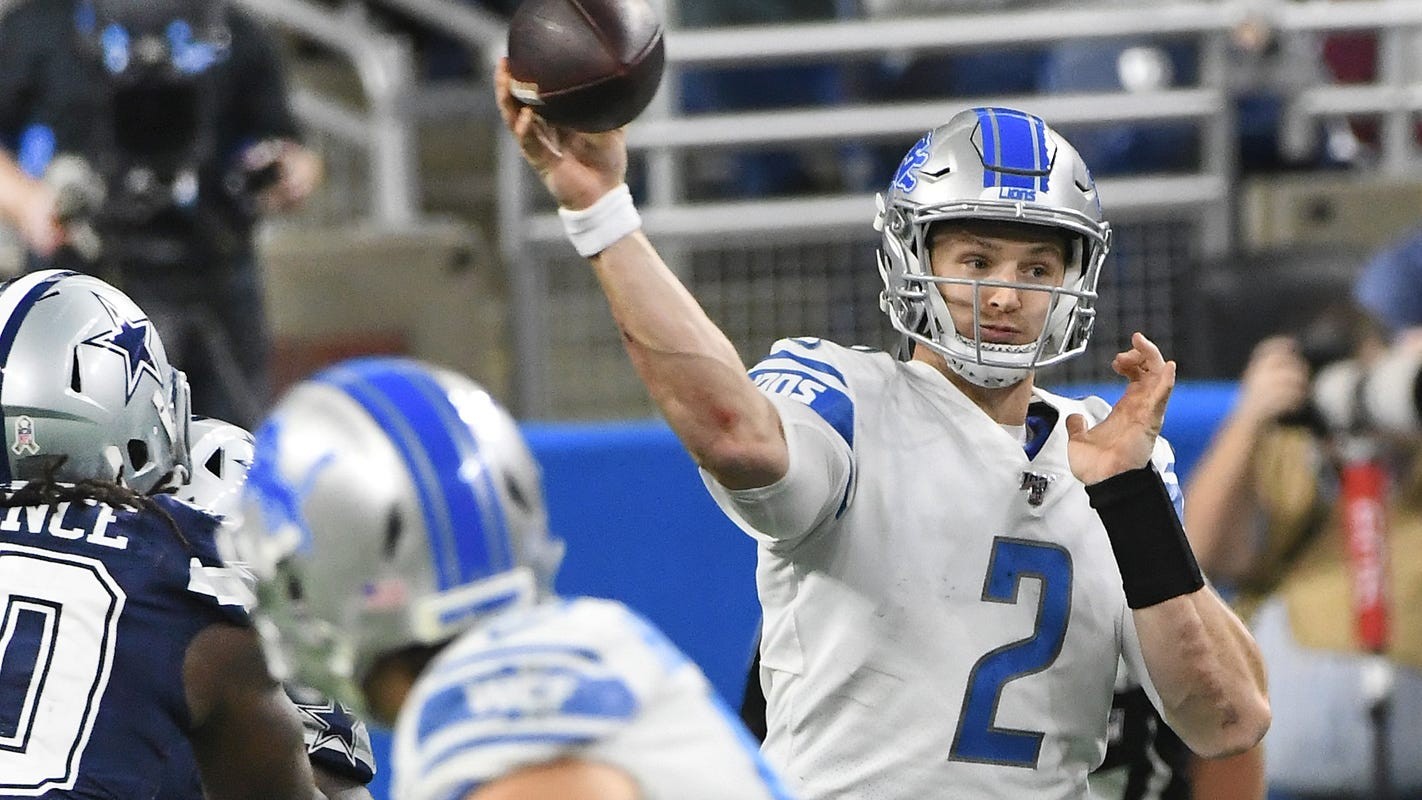 Last year at this time, I was touting quarterbacks like Andy Dalton, Marcus Mariota, Blake Bortles, and Eli Manning as streamers. How times change. Never fret as there is a new crop of players worth starting for a week, either to use as a bye week replacement or if you chose to drop Philip Rivers (he also has a bye this week, but I would not recommend you start him if he was playing).

For week 12, I am providing you with three players whom I believe are stream-worthy. They may be a wee bit scary to place in your starting roster, but given the fact that numerous quarterbacks are either on bye, have been benched, or are hurt, you may be in frantic need of a replacement.

These gridironers listed below are available in 50% or more of both ESPN and Yahoo leagues (alright, I am cheating a little this week. One quarterback is owned in more than 50% of Yahoo leagues, but just barely).

Have you been disappointed in Baker Mayfield this season? We all have at one point or another, but he has been doing admirably as of late. His fantasy showing last week was his second greatest of the season. Mayfield has not hurled an interception over his latest three games. He has also launched multiple scores in the last two weeks, and those teams were more solid than who he takes on this week.

This contest, Mayfield has a mouthwatering matchup facing the floundering Miami Dolphins. The Dolphins have provided the seventh-most fantasy points to field generals this season, so Mayfield should have a fabulous game. The Dolphins defense is beaten up, so this gives Mayfield an even bigger bump.

Odell Beckham Jr. is finally starting to come into his own and click with Mayfield. The wideout has had double-digit targets in the previous two games of the year, and Mayfield needs to continue targeting the athletic player. If he can get the ball to Beckham, Mayfield will have an impressive outing.

In case you are wanting to grab a player that can also be used in your roster for upcoming weeks, Mayfield seems to be that man. In week 14, he will go up against a weak Cincinnati roster. Come week 15, Mayfield will try to dominate Arizona. Mayfield could be an attractive get for your playoff roster.

It has been a rollercoaster with Sam Darnold this season. People have been high on him and then low on him. Now is the time to be high on him again. He is no longer pulling the Sixth Sense and seeing ghosts, so you can feel assured plugging him into your starting roster this week.

Last week, Darnold met the less than stellar Washington Redskins and was able to deliver four touchdown passes. He also launched for 293 yards while only having one pick. Darnold additionally proceeded to complete 19 of the 30 passes he tossed. He has been excellent as of late, throwing for a total of 783 yards and six touchdowns in his latest three starts. The quarterback of the Jets completed 65 of 95 passes in that span while tossing two interceptions.

In the future contest, Darnold is facing an Oakland Raiders defense that has its holes. The Jets will be playing at home, and that means the Raiders are having to travel from the west coast over to the east coast. This should be advantageous for the Jets. Quarterback play versus the Oakland defense has been superb this year, so keep an eye on Darnold to continue this trend.

Jamison Crowder has been a solid wide receiver and target for Darnold, and the quarterback also has Ryan Griffin at tight end. I spoke about Griffin in my tight end streaming article, and this is because he is a safe target for Darnold.

The New York Jets love to be pass-oriented when it comes to the red zone, so watch for Darnold to do a lot of hurling the ball. Darnold additionally has an outstanding playoff schedule, and he gets to take on both Cincinnati and Miami in the forthcoming weeks. This may cause you to retain him on your roster.

Jeff Driskel is going to be one of those people readily available if you demand a streamer at the QB position this upcoming match. He will be facing a Washington defense that has been despicable, letting Sam Darnold toss four touchdowns in the prior outing. The Redskins will allow teams to drive on them, placing an abysmal 16th air yards.

Driskel is fancy on his feet. He can punish teams with his feet if need be. This season, he has succeeded in gaining first downs on six different occasions. Remember, he is replacing the injured Matthew Stafford, so he has not even played the complete season.

Even though he is not the most solid quarterback by a longshot, he did manage to look effective in his two games. At Chicago, he put up 18 points in ESPN leagues while tallying 27.5 points in the same setting versus Dallas. He has seemed more efficient than Philip Rivers in that span.

Driskel is not going to be a long-term answer by any means, but he does have a juicy matchup in the 12th week of the season. If he can get Kenny Golladay involved and make sure to lean on Marvin Jones Jr. more, he seems like he can defeat the Washington defense. Proceed with caution, but do know that he is a nice play this week.

There are a few other alternatives out there that could be available in your league if you need a streamer. Jacoby Brissett (IND), Dwayne Haskins (WAS), Nick Foles (JAC), and Mason Rudolph (PIT) are all players I would take into consideration. If I had to go with one of these athletes, Brissett would be the best bet.

Remember to give me a follow over on twitter @thekaceykasem. Let’s chat about football… and dogs, music, etc.