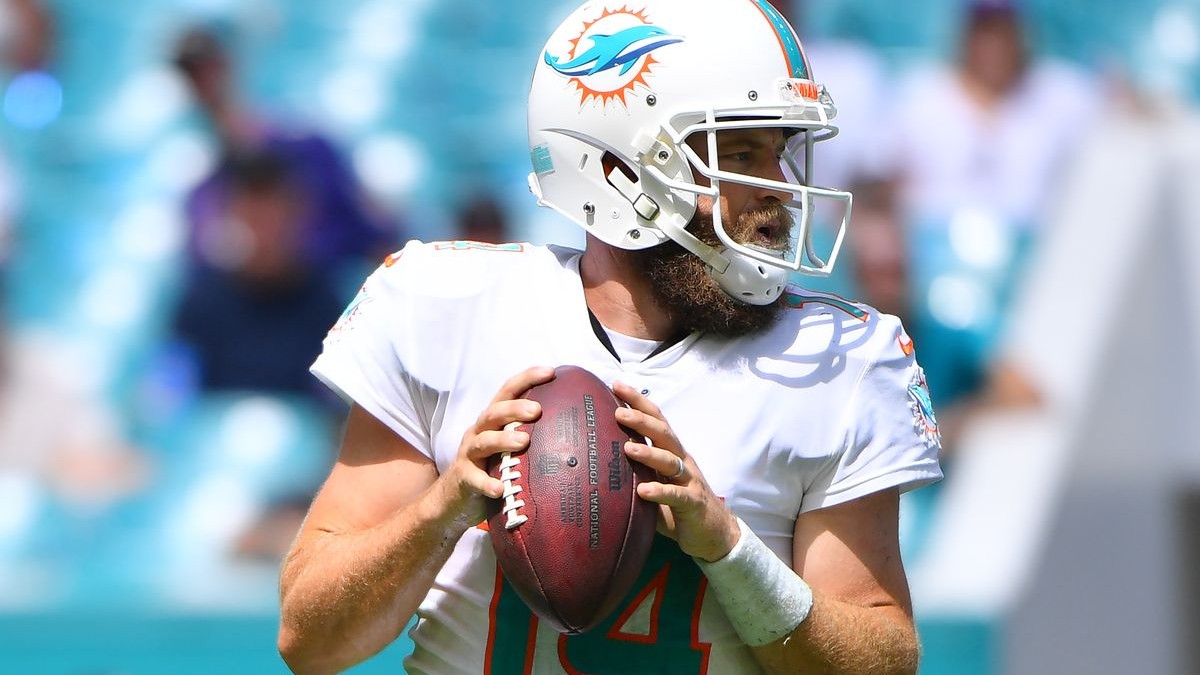 So here we are, week 14 of the NFL season. Your season may be on the line this week, and you could be wishing to inject life into your roster by picking up a streaming quarterback. Not all quarterbacks have been playing up to par (or even consistently), so streaming might be a benefit this time around. Below, I will be posting three quarterbacks that are readily obtainable in both ESPN and Yahoo fantasy leagues (50% ownership or below).

Can you trust Ryan Tannehill after his average performance in week 13? The answer is yes, and you should feel confident firing him up this week when he gets the Raiders in Oakland. In week 13, Tannehill was competing against a rather satisfactory Indianapolis Colts defense. He still produced 13.8 points, so the day was not entirely lost, even if it appeared like it.

This contest, he is matched with a Raiders defense that has provided a whopping 28 passing touchdowns to quarterbacks this season. Not only that, but they have also given up 20 or more points a week to the quarterback position this year. Oakland has not looked right on the defensive side of the ball this season, conceding the third-most fantasy points to quarterbacks they face.

Tannehill should have a bounce-back match this week in Oakland. He is quite effective when it comes to throwing deep passes, something the Raiders have a difficult time defending. Tannehill will try to get back on track and resemble the player he was in the five games before week 13.

It seems like Fitzmagic makes an appearance on these streaming features each season, so here he is popping up on the list for week 14. Ryan Fitzpatrick has ultimately found that magic he brings, just later in the season than he usually does. In his last two competitions, he has seen a magical 25 points or more for fantasy purposes. On top of that, he has been delivering the ball numerous times in the last three games. The big man has tossed 41 attempts over that span.

The running game in Miami has not been ideal, so Fitzpatrick is frequently required to throw the ball. This is advantageous to his fantasy numbers. This week, the Miami Dolphins find themselves facing a New York Jets defense that is banged up. After the game versus the Cincinnati Bengals in week 13, safety Jamal Adams was spotted in a walking boot while cornerback Arthur Maulet was also hurt. The back up for Adams, Matthias Farley, is a hapless defender. This should help Fitzpatrick’s passing numbers.

The Jets just gave the Bengals their first win of the season, while the Dolphins showed the Philidelphia Eagles they were capable of coming to play. Watch for the Dolphins to take this momentum into week 14. Fitzpatrick should have yet another big showing.

Andy Dalton is back, and he is a prime candidate for streaming in the forthcoming week. Following the week 8 loss, the Bengals chose to sit Dalton as their starter. Dalton was not the issue in Cincinnati, so they are going back to the well. He looks to be an ideal start this week.

Dalton might not seem like the greatest quarterback out there, but he has been suitable from the fantasy football viewpoint. In six of the eight contests that Dalton has started, he achieved 17 or more points. He was not starting in week 13, but he did take over for Ryan Finley, guiding his team to their first victory. Facing the Jets in week 13, Dalton threw 37 passes and completed 22 of them. Dalton flung a touchdown in that game as well, setting a franchise record for most touchdown passes by a Bengals quarterback.

The second-round draft pick brings his confidence into week 14 when the Bengals meet the Cleveland Browns. The Browns are conceding the 14th most fantasy to quarterbacks this season, so Dalton has a shot at getting those valuable fantasy points. He is a fine play if you are in a jam this contest.

Other quarterbacks to keep on your radar are Jacoby Brissett (IND), Kyle Allen (CAR), and David Blough (DET).