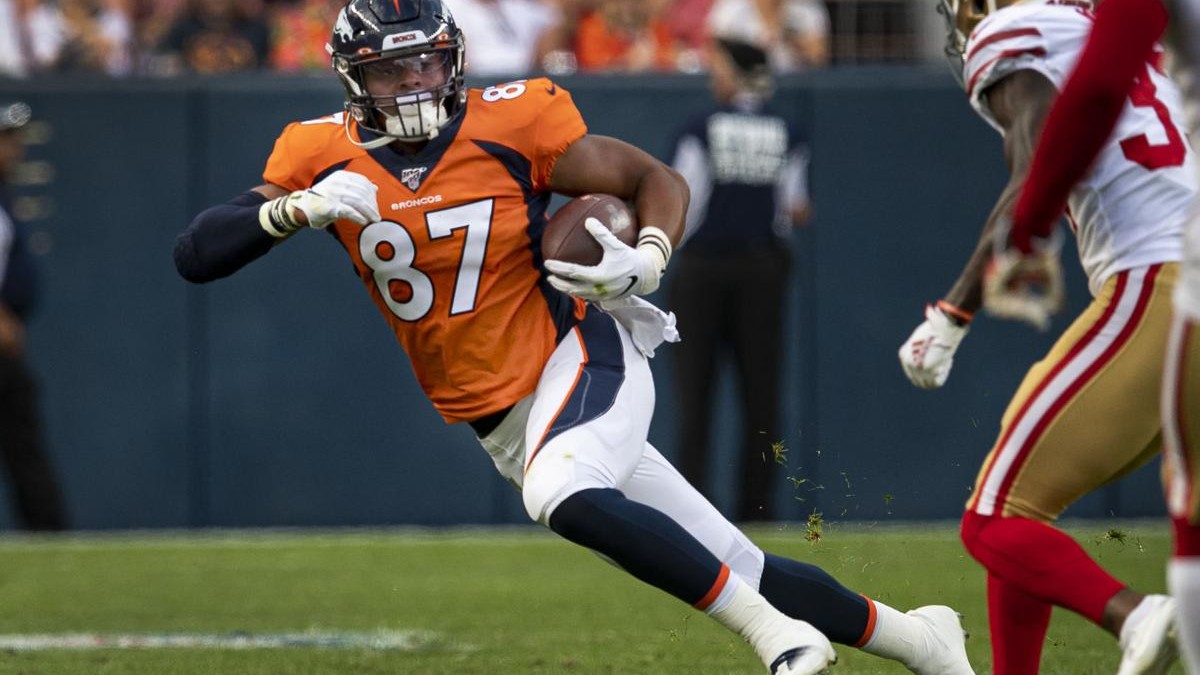 As we prepare for the upcoming Thanksgiving, we must ask ourselves one vital question --- is it more difficult to spend time with in-laws or find a streaming tight end? In my opinion, it is pretty dang close. There just are not a ton of streaming options out there. The tight ends began acting like tight ends of yesteryears. We had our hopes up at the start of the season because tight ends were scoring loads of fantasy points, but as of late the points have started to dry up.

One lucky thing for us this week is that there is no bye week. That means most tight ends are at your disposal. The difficult part is figuring out just who needs to be started to get you those coveted fantasy points. Below, I am outlining three tight end prospects widely available on waivers (50% or less ownership in both ESPN and Yahoo leagues).

I am seriously flabbergasted that Ryan Griffin is available in numerous leagues. He’s a starting tight end who is an enormous target for quarterback Sam Darnold. If you are struggling at tight end, Griffin might be your savior.

Griffin has a large snap rate. He has been in on 88% of the New York Jets’ offensive snaps. That is an especially high snap rate for the tight end spot. He has achieved the NFL’s fourth-highest snap share at his position. This is notably hard to come by, and you can find it easily on waivers.

In the last five weeks Griffin has played, he has accumulated four touchdowns. Not only that, but he is sixth overall in fantasy football scoring for the tight end position since the eight week of the 2019 season.

Griffin should fair strongly this week when competing against the Cincinnati Bengals. That defense is providing the third-highest rate of yards per catch to tight ends they face. The Jets game script last week was not one that benefited Griffin as New York had a massive lead and ran the ball more than throwing it. This week, look for Griffin to continue his progress in the red zone. He is constantly thrown to in the red zone, so those huge plays can help your fantasy team prosper.

The Denver Broncos tight end whom I was touting at the beginning of the season has been a target monster at the tight end position over the latest four games. He achieved seven targets a game on average over that stretch. The Broncos have not seemed good on offense, to say the least, but the silver lining is that Fant has seen 24% of their total targets since the eighth week of this football season. Remember that Emmanuel Sanders trade? This benefited the share of targets coming Fant’s way.

The 2019 first-round draft pick (and rightly so) has the dominate play upside to make your team excel. In the last three games of Fant’s season, he has seen three of his receptions go for 20-yards or more (do you hear that, Jason Witten). Over that time, Fant also took it to the house with a 75-yard touchdown grab.

As previously stated, his target percentage is starting to shape up. Even with lousy quarterback play by both Joe Flacco and Brandon Allen, he has still managed to make something out of nothing. In his last two weeks, the athletic tight end has ten targets in the eleventh week while seeing five in week 12. He is one of those “hit or miss” type of guys that can be scary, but all he needs is one tremendous play to get you fantasy points. The thing is, he can do it on a constant basis, so have faith this will happen yet again when the Broncos take on the floundering Los Angeles Chargers.

You might be living under a rock, so let me set the scene for you. A man has two ankles, but both of them decide to get injured. That man is Indianapolis Colts tight end Eric Ebron. You probably thought I was going to tell a joke there, but sadly this is a reality. The big man has been placed on Injured Reserve. Jack Doyle is next man up, so here he is to the rescue. If you need a tight end, notably as an Ebron owner, now is your chance to scoop up Doyle.

Doyle has been fantasy relevant in the past, and there is no reason he cannot be fantasy relevant again. Ebron checks onto the IR list with 52 targets. Those targets have to go somewhere, right? Why not get them to a tight end who has had 12 percent of the target share this season (yep, we are talking about Doyle).

Doyle and Ebron have been quite similar this season. Ebron has a tally of 34.1 receiving yards per game to Doyle’s 27.6. Both of these tight ends have scored three times this year. Ebron had a 15% target share, so it makes sense that Doyle would benefit from his injury.

This week, the Indianapolis Colts battle a Tennessee Titans team with a defense that has not been stellar against tight ends this season. Currently, the Titans are conceding the 11th most fantasy points to tight ends. This will be beneficial for Doyle who has not been as productive as one would like this season. He should have a safe game facing the Titans defense.