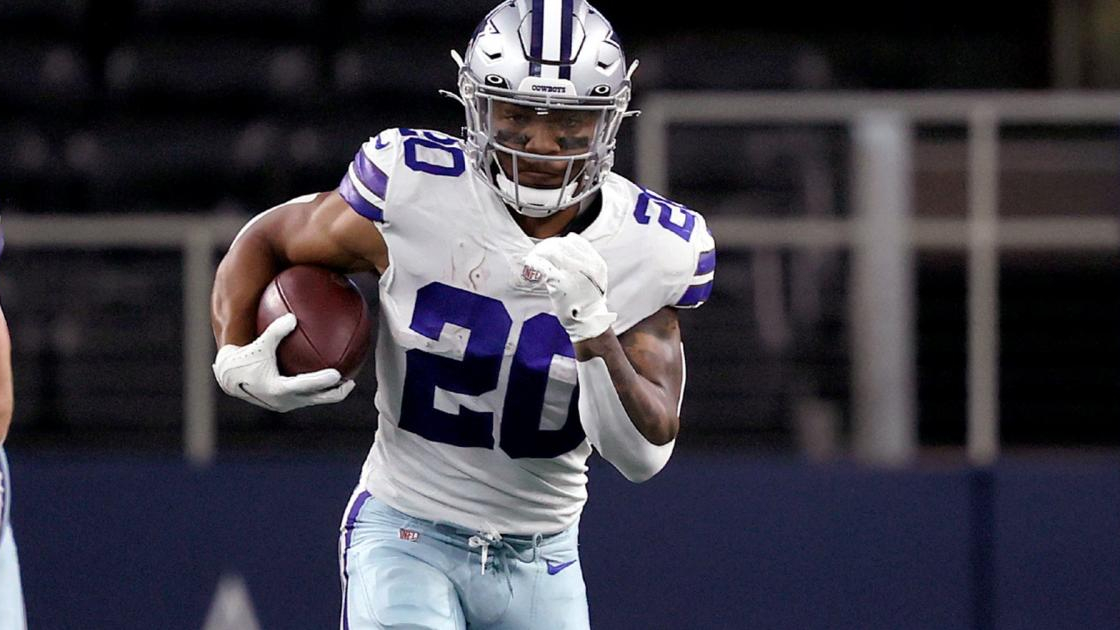 It's December, the holiday bells are ringing and the playoffs are dead ahead! Let's get those wins this week! Remember, you're starting your studs no matter what. Don't get cute by sitting them over the players you see here.  This article focuses on who we feel can give you an edge this week.

Jared Goff is a Jekyl/Hyde quarterback with his home and road splits this year. Goff sure loves that home cookin', and the Jaguars give up the sixth most fantasy points to quarterbacks. In yet another potential offensive shootout under the dome, look for Goff to shine. - Matt Miles @DirtyAirFC

This Jaguars versus Lions game has the oddsmakers predicting a shootout with an over/under of 51 for the point total. Trevor Lawrence is starting to get back on track by throwing for 580 yards and five touchdowns over his last two contests. Additionally, the Lions are allowing the most fantasy points to quarterbacks this season, and that makes Lawrence a start for me this week. - Leo G. @smooth1074

Pete Carroll is known for getting conservative when things look good for his teams.  The Seahawks are one game out of a wild card slot and travel to Los Angeles to face the sinking Rams, with one of the lowest implied totals of 16.75 points this week. I'm staying away from Geno Smith this week. - Matt

This was the Seahawks' final offensive play. A field goal wins it at this point. Travis Homer was open in the flat. Pete Carroll said they missed a chip block on Maxx Crosby that RT Abe Lucas and Geno Smith were expecting.

"We were there to chip him and we didn’t get it done." pic.twitter.com/5sPDtjuaz7

It’s tough putting Tua Tagovailoa on the sit list because he and the Dolphins’ offense have been so awesome this year, but so has the 49ers’ Defense. There have been only been two quarterbacks to score over 20 fantasy points against the Niner defense this season, Patrick Mahomes and Marcus Mariota's three total touchdown performances. That’s it! This will really be a true test for Tagovailoa and the gang to show the world their here to play. So start him if you must but be cautious of the outcome, because it may not be pretty. - Leo

Jacksonville Jaguars received their charter 29 years ago and the NFL's third Florida Franchise has one of the best-kept WR secrets in the NFL.  Zay Jones, touted this summer by Fighting Chance Fantasy's own Brian Drake, Jones has been a solid WR2, that is looking like he might have the ceiling of a WR1.  With Trevor Lawrence getting better with each game, look for Jones to keep producing. -Matt

Jamal Agnew has a pair of TDs for Jacksonville.

Those are Zay Jones' snaps. He was inactive today.
Jones has a 23% target share for the year. If he's on your waiver wire - ADD HIM.#fantasyfootball #NFL #Jaguars

What a difference a quarterback change can make on the offense. With Zach Wilson behind center, the Jets were constantly sputtering around never letting these offensive weapons grow. But one game with Mike White at the helm of the Jets' offense looked for real. Garret Wilson was one of the beneficiaries of the change as he was targeted eight times and produced five receptions for 95 yards and two touchdowns. Hell, White even made Elijah Moore fantasy relevant for the first time this year. The Jets may have to air it out if their defense can’t control the high-octane Vikings' offense in order to try and keep up with them. The Vikings are allowing the fifth-most fantasy points to wide receivers this year making Wilson a must-start in Week 13. - Leo

The Jets rookie WR is a PROBLEM against man 👀 pic.twitter.com/C6rMQDNe25

Usage doesn't always beget fantasy points. This week's case study is on Devin Duvernay, Tylan Wallace, and Demarcus Robinson. Lamar Jackson has been figured out by defensive coordinators, and without Rashod Batemen and Hollywood Brown, Jackson has only been able to utilize Mark Andrews.  - Matt

Ravens have won 4 straight games but a focus in Baltimore has been finding weapons to trust to help Lamar Jackson & struggling passing game.

More from @nflnetwork @NFLGameDay on Lamar & long search for someone to fill WR1 role: pic.twitter.com/8iRKUODGZo

Allen Lazard has become second fiddle to Christian Watson over the last few weeks. With Watson’s rise, Lazard’s target share has taken a huge hit, and has now become an inconsistent player and hard to trust on a weekly basis. The last time Lazard faced the Bears he was held to under 10 fantasy points and I can see a similar outcome on Sunday.  - Leo

For those who need to hear it, Christian Watson is the WR1 for the Packers, not Allen Lazard.

Tony Pollard is almost considered a weekly starter outright, but this week, Pollard is in a smash spot. Indianapolis gives up the 10th most fantasy points to running backs, and the Colts' defensive unit just made Benny Snell look like a Pro Bowl candidate. - Matt

The last time David Montgomery faced the Packers earlier this season, he rushed 15 times for 122 yards. With Khalil Herbert still on injured reserve, look for Montgomery to keep it rolling against the Packers in Week 13, as they are allowing the seventh-most fantasy points to running backs this year. - Leo

Since Khalil Herbert went on IR, David Montgomery's role has been great

Plus matchup vs. Green Bay
- Surrendered 364 rushing yards on Sunday night
- Since Week 4, GB is 27th against fantasy RBs pic.twitter.com/ZKy6UKMVyg

I love Brian Robinson's Big Hat, and love how he is supporting his entrepreneurial friends.  I love that he overcame being shot 3 months ago to be in a strong role on an underdog team.  However, I don't love the maddening flip-flopping of his usage with Antonio Gibson.  This week's match-up features a stout run defense on the road in New York against the Giants, and Ron Rivera isn't one to necessarily ride the hot hand.  - Matt

The usage in this backfield changes weekly. Frustrating for fantasy purposes but both are flex options with upside

This is a coming back home game not only for head coach Mike McDaniels but also for Jeff Wilson and Raheem Mostert.  All three were part of the 49ers for the last few years. As for Wilson’s prospects for this game, are not looking too good. The 49ers allow the fewest fantasy points to running backs in 2022. Over their last three games, they allowed only 33.7 fantasy points to Austin Ekeler, James Conner, and Alvin Kamara. That’s only an 11.2 average in that span. If you have other options, you may want to consider sitting Wilson this week if you can.  - Leo

Another tight end that should be in consideration for your starting line-ups this week is Gerald Everett. In Week 1 when he first went up against the Raiders, Everett caught four receptions for 57 yards and a touchdown. The veteran tight end should be hovering around the double-digits fantasy points once again this week. - Leo

The Rams' offense is in complete injury mode. Tyler Higbee was called upon last week to block, and this week, Higbee will likely need to keep whoever the Rams' quarterback is this week from having their head ripped off by the Seahawks' defense this week. - Matt

Tyler Higbee reported as an ineligible receiver for today's game, playing offensive line most of the time.

The last time Robert Tonyan had a productive fantasy day was back in Week 6 when he received 12 targets. Since then he has not seen anywhere near that target share only seeing a high of six targets just once. With the development of Romeo Doubs prior to his injury and now Christian Watson, Tonyan is an afterthought in the Packers' offense and he should be nowhere near your starting roster this week. - Leo

The Dallas Cowboys D/ST face Jeff Saturday and the Indianapolis Colts who just ran a baffling sequence of downs on a potentially game-winning drive against the Steelers this week. Many feel Dallas can make a deep playoff run this year, and Indianapolis, well, won't.  - Matt

Last week the Houston Texans were the gift that kept on giving. The Dolphins’ defense went off last week for multiple sacks and turnovers. This week the Cleveland Browns D/ST gets to tee off on the Texans and should be considered a streaming option for Week 13. - Leo

The Buccaneers had 56 rushing yards on the opening drive of todays game.

They finished the game with 96. Kudos to Joe Woods and that defense. (Photo via #Browns) pic.twitter.com/Gm8kfxFagG

The Cincinnati Bengals D/ST are still fighting injuries in their secondary, and they are headed to Kansas City to face Patrick Mahomes and the Chiefs in a match-up that Vegas has with the highest implied point totals and highest over/under. -Matt

Can the Bengals defense slow down Mahomes again? 👀

"Last year, with the Cincinnati Bengals, they spied him. It absolutely had everything to do with it." — @mspears96 pic.twitter.com/aUrCYxSSrn

What has happened to the Denver Broncos D/ST and the team in general? Yikes! A once-promising defense has faded fast. The last time they provided double-digit fantasy points for fantasy managers was Week 5. This week the Broncos' Defense faces the Baltimore Ravens who allow the fourth-fewest fantasy points to opposing defenses. Look elsewhere for a defense to start this week. - Leo