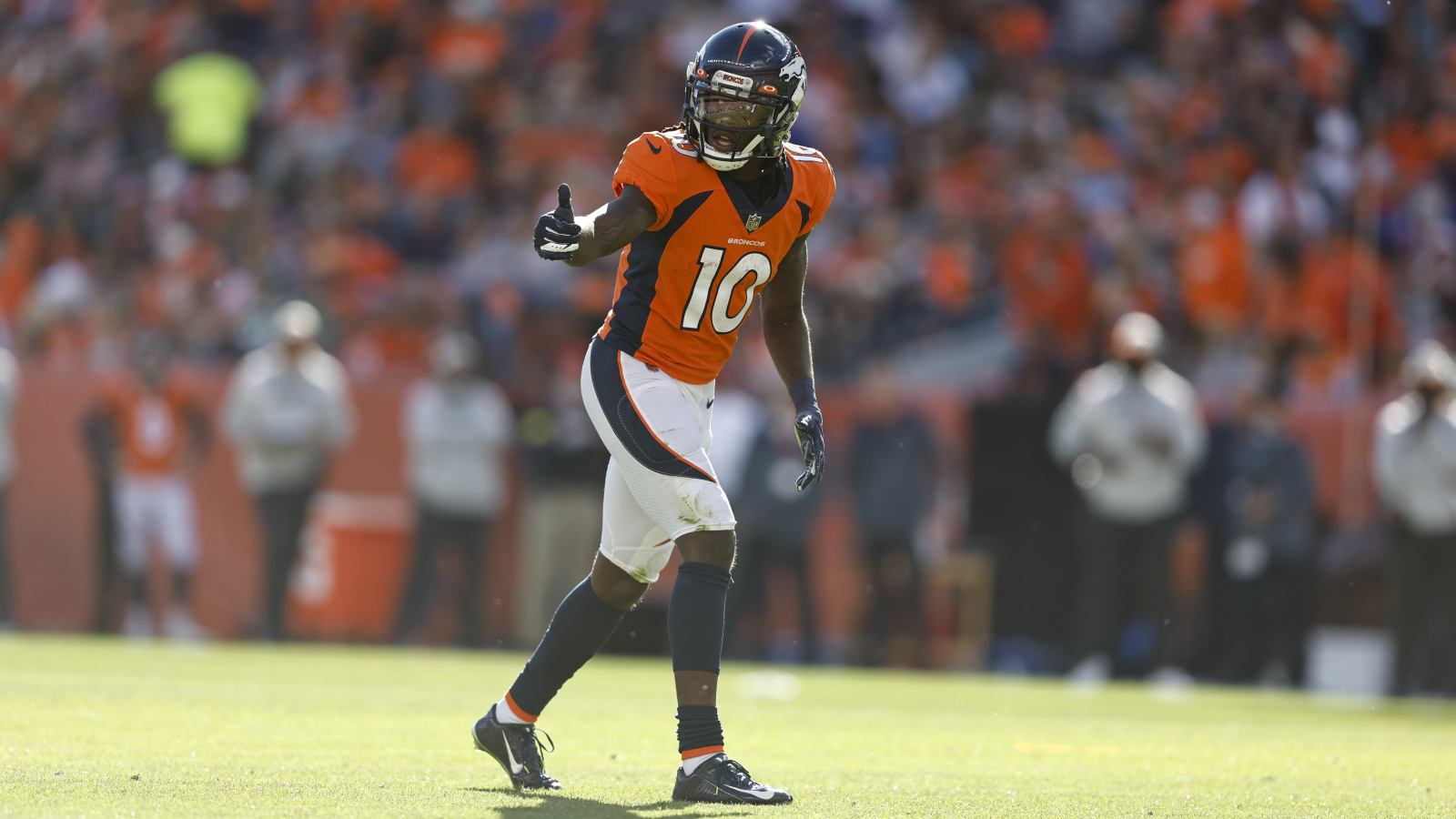 Welcome to the final week of the regular fantasy football season for most leagues and the first week of the playoffs for others.  We thank you for following along this season, and we'll continue to focus on exploiting matchups through the Fantasy Playoffs.  Remember, you're starting your studs no matter what. Don't get cute by sitting them over the players you see here.  This article focuses on who we feel can give you an edge this week.

Jared Goff is home again against the Vikings and he sure loves that home-cookin'. The Vikings give up the seventh-most fantasy points to quarterbacks, including allowing four of the last six quarterbacks to throw for over 300 yards.  In yet another potential offensive shootout under the dome, look for Goff to shine. - Matt Miles @DirtyAirFC

Jared Goff under center on play-action against the Jaguars:

When we saw Kirk Cousins last, he was being held to under 175 yards passing and a touchdown against the Jets' defense. Luckily for him and the Vikings’ offense, they get the Lions' defense which is allowing the most fantasy points to quarterbacks this season. Cousins should get back on track and be a starting option for fantasy managers in Week 14. The last time he faced the Lions, Cousins produced 22 fantasy points by throwing for 260 yards and two touchdowns. - Leo G. @smooth1074

What a difference a year makes.  Arguments can be made for injuries to himself and his weapons, but Kyler Murray has been unstartable at times this year. With a bye week and another game with Marquise Brown and DeAndre Hopkins healthier, it's possible this call blows up in our faces. I still feel there's too much downside to Murray against a stingy New England defense.  - Matt

This year, Kyler Murray is dead last among QBs in DVOA on deep throws.#BirdCityFootball https://t.co/nmtwKogTag

The years of Tom Brady carrying fantasy teams to the fantasy playoffs are long gone. When Brady decided to retire earlier this year everyone thought it was a good decision. But his choice to return to the Buccaneers for one last ride has illustrated that father time is finally caught up to the G.O.A.T. This season Brady has had only one game where he scored over 30 fantasy points. This week he faces the 49ers' defense who are playing at another level and that allows the fourth-fewest fantasy points to quarterbacks this season, so you may want to look else were for a starter this week. - Leo

Lost in the Odell Beckham Jr. parade through The Big D the past week is the fact that the Cowboys' own Michael Gallup is making his own remarkable recovery from a season-ending knee injury in 2021.  With another plus matchup against Houston, Gallup should continue to solidify a WR2 role with the Cowboys this week.  -Matt

It is looking like Courtland Sutton is going to sit out this week, which means it's Jerry Jeudy's time to shine. Russell Wilson will sure make his mistakes against the Chiefs' defense but he will be required to sling it in order for the Broncos to try and keep up. Jeudy just returned last week after being out for a few games with an injury and caught all four of his targets for 65 yards. The target total should rise this week with Sutton out. The Chiefs are allowing the fourth most fantasy points to wide receivers this season, so fire up Jeudy with confidence in Week 14. - Leo

Home and road splits aren't just for Jared Goff.  Amari Cooper has a pretty stark home/road split as well, and it's not pretty when he's away from that Polish Boy sandwich in Cleveland.  Add in Deshaun Watson still getting his game back on the road in a divisional game and Cooper is a hard no from me this week. - Matt

Darius Slayton, meet Darius Slay and the rest of the Eagles’ defense. Slayton continues to be the unquestioned WR1 for the Giants but with no one other wide receiver running on the other side, the Eagles' defense will clamp down on him and force someone else to beat them. Slayton could be used as a flex at best this week. - Leo

It took until the year 2022 in our Lord, but the New England Patriots backfield has finally been given us a Savior.  Bishop Rhamondre Stevenson has blessed the fantasy world with a ceiling of a top-10 performance every week, and a floor of a solid RB2.  Since Stevenson seems to be the only part of the Patriots' offense that is consistent, fire him up against a Cardinals defense yielding the 14th most fantasy points to running backs. - Matt

Yes, Tony Pollard has taken over as the RB1 in Dallas, but that doesn’t mean you can’t start both him and Ezekiel Elliot. Especially this week with the Cowboys facing the sacrificial lamb known as the Texans. The Cowboys should jump out early and then it will be the running show. Elliot could be an RB2 or Flex play this week for teams dealing with bye issues. - Leo

It's a tough week to really suggest sitting anyone, but I've got Miles Sanders pegged as a regression candidate as we head into the playoffs. The Eagles are more than half of the season past their bye week. Jalen Hurts is the third down back. Head coach Nick Sirianni is not afraid to sit starters with a big lead. Boston Scott is a Giant Killer  - Matt

8 of them are against the New York Giants 🤦🏽‍♂️

Rookie Dameon Pierce has been pretty useful overall this season, with eight games where he scored double-digit fantasy points. This week unfortunately may not be one of those weeks. Pierce faces the Cowboys who are allowing the sixth-fewest fantasy points to running backs this season and with horrendous quarterback play from the Texans, look for stacked boxes for the young running back. Tempered your expectations for Pierce this week, it may not be pretty. - Leo

Greg Dulcich when not moonlighting as a Yanni impersonator, Dulcich is pretty good at tight end.  With Courtland Sutton's injury, he earned a whopping 39% target share.  He can pop this week, and who else is out there? - Matt

With Courtland Sutton injured (hamstring) and Jerry Jeudy (ankle) still making his way back to full strength, Greg Dulcich demonstrated the ability to dominate looks with a 35% target share in Week 13.

He could be REALLY good.

Now we just need a new QB and coach... lmao.

I know I know Hunter Henry has been hard to figure out when to insert in your starting line-ups this year, but this may be the time to start the veteran. This week Henry faces the most generous defense for tight ends the Cardinals. The Cardinals not only allow the most fantasy points to tight ends this Fall but also the most yardage by averaging just over 73 yards per contest. Henry could post low-TE1 to high-TE2 numbers this week. - Leo

If you are desperate at tight end, you can piece it together with some combination of these guys:

We preach starting your studs, so you're likely not sitting George Kittle. We're just saying to temper your expectations for Kittle as the quarterback situation in San Francisco could put a damper on his production. - Matt

Although Mike Gesicki has a good match-up against the Chargers this week as they allow the eleventh most fantasy points to tight end, Gesicki is really an afterthought in this high-octane Dolphins offense. The last time Gesicki had a relevant game was back in Week 8. The veteran tight end just can’t be trusted until he shows something. - Leo

Live by these philosophies: smash the under on Thursday Night games, and start your defenses against Baker Mayfield.  The Rams are looking to possibly throw Baker to the wolves immediately off the waiver wire, and suddenly, the Raiders D/ST look serviceable as a streamer this week.  - Matt

Former No. 1 overall pick Baker Mayfield was claimed on waivers today by the Los Angeles Rams, per league sources. The Rams now inherit the remaining $1.35 million on Mayfield’s contract. Mayfield is expected to fly to LA by tonight and could play Thursday night vs. the Raiders. pic.twitter.com/CAIVhY25Nu

The Kansas City Chiefs D/ST has been averaging this season, but if you are looking for a defense to stream this week check to see if they are available. They have an excellent match-up this week against the Broncos who are allowing the sixth-most fantasy points to opposing defenses this season. - Leo The San Francisco 49ers host the Tampa Bay Buccaneers this week, and on paper, this looks like a solid match-up.  The devil is in the details, as only the Eagles have turned the ball over fewer times than Tampa Bay, and the 49ers' offensive injuries will likely keep TB12 in the hunt for a late comeback victory. - Matt

On paper it might've looked like the 49ers D shut down the Dolphins O. Definitely not the case. Walked away thinking better of the Dolphins than I had before. Mike McDaniel had guys wide open all day. Havent seen the SF defense exposed like that in a long time

If you started the Cleveland Browns D/ST last week you probably won your week. The Houston Texans were giving away defensive fantasy points like candy to kids. Unfortunately for the Browns, they battle the Bengals offense in Week 14 that got back Ja’Marr Chase last week and should get Joe Mixon back this week. Look for another defense option this week. - Leo