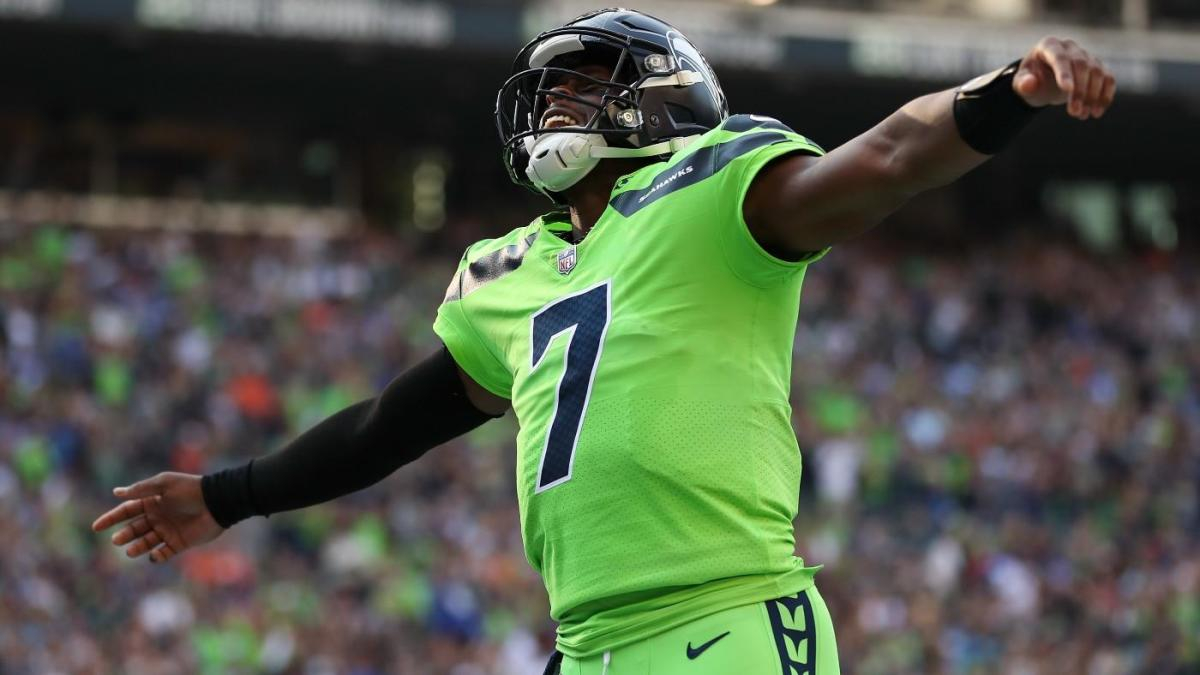 It's Week 6, and the start of the bye weeks in the NFL season. If you're on either side of the .500 mark this week, you know this is where the cream rises to the top! You're starting your studs no matter what. Don't get cute by sitting them over the players you see here.  This article focuses on who we feel can give you an edge this week.

Kyler Murray has a chance to right the ship this week in a divisional game against the Seahawks. Seattle has given up the 10th most fantasy points to opposing quarterbacks, allowing Jared Goff to throw four touchdowns on them just two weeks ago.  Seattle also gives up the sixth most fantasy points to the RB position, and with the Cardinals possibly down two running backs, Murray will be finding room to roam as well.   - Matt Miles @DirtyAirFC

One of the most shocking surprises this year has to be the play of Geno Smith. After years of being mediocre at best behind center, Smith is rewarding Coach Pete Carroll for the faith that the coach had in him to start for the Seahawks. This faith led to Russell Wilson being traded to the Broncos during the offseason. Smith has a streak of three straight games of either throwing for 300 yards or throwing multiple touchdowns. Look for that to continue this week against the Cardinals who give up the ninth most fantasy points to quarterbacks. - Leo G. @smooth1074

Aaron Rodgers was in this same spot last week, and it looks like the fantasy and real-life football woes continue this week.  After a loss to the Giants last week in London, the Pack faces another New York team the resurgent Jets.  Allowing the 15th most fantasy points to the QB position only tells part of the story as the Jets also allow just the 12th fewest fantasy points to wide receivers in 2022, which included keeping both Tyreek Hill and Jaylen Waddle out of the top receiving tier. - Matt

Obviously, hardly anyone will sit Justin Herbert in their fantasy line-ups, but you may want to temper your expectations this week for the stud quarterback. Denver has allowed the third-fewest fantasy points against quarterbacks this season. This may be due to the Broncos being vulnerable versus the running game since they are the worst against the run. Unless Russ can remember how to cook this may be a low-scoring affair. - Leo

Although Tee Higgins left early with an aggravated ankle injury, the arrow has been pointing up for Higgins over the past year.  Despite playing opposite of Ja'Marr Chase, Higgins has feasted.  Higgins will face a New Orleans Saints team that gives up the 10th most fantasy points per game to opposing wide receivers. If Higgins is healthy, he's a full go. - Matt 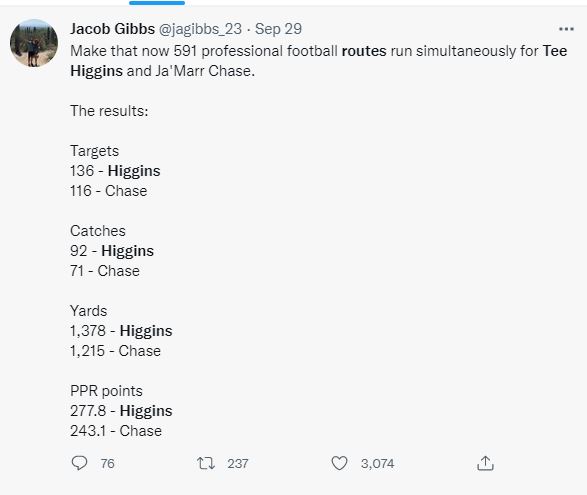 After being an afterthought through the first two games of the season, Darnell Mooney is starting to see his target share become very consistent over the last three weeks. I know plenty of fantasy managers have kicked Mooney to the curb but if you are still holding on to him this may be the week to plug him into your line-up. With Justin Fields starting to toss the rock more look for him to take advantage of the Commanders’ pass defense that is allowing the fifth most points to wide receivers this year. Mooney should receive a minimum of at least five to six targets and be a decent flex play for starting managers who need to fill the voids of receivers on bye weeks. - Leo

Hey D.J. Moore I have great news for you, Baker Mayfield won’t be behind center this week. When Mayfield left the game last week due to injury, P.J. Walker came in and started targeting one of the Panthers' main weapons, which Mayfield has failed to do all season long. This week the game script should be there for the Panthers to pass early and often as they should be trailing the Rams early. The Rams surprisingly have allowed the fourth most fantasy points to wide receivers this Fall. So fire up Moore as WR3 or flex play in Week 6. - Leo

Despite the monster target share over the first 5 weeks,  Courtland Sutton has turned 46 targets into only 29 receptions for 417 yards and one touchdown.  Until Russ starts cooking with gas, Sutton and the rest of Denver's wide receiving corps are sits for me.  - Matt 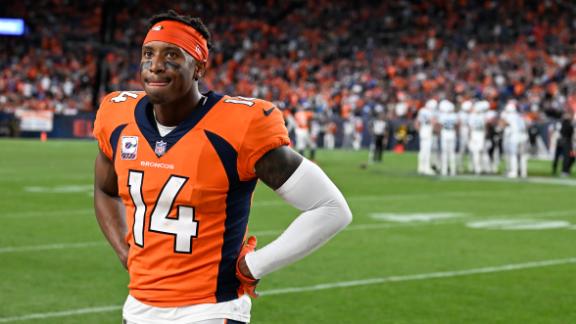 After Christian Kirk's fast start of the season when he averaged close to 21 fantasy per game, he has now scored just 10 total fantasy points over his last two contests. Although Kirk had a breakout performance in Week 2 against the Colts,  Trevor Lawrence has started to get more receivers involved in the offense recently due to Kirk getting more defensive attention from opposing defenses. Maybe you can use Kirk as a flex play due to bye weeks starting but cool your expectations. - Leo

At this point, Keenan Allen has yet to practice since suffering his hamstring injury back in Week 1. Should he become available to play on Monday Night I would not consider starting him since he may be limited if he even plays. There is also the chance that he may reinjure the sore hammy. For those that are rostering Allen, I would consider letting him play a week first before inserting him back into your starting lineup. - Leo

A pretty sizable shift in the run game is happening in Tampa Bay.  Rachaad White has an expanding role on one of the better offenses in the NFC.  Usage guru Dwain McFarland is calling White's new utilization a "Tony Pollard" role.  The numbers don't like and I'd look at White being a usable RB2 start this week against Pittsburgh, in what could be a blow-out game in the Steel City. - Matt 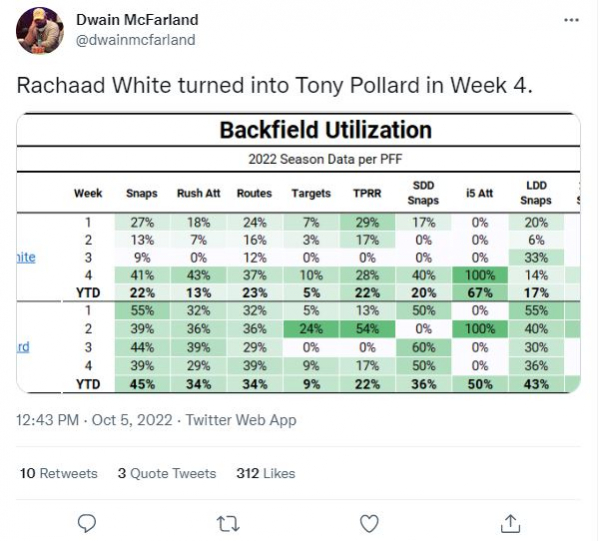 With the unfortunate news of Javonte Williams tore his ACL, the table is set for Melvin Gordon III to be the top dog of this backfield. Last week Gordon had over 100 yards from scrimmage against the Colts, who have a mid-pack defense against the run. The great news for the veteran running back is that he will face the Chargers who have been allowing the most fantasy points to running backs this season and they have been hurting in their defensive front ever since they lost Joey Bosa to injury. - Leo

If Latavius Murray is trending, that only means one thing.

You can probably buy low on Melvin Gordon III.

The player who was keeping Javonte Freaking Williams in a timeshare (so far) & still has a good talent profile can't hold off a recent practice squader?

We preach starting your studs, but Dalvin Cook just hasn't been the same since his shoulder injury.  His snap count is falling and his target share is sub-6%.  Cook faces the Dolphins next, who has allowed one 100-yard rusher in Breece Hall.   - Matt 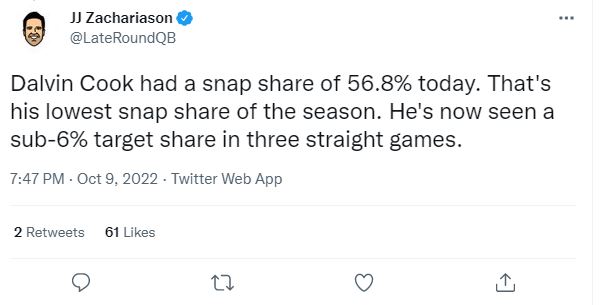 How the mighty have fallen. Najee Harris was a late first/early second fantasy pick for fantasy managers this season. But he has been far from that on your return on investment so far this Fall. I think it’s a good thing that the Steelers inserted Kenny Pickett into the starting line-up because with his big arm he will eventually open up the offense. He’s already getting George Pickens more involved in the offense. But I digress, the most fantasy points that Harris has produced in any given week was 13 points which were back in Week 2 and Week 3. Since then the running back has been unstartable by scoring under eight fantasy points over the last two weeks and now goes up against the stingy Buccaneers defense who are allowing the second-fewest fantasy points to running backs in the season.  - Leo

If you think Najee Harris fantasy managers are panicking now, wait until you see his value plummet after this week’s matchup against the Bucs.

Don't look now, but Zach Ertz is the TE 4 in PPR, in a virtual tie with TJ Hockenson. Ertz is averaging 8 targets a game with 7 catches and about 50 yards in that calculation. Seattle gives up the most fantasy points to tight ends, making Ertz a no-brainer start. - Matt

Trevor Lawrence appears to be taking the next step in his development so far this season. With that improvement comes along the rising weapons by his side. Last season Lawrence loved targeting his tight ends, and this season is no different. Evan Engram has been the one tight end who has enjoyed the love in 2022. This week the Jaguars tangle with the Colts, who already met early this season. In that contest, Engram received eight targets and turned that into seven receptions for 46 yards which is a nice PPR day for tight end these days. Couple that with Engram’s last week’s contest in which he garnered 10 targets and you’re looking at a tight end that is worth the start and could put TE1 numbers this week for fantasy managers. -Leo

For those of you looking for a TE filler with bye weeks and injuries lurking look no further.👀 Evan Engram has averaged over 5 targets a game this year and is only 24% rostered. Great one week fill with accumulating weekly starter potential. #FFB pic.twitter.com/UgmQQsxZnd

Kyle Pitts has been, well, the pits. As a late inactive with a hamstring issue, Pitts is also likely to be on a pitch count if he plays.  Not that you'd need more, but San Francisco has allowed just the third-fewest fantasy points to tight ends in 2022. Brighter days might be ahead, but I doubt they start this Sunday.  - Matt

Ever since Zach Wilson came back from his injury Tyler Conklin’s target share has started to tumble down the rabbit hole. When Joe Flacco was the starter Conklin averaged eight targets per game, and with Wilson, back in the huddle, Conklin has gotten only six total targets in the last two weeks. Last week Conklin only received one target, making him unreliable due to Zach Wilson only targeting wide receivers now. The Packers are also allowing the fifth-fewest fantasy points to tight ends making Conklin unstartable in Week 6. -Leo

Jets offense in the first half. Tyler Conklin szn was fun while it lasted pic.twitter.com/pcYie6WQzn

The Washington Commanders D/ST is a solid play against the Bears this week.  A low Bears implied total and a middle-of-the-road ranking makes the Commanders a serviceable streamer this week. Need more? Washington put five sacks on the Titans last week, and Justin Fields has been sacked 18 times in 5 games this season. - Matt The Los Angeles Chargers D/ST get to play against one of their divisional rivals the Broncos in Week 6. The Broncos have allowed multiple sacks in every game this season and at least one turnover in four of the first five games. Look for that to continue to happen as Russell Wilson seems to have forgotten how to cook and Nathaniel Hackett has no idea how to coach in the NFL. - Leo

it might seem counterintuitive to skip over a defense facing the Jets, but the 2022 Jets aren't your 2021 Jets.  The 1-2 running game punch and solid receiving corps hide a lot of the QB flaws and have kept opposing teams honest.  Look for the home dogs to disappoint the Dolphin's Defense starters. - Matt

If you drafted the Buffalo Bills D/ST you thought they were a set-it-and-forget-it defense. In just about any other week this is the case, but this week against the Chiefs you may want to think about benching them for Week 6. The last time these two teams played, was in the playoffs this past January and it was fireworks galore with these offenses. They combined for 78 points and this rematch may be more of the same. - Leo