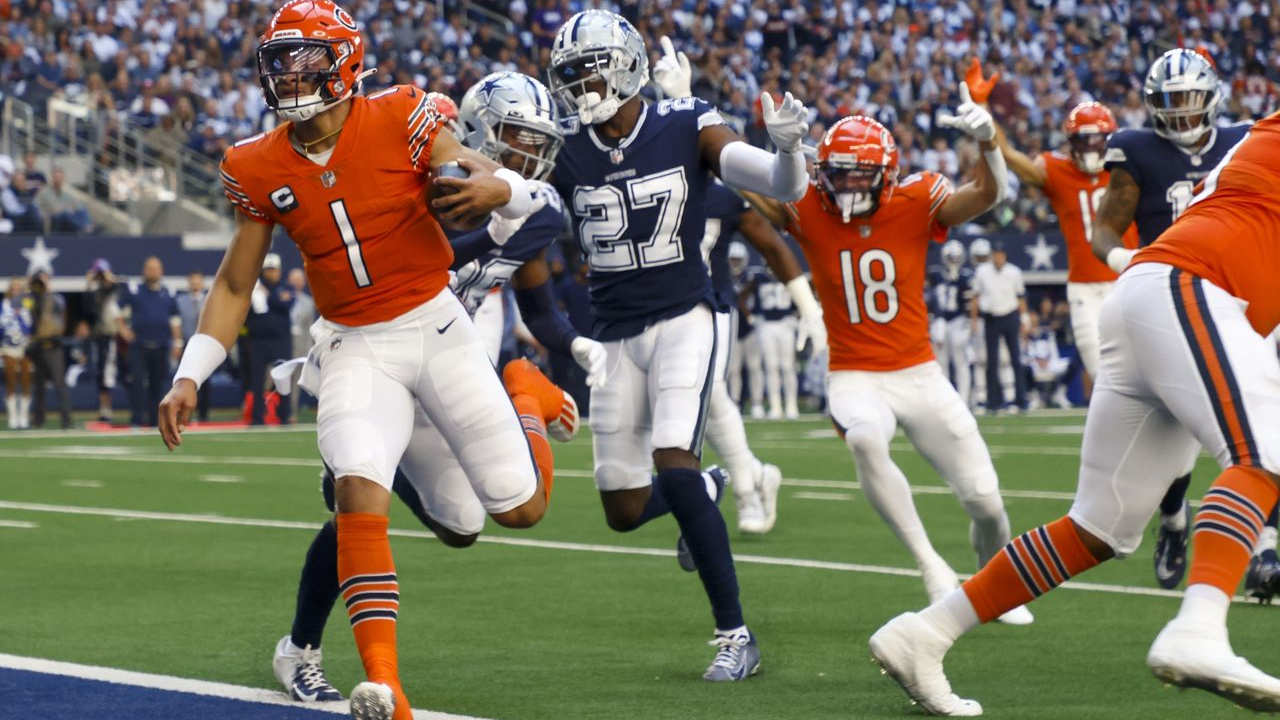 Week 9 will be a tough week navigating through all the byes.  We've got you covered for an edge on stacking points toward your championship run! You're starting your studs no matter what. Don't get cute by sitting them over the players you see here.  This article focuses on who we feel can give you an edge this week.

The RB1 for Chicago getting designed run plays isn't David Montgomery, it's Justin Fields and he can get you through the bye weeks with his legs.  Fields has looked sharper with career highs in completions and passing against a good Dallas Defense as well. Look for Fields to continue to improve against Miami, which is allowing the 7th most fantasy points to quarterbacks in 2022. - Matt Miles @DirtyAirFC 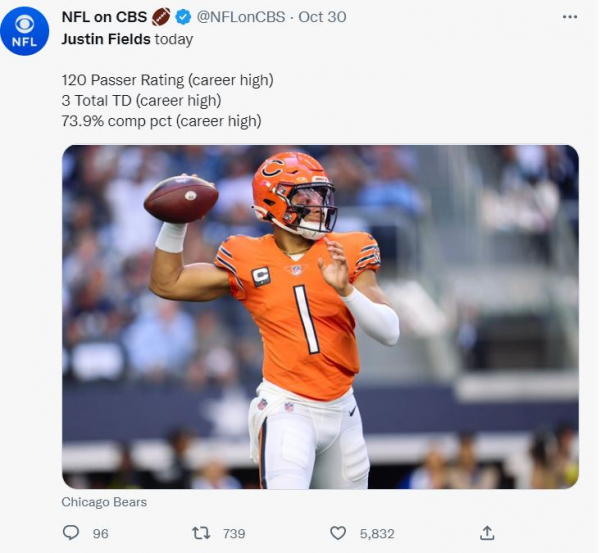 This year we have seen Trevor Lawrence make strides in his game. Last week Denver’s defense really did a number on Lawrence and the receiving game. But this week with so many teams on bye Lawrence is a quarterback to get in your line-ups. The second-year quarterback faces the Raiders who for some reason are not getting it done as a team and are horrific against quarterbacks. The Raiders are allowing the most fantasy points versus quarterbacks this fall. This is giving fantasy managers a green light to insert Lawrence in their line-ups. - Leo G. @smooth1074

I'm not arguing over the career of a locked-in Hall-of-fame quarterback. I'm just saying, chances are if Tom Brady is on your roster, you're likely in WIN-NOW mode. The G.O.A.T. is looking more like a sheep lately with a league-low completion percentage rate. The Bucs are facing an underrated pass defense in the Rams, which allows the 10th fewest fantasy quarterback points allowed.  - Matt

After lighting the league on fire for the first four weeks of the season, Jared Goff’s game has returned to inconsistencies like in the past. Goff has had only one 20-plus fantasy point game over his last three games. Couple that with the fact that he is facing a Packers defense that is allowing the fourth-fewest fantasy points to quarterbacks this year, and this makes Goff a sit for me in Week 9. Even the almighty Josh Allen was held to 23 fantasy points by the Packers' defense last week.  - Leo

Sometimes a change of scenery can do us all some good.  Kadarius Toney is an electric YAC monster.  Toney has also played quarterback in the past, and head coach Andy Reid loves wildcat option plays.  The upside is to the moon with Toney, but the floor is also zero. We're here to win, so it makes sense to start to go for the upside with Toney in deeper leagues this week.

Did we finally see the awakening game from Romeo Doubs last week? I think so! After having two good games in weeks two and three, Doubs had plenty of issues holding onto the ball from Week 4 to Week 6. So much so that he could not be trusted by Aaron Rodgers. But last week Doubs was the only receiver making plays and produced four receptions for 62 yards and a touchdown. What makes the Doubs a start for me is the Packers' Week 9 opponent, the Lions. The Lions just got lit up like a Christmas tree by the Dolphins and are allowing the fifth-most fantasy points to wide receivers this season, making Doubs a start in 12-team leagues. - Leo

Despite the rushing touchdown last week, the Bills just aren't using Isaiah Mckenzie. With just a 53% snap participation, he's almost off the field as much as he is on it.  The Bills face the Jets, which allow the 9th fewest fantasy points to wideouts. - Matt

After last week’s breakout performance (six receptions for 115 yards) many may be shocked to see Garret Wilson’s name in the sit section. The reason for this is his opponent for Week 9. The Bills' defense is only allowing 146.7 passing yards a game and is about to see the return of All-World cornerback Tre’Davious White. White is set to return to game action after being activated from IR earlier this week. This will make the Bills’ defense, even more, deadlier. Opposing wide receivers beware, Mr. Shutdown corner is back!  - Leo

We have activated Tre'Davious White from the PUP list! ❤️💙

Khalil Herbert is earning more touches, with carries of seven, 12, and 16 and yardage of 74, 62, and 99.  It's a matter of time before Herbert flips the timeshare to his favor and we enjoy more RB1 upside at your RB2 slot.   - Matt

This season the Texans’ rush defense has been continuously streamed rolled by opposing rushers. So much so that they are allowing the most fantasy points to running backs this year. Unlike the last few years, Miles Sanders has been pretty consistent this season for the Eagles. Obviously having A.J. Brown on offense alleviates the pressure from the run defense and this week will be no exception. Fire up Sanders with confidence as he should post close to RB1 numbers this week. - Leo

The Texans are the only team listed that has already had their bye.

On a short week, expect PHI to lean into the run tomorrow.

Miles Sanders is a top-10 fantasy RB this week.

I wanted to give a bonus running back to start this week in a flex spot with all the byes in effect for Week 9. After plenty of tough match-ups, Tyler Allgeier came through big time last week for fantasy managers as he produced 17.5 fantasy points in Week 8. Allgeier was a factor in the rushing and receiving game and has another juicy match-up this week against the Chargers. Since Joey Bosa went down with an injury earlier in the season, San Diego’s defense has faltered making them vulnerable against the run. The Chargers are allowing the second most fantasy points to running backs this year, making Allgeier a nice flex play for fantasy managers for this week. In deeper leagues, you may want to start Caleb Huntley who has been producing in PPR leagues. Just check Cordarelle Patterson's status leading up to the game because if he is back practicing and if he is active for the game then start Patterson instead.

It's been a rough year for Jonathan Taylor, the 1.02 pick in many fantasy leagues this year. Taylor has more fumbles lost (2) than touchdowns (1).  He's nursing an ankle injury, it's best to sit Taylor if you have alternatives. - Matt

With so many weapons the Chiefs have on offense, it is tough to trust Clyde Edwards-Helaire in your line-ups coming off their bye. Right before their bye coach Andy Reid claimed Isiah Pacheco is to be the starting running back for the Chiefs, and Jerrick McKinnon is also involved in the backfield timeshare. The Titans have corrected things in their rush defense after allowing Saquon Barkley to explode in Week 1. The Titans are allowing the ninth fewest fantasy points to running backs this year.  - Leo

So... nothing changed. Can't trust it.

Sometimes "just fine" works, well, just fine at tight end. Gerald Everett has benefitted from injuries to Keenan Allen and now Mike Davis is likely out a few weeks off the Chargers bye. The floor with Everett is pretty safe, with a 21% target share and about 4 catches per game.  - Matt 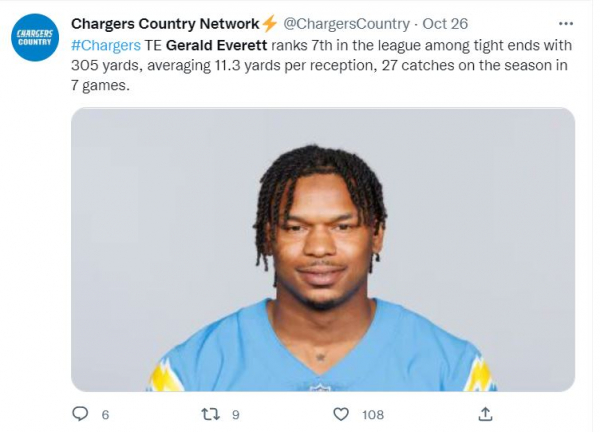 Although Trevor Lawrence has had his ups and downs over his first two seasons in the league, the one thing that can be said is that he loves throwing to his tight ends. Unless you have one of the Top-2 tight ends in the league, all fantasy managers can ask for is for your tight end to give you double-digit fantasy points in PPR leagues. Over the last month that is exactly what Evan Engram has done. In that span, Engram has averaged 12 PPR fantasy points. The veteran tight end is going up against the Raiders In Week 9. They are allowing the third-most fantasy point to tight ends. Start Engram in 12-team leagues and thank me later. - Leo

The tight end landscape is littered with disappointment and regret. Tyler Higbee is no exception with his role being relegated to keeping Stafford upright instead of catching passes.  Sit Higbee if you can. - Matt

My bold move of the week is considering sitting Mark Andrews. Now actually sitting him, maybe another story. After last week’s earlier departure from the game due to a shoulder injury, Andrews has yet to practice this week and could be limited for the remainder of the week. Andrews might just get ruled out due to the Ravens having a bye next week. On top of that, the Ravens are facing the Saints' defense who are number one against tight ends and have allowed the fewest points to the position this year. Monitor this situation as we get closer to the game time and be ready to have another option ready. -Leo

The Minnesota Vikings D/ST face the Washington Commanders this week, a team that has given up six sacks, two interceptions, and 1 defensive score over the past 3 weeks.  The Commanders will be aggressive to keep pace with Minnesota, making the Vikings a good spot-start this week.    - Matt

The Miami Dolphins are all in this year. Right before the trade deadline, the Dolphins added Bradley Chubb to their defense which will greatly improve their defensive line. The Miami Dolphins D/ST has a favorable match-up this week against the Bears.  The Bears' offense has allowed the fourth most fantasy point to opposing defenses in 2022. If Chubb ends up playing you may want to consider the Dolphins as a streaming defense or a bye-week fill-in. - Leo

Dolphins' pass rushers for the rest of the year (barring another trade):

Don't let the match-up fool you. Carolina had been letting DJ Moore catch balls, and their tandem of running backs is decent with fresh legs.  I doubt Carolina takes the W in Cincy, but it's not going to be a shut-out. - Matt

One of the biggest letdowns in team defenses this year has to be the Los Angeles Rams D/ST. They have plenty of playmakers on defense but have nothing to really show for it. Their only double-digit fantasy points outing for the season was against the lowly Panthers. This week the Rams battle the Buccaneers who allow the eighth-fewest fantasy points to opposing defenses and have turned the ball over only once in the last four games. - Leo