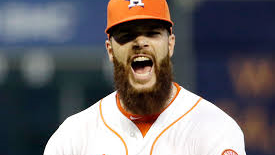 Here's the thing. Sometimes we get focused so much on our own team(s), that sometimes we don't look around and see how other players are doing. That may lead us to miss out on potential free agent grabs, or maybe "buy low" opportunities. Fear not, however, because we here at Fighting Chance Fantasy have you covered! We will be filling you in each week on players who are playing well, and those that may be struggling a bit. Hopefully you can use that to your advantage, and build your roster into championship caliber, material!

JT Realmuto is trying to prove he's for real...and I believe him.

JT Realmuto, Catcher Miami Marlins. You know you're off to a good start, when on Saturday, JT Realmuto went 3-6 against the Mets, and his batting average DROPPED! The Marlins' catcher is hitting over .500 on the season with two home runs, six RBIs and six runs through Saturday. Don't sell-short on Realmuto. I think his stock is about to enter it's maturation state.

Mark Reynolds, 1B Colorado Rockies. Mark Reynolds went undrafted in most ten and twelve team, mixed leagues, but that didn't deter the veteran from getting off to a hot start. He's hitting over .400 through the first week, with three home runs and eight RBIs. With Ian Desmond still set to be out through April, Reynolds will hope he can keep this scorching start going a little bit longer.

Corey Dickerson, OF/DH Tampa Bay Rays. Here's an interesting statistic. In 2016, Corey Dickerson had a grand total of 11 plate appearances, hitting leadoff for the Rays. In 2017, he already has 19 (of 22) plate appearances batting leadoff. He's hitting .381 through Sunday, and if he continues to hit at the top of their lineup, he could be in for a nice supply of runs this season.

Gerardo Parra, OF Colorado Rockies. One man's loss is another man's gain. With David Dahl beginning the season on the DL, Gerardo Parra has made the most of his opportunity. He came into camp this season, 20 pounds lighter than he did last year, and it looks like it is helping his performance, as he's hitting .400 with a home run and five RBIs though Sunday. It remains to be seen if he will hang on to the role once Dahl is healthy, but until then, it looks like Parra is worth rostering until he cools off.

Dallas Keuchel, SP Houston Astros. Last year was a dumpster fire for Astros' starting pitcher, Dallas Keuchel. The former CY Young Award winner, went 9-12 with a 4.55 ERA in an injury-plagued, season. He also suffered a little bad luck last year, but now healthy, Keuchel is hoping to return to his 2015 form. He's off to a fantastic start as he has gone seven innings in each of his first two starts, giving up a total of one earned run, on only two hits in each performance. He's looking like the dominant ace that the Astros were looking for last year, and I feel like this is just the beginning of a very good season for Keuchel.

Dylan Bundy, SP Baltimore Orioles. Dylan Bundy has only one start so far in 2017, but he showed why some people picture him as a future, top of the rotation, type pitcher. Bundy faced a tough Toronto lineup on Wednesday and went seven strong innings, giving up only one earned run, while striking out eight batters versus zero walks. I'm developing a crush on him. I'm not going to breakdown his performance, because others that are way more qualified than me are gushing about it. I encourage you to read this article on Fangraphs titled, Dylan Bundy Made the Blue Jays Look Silly, because it may give you a better appreciation for the youngster. He showed us in Week 1, that we need to take notice of him in fantasy leagues right now.

Kendall Graveman, SP Oakland Athletics. Two games, two wins for the 26 year old A's starting pitcher, Kendall Graveman. He has seen a nice uptick in velocity this season, and that has led him to only giving up three earned runs over 13 innings while striking out 12 batters. He's young and entering his prime, and if Week 1 is an indication of what we should expect this season, Graveman should be picked up in most leagues before Week 2 kicks off.

Greg Holland, RP Colorado Rockies. Going into this season, many wondered whether the closer role in Colorado would go to Adam Ottavino or to Greg Holland. Those questions were answered in Week 1 as Holland went a perfect, four for four, in save opportunities. Health was a major concern for him, as he was coming off Tommy John surgery, but all signs point to him being healthy in 2017. Colorado has a very good lineup, and they could put Holland in a good number of save opportunities this season, and Week 1 has Holland atop my weekly, "Stock Up" performers. 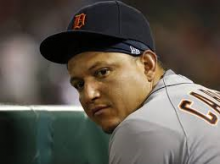 Miggy may be off to rough start, but he's too good to hold down for very long.

Miguel Cabrera, 1B Detroit Tigers. It surprisingly took until Sunday for Miguel Cabrera to earn his first hit of the 2017 season. An 0-13 start is not what anyone would expect from one of the best hitters in baseball, but it's been a rough start for Miggy. Never fear though. Cabrera still has a lot of good baseball left in him and I expect him to turn things around in short order.

Jose Altuve, 2B Houston Astros. I'm sure that those who drafted Jose Altuve, didn't foresee him owning a .160 batting average with one stolen base and no homers, RBIs or even runs scored, after Week 1, but that's exactly what happened. Like Miggy, don't expect this slump to stick around long. It's only a matter of time before his bat heats up like a Ryan Hallam, post-chili-Sunday, gas attack.

Trea Turner, SS Washington Nationals. A lot of people, including myself, are high on Trea Turner in 2017. However, he didn't make those people feel all warm and fuzzy inside, after hitting .158 in Week 1, with no home runs, RBIs or runs. He did have three stolen bases, which helped a bit, but he is now dealing with a hamstring injury, and is in danger of missing a few games. He isn't expected to be placed on the DL, but this isn't the way many envisioned the youngster, kicking off the season.

Mookie Betts, OF Boston Red Sox. Maybe it's not fair to include Mookie Betts on this list since, his struggles are tied to him missing time with the flu, but I'm going to do it anyways. I'm such a jerk! The reason I'm adding him to the list is because he played in the first game of the season, then was out until Sunday, where he went 0-3. Owners who played him in leagues where they have weekly lineup locks, got hosed. He is feeling better, so I'm not worried about him, but owners have to be upset with his Week 1, tummy issues.

Masahiro Tanaka, SP New York Yankees. Yuck! That's about all I have to say about the horrific start of the season that Masahiro Tanaka displayed. On Opening Day, he got blasted by the Tampa Bay Rays, and while he looked a little better in game two against the Orioles, he still gave up three earned runs in five innings. He's having control issues and does not look good at all. He gets to try and redeem himself with another outing against the Rays in Week 2, but fantasy owners need to monitor his next few starts closely, to see if he can turn this ship around.

Gerrit Cole, SP Pittsburgh Pirates. After two starts, Gerrit Cole has given up eight earned runs on a total of 15 hits, over his first two outings. Not only that, but he's only struck out a total of six batters, which has really limited fantasy value. He did look better in his second outing than he did in his first, but a Week 2 matchup against the Cubs on Friday doesn't instill confidence in me that his turnaround will happen this week.

Corey Kluber, SP Cleveland Indians. Look, I'm not advocating panicking on Corey Kluber. However, some people are just notoriously, slow starters. Kluber has given up seven earned runs over his first two starts of the season, which has set his ERA at 7.50 to date. This looks familiar to those who follow the Indians, because he hasn't had an ERA under four in March/April since 2013. If history repeats itself, he may be in for another rocky start or two, but that just may be enough for you to buy-low, just in time for him to heat up this summer.

Sam Dyson, RP Texas Rangers. I'm not sure that there is a player who had a tougher week than Rangers' closer, Sam Dyson. He blew his first two saves of the season, giving up eight earned runs in those contests. He's still the Rangers' closer, but his hold on the job is tenuous at best, after his disastrous Week 1.