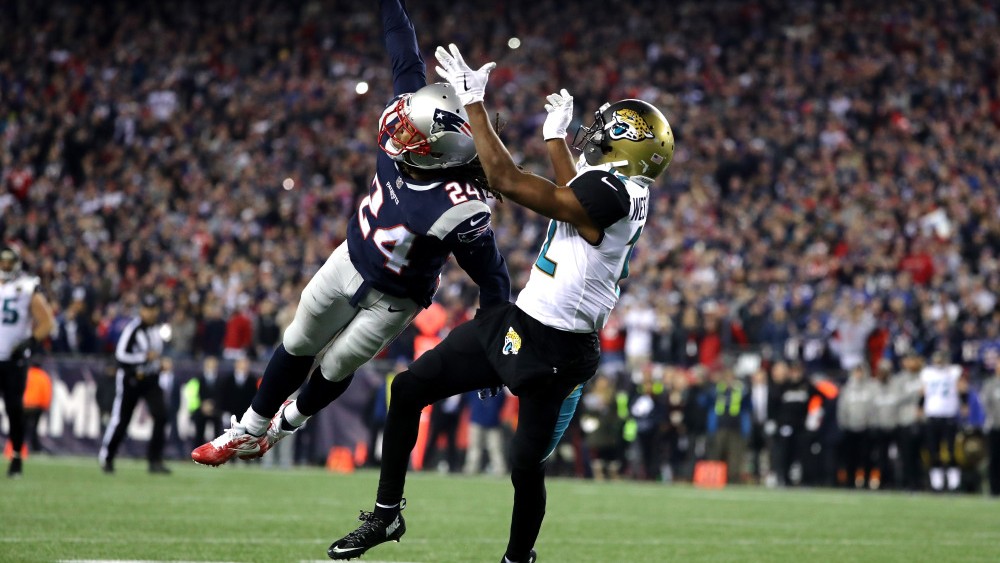 Streaming defenses seem to be all the rage this season, and for good cause. There are a lot of decent defenses just hanging out on the waivers. Playing defenses based on match-up is a smart strategy. They may not always hit, but I can confirm that streaming has been advantageous for me this season. Hopefully, you’ve been able to take advantage of good match-ups and nice fantasy points throughout the weeks. For this upcoming week 8, there are plenty of available options out there that could help rack up those fantasy points.

We already know that streaming defenses against the Buffalo Bills is a wonderful idea. The Bills are looking shoddy this season, and they have coughed up the most fantasy points per game to defenses. Derek Anderson is going to be under center this week and LeSean McCoy is probably out. This is a recipe for Patriots’ defensive success.

The Colts were able to beat the Bills last week with a score of 37-5. New England was able to rack up 14 fantasy points versus the Chicago Bears, with two touchdowns and an interception in week 7. The Patriots will more than likely do something similar to what they did against the Bears, so you can stream them with confidence.

The New York Giants are an anemic offense that can easily be taken advantage of. Insert the Washington Redskins into your line-ups and rest assured they will help get you those much-needed fantasy points. The Giants do not notch a ton of offensive points, and although they do have talented weapons, Eli Manning still doesn’t look great out there.

The Giants are giving up a large number of fantasy points to opposing team defenses. They currently give up the eighth-most fantasy points to defenses, and Washington will have the edge here as they rank fifth overall in total defense this season. For fantasy purposes, Washington is ranked 19th overall, but they have had some big games this season including last week’s win against Dallas where they tallied 15 fantasy points.

The Steelers’ defense hasn’t looked stellar this season, but they can still get the job done. In week 8, they are playing the Cleveland Browns in Cleveland. Baker Mayfield is a talented young quarterback, but he also suffers from the turnover bug.

In the last three games Mayfield has played, he was sacked a total of 15 times. In general, Cleveland has allowed 31 sacks over their seven games this year. That is actually the most sacks allowed in the NFL this season. The Pittsburgh Steelers are ranked second in the NFL when it comes to sacks, putting up a solid 22. Pittsburgh has already had their bye week, so that makes this statistic even more remarkable. Cleveland has also had ten takeaways against them this year, so the Steelers aim to continue this trend.

Oakland has been turning the ball over a lot this season. In fact, they have turned it over multiple times in every game this season with the exception of one. Derek Carr has been sacked 17 times this season, and this looks to be an opportune situation for the Indianapolis Colts who take him on this week. The Colts also find ways to get turnovers in almost every game they play.

The Colts were up against the Buffalo Bills last week, and you may have picked them up then. If that is the case, you can feel positive that they can do well against the Raiders. If they are available to pick up off of waivers, they could have another good fantasy game. The Raiders are going to be without their running back Marshawn Lynch for a while, and Amari Cooper was just traded to the Dallas Cowboys. This helps the Colts in week 8 if you choose to stream them.

This one is a longshot but could work out in your favor if things go right. The Miami Dolphins are quietly playing decent on defense this season. They do have two games where they had negative fantasy points, but they have looked good in other games. In week 8 they take on the Houston Texans who are having a hard time blocking this season. The Texans have allowed a total of 26 sacks and counting.

Houston quarterback Deshaun Watson has a lung injury and was not able to fly back to Houston after their last game. Instead, he had to take a bus ride from Jacksonville back home. Watson played in the game on Sunday even though he was having trouble with that injury, but Coach Bill O’Brien says Watson will be fine to play against Miami. He will have to rest up to be able to play decently on Thursday night football when they take on the Dolphins. The short turnaround could be beneficial for the Dolphins’ defense.

Other defenses to consider if none of those are available include Seattle Seahawks, San Francisco 49ers, and Arizona Cardinals.