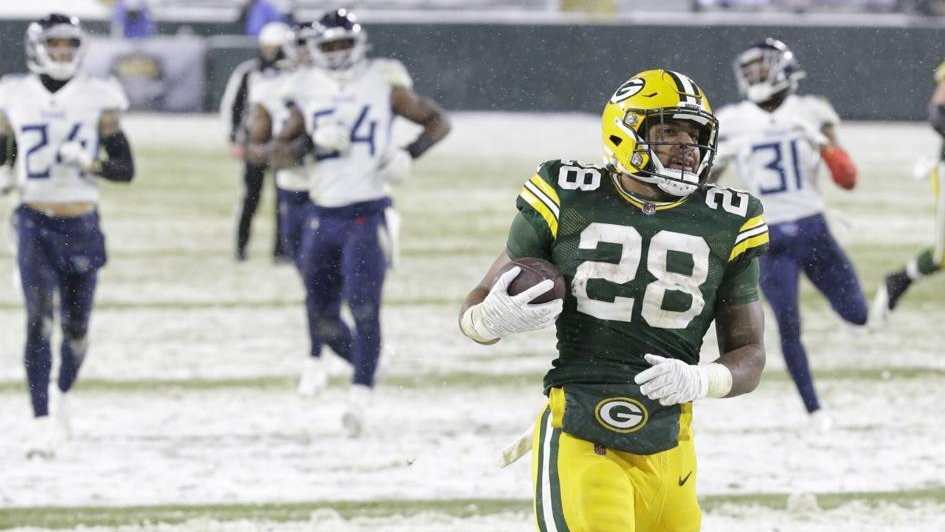 Every year, NFL stars rise and fall; players who were once fantasy darlings land on the “do not draft” list seemingly overnight. However, sometimes, the opposite is true. Today, we’ll look at some of those underperforming running backs from 2020 who are set to break out in the upcoming season. If you missed it, please check out my article on quarterback breakout candidates.

James Conner is one of the most polarizing players I’ve seen this off-season at any position. He’s dealt with his fair share of injuries, and he’s in a new system with the Arizona Cardinals. To make things more complicated, he’s in a shared backfield situation with Chase Edmonds, who many people think will be the RB1 on the team. I don’t think that’s the case, and I’ll tell you why. In 2020, Conner ran behind the 31st ranked run-blocking offensive live in Pittsburgh. As a team, the Steelers only averaged 3.6 yards per carry, but Conner averaged 4.3 YPC. To put that in perspective, Kenyan Drake only averaged 4 YPC and Chase Edmonds averaged 4.6 YPC behind a much better offensive line. How much better? The Cardinals’ line was 6th in the NFL last season with a 72% run block win rate.

Chase Edmonds’ usage also bolsters a breakout argument for Conner. In three seasons in the NFL, Edmonds has only had ONE goal-line carry. You read that right: one. He’s also never had more than 100 carries in a season. Even in Week 9 last season when Drake was out, Edmonds had 25 rushing attempts for 70 yards, averaging a lackluster 2.8 YPC. Conner, on the other hand, has the ability and sight to convert in the red zone, making him a valuable fantasy option. Even if Edmonds is the three down back, history shows that Conner will get the goal-line work. As an added bonus, Conner’s ADP is around the 90-110 range, depending on what type of league you’re in, making him an excellent value in the later rounds of the draft. If he can stay healthy, Conner is primed for a breakout year.

Dobbins had a decent outing as a rookie, finishing as RB23 in fantasy points. He capped the season with a monstrous game against the Cincinnati Bengals, racking up 160 yards and two touchdowns. Dobbins’ numbers could have been much higher, but he was working out of a committee backfield with Mark Ingram and Gus Edwards. With the departure of Ingram, Dobbins looks to take over as the main back in 2021. He has explosiveness and efficiency that fits perfectly in the Ravens’ run-heavy system. Don’t believe me? In 2020, Dobbins finished with the 4th-highest percentage of runs over 10 yards and averaged 6 YPC, the best in the league. The Ravens’ coaching staff has also said they want Dobbins more involved in the passing game, inflating his value even more. If you want the icing on the cake, Dobbins is currently being drafted in the third round. At that ADP, he’s is a steal.

Ah, you know I couldn’t leave the “Quadfather” off the list. Even though he didn’t see much work during his rookie campaign, he made the most of the 46 carries he got, averaging 5.3 YPC and reaching the end zone twice. The highlight of his year came against the Tennessee Titans Week 16 where he put up an impressive 124 yards as the third-string back. This season, the departure of Jamaal Williams leaves an insane number of offensive snaps vacant and ripe for the taking. Under Matt LaFleur, Williams saw an average of 148 touches per season and played on 40% of all offensive snaps. I don’t quite see LaFleur using a committee approach, but if history repeats itself, plenty of touches will be available. Unless Green Bay makes a surprise trade before the season starts, the only competition for Williams’ role is seventh-rounder Kylin Hill. Dillon has the strength and explosiveness to keep opposing defenses honest when Aaron Jones is off the field, and with a full year in Green Bay’s system, the opportunities, and a year of experience, he’s going to put up solid numbers this season.

Wow, did this guy let down a lot of people in 2020. The pre-season hype surrounding the first-round rookie catapulted him into the top 10 in most redraft leagues. In the beginning, he looked to be making good on the ROI of his ADP, but then Kansas City had to go and mess it up by signing Le’Veon Bell. Bell consumed a sizeable portion of CEH’s touches, causing them to dwindle from an average of 21.3 touches per game to 12.7. There was also concern over CEH’s ability as a goal-line back, and they had good reason to be concerned. If you need an example, he rushed for negative two yards on six goal-line carries against the Houston Texans, who ranked dead last in run defense.

So, with all these negative things to say about him, why am I including him in the breakout column? First, Bell is no longer on the roster, leaving Darrel Williams as CEH’s only real competition. Second, Kansas City revamped their offensive line BIG TIME. They released Eric Fisher and Mitchell Schwartz but signed Joe Thuney and Austin Blythe in addition to drafting Creed Humphrey. The Chiefs aren’t messing around protecting their offensive assets after Mahomes ran for his life in the Super Bowl, and CEH can only benefit from this beefed-up line. Finally, CEH may just be a victim of inflated ADP. He still finished with over 1,100 yards even with his goal-line struggles and games missed. It may be cool to hate him, but the talent is there.

This may not be considered a hot take, as Swift was coming on down the stretch last season, but since he didn’t play a full season, I figured I would include him in this list. Lots of things have changed in Detroit since last year, and Swift looks to be the prime beneficiary. Adrian Peterson, who led the team in carries in 2020, and Kerryon Johnson are both gone. Even though the team added Jamaal Williams in free agency and Jermar Jefferson in the draft, Swift is locked in as the RB1. The Lions also added Jared Goff to their team in a massive trade. Goff lives and dies by the short pass, only averaging 6.3 air yards per attempt. Finally, and probably the most important upgrade for Swift is the addition of former Chargers’ head coach Anthony Lynn as offensive coordinator. Last season, the Chargers ranked 1st in plays per game; under Matt Patricia and Darrell Bevell, the Lions ranked 28th. This faster gameplay is a perfect situation for Swift to thrive. I think he finishes in the top 10 this season.

If there’s anyone I left off this list or someone you think I shouldn’t have included, let me know @Britt_Flinn on Twitter. As always, thank you for reading!