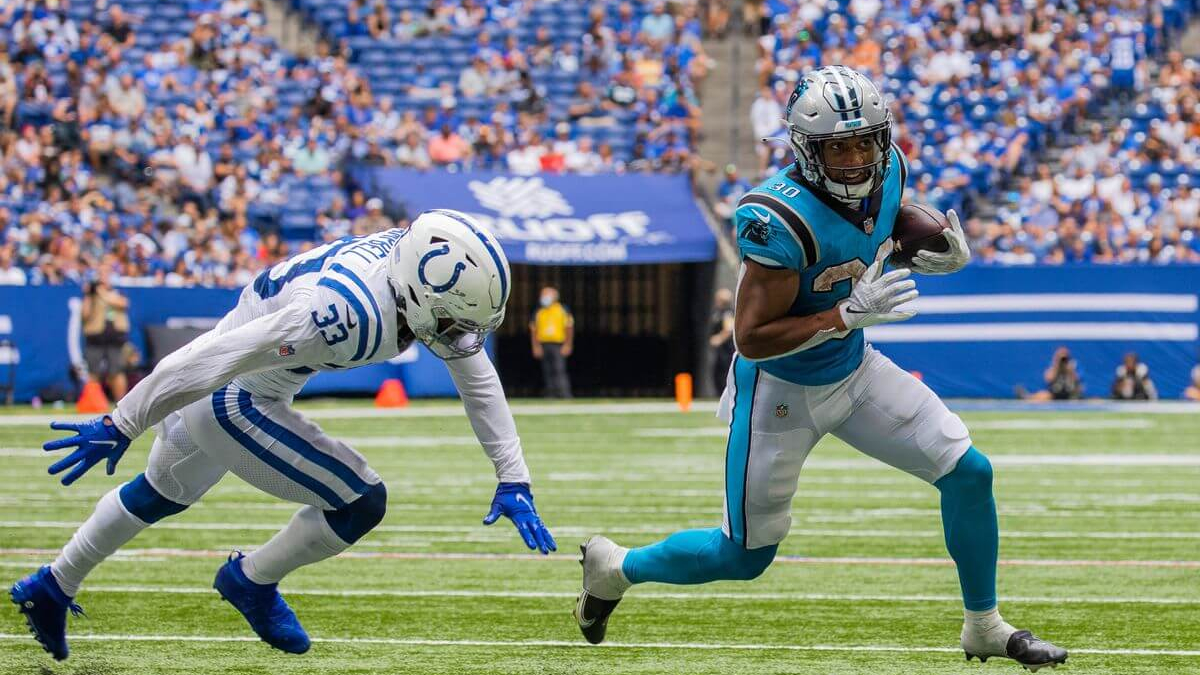 Taking a Moment For Tags & The Christian McCaffrey Response

I am heartbroken to tell everyone that @MikeTagliereNFL passed away peacefully last night. We are so thankful for your support and prayers over these past weeks. Tags appreciated all of you more than you could know. He wrote this 6 years ago and I think it’s just perfect . . . pic.twitter.com/VrZJm21BAR

Although I didn't know Tags personally, he and his family often crossed my mind as Tags battled COVID-19. Life is short, and unfortunately, we lost a father, husband, and inspiration to many. As a consumer of Tags content, I felt connected as a reader and a listener. FantasyPros created a GoFundMe if you're able to support the Tagliere family.

There's no easy way to transition into the topic of the CMC Response. The quick response to the Christian McCaffrey injury involves adding rookie Chuba Hubbard. However, in most leagues, fantasy managers scooped up or drafted Hubbard as a player to stash. Hubbard became a zero RB target since we observed Mike Davis fill in for McCaffrey in 2020.

After digesting the McCaffrey injury, it led to wondering about the advanced stats for McCaffrey and Mike Davis. It's wild, and no surprise to see the efficiency for McCaffrey from an Expected Points Added (EPA) standpoint the past three seasons. However, it's a limited sample in 2020 and 2021. Regardless, we notice McCaffrey overcame a below-average offensive line, evidenced by the Run Blocking Efficiency in 2020 and 2021. Although back in 2019, McCaffrey's 89.9 (No. 6) Run Blocking Efficiency helped boost his production as an elite back.

Crazy how efficient Christian McCaffrey performed even though it's a small sample the past 2 seasons from an EPA standpoint. Poor run blocking efficiency for both CMC and Mike Davis last year.

Curious to see how Chuba Hubbard fares but could be more of the same. pic.twitter.com/o4sdOQiGDg

With Christian McCaffrey suffering several injuries that derailed his 2020 season, veteran Mike Davis stepped up for an average of 13.8 (No. 18) fantasy points per game. Last season, the Run Blocking Efficiency for both McCaffrey and Davis ranked poorly with 18.7 (No. 66) for CMC and 15.1 (No. 70) for Davis.

Mike Davis created yards and ranked highly in the efficiency metrics last year. Although Davis's 4.5 (No. 48) Yards Per Touch looked mediocre, he ranked 3rd with a 32.1-percent Juke Rate, 8th with 700 Yards Created, and 10th with 3.13 Yards Created Per Touch. It's positive to see that Davis overcame the poor Run Blocking Efficiency by creating and evading tackles.

What to Expect From Chuba Hubbard?

The fourth-round rookie in Chuba Hubbard smashed in 2019 with over 2,000 rushing yards and 21 total touchdowns. Hubbard also earned a career-best 8.6-percent target share, which indicated he possesses pass-catching skills. 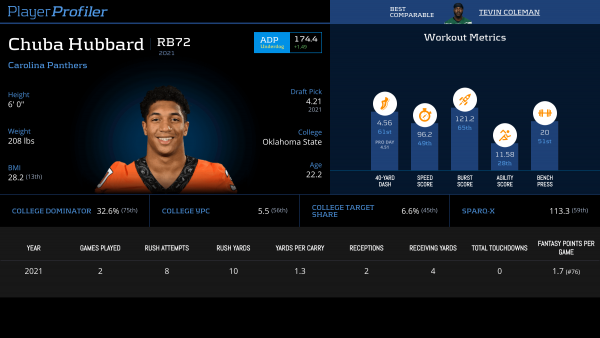 Unfortunately, Chuba Hubbard didn't pop off the page with any workout metrics. Hubbard's 96.2 (49th-percentile) Speed Score, 121.2 (65th-percentile) Burst Score, and 11.58 (28th-percentile) Agility Score look awful. However, the Panthers showed the willingness to give Hubbard opportunities without Christian McCaffrey on the field in the preseason and Week 3 when McCaffrey left.

Context matters, and thus, the workout metrics provide only a few data points that we should take with a grain of salt as Chuba Hubbard dealt with injuries throughout the 2020 college season. Given the poor Run Blocking Efficiency for Christian McCaffrey and Mike Davis the past two seasons, it's safe to expect Hubbard to have poor metrics there too.

Dwain McFarland of Pro Football Focus tweeted out the utilization for Hubbard after McCaffrey exited. Dwain notes Hubbard's an RB2 with RB1 upside.

There's no replacing McCaffrey's production on the waiver wire. As Mike Tagliere notes in his Boom, Bust, and Everything in Between on Running Backs, McCaffrey produced RB1 stats in 82.9-percent of his games over the past three years. That's ridiculous. I'll miss this offseason series by Tags plus the Weekly Primers full of in-depth and actionable data and advice.

In the next waiver wire period, Chuba Hubbard sits atop the list. Look what fantasy managers spent on Elijah Mitchell and add additional FAAB because Hubbard's role seems more locked in than any 49ers running back. Whether you roster Christian McCaffrey or not, it's worth throwing a large chunk of FAAB on Hubbard. However, none of these options will replace even half of McCaffrey.

You might look towards Kenneth Gainwell of the Eagles with some involvement in the rushing and receiving game early on. Gainwell garnered a 37.5-percent (No. 41) Opportunity Share and 10.7-percent (No. 26) target share amongst running backs. It's a small sample of two games, but a positive sign that Gainwell received snaps and opportunities compared to Boston Scott's 0-percent Snap Share. However, the question involves the passing plays for the Eagles running backs with 29.5 (No. 35) Team Pass Plays Per Game. Let's see if the double-digit target share for both Miles Sanders and Gainwell keeps up with a larger sample of games.

Outside of Corey Davis in Week 1, the Jets' offense hasn't looked great. Last week, the Jets faded out Tevin Coleman and involved both Ty Johnson and rookie Michael Carter. I expected Johnson to take on a pass-catching role, but that hasn't occurred quite yet through two weeks. Although Johnson doesn't jazz us up, let's see how this pans out. Johnson isn't a must-have running back by any means, even if Michael Carter misses time.

One of my favorite advanced stats from Week 2 involves Peyton Barber and Derrick Henry. The big dog in Tennessee amassed 144 yards after contact to account for 79.1-percent of his total yardage. That boosts Henry into 2nd in yards after contact behind Nick Chubb in running backs with at least ten attempts.

Now we're in the stashing category with minimal usage. Devontae Booker barely touched the field or the football so far with 26.8-percent (No. 58) Snap Share and 19.5-percent (No. 60) Opportunity Share. However, Booker backs up one of the most talented running backs in the league. In deeper leagues, it's worth stashing Booker, assuming you have the bench space. However, the offensive line could remain an issue with only 1.4 yards before contact for Saquon Barkley and a -1.8 (No. 51) Run Blocking Efficiency through two weeks.

Many know my love for Myles Gaskin heading into the 2021 season, given the all-around profile as an underrated yet uber-productive college back. Unfortunately, the Dolphins' offense stumbled out the gate. Gaskin shared touches and opportunities with Salvon Ahmed and Malcolm Brown. However, prioritize Ahmed as a stash instead of Brown.

Although Ahmed garnered a measly 27.9-percent (No. 54) Snap Share and 30.6-percent (No. 47) Opportunity Share, the Dolphins showed the willingness to give Ahmed opportunities when Gaskin missed time last season. Losing Tua Tagovailoa to a rib injury that will sideline him for at least three games likely negatively impacts the Dolphins offense. That said, the offensive efficiency will dip, and that makes Ahmed a bit less exciting.

First, we have Derrick Henry reaching career highs in both targets and receptions. Then we have Tennessee establishing the run even when playing from behind. Henry already earned over a third of his 2020 career-high in targets (31) through two games. We also have Jeremy McNichols seeing the field with a 25.7-percent (No. 56) Snap Share and a minor pass-catching role with 50 (No. 19) receiving yards with a measly 13.7-percent (No. 65) Opportunity Share.

For reference, McNichols totaled 55 (No. 87) receiving yards last season through 16 games played. With Darrynton Evans on injured reserve, stash McNichols in case Henry misses time. Since we've seen a bit more pass-catching opportunities for the Titans running backs in our small two-game sample, it only adds to the optimism.

Everyone wants to say "buy low" on Saquon Barkley, but unless a manager goes in full panic mode after two weeks (which we shouldn't), then it's unlikely folks will have an opportunity to trade away Brandin Cooks or D.J. Moore plus a player for Barkley. That said, we'll provide fantasy managers with a few options to acquire via trades that should end up reasonable.

The rookie headlined my running back advanced stats review up on RotoViz due to Javonte Williams popping on several of the advanced stats through two weeks. Williams ranked highly with 5.4 attempts per broken tackle with the 3rd highest Evasion% at 22.2-percent behind Josh Jacobs and Nick Chubb. 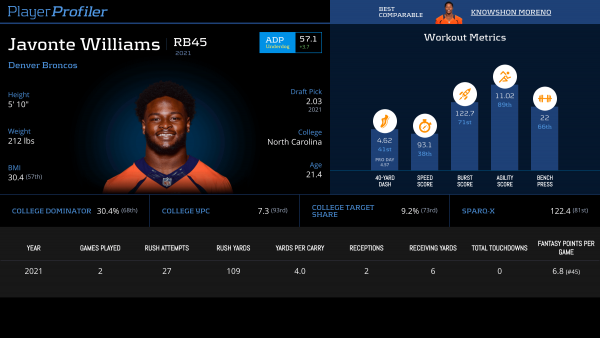 Seeing the high evasion rate aligns with the 11.02 (89th-percentile) Agility Score and in good company through two weeks. Surprisingly, Melvin Gordon performed well and efficiently with 9.7 (No. 6) fantasy points over expectation (FPOE). However, Williams could take over in the second half of the season if Gordon misses time or slows down.

Contrary to Javonte Williams, we have a "buy high" candidate in Ty'Son Williams. Sure, he'll share opportunities with other Ravens backs in Latavius Murray and Devonta Freeman. However, Williams should continue the efficient production as long as he's healthy. With the run heaviest team in the league evidenced by the 37.5 (No. 1) Team Pass Plays Per Game, Williams garnered a 54.9-percent (No. 26) Opportunity Share with a surprising 11.8-percent (No. 18) target share. 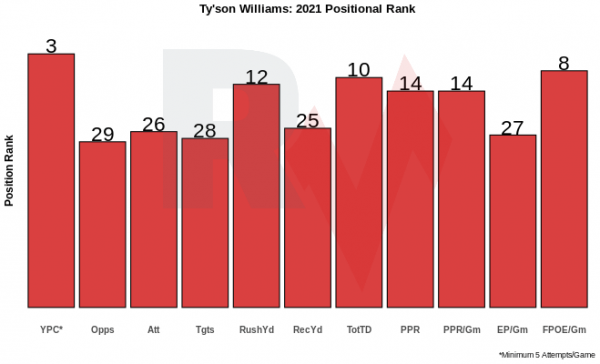 For reference, Gus Edwards earned a tiny 3.4-percent target share, and J.K. Dobbins finished at 6.6-percent last season. It's a small two-game sample, but the efficiency remains high with a 121.8 (No. 1) Run Blocking Efficiency for Ty'Son Williams. Assuming health, Williams could produce as an RB2 given the efficiency and potential pass-catching opportunity in a run-heavy offense.

If we found a running back on an above-average offense that ranked 3rd in receiving yards, that would probably excite fantasy managers. That running back involves Kenyan Drake, who caught ten of 11 targets for 105 receiving yards. Last season with the Cardinals, Drake took on the early-down grinder type role that lacked many pass-catching opportunities with only 31 (No. 38) targets. For context, Drake earned an average of 63 targets per season from 2017 to 2019.

Fantasy managers likely won't have to give up much for Drake via trade. A few players near Drake in my 1/2 PPR rest of season rankings include Melvin Gordon, Tyler Boyd, Laviska Shenault, and D.J. Chark. If Jacobs' toe injury lingers, look for Drake to move into a weekly RB2 role.