The Curious Case of Trea Turner

I'm not sure there is a more intriguing player in fantasy baseball this year than Trea Turner. The casual fan may just be finding out about the talented Nationals shortstop, while the sharps have been patiently waiting for him to make his mark in fantasy baseball. This year he's set to make his mark and by the way he's being drafted in early mocks, that mark may be bigger than the "skid" variety of mark that you would find in the pants of Walking Dead fans watching this season's premier episode. With Turner still being a relatively unknown player, it's important that we take a very close look at him so we can make as educated decision on where to select him in drafts. So without further ado...let's take a peek! 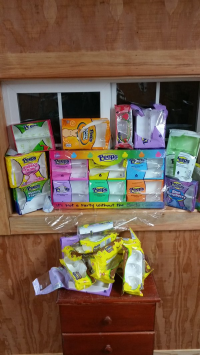 Howard Bender of the Fantasy Alarm runs the Mock Draft Army so experts and fans can draft together and compile ADP data. He also eats a lot of Peeps on Easter. A lot...

As you can see here, there are some varying thoughts on where Turner should be drafted. Two things stick out to me here. First, people aren't quite sure where they should take him. If you take a look and average the sites, his average draft slot is roughly in the mid-to-late second round overall. Especially with CBS, he's been taken with a pick of eighth overall, but yet he's fallen to 49 in another draft. That's a big variation.

Secondly, his average draft position in the NFBC really stands out to me. The NFBC is where some of the top players in the world play and I tend to look at their ADPs very closely. He is being drafted higher there on average than any other site listed, and that makes me think the other sites haven't caught up yet in knowing where he should be drafted. When I see his ADP at 22 on CBS and 25 on FoxSports, but yet he hasn't fallen below 18 in the NFBC, I take notice. Why is he going higher on the NFBC than he is on most other sites? Well, let's take a look at his hit tool and see what we can expect from him this season.

Last season, Turner made was able to make contact with astounding success. To begin, his batting average was a whopping .342, and that was good for third among players with at least 300 plate appearances. Only DJ LeMahieu and Daniel Murphy topped the youngster. He has shown good average during his three years in the minors, but hitting .342 was quite the feat. Can he maintain it? Unfortunately, the answer is likely no.

Turner was able to have a fantastic batting average, but that was aided by a BABIP of .388. I know some of you are saying, "What in the hell is BABIP"? Well, BABIP is Batting Average on Balls in Play. This measures how often hit balls that don't go for a home run (in play), fall for a hit. League average for BABIP is around .300. Higher BABIPs can mean a few things, but there are two primary reasons that stick out to me. If a player is consistently above league average, it shows they make good contact and can spread the ball around. If they have a high BABIP that's an outlier to their previous seasons, that can mean they were a little lucky and more balls than normal dropped in for a hit. Among those players mentioned with at least 300 plate appearances, Trea Turner would have been tied for second in the league with his .388 BABIP. I think luck had a decent sized role last season. That doesn't mean I expect him to fall off a cliff this year, but I see a regression in his .342 batting average on the horizon.

How far will his batting average drop? Well, he still has good hand speed and has a great, natural swing. He's also good at making solid contact as evidenced by his almost 35% hard contact rate. The tools are all there. I think a batting average of .310-.315 is a real possibility and if you're in a points league or league that rewards doubles and triples, Turner's speed should allow him to finish with a very high number of extra base hits this year, as well.

Trea Turner is not known to be a power hitter. In his three season in the minor leagues (2014-2016), Turner had a grand total of 19 home runs in 1,228 plate appearances. That lack of power didn't stop him from belting 13 bombs in only 324 plate appearances in 2016 for the Nationals. That would have put him on pace for 25 or 26 home runs over the course of the season.

I see two different outcomes for Turner this season in regards to power. Some players can develop power as their body and swing matures, so there is a possibility that Turner will continue on from last year and be a perennial 20 home run guy. There is also the possibility that he is the player that everyone thought he would be, and he would be more of a 15 home run per year hitter. I'm leaning towards the second option. While he makes good contact, he's more of a ground ball/line drive hitter, and I'm not sure he's going to potentially sacrifice his contact/batting average for adjusting the angle of his swing to add more home runs. My prediction to go along with his .315 batting average is that he will smack around 15 dingers in 2017.

It looks like Turner will likely hit towards the top of the Nationals lineup this year which should help with his fantasy value. He primarily hit second last year, and with his hitting ability and speed, I can see that becoming a permanent home for him. The Nats have a solid lineup and with guys like Daniel Murphy or Adam Eaton potentially hitting in front of him,  he should have an opportunity to drive in 70 or so RBIs. If you want to lock down the steal category early, Turner can you accomplish your goal.

Where Turner will really be able to help your fantasy team, will be in the speed categories, runs and stolen bases. Turner has excellent base running ability and with his ability to get on base, paired with an excellent hitters behind him, I think there is a real possibility of him crossing home plate 100 times.

In roughly half of a season in 2016, Turner was able to steal 33 bases. Fangraphs has stats on almost every possible thing, so if you're a geek like me, feel free to dig in. One of them is called Speed Score (Spd) and that rates a player on their speed and base running ability. This measures things like stolen base percentage, frequency of stolen base attempts, percentage of triples and runs scored percentage. Real nerdy stuff that I really dig! Anyways, an excellent score would be 7.0, great is 6.0, above average is 5.5 and so on down the line. So what was Trea Turner's Speed Score last season? It was 8.7! Among players with at least 300 plate appearances, Turner would have finished second behind only Dee Gordon, who had an 8.8. The guy can move and is a very smart base runner. I can see him finishing as one of the leaders in the league in this category and netting 50 or more steals in 2017.

So to wrap things up and put a bow on it, let's take a look at my final projections for him and decide where would be a good spot to select Turner on draft day.

Everyone loves a good comp, so let's take a look at a player that I think will put up similar stats to Trea Turner this season.

Turner has a ton of upside, but being so young and unproven, he also poses a little bigger risk than a proven player. Let's take a look at the hitters I would feel more comfortable taking in front of him this season.

Here are the pitchers I would likely draft in front of Turner.

Finally, here are the players I would consider in the same tier as Trea Turner and could go either way.

So there are 15 players that I would definitely draft before Turner and another seven I would say is a very close call. That would put him in the range of being the 16th-25th player off the board. That makes him a solid, mid-to-late second round pick. If you think his power would continue on from last year, he could bump up to an early second round pick if you feel so inclined. With a relatively high floor in my opinion, I would feel very good about drafting Trea Turner as one of the anchors for my fantasy baseball team in 2017 in the second round.